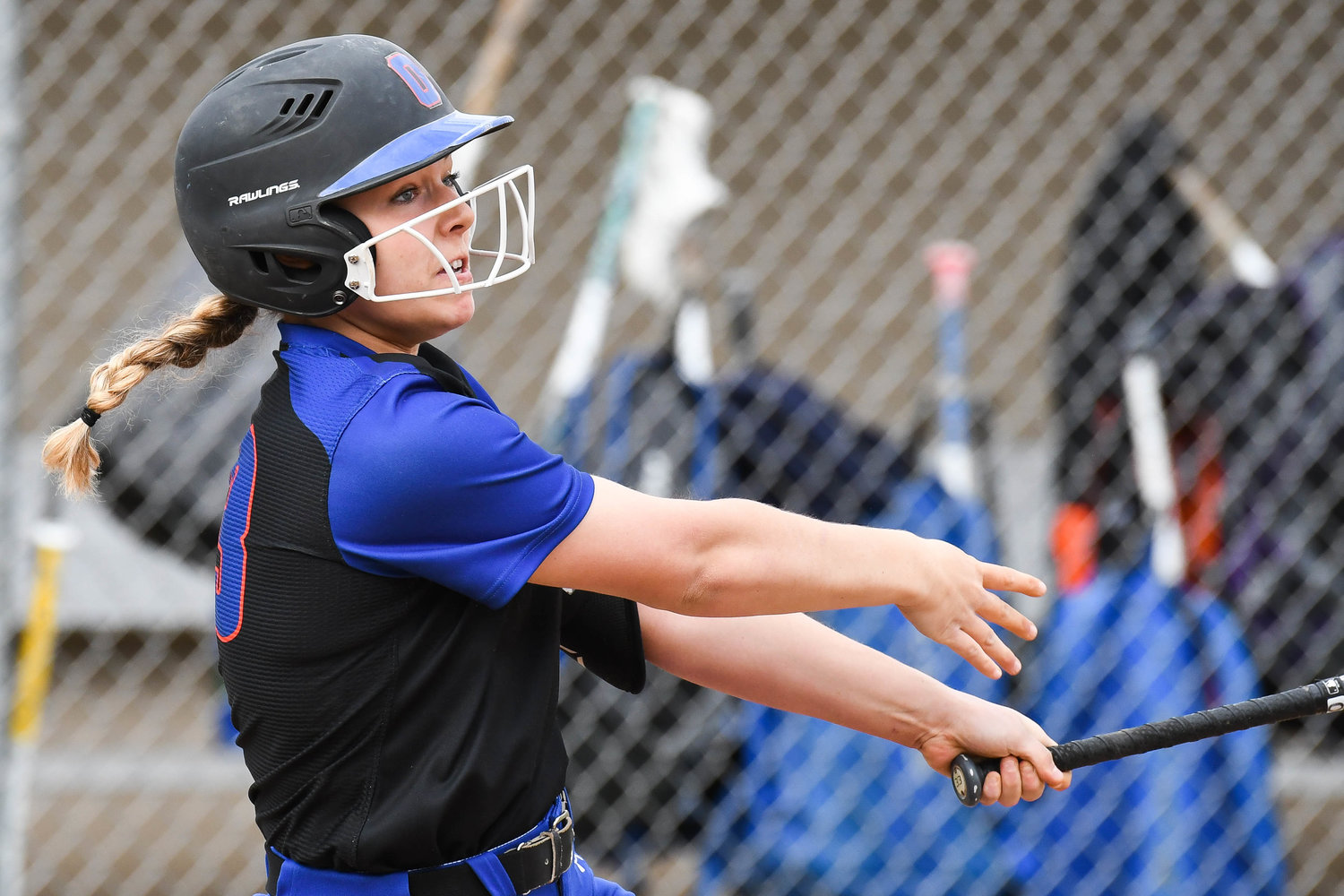 PUTTING A CHARGE INTO ONE — Oneida’s Olivia Friend drives the ball for a double during the game against Notre Dame on Wednesday in the team’s 5-1 win. She homered in the team’s 5-3 win at home against Cicero-North Syracuse Thursday.
(Sentinel photo by Alex Cooper) 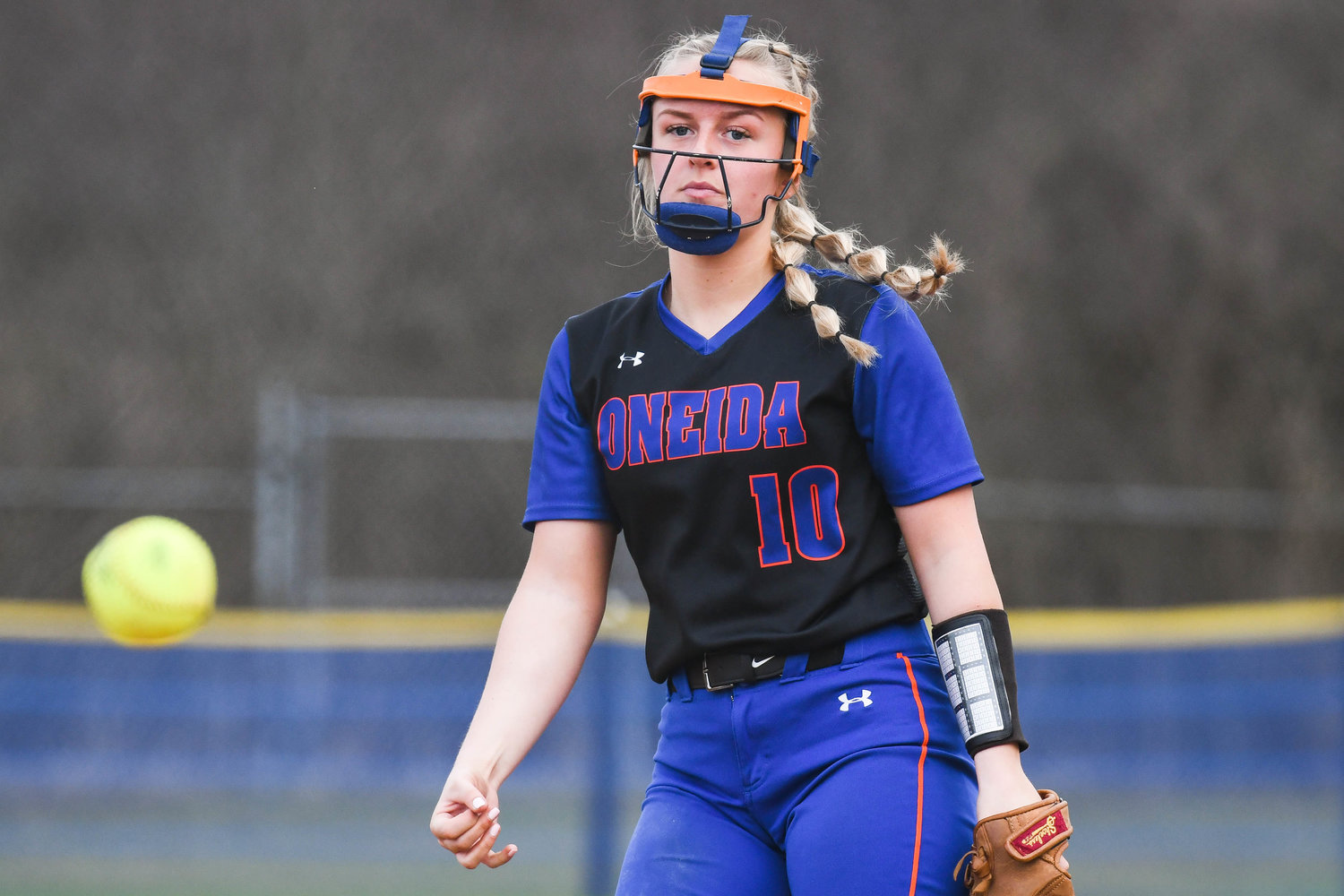 DELIVERING TWO WINS — Oneida’s Kerrigan Crysler delivers a pitch during the game against Notre Dame on Wednesday. Crysler pitched the team to a 5-1 win then to a 5-3 victory over Cicero-North Syracuse the next day.
(Sentinel photo by Alex Cooper) 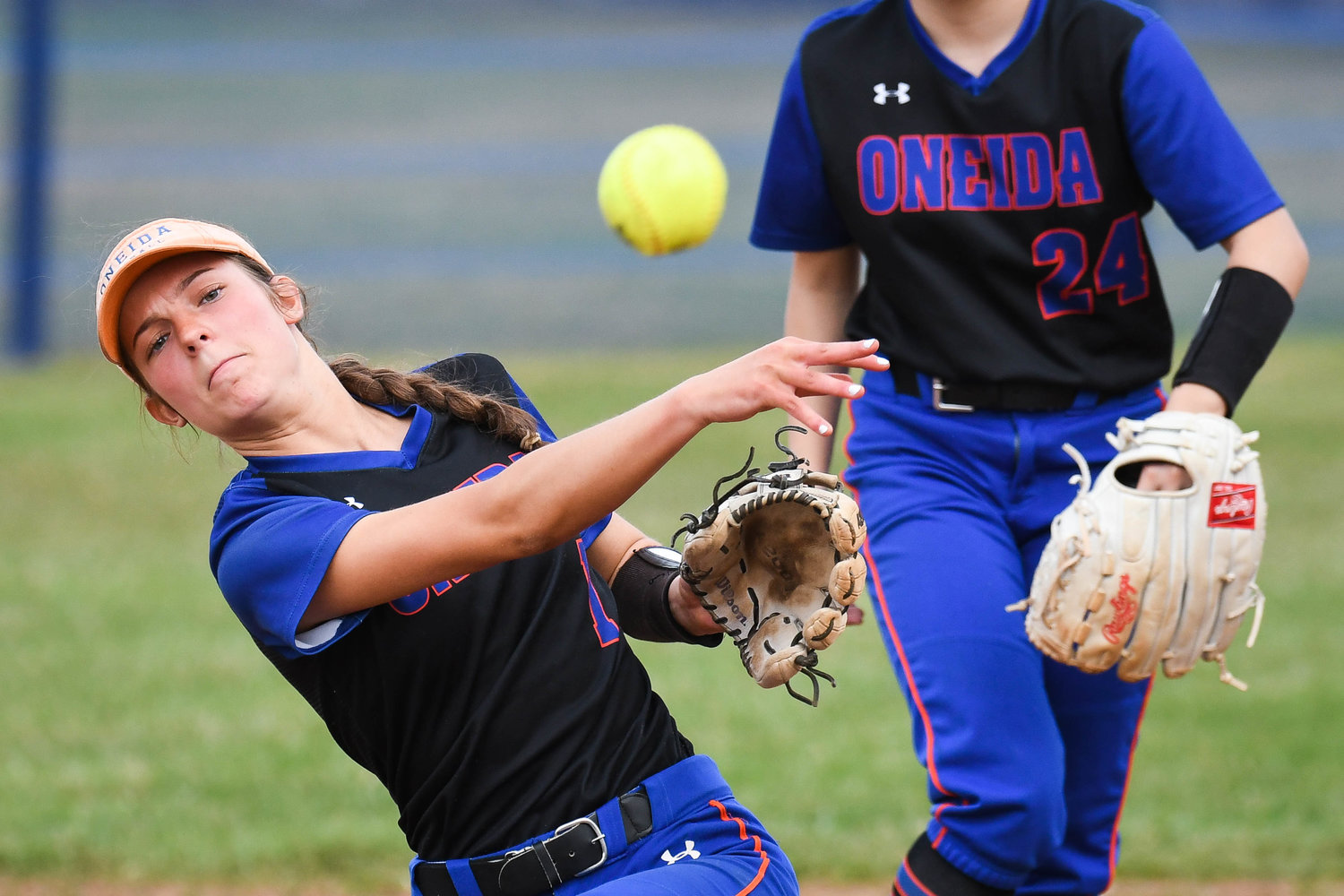 FIRING TO FIRST — Oneida senior shortstop Kaylin Curro throws the ball to first base during the game against Notre Dame on Wednesday. Oneida won 5-1 then beat Cicero-North Syracuse 5-3 at home the next day.
(Sentinel photo by Alex Cooper) 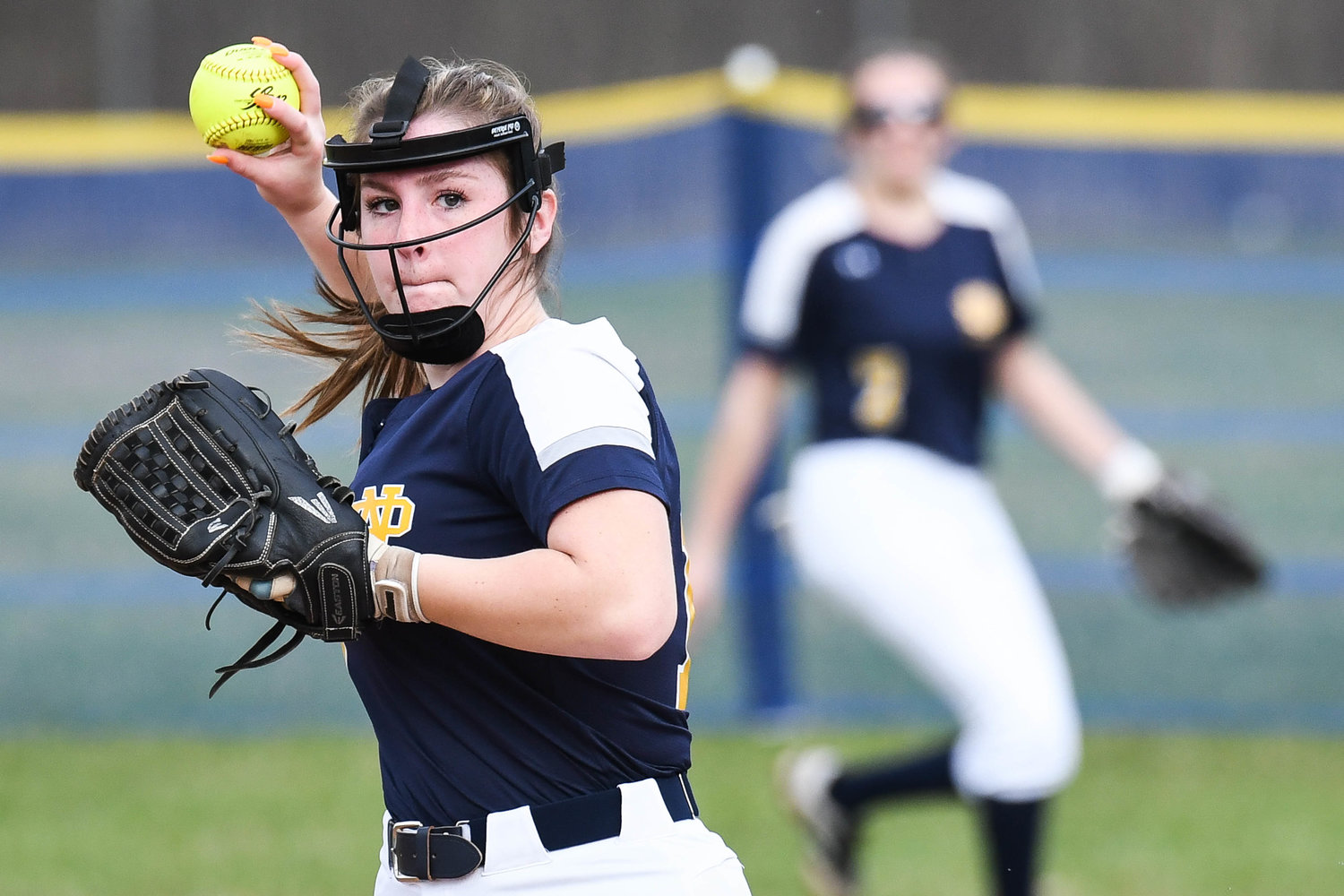 ACROSS THE DIAMOND — Notre Dame's Sam Paparella sets herself for a throw to first base during the game against Oneida on Wednesday. The Jugglers lost 5-1.
(Sentinel photo by Alex Cooper) 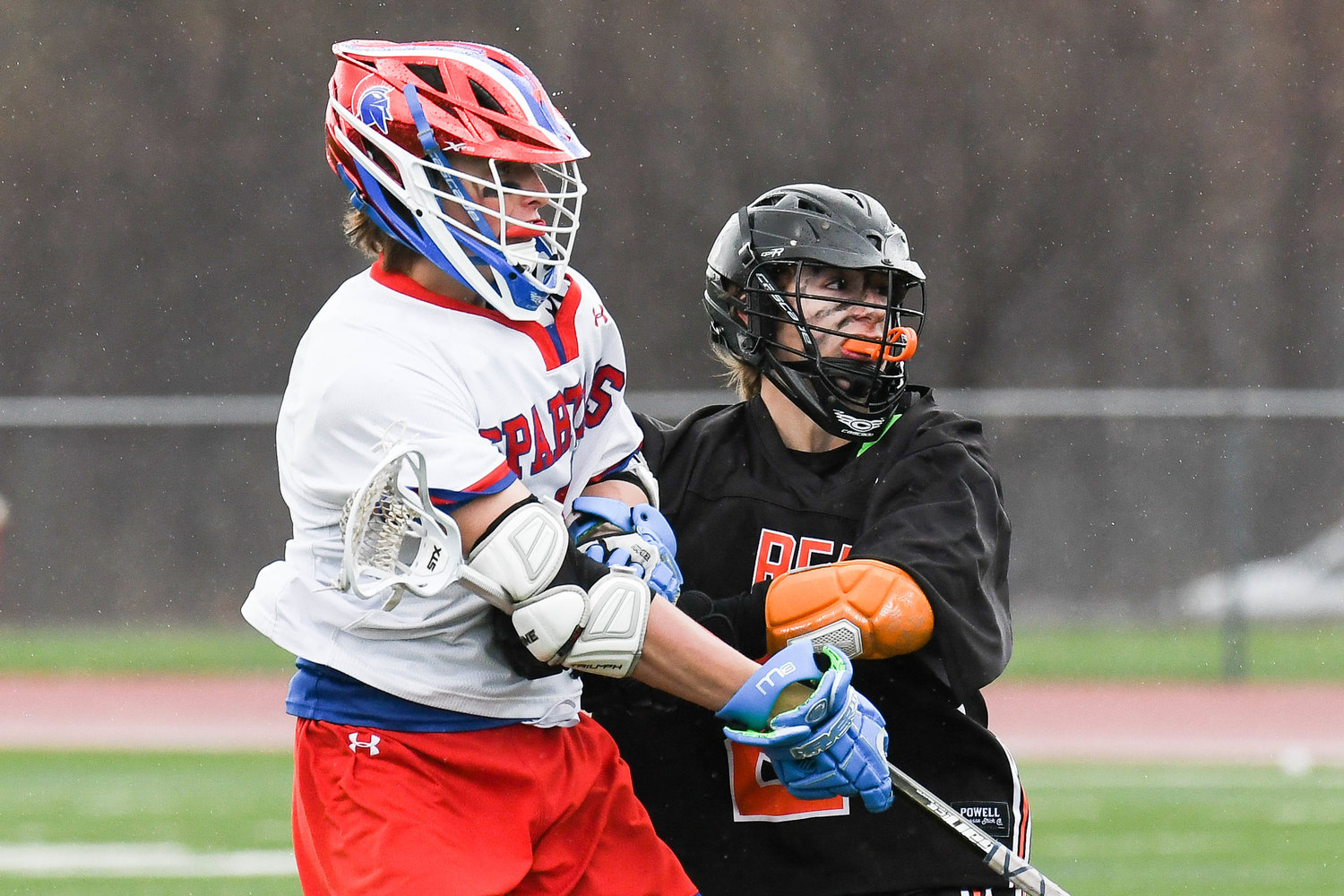 On Wednesday, Oneida grabbed a 2-0 lead in the top of the first then built it up to 4-0 in the third. The team led 5-0 after five. The Jugglers got a run in the bottom of the seventh but it was not enough.

Thursday, the team scored a run in the first and another in the second but the Northstars responded with two in the third and another in the top of the fourth to take a 3-2 lead. Oneida immediately scored two runs to lead 5-3, which is how the game would end.

Kerrigan Crysler went the distance in the circle for Oneida to earn the win, allowing three runs, two of them earned. She gave up six hits and didn’t walk a batter. She also struck out five.

On offense for Oneida, Olivia Friend had a two-hit game with a home run, two RBIs and a run scored. Kaylin Curro had a hit, run and RBI. Mikah Albro had a hit, walk and run scored. Jillian Honness scored twice.

Oneida is now 2-0 on the season and will host Baldwinsville at 5 p.m. on April 22 in non-league play.

The Whitesboro softball team defeated Fayetteville-Manlius 14-4 in a home game that was called after six innings due to rain.

The Warriors scored seven in the second inning to take an 8-1 lead. They added six in the fourth to make it 14-3.

Courtney Robinson went all six innings for Whitesboro as the winning pitcher. The lefty allowed four earned runs on six hits and four walks. She struck out two.

Leading the Hornets’ offense was Megan Woodbridge with a single, two doubles and a run scored. Gracie Bishop had a single, double, RBI and run.

Paige Graves took the loss for Fayetteville. She went 1 2/3 innings and allowed six runs, three of them earned.

Mateo Ripa led all scorers with four goals for the Spartans. Dan Friedel and Sawyer Kramer each had hat tricks, with Friedel also piling up four assists. Gavin Williams had two goals and an assist, while Wyatt Cull and Caden Kramer tallied two goals each. Jarrett Sherman also scored.

For RFA, Seth Hammon scored twice. Max Hunt and Robert Fanning each scored once, and Hunt had an assist as well. Carmen Orton and Matt McCormick each collected an assist.

In net, the Spartans split time between Gabriel Cull, who made six saves, and Walker Williams, who stopped two shots.

RFA's Braeden Sturtevant was in net for the Knights. He stopped 15 shots.

New Hartford was scheduled to play today at Saratoga Springs.