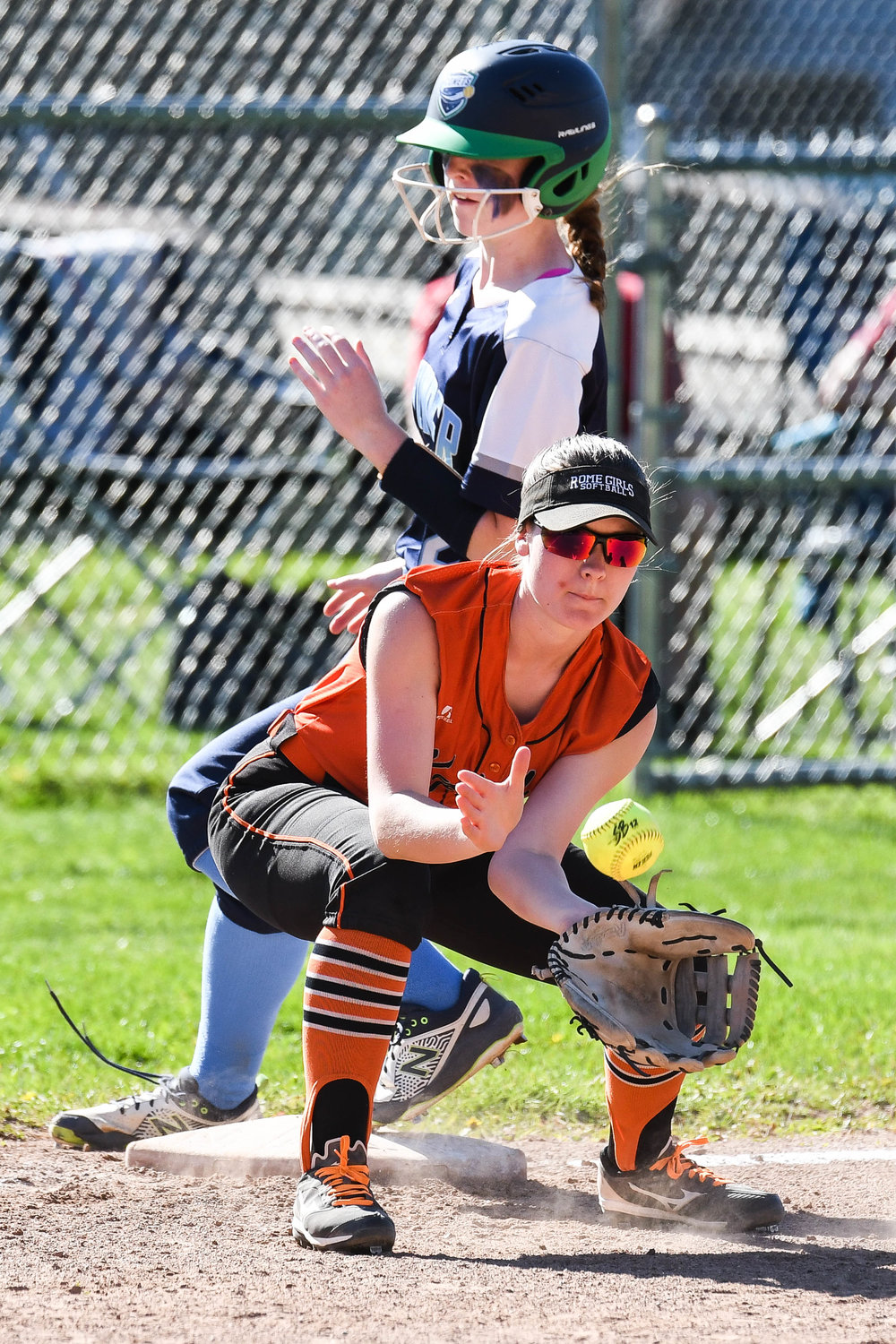 The Oneida softball team held off a late rally by New Hartford for a 7-5 win at home Monday in the Tri-Valley League. It was the Spartans first league loss this season.

Oneida scored four runs in the fifth to extend a one-run lead into a 7-2 score. New Hartford got three runs in the top of the seventh but came up short.

Kerrigan Crysler got a complete game win in the circle, allowing five runs, three of them earned, on nine hits and a walk. She struck out nine.

Sienna Holmes also threw a complete game, allowing seven runs, three of them earned. She gave up 12 hits and walked one while striking out five.

For New Hartford, Taylor Raux had two doubles and drove in four runs.

Oneida improves 6-3 overall and 5-1 in the league. The team hosted Utica Proctor in the league Tuesday. Results were not available at press time.

New Hartford, 7-1 in the league, hosted Camden in the league Tuesday. Results were not available at press time.

Brooke Musch was 3-for-3 with a triple and home run, scored twice and drove in three as Camden beat Whitesboro 6-4 at home in the TVL Monday.

Ryleigh Johnson doubled twice, scored and drove in a run for the Blue Devils. Kaitlyn Findlay and Katie McCarthy each had two hits and scored a run.

For Whitesboro, Adde Cook went the distance in the circle, allowing six earned runs on 12 hits and a walk. She struck out three.

Alexis Stivali doubled, scored and had an RBI for the Warriors. Juliana Pepperine had a hit and drove in a run.

Camen, 11-2 overall and 6-1 in the league, visited New Hartford in the league Tuesday. Results were unavailable at press time.

Whitesboro traveled to Vernon-Verona-Sherrill in the league Tuesday. Results were unavailable at press time.

The Golden Knights took game one 11-0. HP scored three in the second, five in the fourth and three more in the fifth.

Hannah Rossi allowed one hit and walked one while striking out 15 for HP.

In game two, Clinton struck for two runs in the first and two more in the second, but HP responded with four to tie in the top of the third. The Knights then scored in each of the next three innings to go up 9-4.

Statistics for Clinton were not submitted.

HP visits Little Falls at 7 p.m. Wednesday in the league.

Clinton was at Sauquoit Valley Tuesday in the league. Results were not available at press time.

The Oriskany softball team got a 19-6 win at home over Morrisville-Eaton Monday in the Center State.

Oriskany scored five in the second and six in the third to take a 12-3 lead.

At the plate for Oriskany, Megan Wright was 5-for-5 with two doubles. Ashley Burnop was 2-for-4 with a home run. Brook Matys was 4-for-5. Juliette Tagliaferri was 3-for-5 with a double. Jordan Carlo was 2-for-3 with a triple.

In the circle, Tagliaferri was the winning pitcher. In a complete game effort, she gave up seven hits with no walks and struck out 10.

Aspen Koehl took the pitching loss. She was 3-for-4 with a double at the plate and Abby Jacobs had two hits.

Oriskany travels to Town of Webb for a league game at 4:45 p.m. Thursday.

Ella Trinkaus got the win, going four innings and giving up five runs, two earned, on 11 hits and a walk. She struck out eight.

Erin Trinkaus was 4-for-4 with two runs and two RBIs for the Jugglers. Maggie Trinkaus tripled and homered, scored twice and drove in two. Lily Comenale, Sam Paparella and Bella Roberts had a pair of hits each.

Statistics for CVA were not submitted.

Notre Dame travels to Oneida for a 4:15 p.m. start Monday in the league.

CVA played at RFA in the league Tuesday. Results were not available at press time.

Westmoreland runs away from Herkimer

The Westmoreland softball team defeated Herkimer 10-1 Monday on the road in the Center State.

Samantha Ferguson was the winning pitcher. At the plate, she had two doubles on the day. Teammates Lily Mazur, Autumn Millington, Sami Wilson and Jenna Tyczynski also doubled.

Jenna Riesel took the loss in the circle. Dani Gilbert doubled twice for the Magicians.

Westmoreland visited Dolgeville on Tuesday. Results were not available at press time.

HP’s Jake Olearczyk led the field with a par 36. Also scoring for the Golden Knights were Reed Schultz (45), Kenny Aucompaugh (51) and Jayson Masters (64).

The Bulldogs’ Trevor Nelson was the team’s medalist with a 51. Jeremy Riggles shot a 52, Jaxon Magnusson had a 58 and Sean Hyde shot a 64.

HP improved to 4-2 and plays against Oriskany at Crestwood Golf Club in the league at 3:30 p.m. Wednesday.

RFA girls golf to another win

The Rome Free Academy girls golf team improved to 6-0 on the season with a 215 to 288 win over Utica Proctor on the road at Eagles Golf Club in the Tri-Valley League Monday.

RFA, 6-0 overall and 4-0 in the league, will play against New Hartford and Vernon-Verona-Sherrill at VVS’ home course of Oneida Community Golf Course at 3:30 p.m. Thursday in league play.

Proctor will play at 3:30 p.m. Thursday in the league against CVA at its home course of Doty’s Golf Course.

The Camden girls golf team defeated CVA 213 to 269 on Monday at home at McConnellsville Golf Club in the TVL.

Camden’s medalist was Lainie Libertaore, who shot a 39.

Individual statistics for CVA were not submitted.

Oriskany’s Nick Deriso and Jason Reid led the team with a score of 44 each.

Jaydon Dietz led the Marauders with a 38.

Winning in singles in the first match were David Fenner, Evan Lyga and Bryan Cho.

The winning doubles pairs in the first match were David Berg and Leo Padula and Kenneth Kowalczyk and Deen Kaakour.

In the second match, Lyga, Berg and Manny Derima won in singles.

The winning pairs in the second match were Fenner and Padula and Kaakour and Kowalczyk.

The Oneida boys tennis team swet past VVS at home Monday in the TVL.

In doubles, the winning pairs were Spencer Ingmire and Ethan Schmidt and Jack Capotosto and Robert Paul.

Oneida is now 9-1, 5-0 in the league, and played against host Camden in the league Tuesday. Results were not available at press time.

VVS, 5-4 and 2-1, played at Central Valley Academy Tuesday in the league. Results were not available at press time.

The RFA boys tennis team got a 3-2 win at Camden in the TVL Monday.

RFA’s Philip Poceicha won in singles. The Black Knights won a doubles match with the duo of Dylan Anderegg and Chase Ferary. The team also took a doubles win by forfeit.

Camden, 0-8 and 0-3, was at Oneida Tuesday in the league. Results were not available at press time.

Winning in singles for HP were Jeffrey Dewar and Carter Williams.

The doubles duos to win for HP were Dylan McGuire and Christopher Kelly and Daniel Carhart and William Zimmerman.

HP is now 10-1 overall and 4-0 in the league. The Knights traveled to Marcellus Tuesday in non-league play. Results were not available at press time.

The Clinton boys tennis team lost a pair of matches to Hamilton Monday in the Center State, 4-1 and 4-1. The Warriors bounced back with a 3-2 win over visiting Cooperstown Tuesday.

Monday, Izzy Marcus won a singles match for Clinton in the first match. In the second match, the Clinton win went to doubles pair Marcus and Jason Rivera.

The Warriors are now 3-8 overall and 1-4 in the league. They host Mount Markham in the league at 4 p.m. Wednesday.