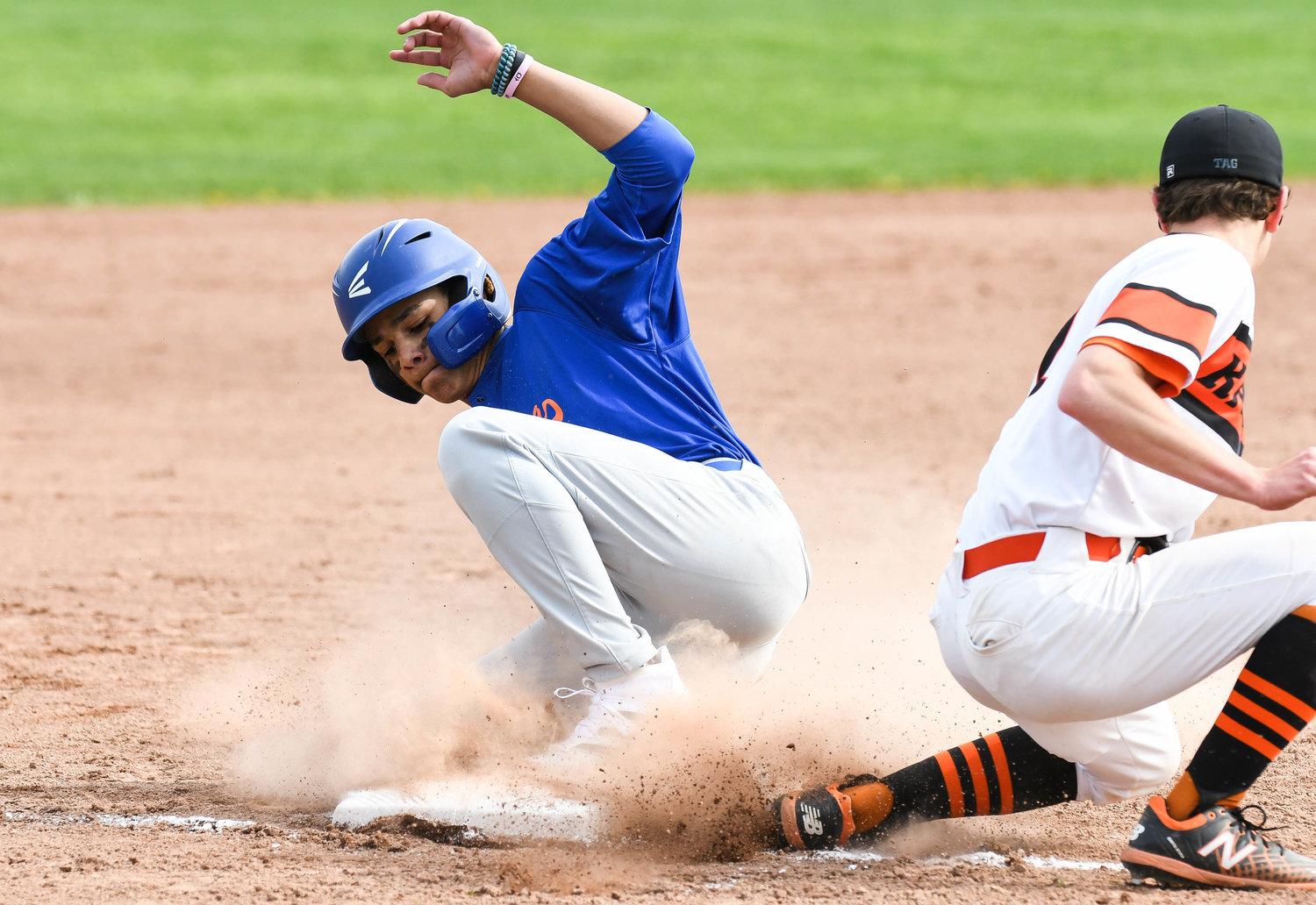 Oneida baserunner Andrew Murray slides safely into third base during the game against Rome Free Academy on Thursday. Oneida won 5-4 in a comeback. Murray had two doubles, two runs and an RBI. He also earned the save.
(Sentinel photo by Alex Cooper) 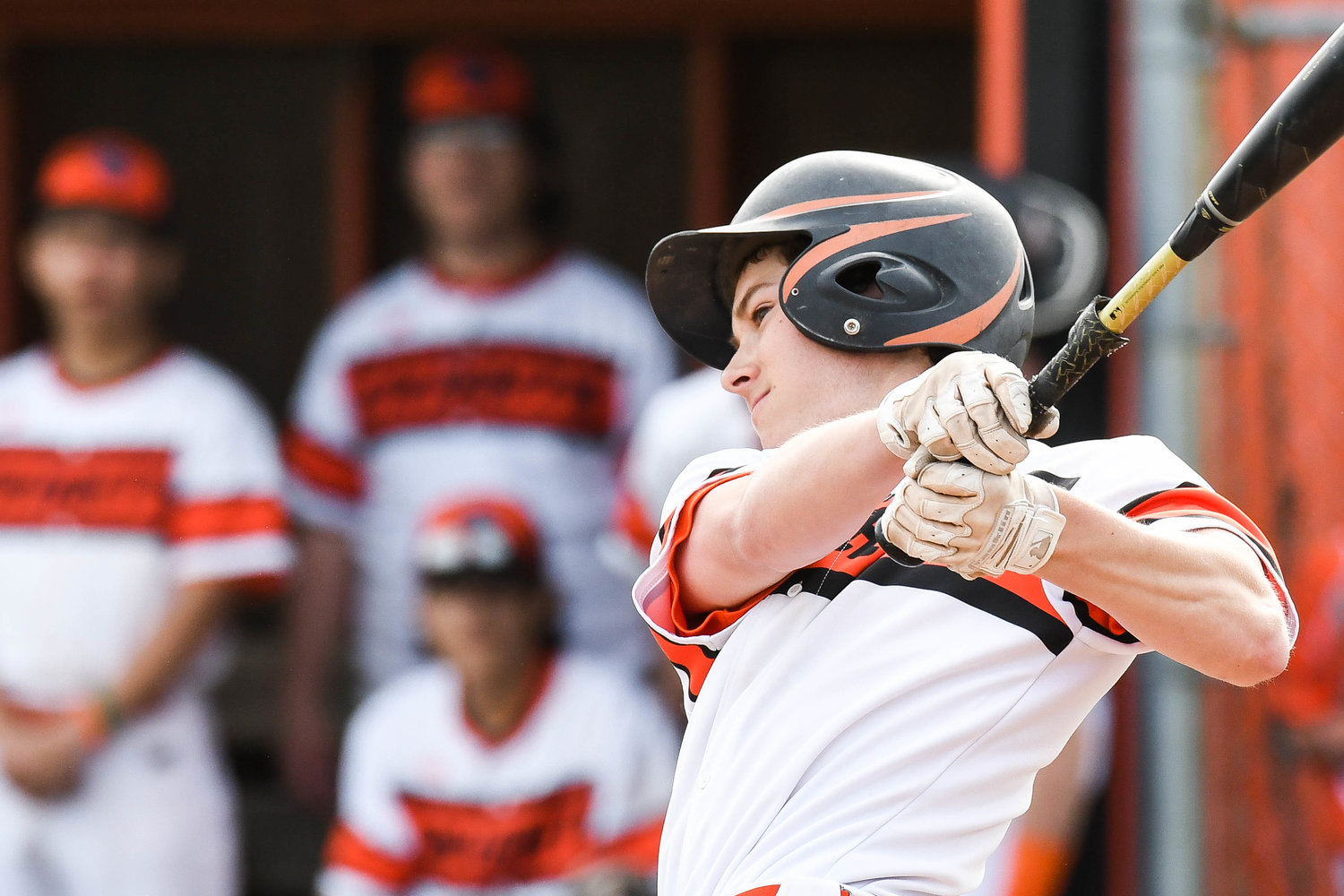 Rome Free Academy player Jack Anderegg swings away during the game against Oneida on Thursday. Oneida scored two runs in the top of the seventh for a come-from-behind win 5-4 in the Tri-Valley League.
(Sentinel photo by Alex Cooper)
Previous Next
Posted Saturday, May 7, 2022 12:37 pm

Oneida scored two runs in the top of the seventh for a come-from-behind win 5-4 against Rome Free Academy Thursday in the Tri-Valley League.

RFA got a 1-0 lead in the first inning. Both teams scored three in the fifth. Trailing by a run in the seventh, Oneida scored two then held RFA off the scoreboard in the bottom of the inning for the win.

Gavin Sweet started for Oneida, allowing four earned runs in six innings on seven hits and two walks. He struck out five. After he threw his last pitch, the team rallied to take the lead. He earned the win after Andrew Murray came in to pitch a scoreless seventh with two strikeouts. Murray earned a save.

Sweet also contributed on offense, with a single and a home run, two RBIs and two runs scored. Murray had two doubles, two runs and an RBI.

Mike Flint started for RFA. He went 4 1/3 innings and allowed three earned runs on four hits and three walks. He struck out six. Jake Premo came on in relief and went 2 2/3 innings, allowing two earned runs on two hits and two walks with four strikeouts. He took the loss.

The Clinton baseball team gave up a late lead, tied it in the seventh inning then won 6-5 in the 10th over host Sherburne-Earlville Thursday in the Center State Conference.

Ben Menard was 3-for-6 with two doubles, two RBIs and a run for Sherburne. Garrett Fleming had two hits and two RBIs with a run scored.

Derick Miller took the loss in relief, allowing a run on two hits in three innings.

Clinton plays a game at Doubleday Field in Cooperstown at 5 p.m. Saturday against an opponent to be announced.

The New Hartford offense scored four runs in the fifth inning while pitcher Zach Philipkoski went the distance in a 4-1 win at home over Utica Proctor in the TVL Thursday.

Philipkoski allowed an earned run in the top of the fourth, but that was it. He gave up three hits and issued no walks in seven innings. He struck out two.

Parker Giruzzi took a tough loss for Proctor, going 5 2/3 innings while allowing four unearned runs on six hits and two walks. He struck out five. Angelo Podagrosi got the final out without a hit or run. The defense committed four errors behind them.

Will Gall and Nick Perrotta had two-hit days for the Spartans. Gall scored and drove in two runs. Perrotta had an RBI.

For the Raiders, Juan Baez had two hits and drove in the team’s lone run.

New Hartford travels to Oneida for a league game at 4:30 p.m. Monday.

Whitesboro scores six in the second in win

The Whitesboro baseball team put up six runs in the bottom of the second in a 9-1 win over TVL foe Utica Notre Dame Thursday.

Noah Clausen (1-0) earned the win on the mound, starting and going five innings without allowing a run. He struck out 10.

Ryan Cook led the Warriors’ offensive attack, hitting grand slam in the second inning and adding another hit later. Gavin Palombo doubled. Colin Skermont and Ty Montrose each had a hit, run and an RBI. Jacob Cole had a hit and drove in two runs. Max Pawlowski had a hit and scored two runs.

Notre Dame’s Jaylen Jackson was 2-for-3 with a run and two stolen bases. Dan Head doubled and drove in a run.

Fran Neth took the loss on the mound for the Jugglers.

Whitesboro improved to 8-0 and 4-0 in the league. The Warriors hosted Oneida in the TVL Friday. Results were not available at press time.

The Westmoreland baseball team remained unbeaten with an 8-0 win at home over Cooperstown Thursday in the Center State.

The Bulldogs scored twice in the bottom of the second to take a 2-0 lead then added at least one run each inning the rest of the way.

Hunter Kierpiec (4-0) went six innings on the mound for the win. He allowed three hits and walked five and struck out 10. Josh Suber threw a scoreless, hitless inning of relief with a walk and a strikeout.

Suber was 2-for-4 at the plate with two runs scored, two RBIs and three stolen bases. Caleb Miller singled, scored, drove in a run and stole three bases. Kierpiec had a single, scored and drove in a run.

Westmoreland is now 8-0 and 5-0 in the league. The Bulldogs hosted West Canada Valley in league play Friday. Results were not available at press time.

The Adirondack baseball team defeated Little Falls 5-2 Thursday in the Center State, handing the Mounties their first loss in 11 games.

Colin White got the win for the Wildcats, going 6 1/3 innings and allowing two earned runs on four hits and six walks. He struck out seven. Chris Strobel pitched 2/3 of an inning in relief, allowing no hits or runs.

White also powered the Adirondack offense with two home runs and three RBIs. Jake Khouri was 3-for-3 on the day.