A black SUV is wanted by law enforcement following a hit and run crash in the City of Oneida from Tuesday morning. 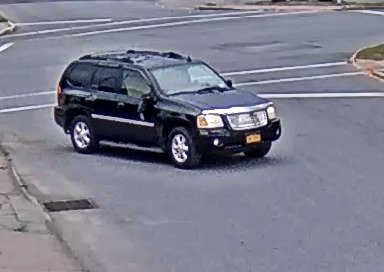 Anyone who recognizes this black-colored GMC Envoy is asked to call Oneida Police at 315-363-2323 after it was involved in a hit and run crash in Oneida Tuesday morning.
(Photo courtesy Oneida Police)
Posted Wednesday, October 5, 2022 3:20 pm

ONEIDA — A black SUV is wanted by law enforcement following a hit and run crash in the City of Oneida from Tuesday morning, according to the Oneida Police Department.

The Envoy has a broken passenger's side mirror and is believed to have sustained some damage to the front end in the crash.

Anyone with information on the vehicle or the driver is asked to call the Oneida Police Department at 315-363-2323. All calls may be kept confidential.