The Section III softball postseason has begun, with Class B two seed Oneida and Class D two seed Oriskany earning the highest spots among local teams. Camden and New Hartford are the third and four … 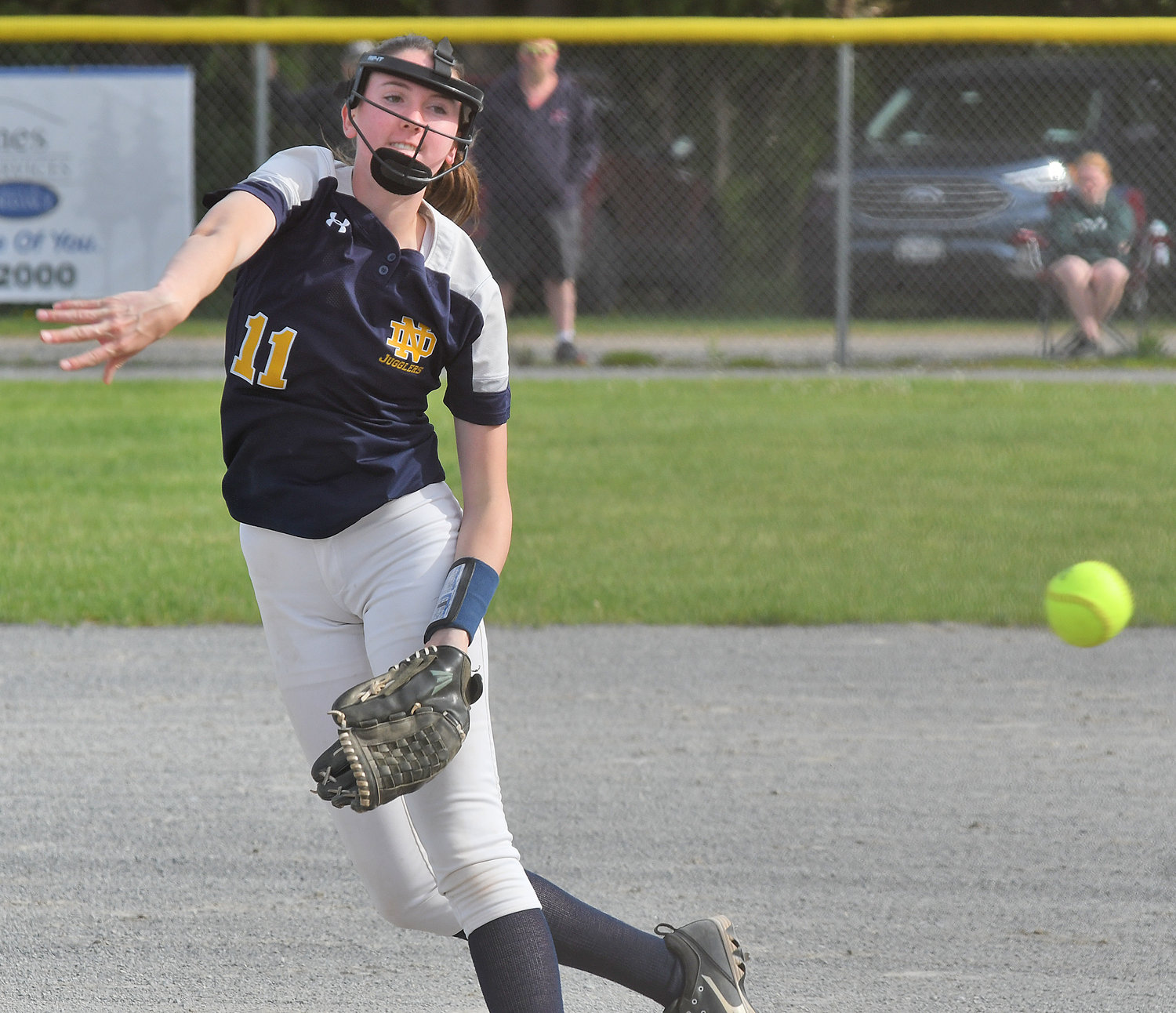 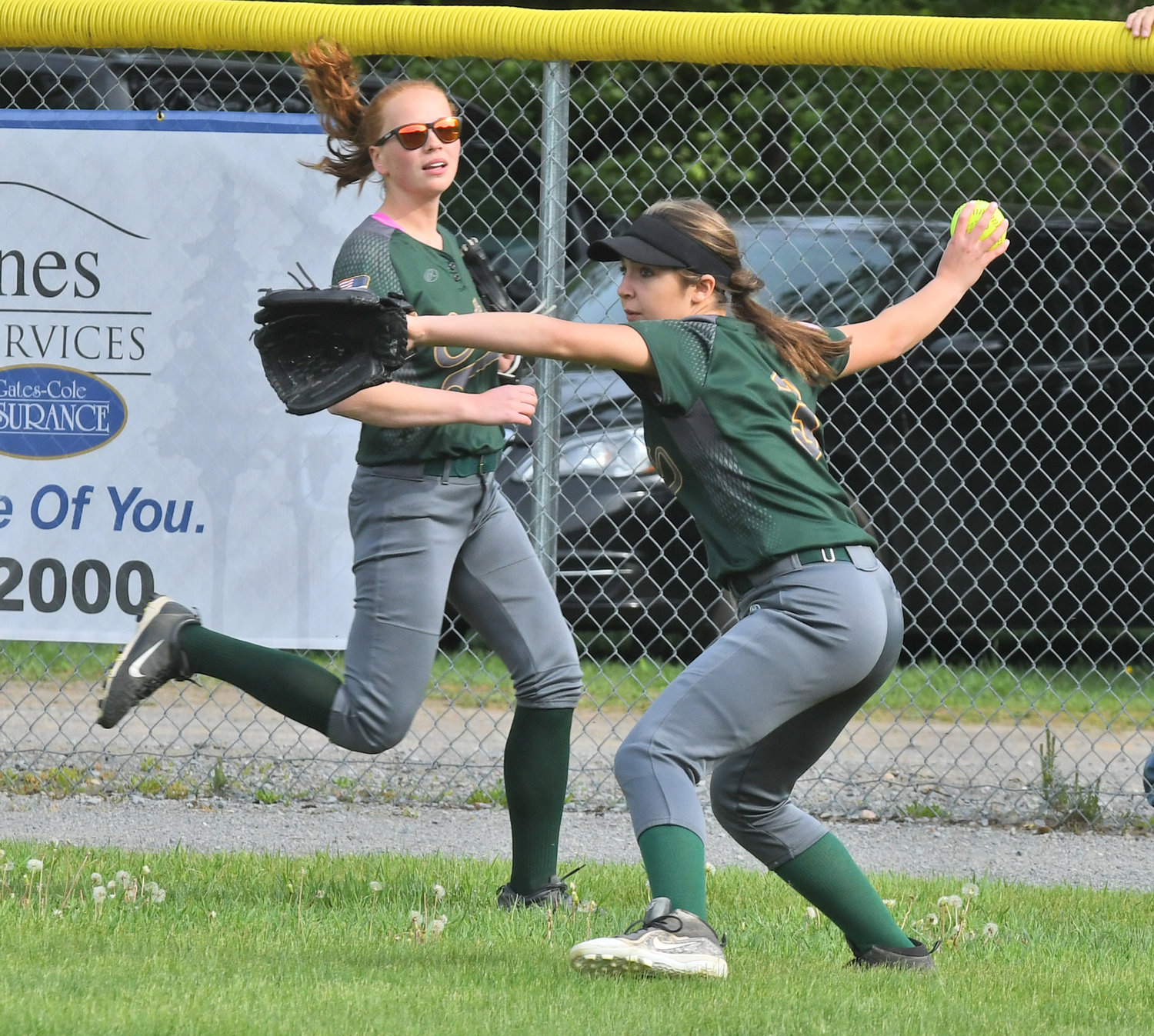 Adirondack's Mariah Depan fires the ball in from the outfield after a Utica Notre Dame hit Monday. Kaitlin Gallo backs her up on the play. The 16th seed Wildcats were hosting the 17th seeded Jugglers in the first round of the Section III Class C playoffs. The visitors came away with a 5-1 win.
(Sentinel photo by John Clifford)
Previous Next
Posted Monday, May 23, 2022 9:03 pm

The Section III softball postseason has begun, with Class B two seed Oneida and Class D two seed Oriskany earning the highest spots among local teams. Camden and New Hartford are the third and four seeds in Class A, respectively.

Rome Free Academy (10-8) is the four seed in Class AA, and will play against top seed Liverpool (13-6) at 4 p.m. on Saturday at Onondaga Community College. The two seed Baldwinsville (17-1) and three seed Cicero-North Syracuse (6-12) will play that day at 6:30 p.m. at the college. The winners will play in the championship game at 7 p.m. on June 1 at Carrier Park Field East in East Syracuse.

The Oneida softball teams got Tri-Valley League wins over Central Valley Academy Friday and Utica Notre Dame Saturday to win the Pioneer Division. It’s the 15th year in row the team has had at least a share of the title.

On Friday, Oneida won 12-2 at home. They scored six in the second inning and never looked back.

Those initial six runs were more than enough for Oneida starting pitcher Kerrigan Crysler, who picked up the win. She went six innings and allowed no runs. She allowed four hits and walked two while striking out nine.

Olivia Friend had two hits including a home run, with three runs scored and four RBIs. Kaylin Curro was 3-for-4 with double, three runs and two RBIs. Julianna Caroli was 3-for-3 with an RBI.

CVA’s Peyton Hoffman had three of the team’s five hits. Scout Ludwig had a hit and drove in two runs.

Madison Obreza took the loss, going the first four innings while surrendering 10 runs, five of them earned. She allowed nine hits and walked one.

On Saturday, Crysler got another win, striking out 14 as the team won 12-3.

Crysler threw a complete game, allowing six hits and walking no one.

Kaylin Curro was 4-for-4 with three runs and two RBIs. Friend had three hits, five RBIs and a run. Caroli had a single and double with an RBI. Mikah Albro had two hits, scored three times and drove in a run.

For Notre Dame, Ella Trinkaus took the loss, going 4 1/3 innings and allowing six runs, five earned, on 10 hits and a walk. She struck out eight.

Erin Trinkaus had a hit and two RBIs. Bella Roberts had a hit, a run and an RBI.

The Camden softball team got a 16-1 win over host Utica Proctor in the TVL Friday. Aveyr Prievo threw a complete game in the win, allowing a run on two hits.

Prievo struck out two and walked three. At the plate she had two hits.

Madison Getz had a hit and scored for Proctor.

Oriskany softball wins to earn a share of division title

Juliette Tagliaferi was the winning pitcher. She threw a complete game, striking out five and allowing five hits and two walks. At the plate she was 1-for-3. Kaelyn Buehler tripled and drove in two runs for Oriskany.

Logan Cookingham was 2-for-3 at the plate for Poland.

Saturday, Cooperstown held HP to four hits and kep the Knights off the scoreboard.

Terralyn McLaughlin had three of HP’s hits, including a double.

Rossi allowed three runs, one of them earned, on five hits with four strikeouts for HP.

Bulldogs get softball win over Wildcats

The Westmoreland softball team scored in each of the first four innings in an 8-3 win over Adirondack in the Center State Friday.

Jenna Tyczynski had two hits, a run and an RBI for Westmoreland. Autumn Millington had two hits and scored a run. Olivia Moore had a hit and two runs batted in.

Moore also got the win, going all seven innings and allowing three unearned runs on two hits and 10 walks. She struck out four.