Maintaining a fresh appearance and staying ahead of the game are important to Oneida Nation Representative and Oneida Nation Enterprises Chief Executive Officer Ray Halbritter.“You can’t rest on … 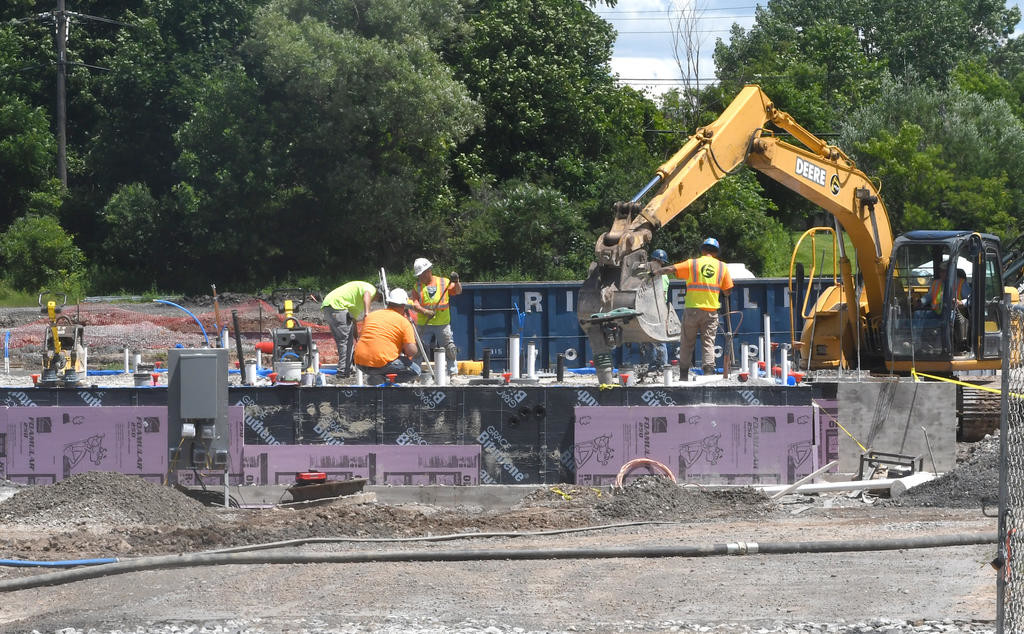 NEXT GENERATION CONVENIENCE — Construction is underway in Sherrill on a Maple Leaf Market, the Oneida Indian Nation’s new convenience store brand. Located at Route 5 and Sherrill Road, it will have a focus on fresh, made-to-order food not now offered at the Oneidas’ SavOn chain of convenience stores. A fall opening is anticipated. (Sentinel photo by John Clifford)
Posted Thursday, July 6, 2017 4:00 pm
Dan Guzewich, Staff writer

Maintaining a fresh appearance and staying ahead of the game are important to Oneida Nation Representative and Oneida Nation Enterprises Chief Executive Officer Ray Halbritter.

“You can’t rest on your laurels,” the executive told area business leaders recently. He said keeping an eye on the future is a driving principle of the nation, whose varied interests include a destination casino-resort and convenience stores.

In remarks before the Mohawk Valley EDGE Board of Directors, he spoke of the Oneidas’ commitment to Central New York as he went through a series of examples of what’s taking place. “In the next nine months you will see a significant amount of reinvestment to continue on this path,” he said.

• “We are currently building a new nation courthouse, originally established in the 1990s the nation court handles disputes among our members and members of other Indian tribes, as well as small claims cases.”

• “In Chittenango, we will be continuing our reinvestment in what was an underused plaza we brought to life two years ago when we opened Yellow Brick Road, our second gaming facility. In the coming weeks we will be announcing the next store to open in Emerald Plaza.”

• “In the fall, we will be opening our two first Maple Leaf Markets, our new chain of convenience stores that will be offering fresh, healthy food options to go.” The locations are Sherrill and Chittenango.

• “In Bridgeport, ground has broken on Point Place Casino – our third gaming facility scheduled to open in spring of 2018. ... Point Place will create more than 450 permanent and local construction jobs and generate significant revenue for the region.”

He also spoke of improvements at the sprawling Turning Stone Resort Casino in Verona.

“If you take a walk around the resort you will see that Turning Stone has had some major recent upgrades, including an all new-gaming floor with all new tables, games, a new layout, contemporary cocktail lounges and a new high-limits area,” he said.

In addition, the 285 guest rooms in the Tower Hotel have been remodeled, an $8 million undertaking. The rooms have been decorated with photographs featuring scenes of Central New York and the Adirondacks. The furniture was made by an upstate company.

Halbritter also spoke of the proposed casino in downtown Utica. It would be developed by the Oneidas as part of County Executive Anthony J. Picente Jr.’s initiative to establish an arts, sports and entertainment district in downtown Utica.

“The proposed U District would be a welcome addition to the tourism economy in Central New York, which is why we are prepared to invest approximately $50 million in this project should it move forward,” Halbritter said.

He said these developments allow the nation to continue to invest in its employees and regional vendors.

“Last year, Oneida Nation Enterprises paid out a total of $139 million in payroll; and have spent $225 million with more than 3,000 vendors, 27 million of which has stayed in Oneida County reaching 318 vendors.”