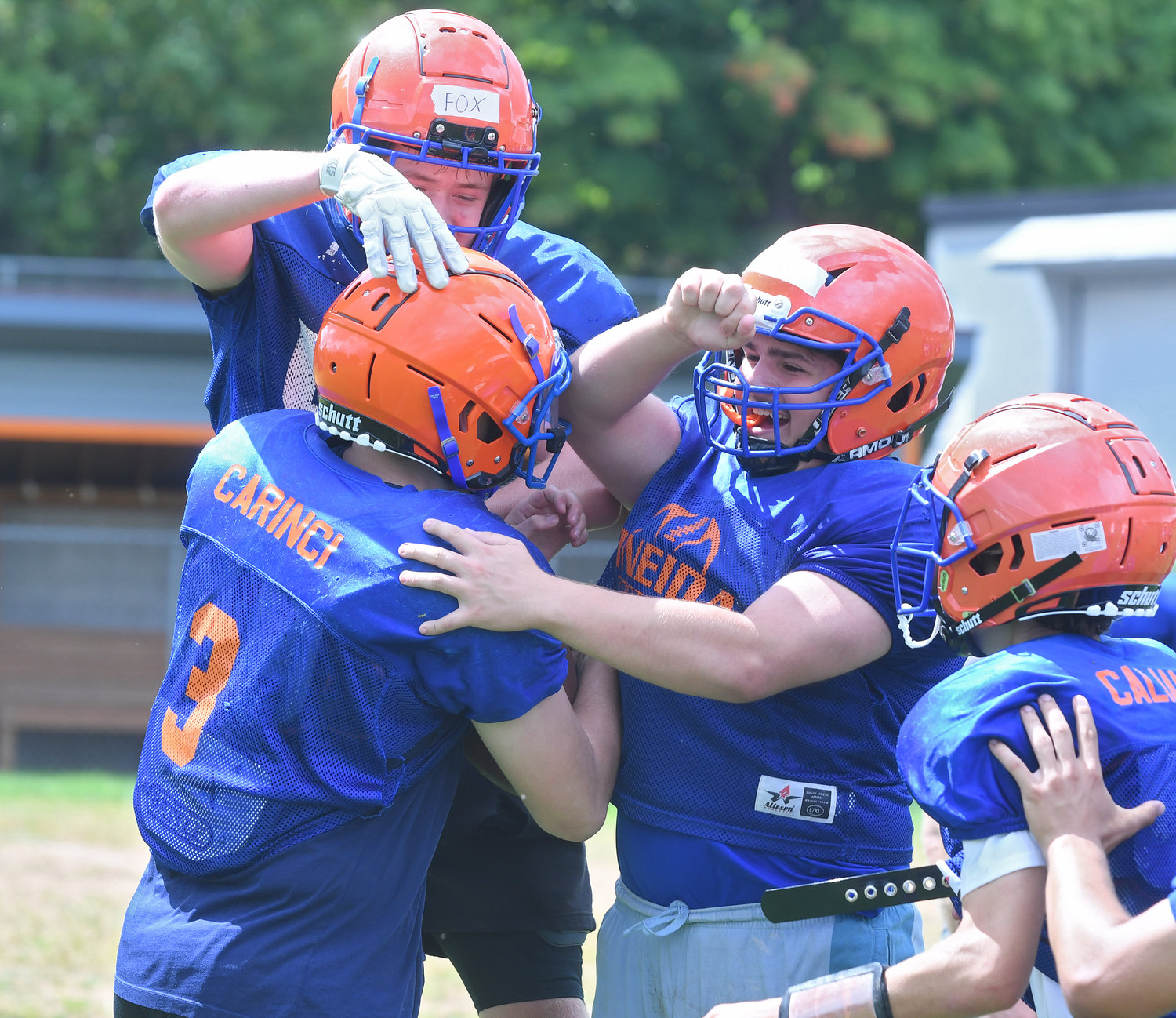 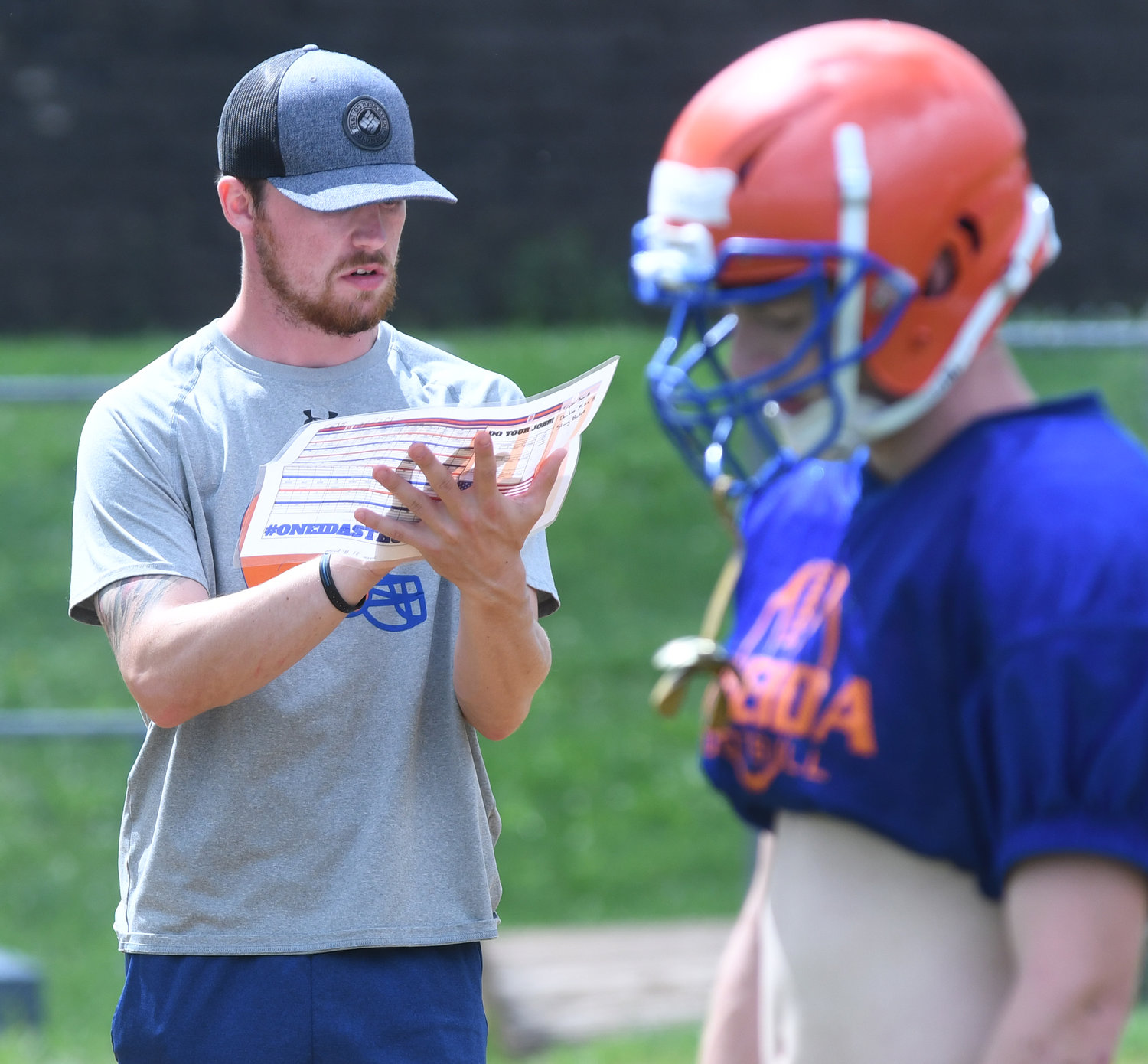 Oneida first-year head coach Matt McCoy reads off a card during preseason practice. The former Vernon-Verona-Sherrill player was a defensive back at then-Utica College and later coached on the defensive staff there. Now he’s trying to lead the Oneida team back from being 2-3 in the spring 2020-21 season and 3-5 last fall.
(Sentinel photo by John Clifford) 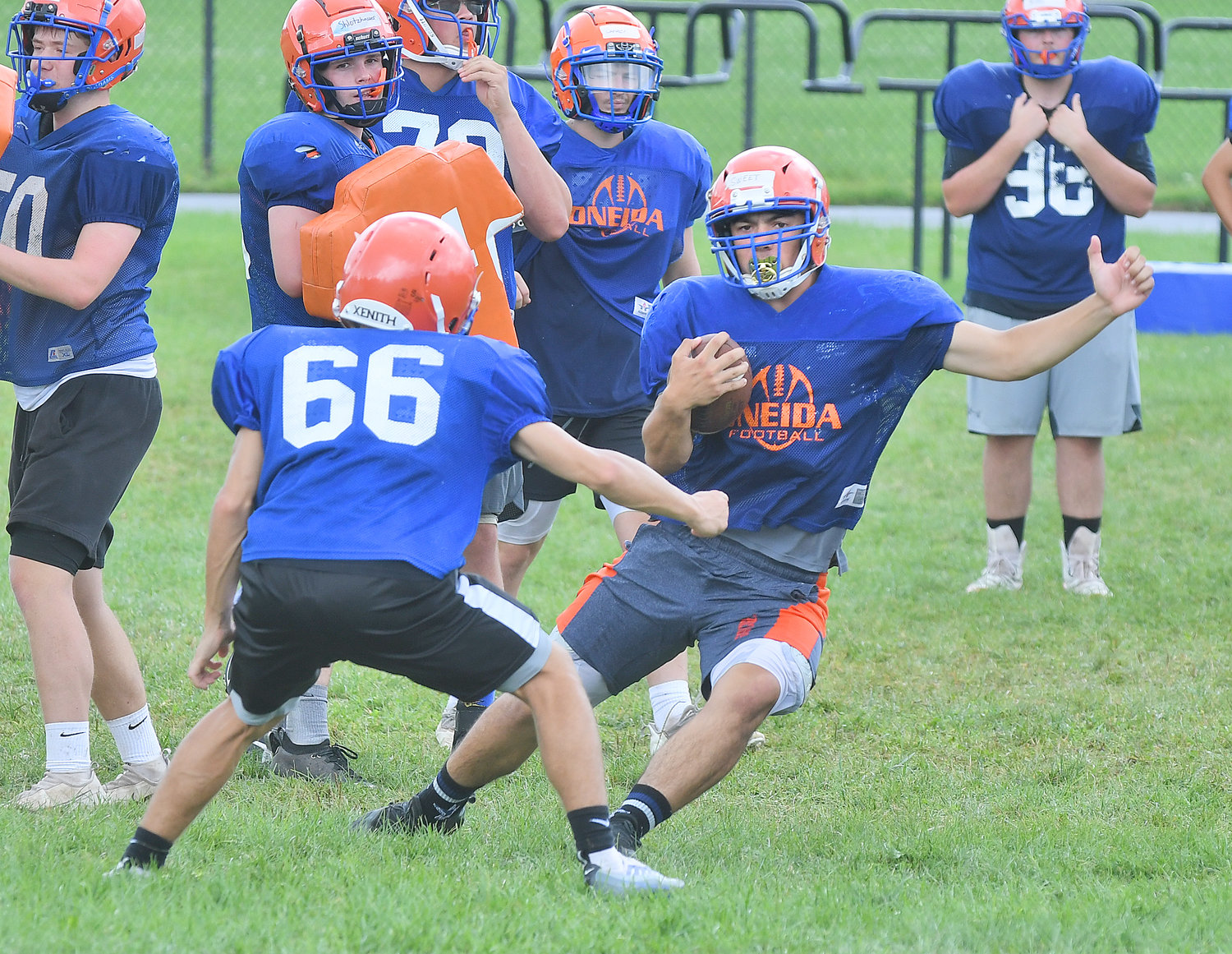 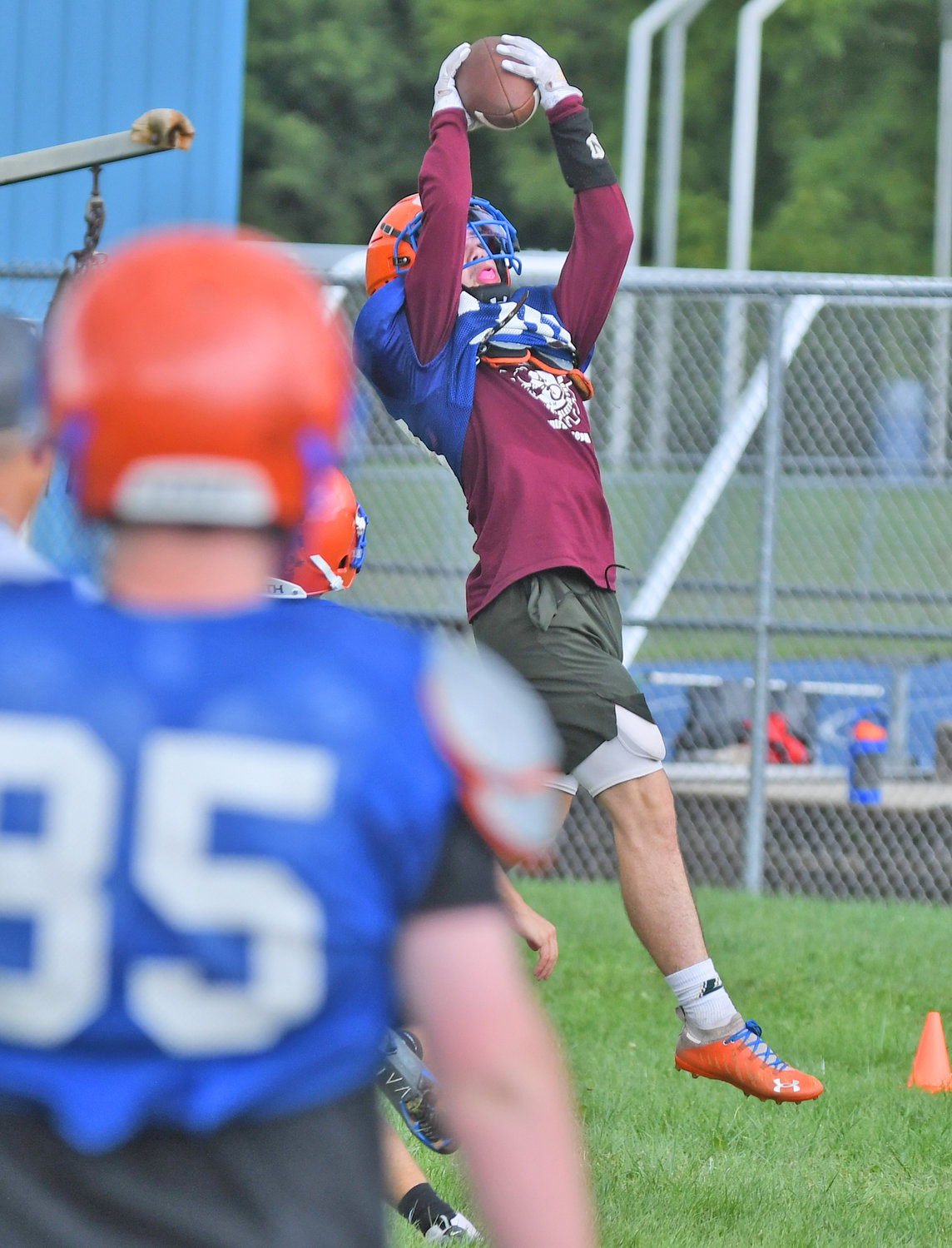 Oneida senior wide receiver Hayden Freebern jumps to make a catch during a preseason practice. He's back on the field after missing some time last year with an injury.
(Sentinel photo by John Clifford) 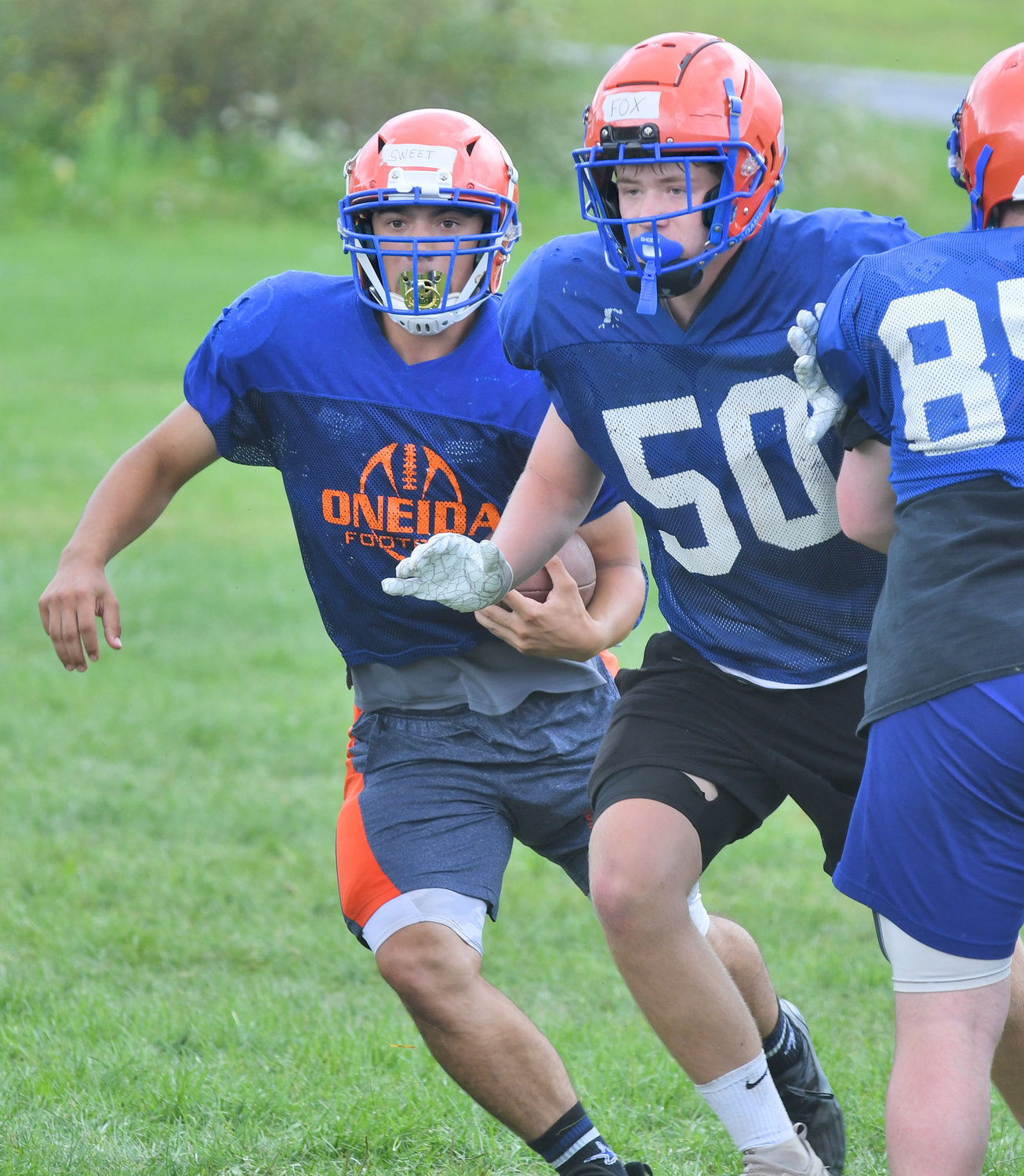 Oneida junior running back Gavin Sweet hits a hole with lineman Landen Fox paving the way during a preseason practice. Sweet is half of a one-two punch with fellow junior running back Pierce Relyea. Fox, a guard, is part of a group of three senior linemen who will anchor the line of scrimmage along with center Cole Meyers and guard Zach Smithson.
(Sentinel photo by John Clifford) 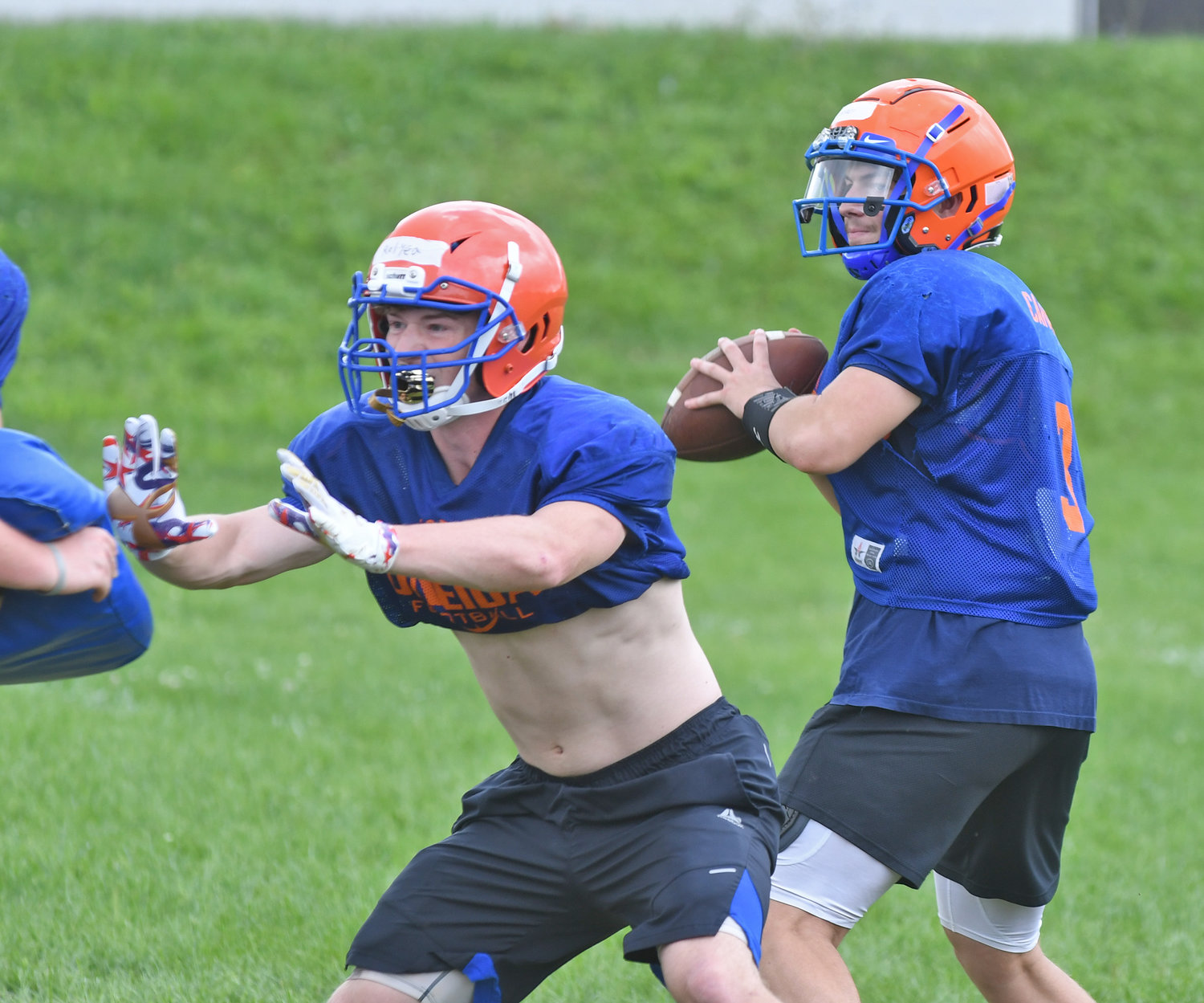 ONEIDA — First-year head coach Matt McCoy has the Oneida football team focusing on short-term goals: To get better at each practice, to win the game the team has on the schedule that week rather than look too far ahead.

First up was a game with a little more to it than just McCoy’s debut as a high school head coach. The Vernon-Verona-Sherrill graduate faced off against his alma mater at home in a non-league contest and lost 14-0. VVS dropped down to Class C while Oneida remains in Class B.

Oneida went 3-5 last season. Gone from that team are such 2022 graduates as defensive ends Ryan Wuest and Hunter West as well as running back Braedon Williams.

Quarterback Bryson Carinci returns after starting last season as a sophomore. “He’s been our guy this fall,” McCoy said. Tommy Lacy, a senior who is new to varsity, has been getting plenty of reps in preseason practices too, he noted. Carinci is “more of a running quarterback, bigger and stronger.” Lacy is more of a thrower. So, the coach said, the team can utilize either one as the situation demands.

What will the Oneida offense look like with new coach McCoy (who played defensive back at then Utica College and was a defense coach there after graduating)? “In the past they’ve run a lot of wing-T, buck sweep, get pulling guards out into space” and counters, he observed. “We’ll keep some things,” including terminology. “I’m so impressed with these kids and what they’ve gotten in just five days of practice,” he said during the preseason. “Offensively we are going to do whatever it takes to win the game and however best we match up against who we’re playing. I think you have to look at the personnel you have and put them in a position to win the game.” Oneida could use speed or could lean on its power run game, he said.

That run game will focus on juniors Gavin Sweet and Pierce Relyea. “It’s nice to have a one-two punch to keep those guys fresh,” McCoy said. Other running backs are seniors Mark Schlotzhauer and Derek Sharlette and juniors Carter Urtz and Brady Cislak.

Senior Hayden Freebern is back after missing some time last year with an injury to provide a target for Carinci or Lacy. When Lacy isn’t at quarterback, he’ll be out to catch passes as a six-foot-three target.

The other receivers are seniors Brent Zeller and Jayden Nelson as well as juniors Elliot Calianese and Tre Sinnott-Wynn. The team also has senior Owen Petzoldt and sophomore Austin DeGroat at tight end.

The offensive line has three senior returning starters who will play the three middle positions — center Cole Meyers and guards Landen Fox and Zach Smithson. “They understand each other well, how to work together,” and will get the tackles involved, McCoy said. “Things you think of as a coach and they’re two steps ahead” because “they understand the big picture.” Competing for starting tackle spots are senior Merrick Miller, junior Landen Carter (who is new to football) and junior Ethan Cordell. The team will have plenty of depth, with other linemen senior Quinn Jennings and juniors Noah Kirk, Axar Patel, Mark Kouselas, Lucas Barber, Corban VanDyke and Gabriel Comstock. “We have two full lines, which is nice,” and helps in practice and preparation, McCoy said.

On defense, “The big thing for us, especially in Class B football, we have to be able to stop the run. Make teams throw. Try to make them beat you through the air,” the coach said. The plan is to rotate players to stay fresh, especially with key players playing both ways. The team will also focus on creating turnovers.

In addition to McCoy’s collegiate coaching experience, he said, “The coaching staff that I’ve been lucky enough to work with at Oneida has been awesome.” They talked in the spring about schemes he intended to bring to the program, but they already shared a philosophy on coaching student-athletes both in the game and in life as people, he noted.

The defensive tackles will be a mix of Miller, Carter, Meyers and Cordell. DeGroat and Petzoldt will be the ends. Other linemen are Fox, Kirk, Patel, Kouselas, Jennings, VanDyke and Comstock.

A group of five will be the primary linebackers — Sweet, Smithson, Schlotzhauer, Urtz and Relyea. Also listed as linebackers are Cislak and Barber.

McCoy said the players’ motto that grew out of their meeting at the start of the season is: “Go 1-0 each week.” The question the team has been challenged with answering is “What can we do each practice to get better?” He said he wants to see players learn from mistakes and not make them repeatedly. As a long-term goal, he said, the plan is “to make a playoff run this year, but I don’t like to look ahead.”

With the teams in different classes this year, the rivalry with VVS almost didn’t happen, McCoy noted. “I’d be pretty upset if my senior year I wasn’t able to play our rivalry game.” He continued, “We’re glad we made that happen. I know the kids are excited.” And Gary Oliver, the VVS head coach who taught him, will surely adapt to the new schemes McCoy brings along, he said. VVS’ win between the schools last year gave the Red Devils a one-win advantage in the history of the matchup, so McCoy said he is out to get it even again.

“Every game in Class B is tough. It’s not an easy class to play in, especially our side,” the coach said. In the other division, the South West, the Institute of Technology Central is a fast, skilled team, he said. And Homer on the road is “a big game for us,” as the team was a force last year. “I know our guys have that one circled on the schedule because they want to play a team that’s historically good.” Indian River has dropped down from Class A. Camden, Central Valley Academy and South Jefferson are the other teams in the North East with Oneida.