WHITESTOWN — The Oneida County Sheriff’s Office has released their Ten Most Wanted List for 2022, including fugitives wanted for crimes ranging from drug possession to assault to attempted rape. The … 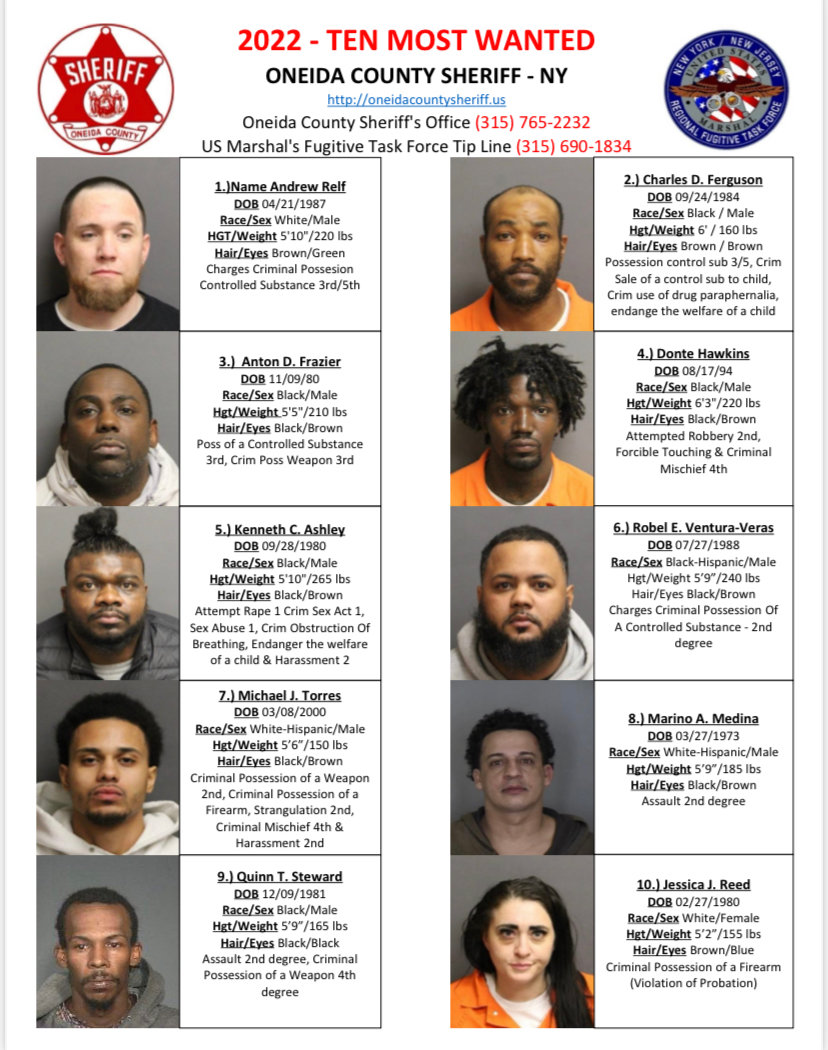 WHITESTOWN — The Oneida County Sheriff’s Office has released their Ten Most Wanted List for 2022, including fugitives wanted for crimes ranging from drug possession to assault to attempted rape.

The list was built from a variety of factors, including whether or not potential fugitives would just be set free again due to bail reform, said Sheriff’s Sgt. Michael Ladd, supervisor with the Warrants Unit.

“We’re looking to see which ones will stay in custody, so we don’t have to go looking for them again,” said Ladd, who has 23 years of experience with the Sheriff’s Warrants Unit. There are currently five members of the unit, all of whom are also members of the U.S. Marshal’s Regional Fugitive Task Force.

Ladd said several factors go into putting the annual Ten Most Wanted List together. He said they consider the level of the crime as well as the criminal history of the fugitive. He said many of the people on this year’s list have already pleaded guilty to their crimes, so when they are caught, they will be sentenced to either the county jail or state prison.

“The list is made up of the ones that we need the most help finding,” Ladd explained. “We’ve exhausted all leads that we’ve had and we need the public’s help.”

The Ten Most Wanted:

1. Andrew Relf, age 35, of Whitesboro, wanted on charges of third and fifth-degree possession of a controlled substance. According to law enforcement records, Relf was originally taken into custody in October 2021 as part of a large-scale series of drug busts in Utica, Whitesboro and Yorkville.

2. Charles D. Ferguson, age 37, of Utica, wanted on charges of drug possession and sale, as well as endangering the welfare of a child. Records state that Ferguson was originally charged during a traffic stop in Utica, where he was found hiding drugs in a child’s shoe.

3. Anton D. Frazier, age 41, of Utica, wanted on charges of drug and weapons possession. Records show that Frazier was originally charged in Utica in December 2019.

10. Jessica J. Reed, age 42, of Utica, wanted on charges of weapons possession and probation violation. Records state that Reed was charged with a loaded handgun during a traffic stop in Utica in April 2021.

According to Sgt. Ladd, the numerical order of the fugitives is not significant to their wanted level.

Ladd said the Sheriff’s Warrants Unit is “very proactive” and they have a good catch rate for the fugitives on each year’s Ten Most Wanted List.

He said putting the list together each year is worth the effort no matter how much feedback they get.

“If we get even just one tip generated by this poster, we’re satisfied,” Ladd stated. Anyone with information on the whereabouts of these fugitives is asked to call the Sheriff’s Office at 315-765-2232 or the U.S. Marshal’s Regional Fugitive Task Force at 315-690-1834.

Anonymous tips can be sent to the website www.MohawkValleyCrimeStoppers.com or by calling Crime Stoppers at 1-866-730-8477.