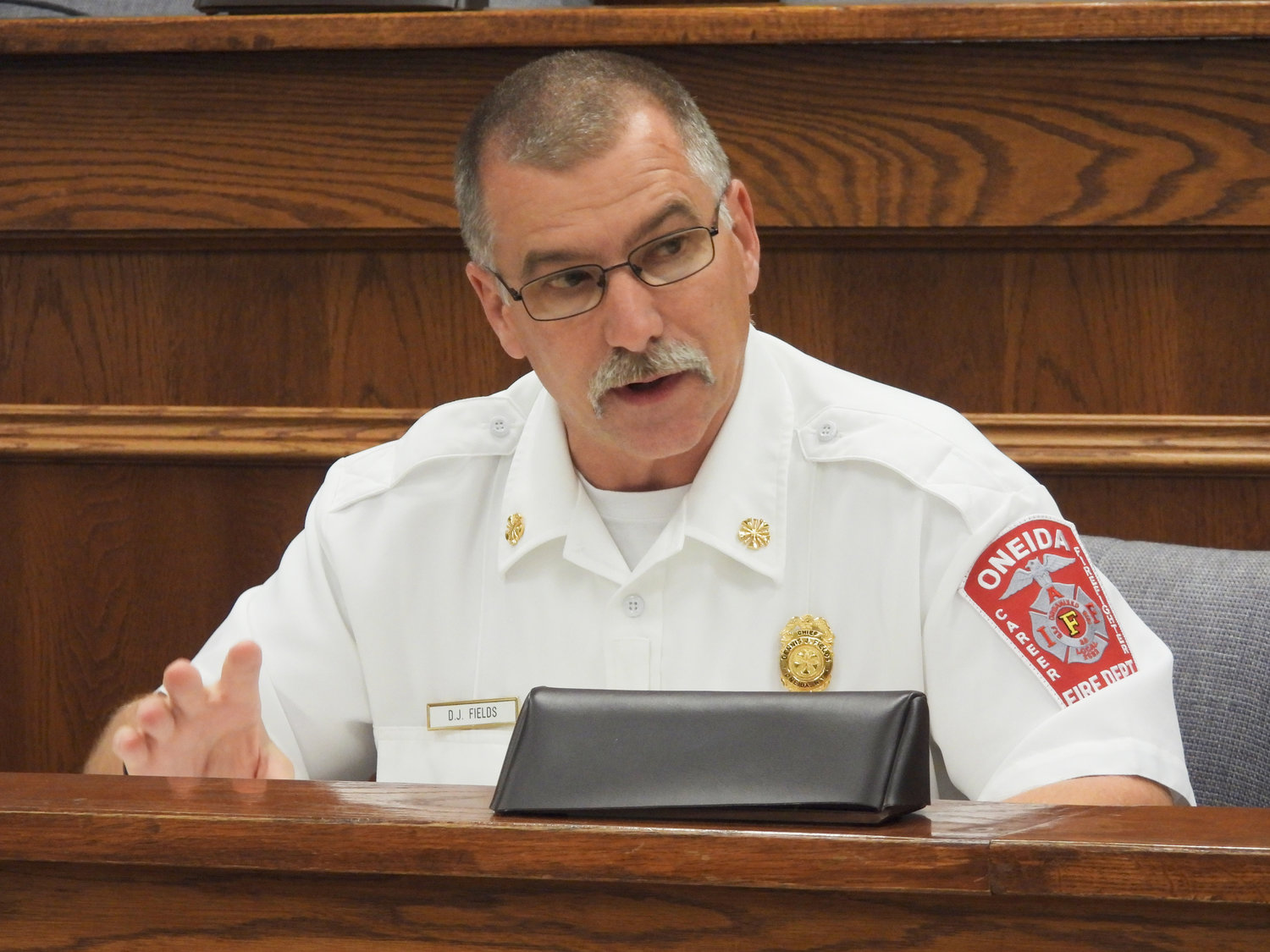 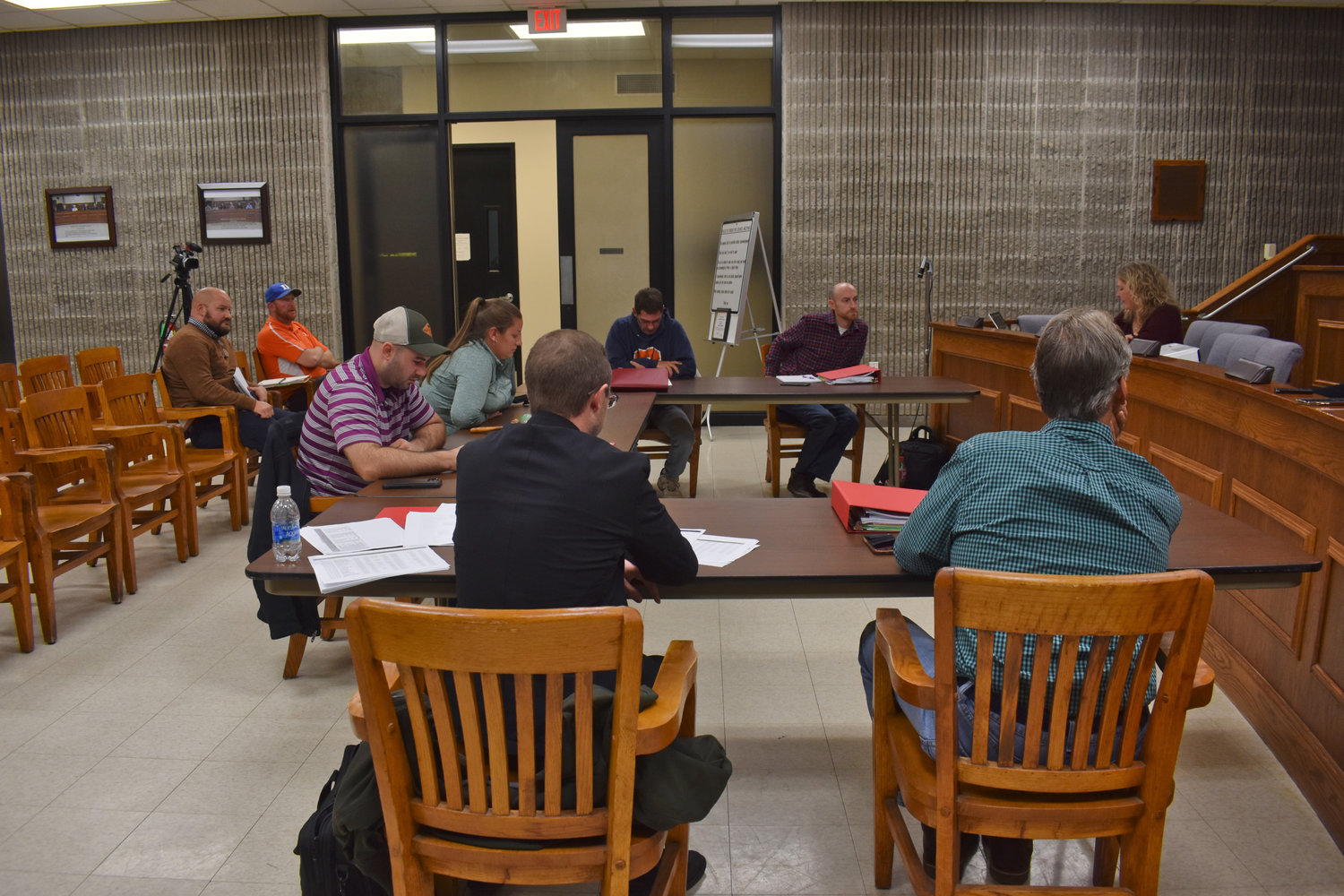 Members of the Oneida Common Council discuss the city’s proposed 2023 budget on Wednesday. Councilors were looking for ways to raise revenues and cut expenses.
(Sentinel photo by Carly Stone) 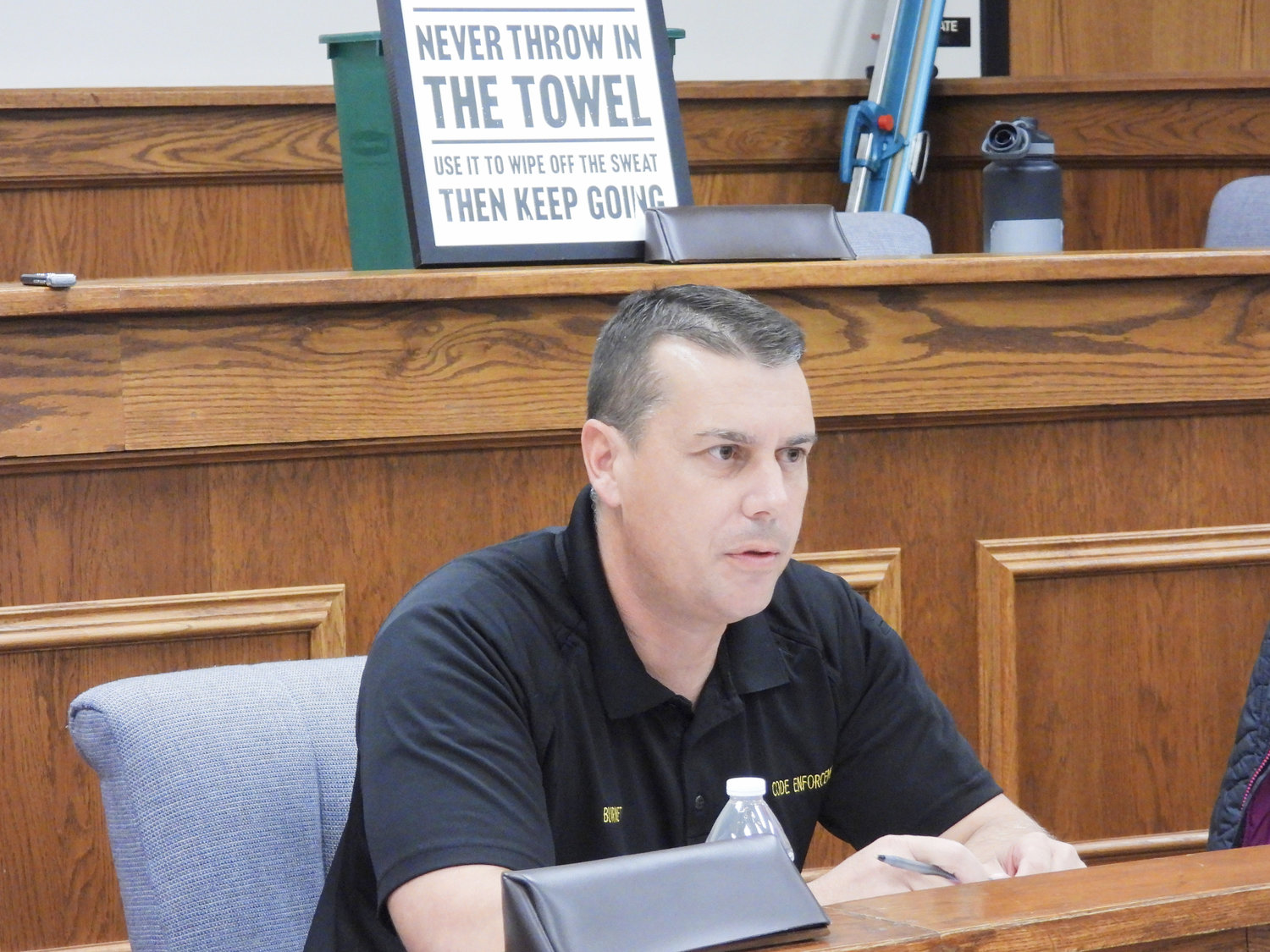 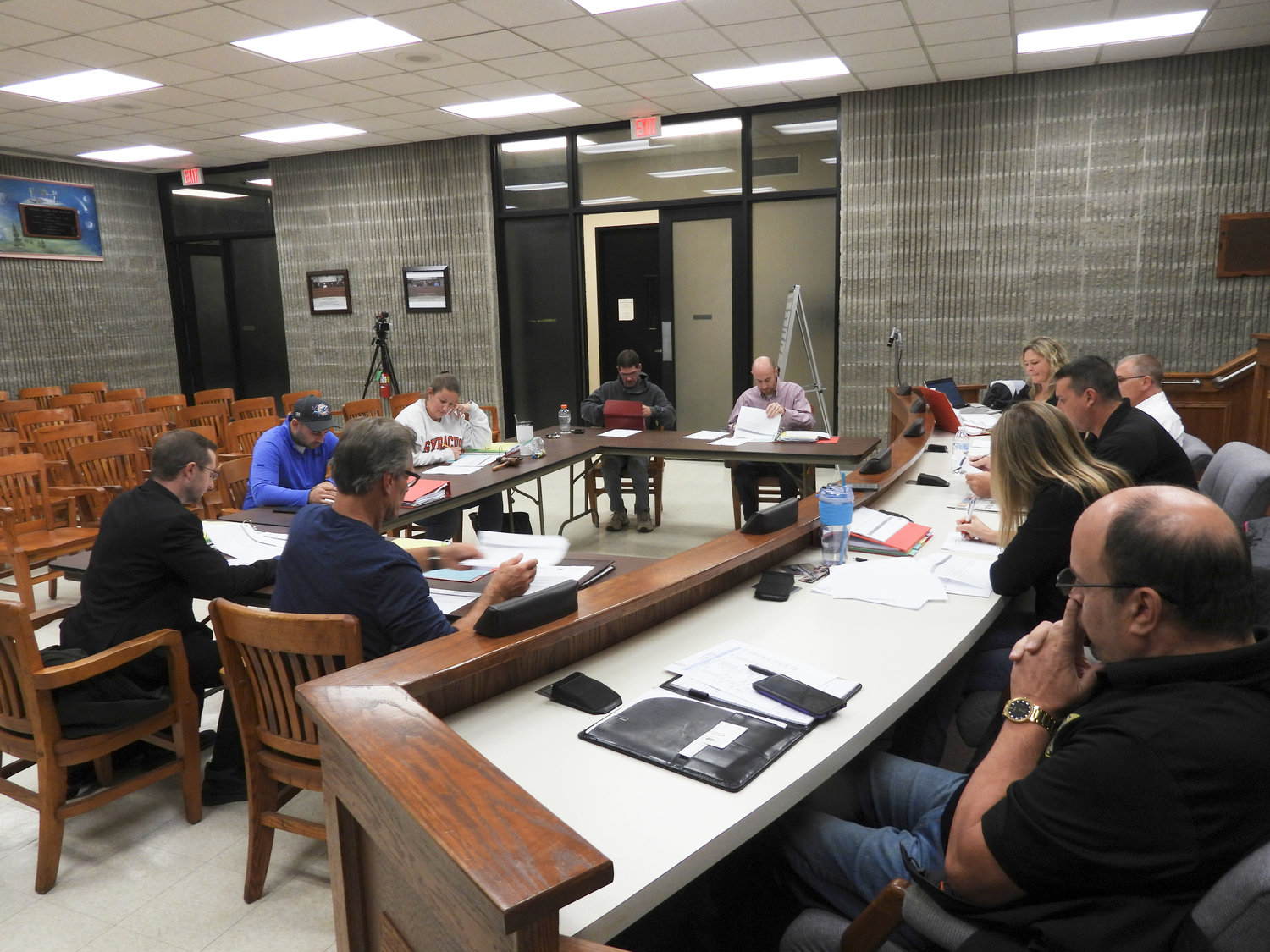 ONEIDA — Common Councilors are gathering to deliberate Mayor Helen Acker’s proposed $25 million budget for 2023. Acker has presented a budget with a 0% tax increase, which would apply more than $700,000 from the city’s fund balance, leaving the balance at 21.5% of the budget — a percentage that City Comptroller Lee Ann Wells would like to see raised.

The tight numbers, officials said at budget hearings Wednesday and Thursday at City Hall, are partly the result of increased costs throughout 2022. While the city saw more revenues than anticipated in 2022, it also saw more expenditures — causing some $650,000 to be pulled from the fund balance.

The highest tax rate the council could institute and stay under the state’s tax cap is 4.4%, officials said, equating to $220,508 in additional revenue. Under that scenario, a tax payer in the city’s inside district would pay $48.17 more per year on a $100,000 home.

“Even that is a third of what we’re trying to find,” said Ward 5 Councilor Bill Pagano. “Either way, we’re still short.”

Earlier in the meeting, the council reviewed the budgets for the Planning Department, along with Parks and Recreation. With money tight, almost all items were scrutinized.

In Planning, the council is considering reducing, refiguring, or removing a number of flower pots that are tended in the city every year. The cost for the city was nearly $10,000 for 54 pots.

In Parks and Recreation, the fate of additional stone dust going on the Oneida Rail Trail is uncertain due to cost.

One of the biggest proposed cost-cutting solutions: closing the city pool.

According to Parks and Recreation Director Luke Griff, the cost of chlorine has gone up nearly 400%. If the pool was closed, that would equate to a ball-park savings of about $35,000 when salaries and chemicals are eliminated, Wells said.

Ward 1 Councilor Jim Szczerba suggested the possibility of investing in a saltwater chlorinator for the pool, which generates its own chlorine when fed salt. “I’m waiting for a guy to get back to me, but they do make them for commercial pools,” Szczerba said. “It’d be a one-time investment.”

Oneida City Clerk Sandra LaPera spoke before the council, asking for Deputy City Clerk Andrea Hitchings to receive a raise next year. LaPera proposed an increase in salary to $51,000. The primary reason being Hitchings taking on additional responsibilities this year with the city’s website creation and management. Hitchings “literally built the website from scratch,” LaPera remarked.

At the Wednesday, Nov. 3 budget meeting, Codes Enforcement Director Bob Burnett said he’s all in on the city of Oneida and is here to stay — even after getting a job offer elsewhere.

“I was offered a position somewhere else, but I declined it,” Burnett declared at the meeting. “Because I am home. Oneida is my home and community. I have a couple of communities, but I believe in being involved in my community.”

Burnett said he’s been putting in work outside of hours to promote and market the city of Oneida, meeting with a real estate agent who facilitates businesses. Burnett said he was hoping to see Starbucks move into the old KFC building on Main Street, but that’s been ruled as unlikely. But a T-Mobile corporate building is looking like it will take the place of the old KFC building.

In the Codes Department’s 2023 budget, Burnett had put a request for $14,000 in the budget for a program that could be used to better organize responses by not just the Codes Department, but the Fire and Police Department as well. “Every [department] that has anything to do with that tax map address has the ability to upload it, so every department can see it,” the director said. “It could be codes violations, information from the police, variances, and more.”

The money was taken out of the mayor’s budget.

There was also a request for new filing cabinets, a new office chair for Codes Department’s clerk, a new desk, and a new printing table to name a few.

Looking at the Codes Department’s 2022 overtime budget, Burnett said it was mostly a safety net should something come up that would require the department’s immediate attention and they came well under budget this year. The council were in agreement, as well as Burnett, to take $2,000 out of the 2022 overtime budget to be used elsewhere.

To show the Codes Department is making an impact in the city, Burnett showed the councilors a series of before and after pictures of numerous properties in the area.

“The owner doesn’t mind [me talking] about this and it’s the house on Stone Street,” Burnett said. “The Codes Department has a direct impact on [mitigating] crime. That particular house [on Stone Street] is a multi-family and was high crime. It was known as a drug house in the area and everyone knew and knew over years. We were able to seize on an opportunity to vacate that property.”

“It was bought, completely rehabbed it, and as far as I’m aware, the crime is gone from that area. And how do I know that? The neighbors called us,” Burnett said. “We don’t usually get a lot of calls for thanks, but this time we did.”

The Oneida Fire Department saw a number of cuts to their budget — ones that Fire Chief Dennis Fields would like to see reversed.

“My training overtime was budgeted for $15,600 this year,” Fields said. “In the past year, the firefighters negotiated a new contract and we must now provide 16 hours of training at the Madison County Fire Training Center for each individual. That’s 16 hours times 24 firefighters. The current budget as proposed by the mayor isn’t enough to pay for that. Right now, we’ve only done eight hours each and I’m at $11,860 out of the budget. The proposed budget isn’t enough to cover that 16 hours.”

To potentially cover the shortfall, $10,000 was proposed to be moved from the overtime line to the training overtime line.

Fields’s other concern was a reduction in the budget for medical supplies by around $3,000. At this point in the year, Fields’s said they’ve spent $8,285 with two months in the year remaining. “Those are consumables we use every day, whether that’s IVs, bags, bands, and more,” Fields said. “The bands for the CPR machine alone are $125 each.”

Additionally, Fields said the department needs more turnout gear. The department uses its maintenance budget to replace some turnout gear each year that is in need of replacement after 10 years, as required by law, as well as buy gear for new recruits.

As a result, councilors agreed to remove $15,000 from the Parks and Recreation Department’s Rail Trail maintenance, adding $3,000 of that to the Fire Department’s medical supply budget line and $8,000 into the turnout gear line.

The next city budget meeting will take place on Monday, Nov. 7, at 6:30 p.m. in the City Hall Common Council Chambers with a focus on the Department of Public Works.