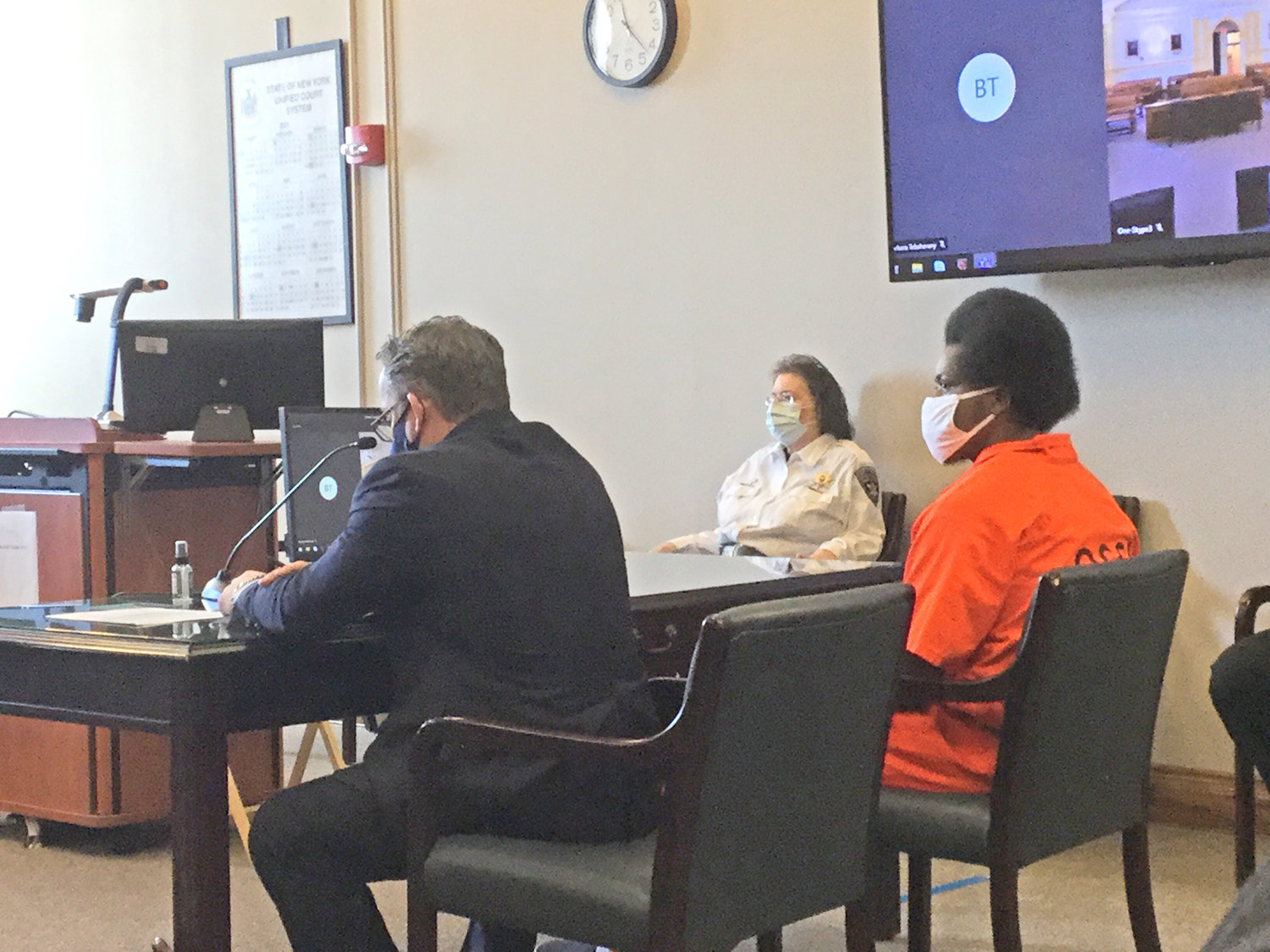 SUPPRESSION HEARING HELD — Travon Golden, of Canandiagua, appeared for a suppression hearing in County Court on Monday. Golden is one of two men charged in the August shooting of Tyler McBain in Oneida Castle. A trial is tentatively scheduled for the fall.
(Sentinel photo by Sean I. Mills) 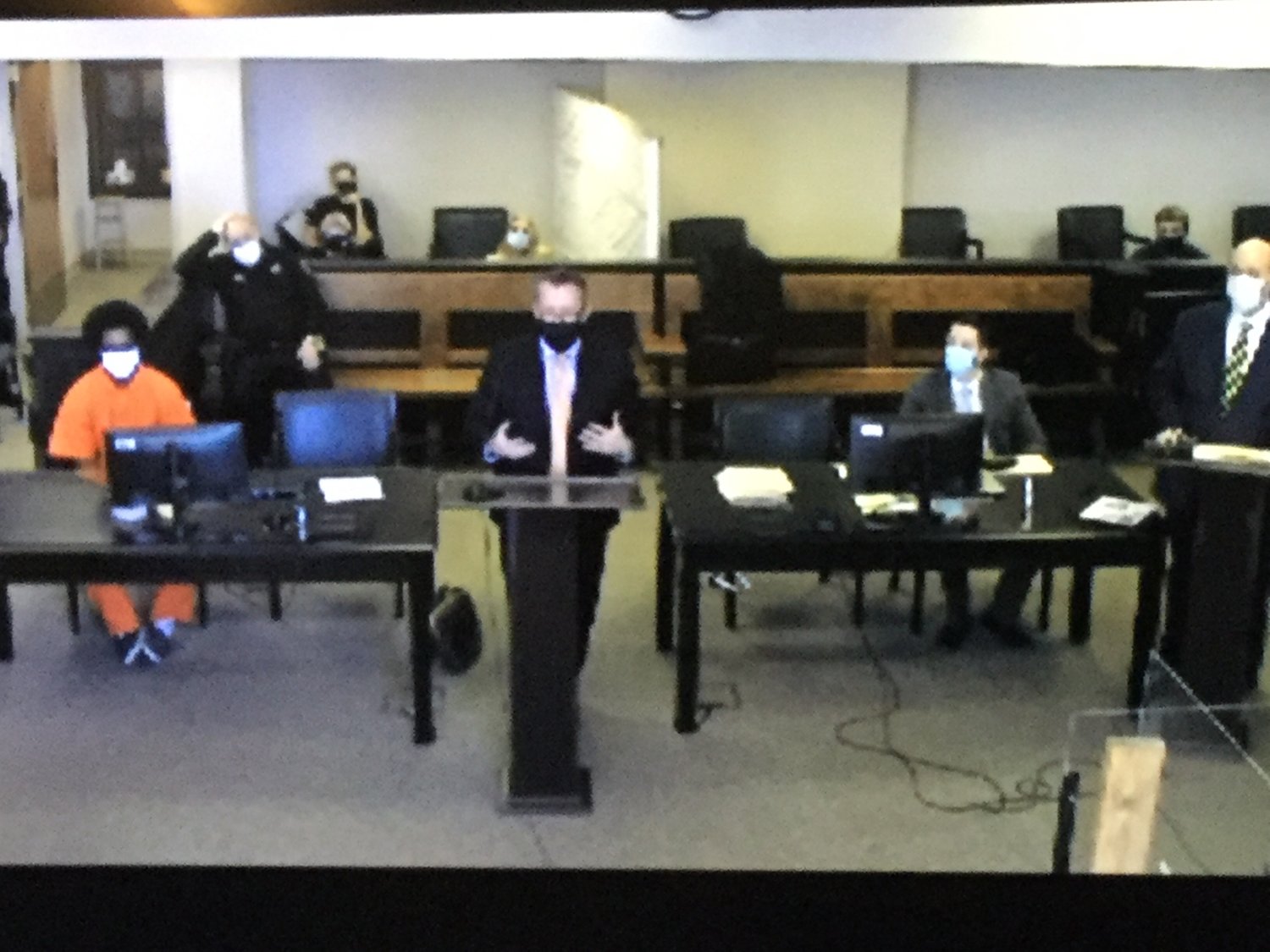 SUPPRESSION HEARING HELD — Travon Golden, of Canandiagua, appeared for a suppression hearing in County Court on Monday. Golden is one of two men charged in the August shooting of Tyler McBain in Oneida Castle. A trial is tentatively scheduled for the fall.
(Sentinel photo by Sean I. Mills)
Previous Next
Posted Monday, March 8, 2021 5:40 pm
Sean I. Mills
Staff writer
email / twitter

ONEIDA CASTLE — A 5-hour state police interrogation was the subject of a County Court suppression hearing on Monday for one of the two men charged in the August homicide of 22-year-old Tyler McBain.

Four state police witnesses took the stand to describe how Travon Golden, 23, was taken into custody on the Thruway following a pursuit and crash in Seneca County.

Court officials said a jury trial is tentatively scheduled for the fall, and at least one of the defense attorneys has requested separate trials. Both men are scheduled to reappear in court on May 24.

Authorities said at 1:30 p.m. Aug. 4, Collier and Golden traveled to the home of Tyler McBain on Seneca Avenue in Oneida Castle and stole 2 1/2 pounds of marijuana from McBain. Authorities said Collier shot him once, and the bullet hit McBain in the arm and then traveled into his chest.

A neighbor living below McBain heard the scuffle, saw at least one man fleeing the house and gave state police a description of two men fleeing in a black SUV.

Trooper Robert R. Lurch Jr., of Canandaigua, testified on Monday that he was on routine patrol in Seneca County when he heard about the pursuit and homicide over the police radio. Lurch told Judge Michael L. Dwyer that he realized he was in the area where the vehicle was last spotted, so he went to help.

Authorities said the black SUV crashed into a ditch near the Waterloo Premium Outlets in the Town of Junius, and no one was inside when troopers found the vehicle.

Lurch testified how he was out searching near the Thruway when he spotted a black male walking on the shoulder, near a bridge.

“I just told him to stop where he was and interlace his hands behind his head. My pistol was drawn,” Lurch testified on Monday.

He said the suspect complied and Lurch put him into hand-cuffs. Lurch said the man’s “proximity” to the crash led him to believe he was the wanted suspect.

“I asked him what happened. He said he didn’t know. He asked if his mother’s car was OK,” Lurch testified.

State Police Inv. Jeffrey Duck, of North Syracuse, testified that he conducted the interview with Golden once he was brought to the state police offices in Waterloo. Duck testified that he read Golden his Constitutional Miranda Rights, and that Golden said he understood his rights and was willing to speak with investigators.

Specifically, Duck said Golden mentioned wanting to find out what happened as much as the investigators. Duck also said Golden leaned forward and made eye contact, then proceeded to answer questions. Golden’s defense attorney, Daniel DuBois, of Rochester, questioned whether that was legitimate approval. DuBois noted that Golden leaning forward is not the same as a nod.

DuBois also noted that Duck and the investigators lied to Golden during the interview, not revealing until later that McBain was dead.

“We generally don’t like to reveal the status of a deceased person in case they don’t already know they’re deceased,” Duck explained.

On roughly two occasions during the 5-hour interview, Golden mentioned an attorney, Duck said. In the first instance, Duck said Golden wanted to telephone his mother because she would want him to have an attorney, but Golden added, “he thinks for himself,” according to Inv. Duck.

Later in the interview, Duck said that Golden again asked to speak to his mother because he might need a lawyer. Duck said the investigators determined that was enough of a request for counsel that they would stop the interrogation, though he added that they asked a few more questions about Golden’s welfare, his mother and the vehicle.

Following Monday’s hearing, Judge Dwyer said he would decide at a later date whether or not to allow Golden’s interview to be used at trial.