UPDATED: One dead in Camden house fire, cause under investigation, deputies say

One woman was killed in a house fire on Voorhees Avenue in Camden Monday night and the fire remains under investigation, according to the Oneida County Sheriff's Office.

UPDATED: One dead in Camden house fire, cause under investigation, deputies say 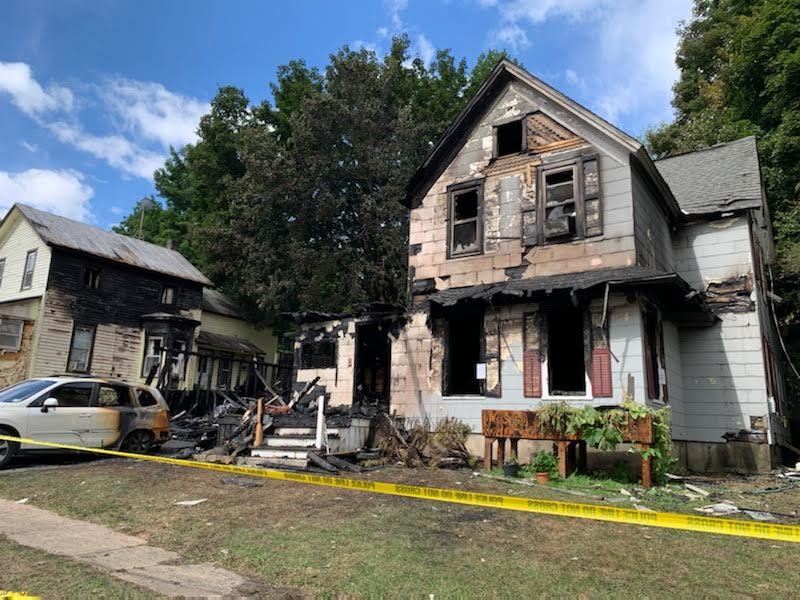 One woman was killed in a house fire in Camden on Voorhees Avenue late Monday night, according to the Oneida County Sheriff's Office. Multiple local fire departments battled the blaze for several hours before it was under control. The cause of the fire remains under investigation.
(Sentinel photo by John Clifford)
Posted Tuesday, July 26, 2022 11:39 am
Sean I. Mills
Staff writer
email / twitter
CAMDEN — One woman was killed in a house fire on Voorhees Avenue in Camden Monday night and the fire remains under investigation, according to the Oneida County Sheriff’s Office.
The victim has been identified as 35-year-old Brittany Jones, a resident of the home, investigators said.
The alarm was raised around 9:45 p.m. Monday at 17 Voorhees Ave. Volunteers from eight area departments responded to the scene and found the 2 1/2-story residence fully involved, officials said.
“A neighbor saw some flames,” said Sheriff’s Lt. Richard Paul on Tuesday. Voorhees Avenue is located on the west side of the village.
“One went over and tried to pound on the door, the other called 911.”
Responding officers learned quickly that one of the residents was believed to be trapped inside the home, authorities said. Jones lived at the residence with her husband, Aaron, and their 12-year-old son, according to family members.
Firefighters battled the blaze for several hours before it was brought under control. Authorities said two other neighboring homes sustained some damage from the fire.
“The neighbor’s house actually caught on fire,” Lt. Paul stated. “And there was a neighbor’s house across the street where some of the fire melted the siding.”
Once it was safe to enter, rescue personnel went into the home and found Jones's body. Authorities said Jones was taken to the Onondaga County Medical Examiner’s Office for an autopsy to determine the exact cause of death.
Lt. Paul said a 12-year-old family member was able to escape the house.
The cause of the fire remains under investigation by the Sheriff’s Office. The fire does not appear to be suspicious, officials said.
Camden, McConnellsville, Taberg, Florence, Durhamville, North Bay, Sylvan Beach and Williamstown fire departments responded to the scene, with Vienna on standby.
A GoFundMe.com fundraiser has been set up for the Jones family to recover.
"The loss of a family member will never be replaced. My brother lost his wife. My nephew lost his mother. She saved her son's life and made sure he got out of the house," the family wrote on GoFundMe.
"Money is the last thing on their mind now. But they have lost everything. All they have is the clothes on their back."
The fundraiser had already raised more than $5,000 within one day of the fire. The fundraiser can be found under the title "Fatal House Fire" on GoFundMe.com