At the heart of the Hamilton community lies an old train depot. Though its rails and passengers are long gone, its line carries a new legacy: one of history. 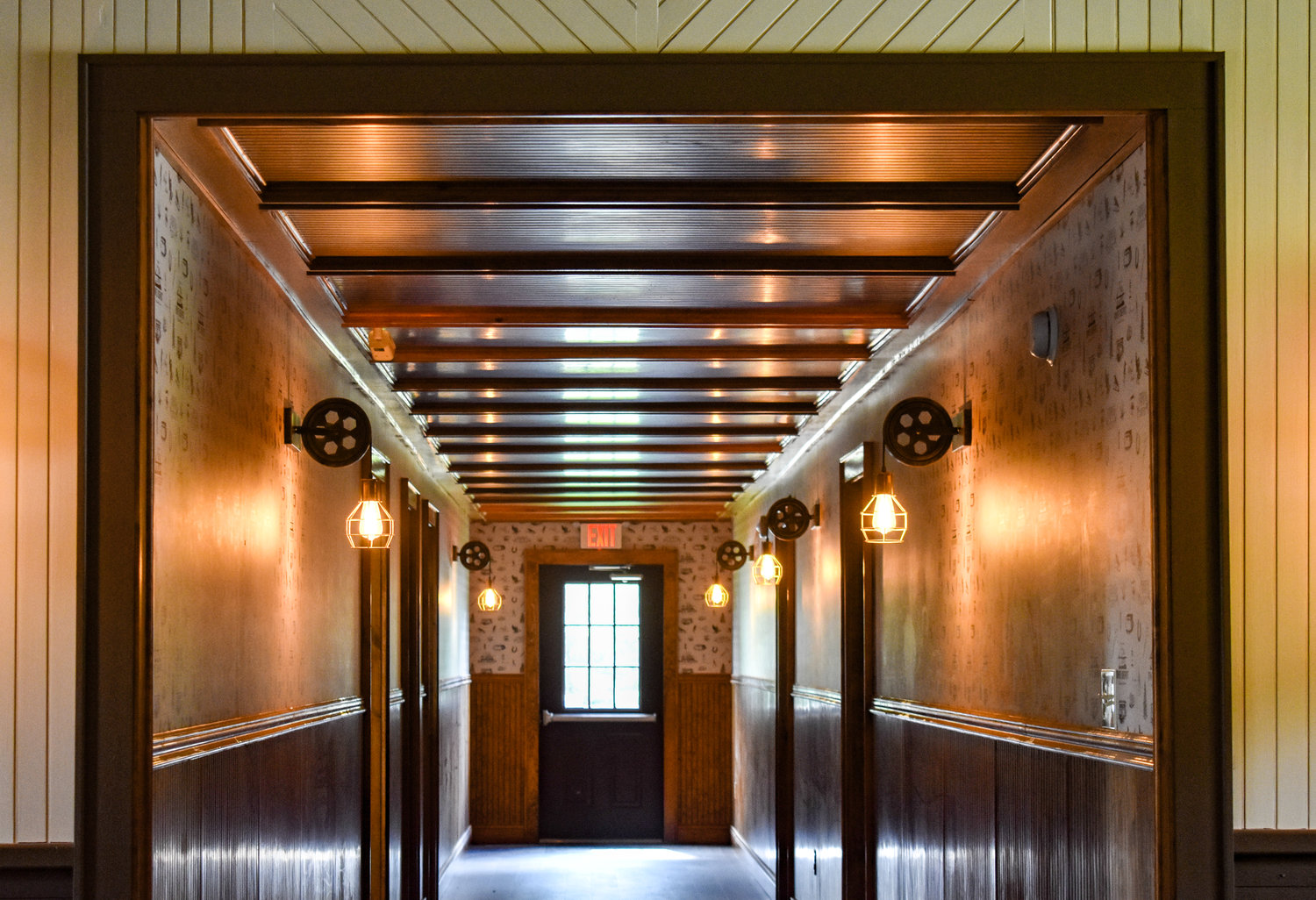 The remodeled inside of RW3 Depot has space for several tenants. In this hallway, guests can currently find Sandra Ray Beauty Co. and Clifford's Barber Co.
(Sentinel photo by Carly Stone) 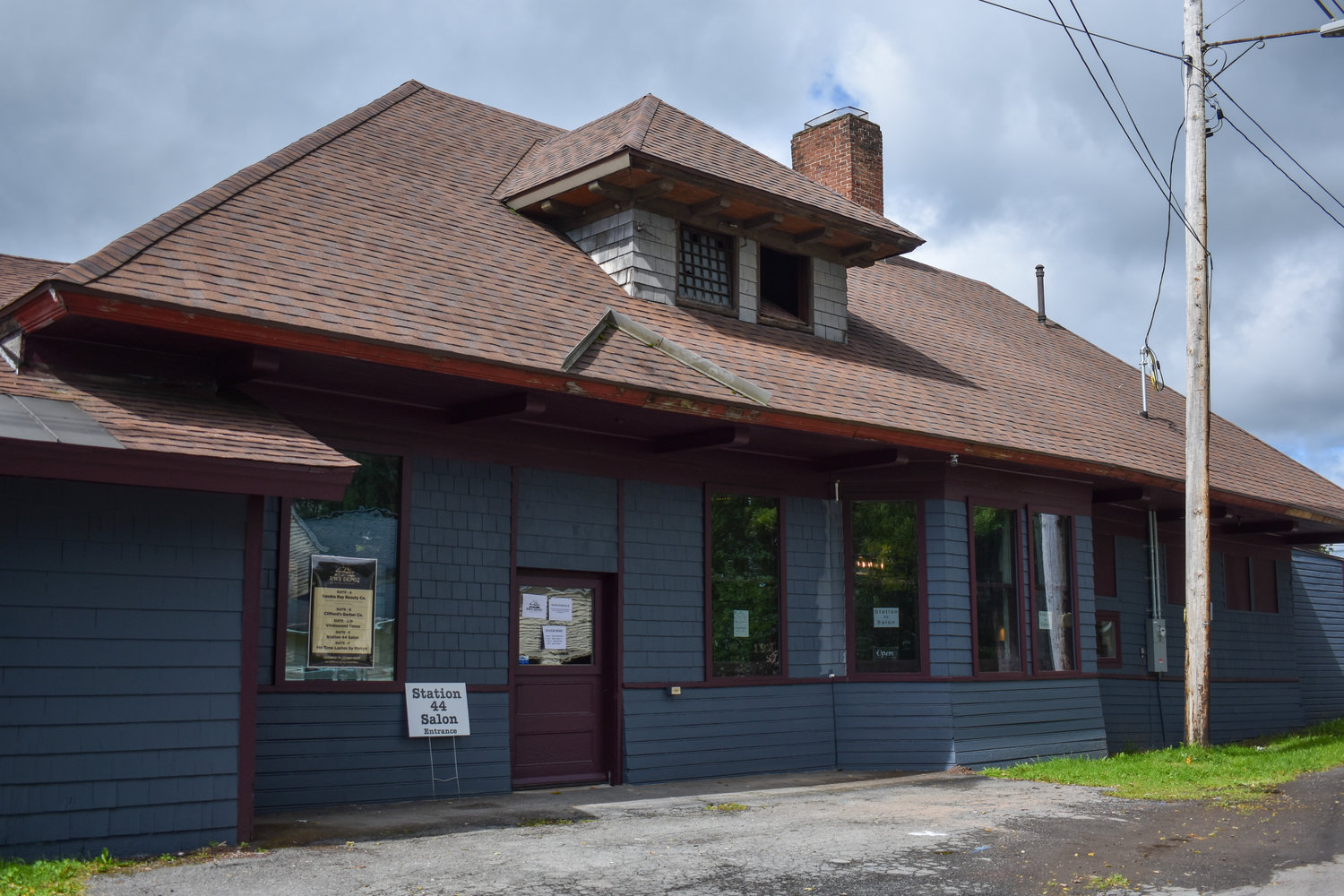 What used to be called Ray’s Wayside, RW3 Depot sits at 44 Milford Street in Hamilton. The interior space has been recently transformed by brothers Colin and Tucker Ray.
(Sentinel photos by Carly Stone) 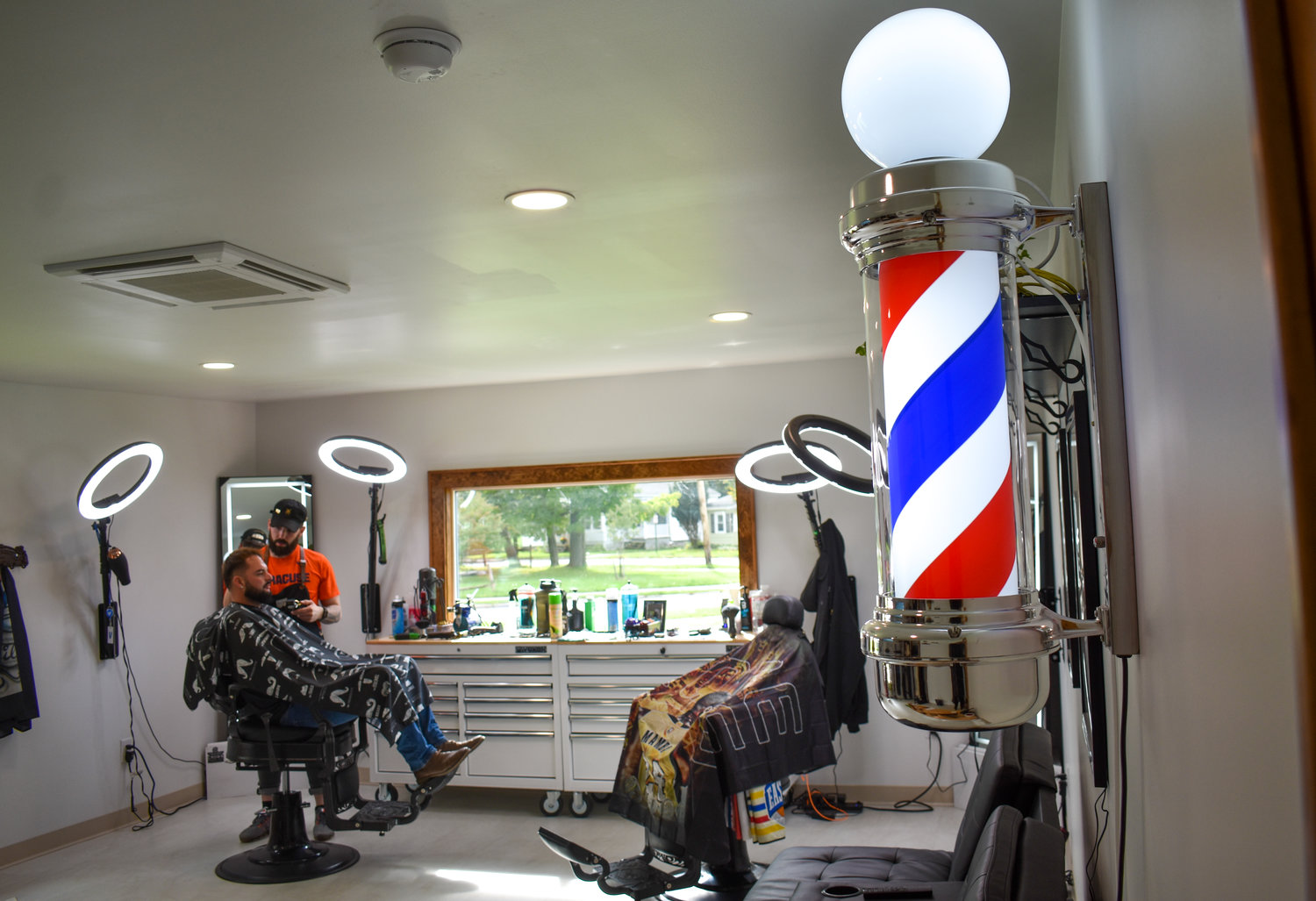 A patron gets a haircut at Clifford’s Barber Co. at RW3 Depot in Hamilton recently.
(Sentinel photo by Carly Stone) 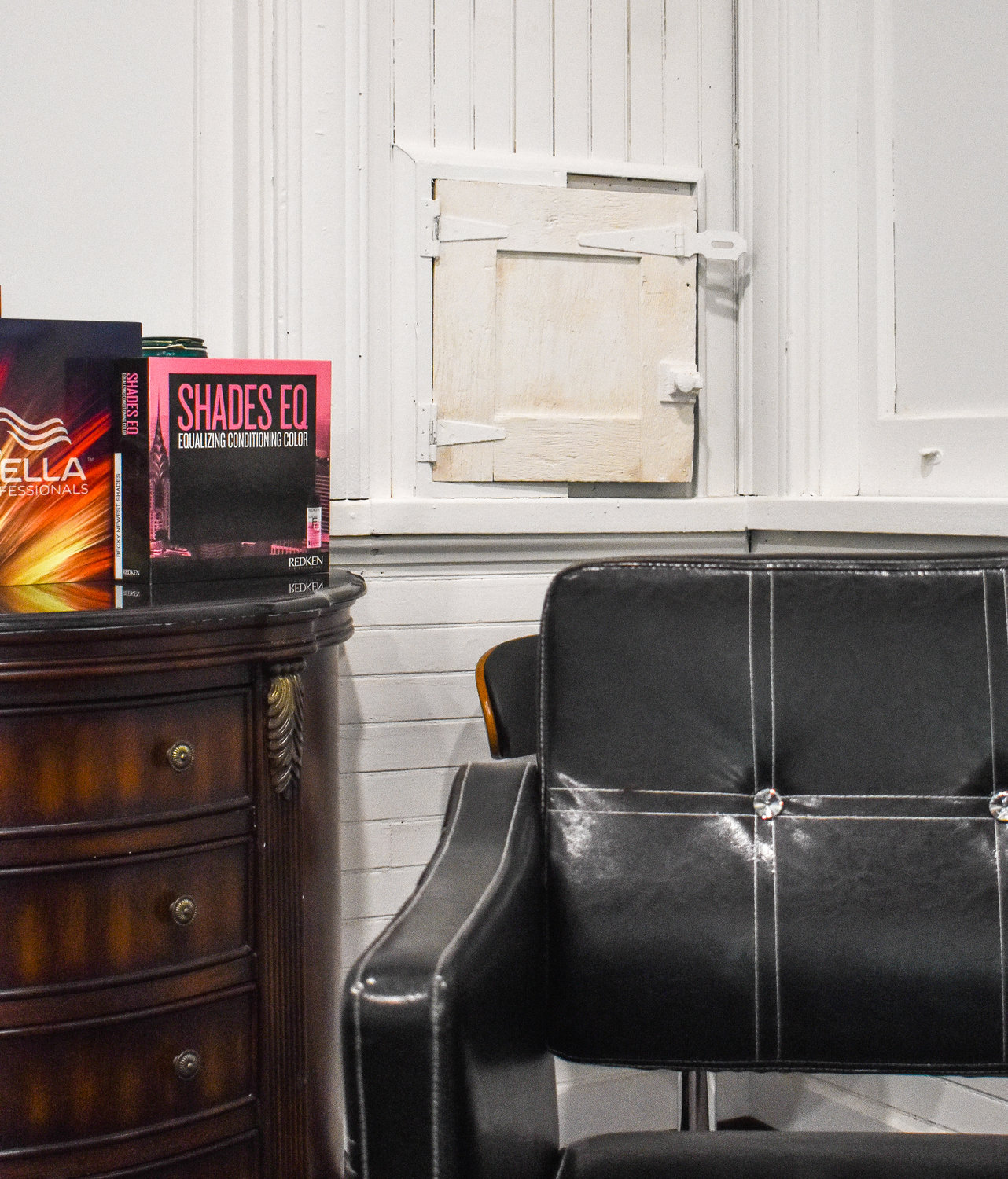 An old ticket box, a remnant of the train station's past, can be seen inside Station 44 Salon at RW3 Depot.
(Sentinel photo by Carly Stone) 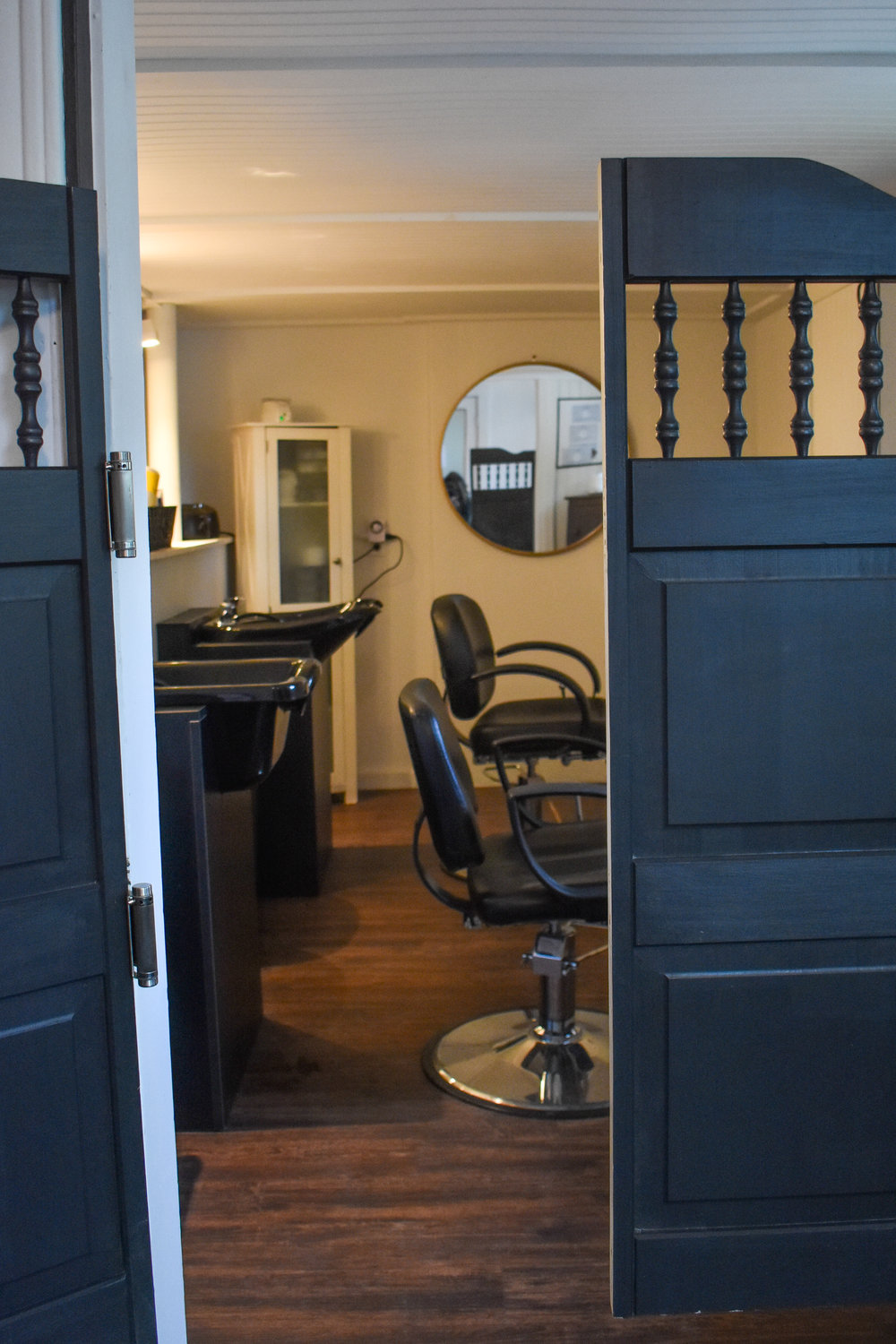 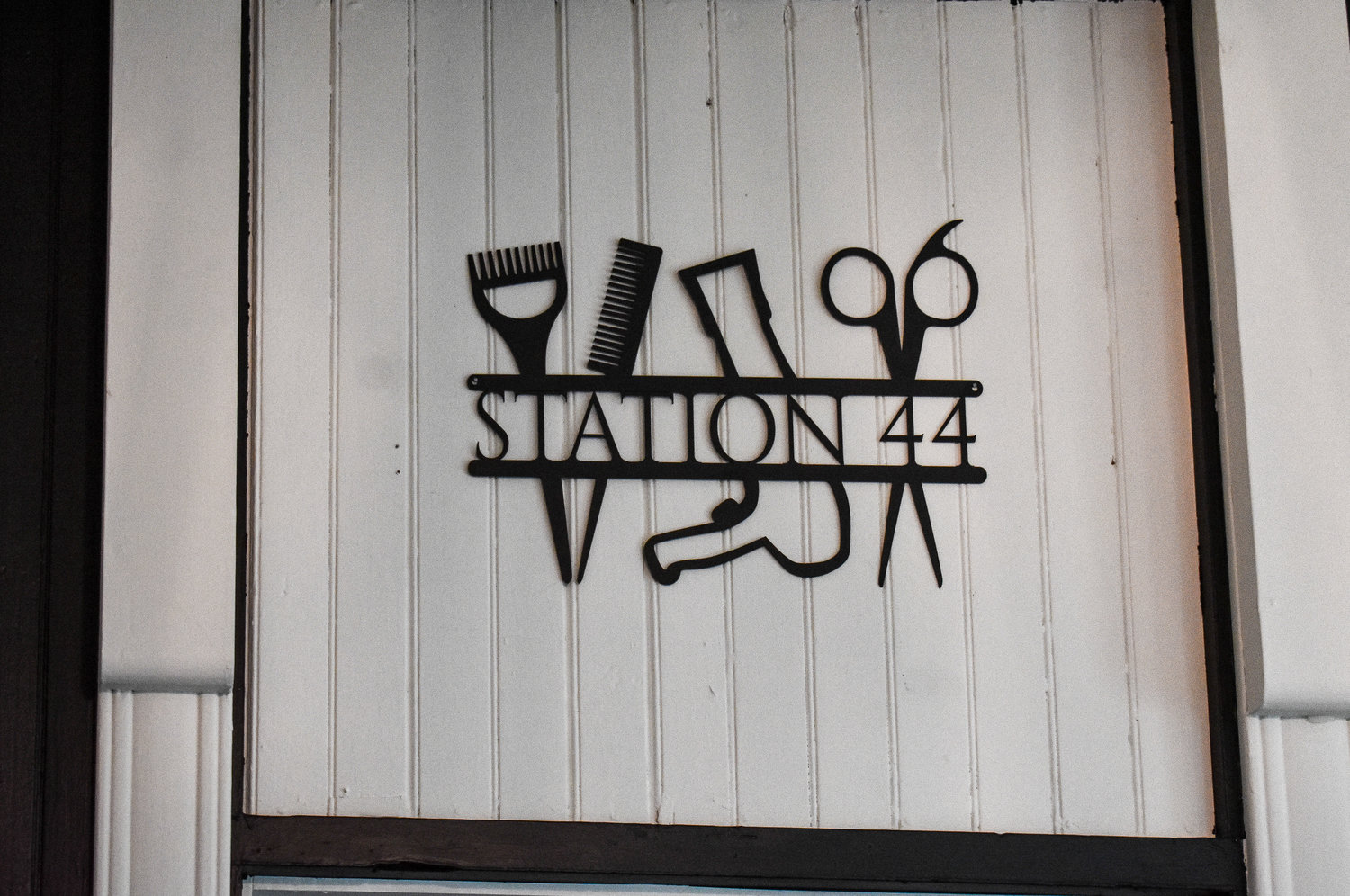 Station 44 Salon is one of three current tenants at RW3 Depot in Hamilton. Two more tenants are planned to soon arrive.
(Sentinel photo by Carly Stone) 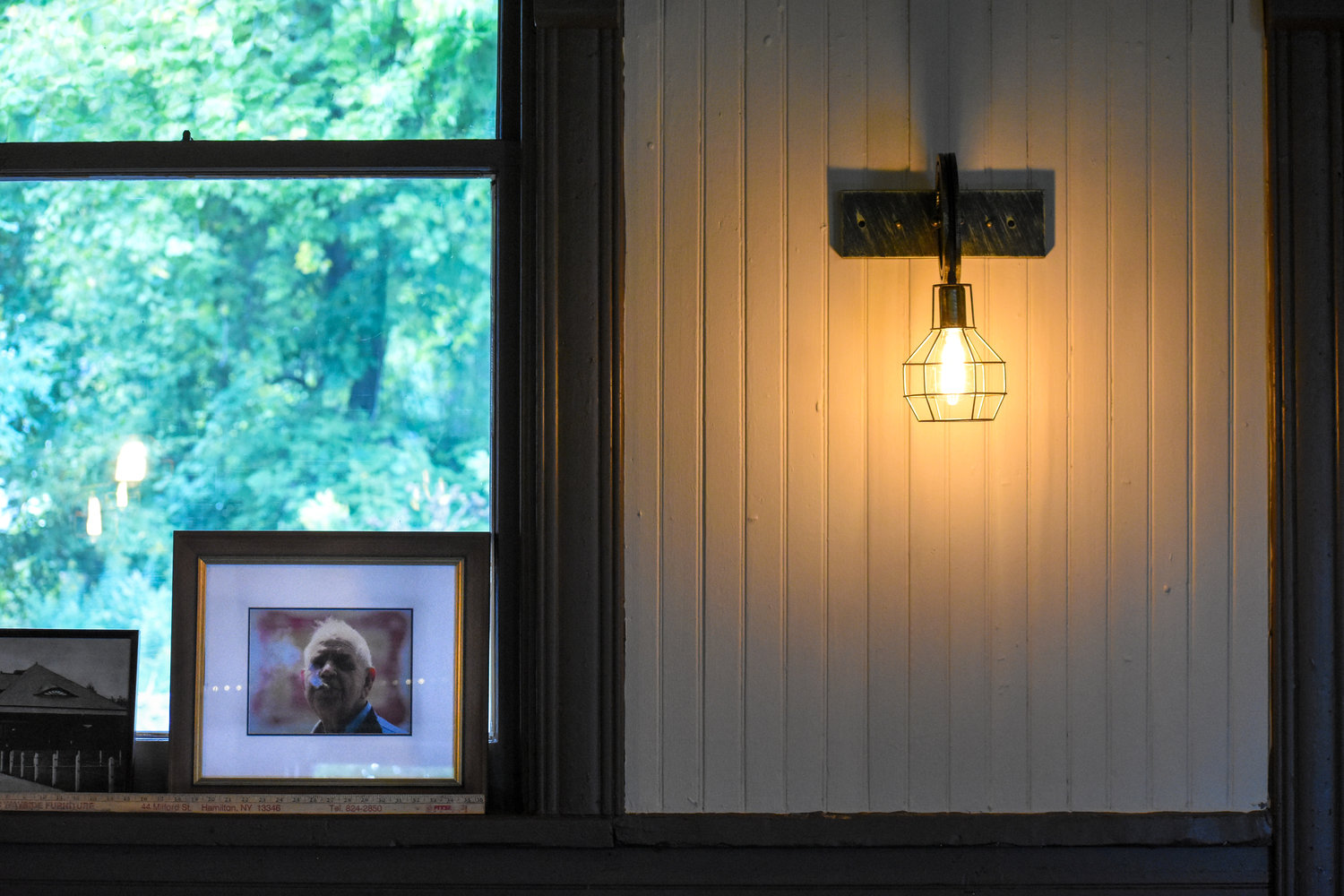 The interior of RW3 Depot features elements original to the train station along with new ones designed to blend in. This window is original, but the light fixture is new.
(Sentinel photo by Carly Stone) 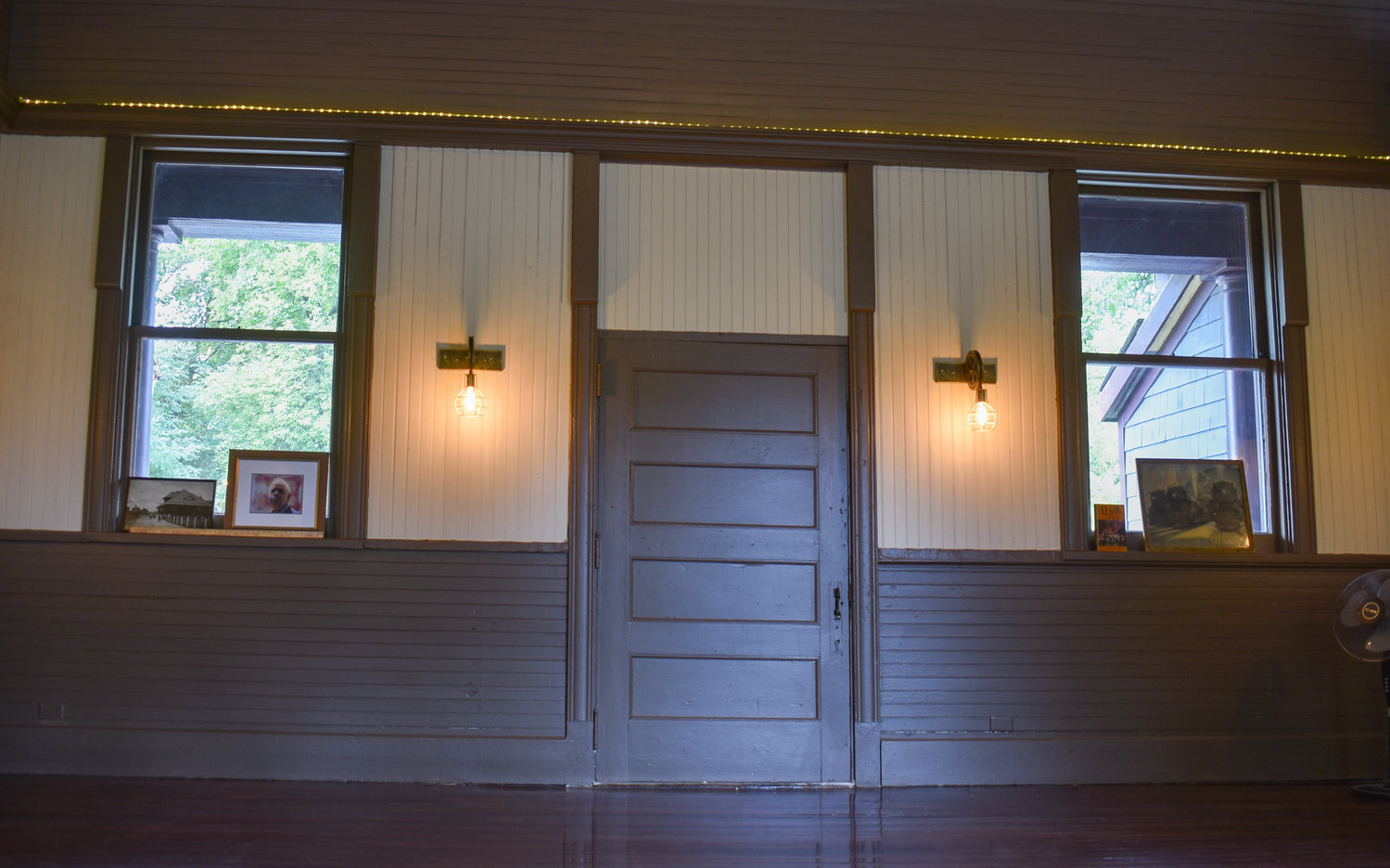 This door would have led guests out of the train station waiting room and out to board a locomotive. No longer functioning, the door is a decorative reminder of the past.
(Sentinel photo by Carly Stone) This wallpapered hallway is part of an addition made decades ago at 44 Milford Street. Customized wallpaper combines the old and the new, showcasing images of each tenant’s craft in a vintage style. “RW3 Depot,” which calls back to the building’s third-generation family lineage, is sprinkled throughout.
(Sentinel photo by Carly Stone) 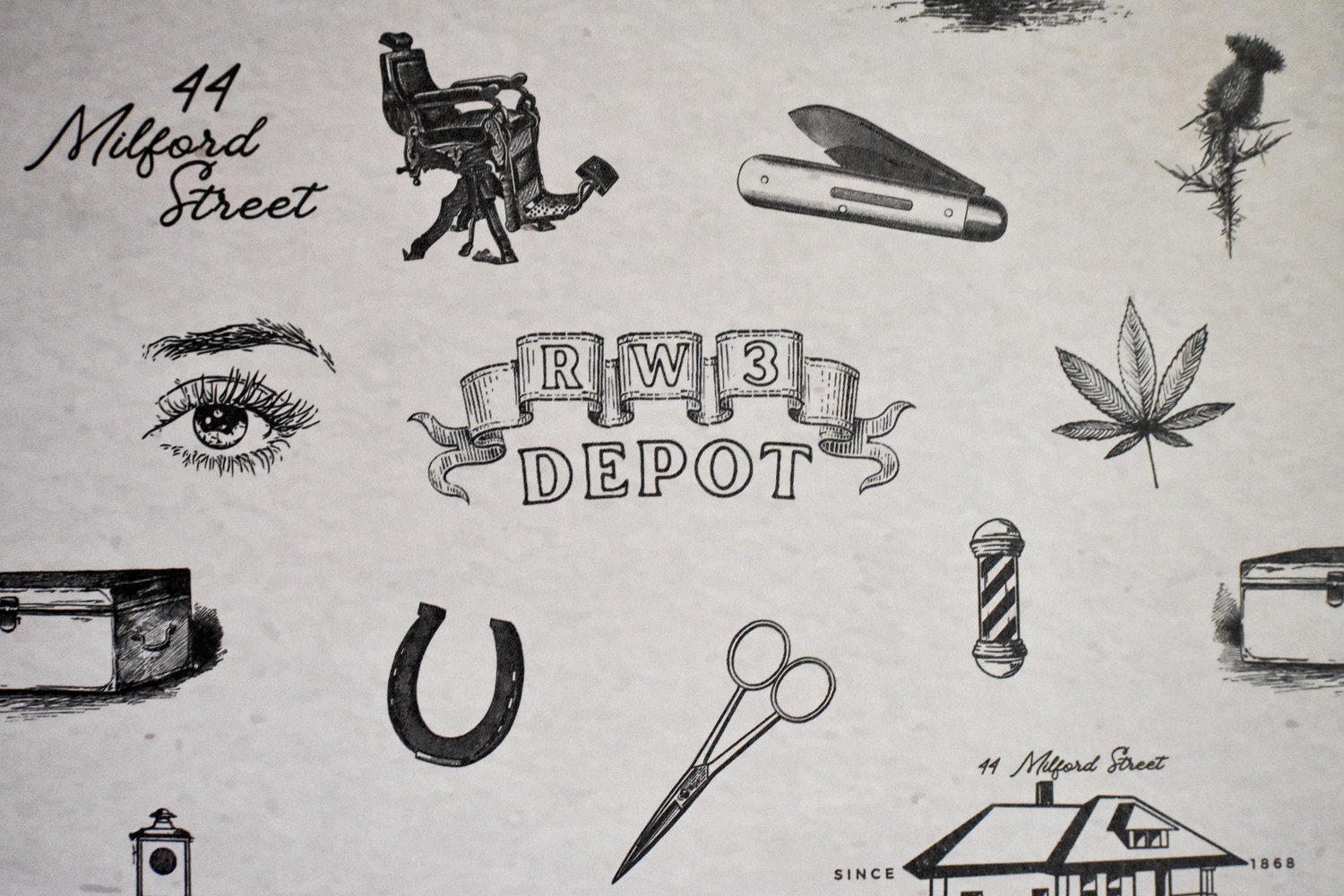 Customized wallpaper combines the old and the new, showcasing images of each tenant’s craft in a vintage style. “RW3 Depot,” which calls back to the building’s third-generation family lineage, is sprinkled throughout.
(Sentinel photo by Carly Stone) 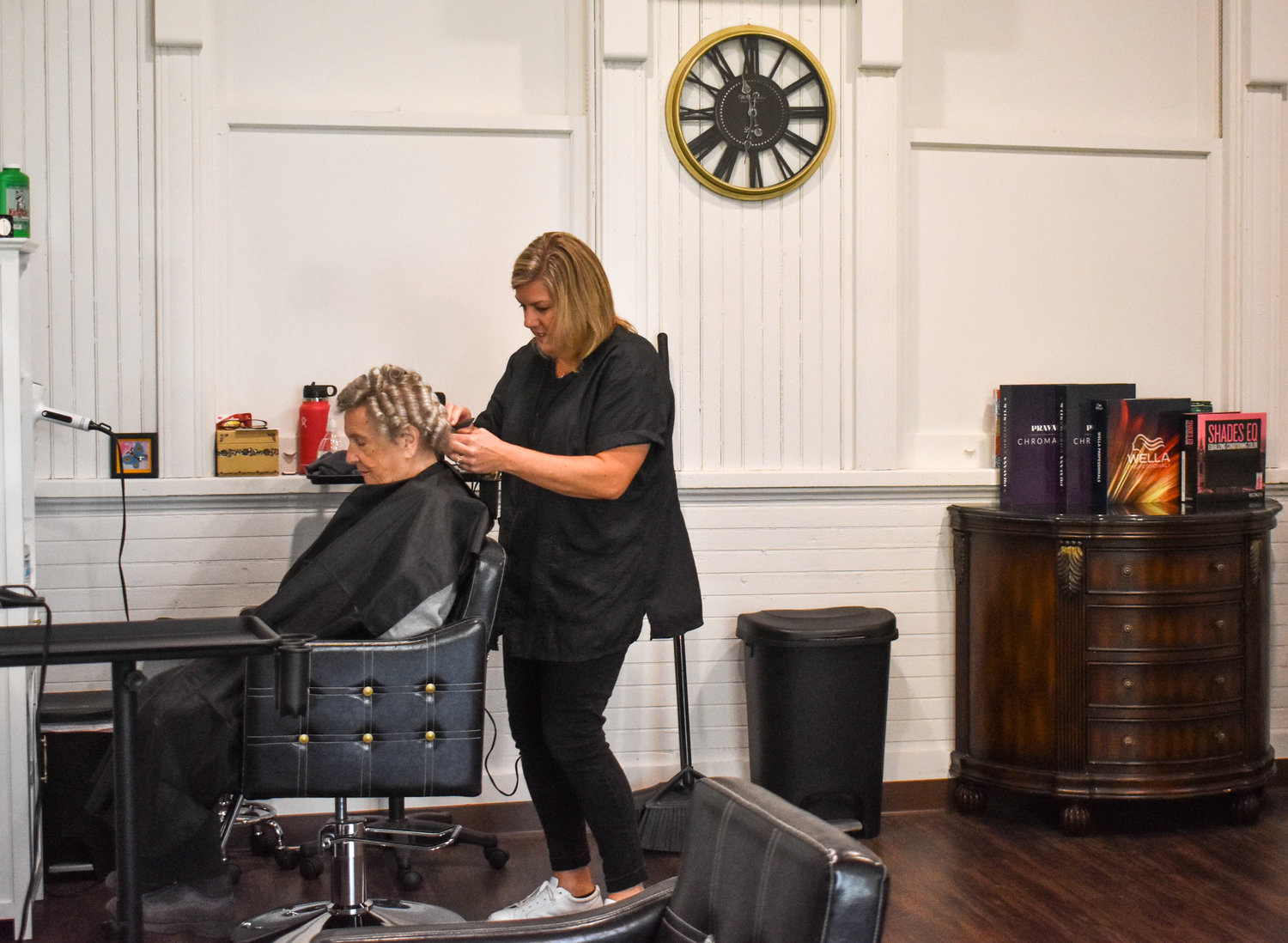 A patron gets her hair done at Station 44 Salon located inside RW3 Depot at 44 Milford Street, Hamilton.
(Sentinel photos by Carly Stone) 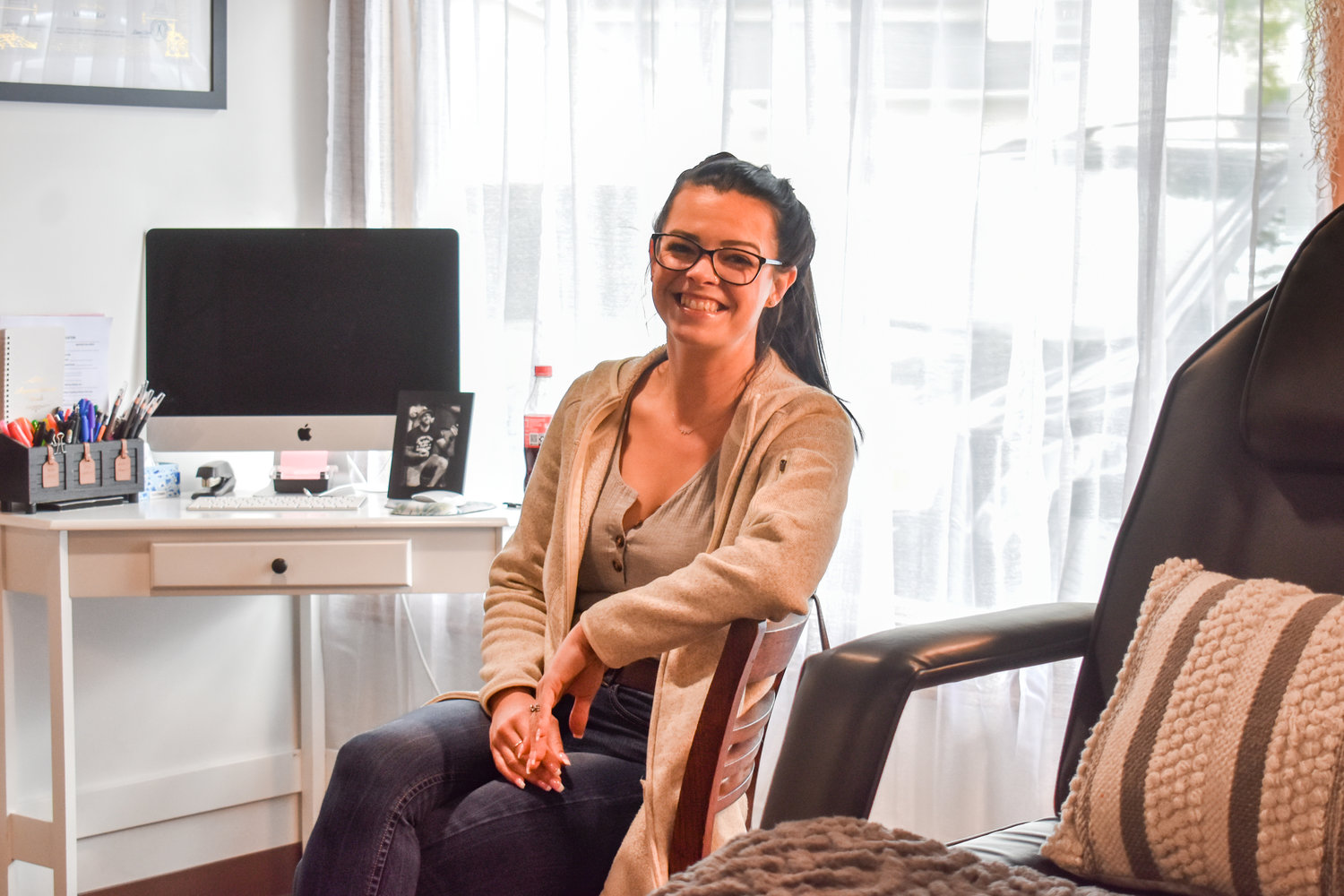 This area inside Sandra Ray Beauty Co. is where microblading services are performed. Owner Sandra Ray said she likes to evoke a welcoming, positive vibe throughout her space.
(Sentinel photos by Carly Stone) Jared Jillson puts some finishing touches on one of his clients. He's been practicing barbering since he was 15 and now does so professionally out of his business, Clifford's Barber Co., located at 44 Milford Street, Hamilton.
(Sentinel photos by Carly Stone)
Previous Next
Posted Wednesday, September 28, 2022 2:10 pm
Carly Stone
Staff writer
email / twitter

HAMILTON — At the heart of the Hamilton community lies an old train depot. Though its rails and passengers are long gone, its line carries a new legacy: one of history, family, and most recently, opportunity.

The station at 44 Milford Street was connected to the New York, Ontario and Western (O and W) Railway, a railroad that operated until 1957. According to Joan Prindle, chairman of the Hamilton Historic Commission, the exact date the structure was built is unclear, but its official open house was held on May 25, 1899. A freight station previously stood in the passenger station’s place. Continuous passenger services ceased at 44 Milford in 1932.

By the time Russell Ray acquired the Hamilton station upon his return from WWII, it was just a building with potential.

He transformed the space into Ray’s Wayside, a home hardware and interior store fulfilling a demand for paint, furniture, flooring, and more when big box stores were hard to come by. He also provided custom framing services, particularly to a special client, Vantine Imaging.

Business went on for decades, and as time would have it, a new owner would eventually take over. That owner was Russell’s son, Eddie Ray, who continued the business from 1990 until around 2015.

Change was again inevitable, but the depot would stay in the family once more.

Eddie is the uncle of Tucker and Colin Ray, brothers and owners of the famed smoked-meat and entertainment venue in Bouckville, Ray Brother’s BBQ. Seeing the possibility in the old station, the pair purchased the property as third generation owners and built upon it a new life, nestled in history.

While this is a Ray Brother’s venture, it has nothing to do with the restaurant.

RW3 Depot currently houses three vendors, soon to be four, in a space reflective of its past.

Visitors enter first into what used to be the train waiting room before patroning Station 44 Salon, Sandra Ray Beauty Co., and Clifford’s Barber Co. Viridescent Times will soon accompany them.

The bones of the old depot are on display and its character embraced through its decor. Staying true to the time period with renovation performed by Brouillette Construction and with help from local Mennonites to match the old wood, the interior features original windows, doors, floors, and even an added surprise, Tucker shared — original vaulted ceilings uncovered during the remodel.

From the entrance to the right is all the original structure, to the left is an addition made decades ago. On the original side in Station 44 Salon, one can find an old ticket door.

To the front of the building, the area where passengers would exit the station and funnel into the train has been uncovered.

Other details such as new doors built to look old and industrial light fixtures add to the old-time aesthetic. Customized wallpaper combines the old and the new, showcasing images of each tenant’s craft in a vintage style. “RW3 Depot,” which calls back to the building’s third generation family lineage, is sprinkled throughout.

“These boys have provided members of the community the ability to branch out on their own, and to really have opportunities that we otherwise wouldn’t have had,” said Sandra Ray, owner of Sandra Ray Beauty Co. and Tucker’s wife.

Before moving in, her services were limited to airbrush tanning. Now with more possibilities, she has added microblading, chromotherapy, and infrared sauna therapy to her service lineup.

And, tenants have the freedom to put their own spin on their designated space, Sandra said, which has helped the depot and the businesses come to life.

Jared Jillson, owner of Clifford’s Barber Co., shared, “Tucker and Colin are definitely two of my biggest supporters, even back before I was anything. Back before I was barber Jillson, which is what I went by....back before I could afford my own clippers, they bought me clippers and stuff. Honestly, they gave me the biggest stage I’ve ever performed on by being here. I love being a part of it.”

Jared is Sandra’s cousin, making the partnership with RW3 Depot all the more meaningful.

The young barber who has been honing his skill since 15 years old said he appreciates the chance to grow and share his ideas with Tucker and Colin, who are a receptive audience.

“They’re just such ambitious people that it’s awesome to be around that energy,” he remarked.

Viridescent Times, who’s yet to open, will feature their own line of NYS grown, natural, and organic CBD and a marijuana dispensary pending license approval.

A fifth tenant, Me Time Lashes, is expected to open in the next year.

As the tenants settle in and a new era begins at 44 Milford, the Ray brothers are excited to see its impact. “I think anytime you add good entrepreneurship in communities, I think it builds that community. I think those are the things that shape each and every little town you go to,” Tucker said.

An open house is set for sometime within the next month.