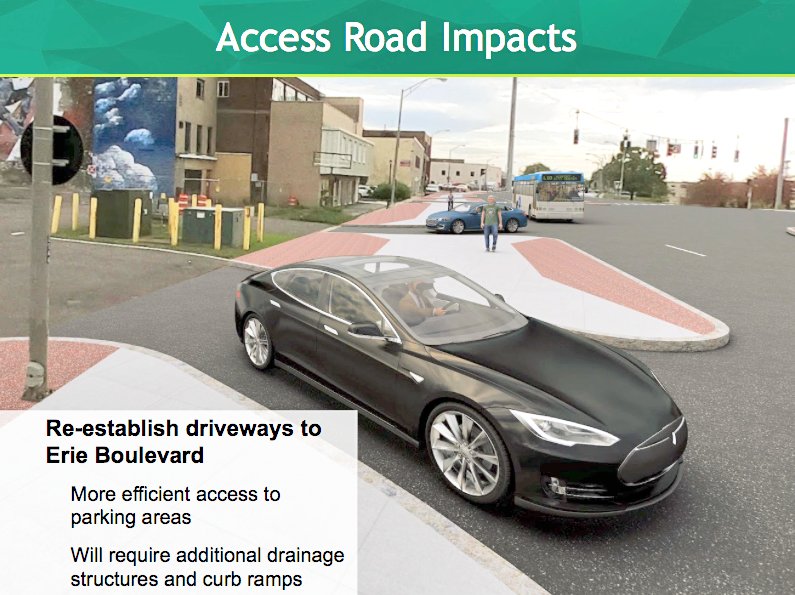 BOULEVARD IMPROVEMENTS — More efficient access to parking areas will be included in the approximate $2 million Erie Boulevard Transportation Alternative Project, that will be paid for through state funding. Plans will be finalized in fall 2022, and city officials are now accepting comments and suggestions for the project.(Image courtesy City of Rome)

MAKING IT SAFER — Wider medians and median walls for safer pedestrian crossing are being considered as part of the Erie Boulevard Transportation Alternative Project.

PLANNING STAGES — This photo shows the existing median and a rendering of a median wall as part of improvements being considered for the Erie Boulevard Transportation Alternatives Project, which includes the Freedom Plaza corridor that runs between George and James streets. (Illustration courtesy City of Rome)
Previous Next
Posted Thursday, November 11, 2021 7:10 am
Nicole A. Hawley
Staff writer
email

Plans and designs for making the Erie Boulevard West Freedom Plaza corridor a safer, more pedestrian and bicycle-friendly area were presented during a special meeting held at the Capitol Theatre Tuesday evening.

About a dozen community members and city officials were present to hear options being considered by Greenman-Pedersen, Inc. Consulting Engineers, of Albany, for the approximately $2 million Erie Boulevard Transportation Alternative Project, which is being paid for through state funding. The infrastructure improvement project would be included among the city’s Downtown Revitalization Initiative efforts.

GPI Project Engineer Jeffrey Gentzler said designers “want a more pedestrian and bicycle-friendly area and to actually promote bicycle use within that corridor,” which runs between James and George streets. Gentzler said plans are to have the project eventually include improvements up to Madison Street once funding becomes available.

“We must also evaluate existing traffic signals to see if they’re significant in what’s needed for pedestrian traffic,” Gentzler added.

Among the goals are to also create on-street parking; improve boulevard building frontages to address vacancy and associated blight in the neighborhood; improve the streetscape aesthetics; facilitate access into existing parking lots and the parking garage; reassess and consolidate traffic signage within the corridor; and reduce stormwater runoff to make the area “more green” in design.

Plans are to also create “islands as refuge” for pedestrians at major crosswalks.

According to a GPI traffic study, about 28,000 vehicles travel through the corridor each day, and that number has increased by a half-percent growth rate per year over the last decade. Going by 85-percentile speeds, which are “industry standards for design purposes and options,” said Gentzler, vehicles travel an average 37-38 mph through that area.

Part of the plan is to also provide an east-west connection to the corridor and improve north-south access — connecting residential areas to the north with the commercial areas to the south. Gentzler said a separate project being conducted by the state Department of Transportation — the Empire State Trail — may also be incorporated into the boulevard project, which includes a connection between South James Street and West Dominick Street.

Where there is an access staircase leading up to West Dominick Street (from one of the parking lots off the boulevard), Gentzler said the stairs will remain, but an Americans with Disabilities Act access ramp for wheelchairs and those utilizing walkers will also be built, with no more than a 5% slope.

“Right now if you’re in a wheelchair, there’s no way for you to access West Dominick Street…so we plan to run an ADA ramp all the way across,” the project engineer said.

“We also want to repurpose the access road to construct a 14-foot shared-use pedestrian area,” he said. “The existing road is under-utilized and it’s something that can be repurposed. We want to replace the cold concrete work and make it a more warm and inviting space for Downtown.”

The first alternative, Gentzler said, is to entirely remove the access road, which would mean there would be no on-street parking, but the area would provide more space for pedestrians and bicyclists while utilizing the curb line for more landscaping. The second alternative is to shorten the access road, construct about 11 parallel parking spaces for access to building frontages, modify the driveway access and egress to the Aspen Dental/WellNow Urgent Care parking lot and maintain a 3-foot median that’s similar to what exists now.

GPI also wants to reestablish all the driveways to Erie Boulevard to make for more efficient access to parking areas, that will also require additional drainage structures and curb ramps.

Copper City Lofts, a 64-unit apartment complex that’s under construction, and is scheduled to be completed next year, “we’re trying to blend their frontage work and our improvements — we want to get the two designs to marry,” Gentzler said. “There will be 10 short-term bicycle parking (spaces) outside the building, along with 20 inside the building. The parking garage will continue to be exit-only…forcing people to turn right and avoid a left turn.”

“We want to fix the existing refuge islands — they’re suppose to be a minimum 6 feet,” said Gentzler. “We’re also removing or shifting the catch basins so they are not in pedestrian travel.”

For mid-block crossing, plans are to install new curb ramps and refuge islands within the median. There will be rectangular rapid-flashing beacons at each curb ramp to alert drivers to stop.

There are also two alternatives being considered for median improvements. Alternative one, the lower-cost option, would require a “non-standard lane width,” therefore the South George/Freedom Plaza left turn lanes would be less than 11 feet, Gentzler said. Alternative two would be a higher cost, but would establish standard turn lane widths because “there’s so much truck traffic” on the boulevard, he added.

Gentzler said, “Curb line changes would be on the northern side of the median only…That leaves flex space for pedestrians and the turn lanes and travel lanes will all be 12-feet wide, meeting state DOT requirements.”

The city may also consider constructing a median wall to help discourage rogue pedestrian crossings at a 42-inch height, incorporating “context sensitive” design elements, and be a combination of concrete and Flexi-Pave, Gentzler said.

“The goal of the city is to incorporate local colors or elements,” he said. “One idea was to use stamped concrete sides that are colored similar to Blue Stone. If the city desired, it can install fencing on top of the wall to prevent people from crossing over” it.

“With $2 million, we can stretch the design options and what we can put out there,” said Gentzler. “Once funding is available, we can include another phase of the project to include Madison Street.”

The final design process for the Erie Boulevard Transportation Alternative Project will continue through the summer of 2022 and be finalized next fall. Work will go out to bid in the winter of 2023, with construction beginning in the spring. Gentzler said the project is projected to be completed in the summer of 2023.

“No local funding” is involved with the project, “a bond is being used and a DOT grant was applied for, so right now this is 100% state-funded,” he said.

Andrews said he and his office would appreciate receiving any comments about the project from community members. Any questions, comments or suggestions for the project can be made by emailing Andrews at mandrews@romecitygov.com by Tuesday, Nov. 23.