Throughout the Hudson Valley, community volunteers are getting out their flashlights, reflective vests, and rain gear in anticipation of annual amphibian breeding migrations, which typically begin in … 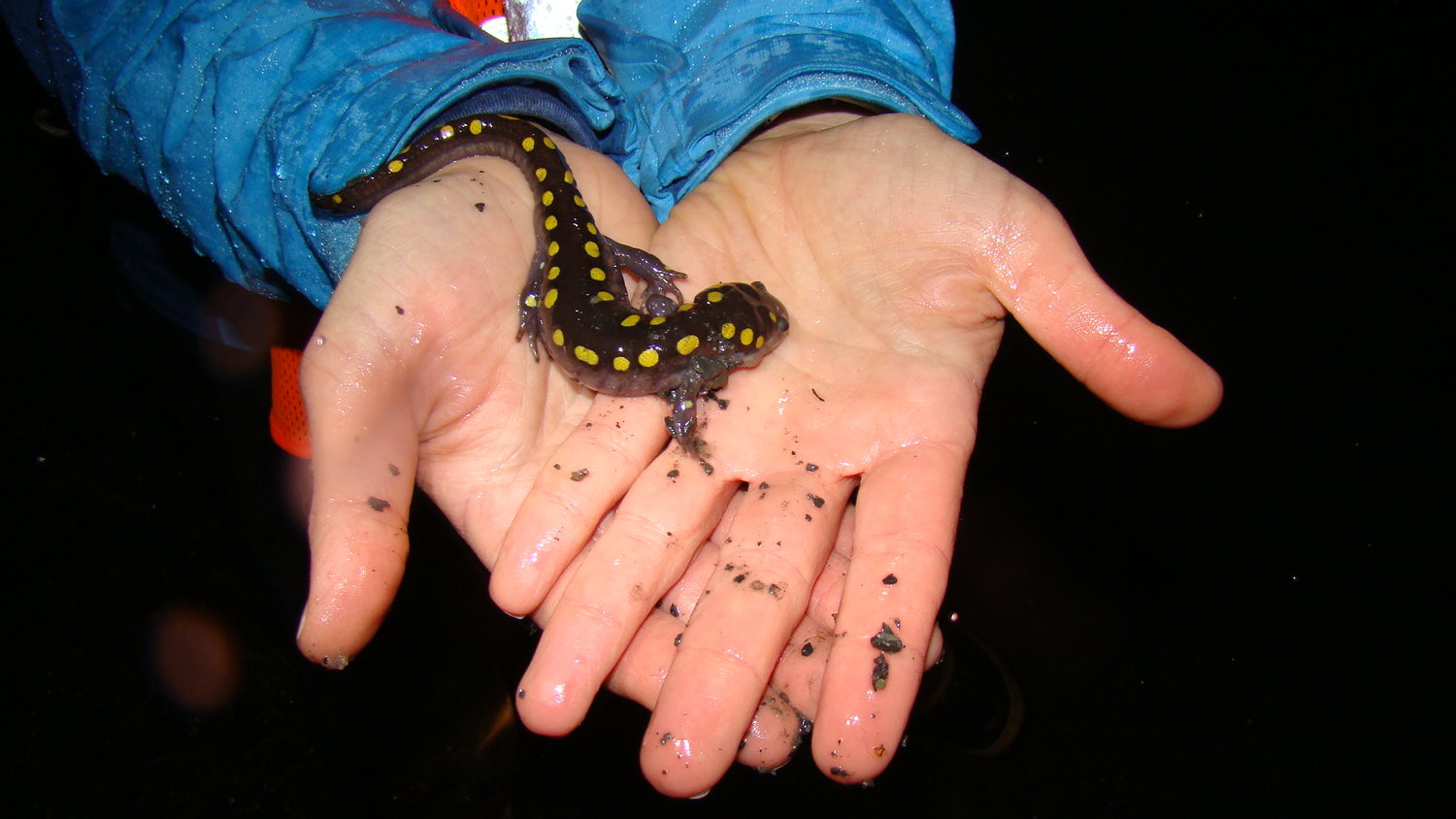 LOOKING FOR LOVE? — A volunteer holds a spotted salamander in this DEC file photo. Volunteers will soon document — and assist — the migration of salamanders and frogs as part of DEC’s Amphibian Migrations and Road Crossings Project.
(Photo courtesy NYSDEC) 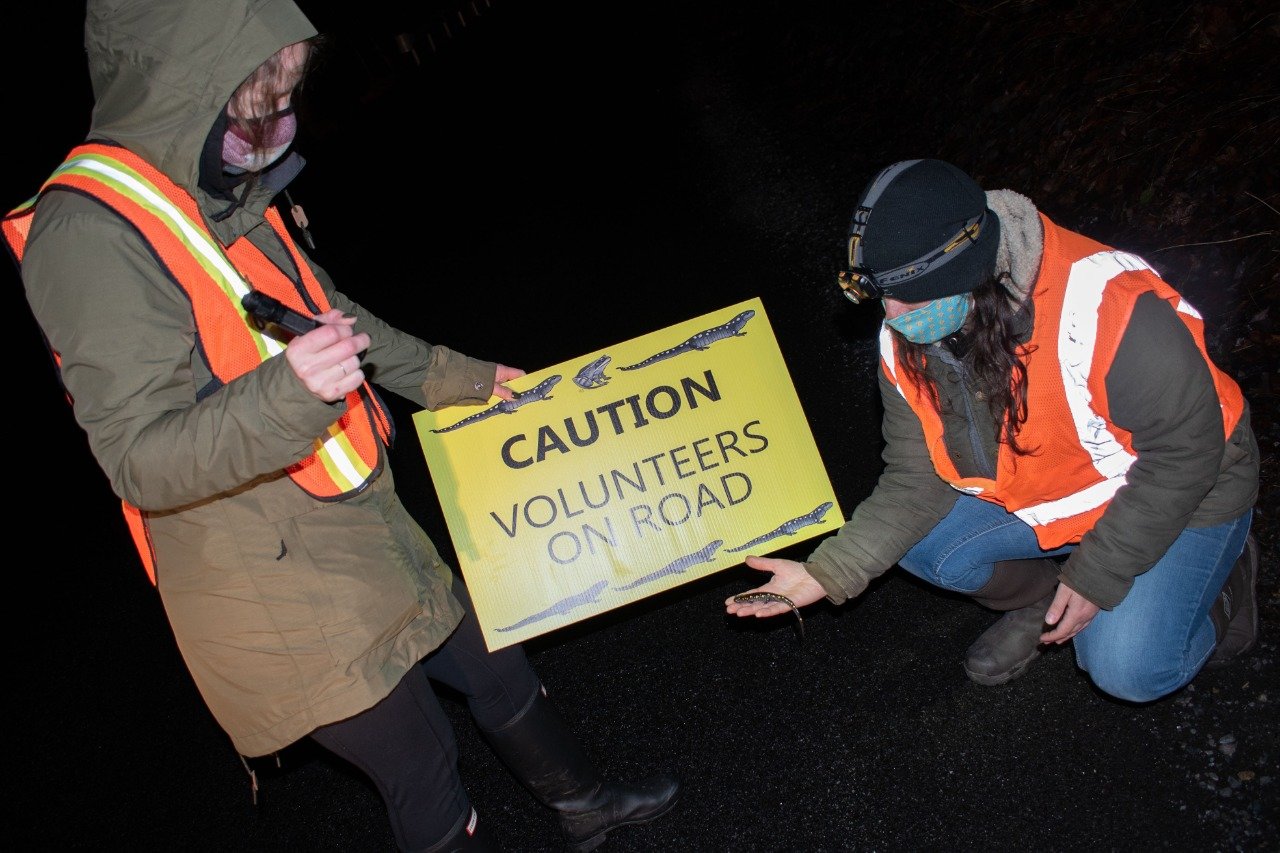 MAY I HELP YOU? — Volunteers equipped with flashlights, reflective vests, and rain gear, help out a wayward salamander in this file photo of an annual amphibian breeding migration in the Hudson Valley. The DEC and a small army of volunteers try to help the vulnerable creatures navigate busy roadways en route to their breeding grounds.
(Photo courtesy NYSDEC)
Previous Next
Posted Wednesday, March 9, 2022 9:30 am

Throughout the Hudson Valley, community volunteers are getting out their flashlights, reflective vests, and rain gear in anticipation of annual amphibian breeding migrations, which typically begin in mid-March, the New York State Department of Environmental Conservation (DEC) recently announced.

Volunteers will document the migration and help salamanders and frogs as part of DEC’s Amphibian Migrations and Road Crossings Project.

“The Hudson Valley has remarkable amphibian diversity and during this time of year, road mortality poses a significant threat to the salamanders and frogs migrating from forests to vernal pools for breeding,” said DEC Commissioner Basil Seggos. “DEC is grateful to the dedicated volunteers ready to assist amphibians attempting road crossings during their annual migration. I encourage all New Yorkers and visitors traveling the state’s roads to be on the lookout for these vulnerable amphibians and the dedicated volunteers keeping them safe.”

Now in its 14th year, DEC’s Amphibian Migrations and Road Crossings Project was initiated by the Hudson River Estuary Program and Cornell University to raise awareness about critical amphibian habitat, engage volunteers to help collect data on the annual migration, and reduce amphibian road mortality. More than 800 volunteers have participated in the effort since 2009, and helped move an estimated 27,390 salamanders, frogs, and toads safely across roads.

In the coming weeks, as temperatures rise and snow melts, forest species like wood frog, spotted salamander, and Jefferson-blue spotted salamander complex will emerge from underground winter shelters and head to vernal pools for breeding. Vernal pools are small, temporary wetlands in the forest that are critical breeding habitat for these amphibians. The pools hold water until summer, so the adult amphibians must gather, breed, and deposit eggs early enough to ensure their aquatic young can hatch, grow, and leave the pools before they dry up.

Timing up to Mother Nature

The timing of migration is weather-dependent and in the Hudson Valley, with concentrated activity on the first warm, rainy nights in March, after the ground has thawed and night air temperatures remain above 40 degrees Fahrenheit. The suitability of migration conditions varies throughout the Hudson River estuary watershed, but when it’s just right, there can be explosive “big night” migrations with hundreds of amphibians on the move. On their journeys between forest habitat and breeding pools, these amphibians often need to cross roads, where mortality can be high even when traffic is low.

Project volunteers document road locations where they observe migrations in the Hudson Valley, record weather and traffic conditions, and identify and count the amphibians on the move. Volunteers also carefully help the amphibians to safely cross roads. Since the project started, volunteers have documented 20 species and counted 32,500 live amphibians, as well as nearly 14,000 migrating amphibians killed by passing vehicles. Species reported most frequently during migration nights include spotted salamander, wood frog, and spring peeper. To a lesser degree, volunteers have also observed Jefferson-blue spotted salamander complex and four-toed salamander, species of conservation concern in New York.

Safety is critical, and project volunteers are expected to take all necessary precautions. Volunteers are advised to wear reflective safety vests and headlamps to increase visibility on dark roads, and should not interfere with passing vehicles. Amphibian safety is also important, and frogs and salamanders should only be handled with care and clean hands, free of hand sanitizer, lotion, and other substances that can be toxic to amphibians’ porous skin.

For more information, including a short video about amphibian migrations, visit DEC’s website. DEC held a virtual training for volunteers in February with 105 participants. New Yorkers interested in volunteering to participate in this annual event are encouraged to watch a series of training videos on YouTube and read the volunteer handbook.

In addition, potential volunteers can access a recording of the training and use materials available on the project website to learn more, including where groups in the Hudson Valley are helping to organize local volunteers.

Anyone interested in receiving project updates and news about the migration can subscribe to the project e-newsletter through DEC Delivers.

DEC supports programs like the Amphibian Migration and Road Crossings Project to educate people about the importance of wetlands and healthy, connected forests, and encourage proactive conservation planning. These habitats are carbon storage and sequestration powerhouses, making them an invaluable tool in New York’s nation-leading fight against climate change. The program is also critical for maintaining the state’s rich diversity of plants and animals, and especially the vernal pool breeding amphibians that are of conservation concern throughout their Northeast range.

Project volunteers are encouraged to use the hashtag #amphibianmigrationhv in their photos and posts on social media.