Speedgolf is back in New York state with a two-day, 36-hole format, beginning Sunday and concluding Monday. Sunday, the participants will tee off in the first round of the Thirsty Owl New York … 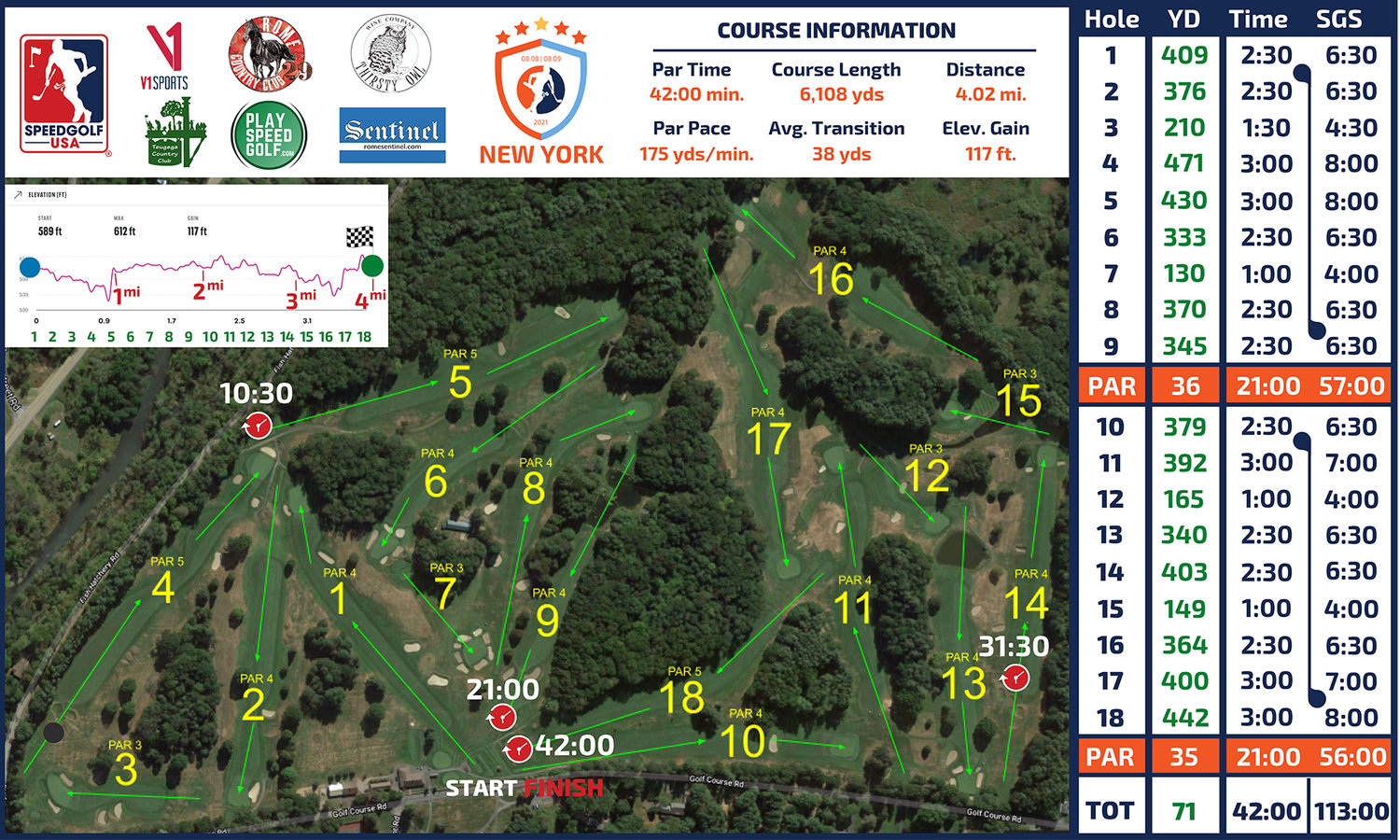 DAY ONE LAYOUT — A GPS shot of the layout of Teugega Country Club ahead of Sunday’s first round of the New York Speedgolf Open.
(GPS shot courtesy Speedgolf USA) 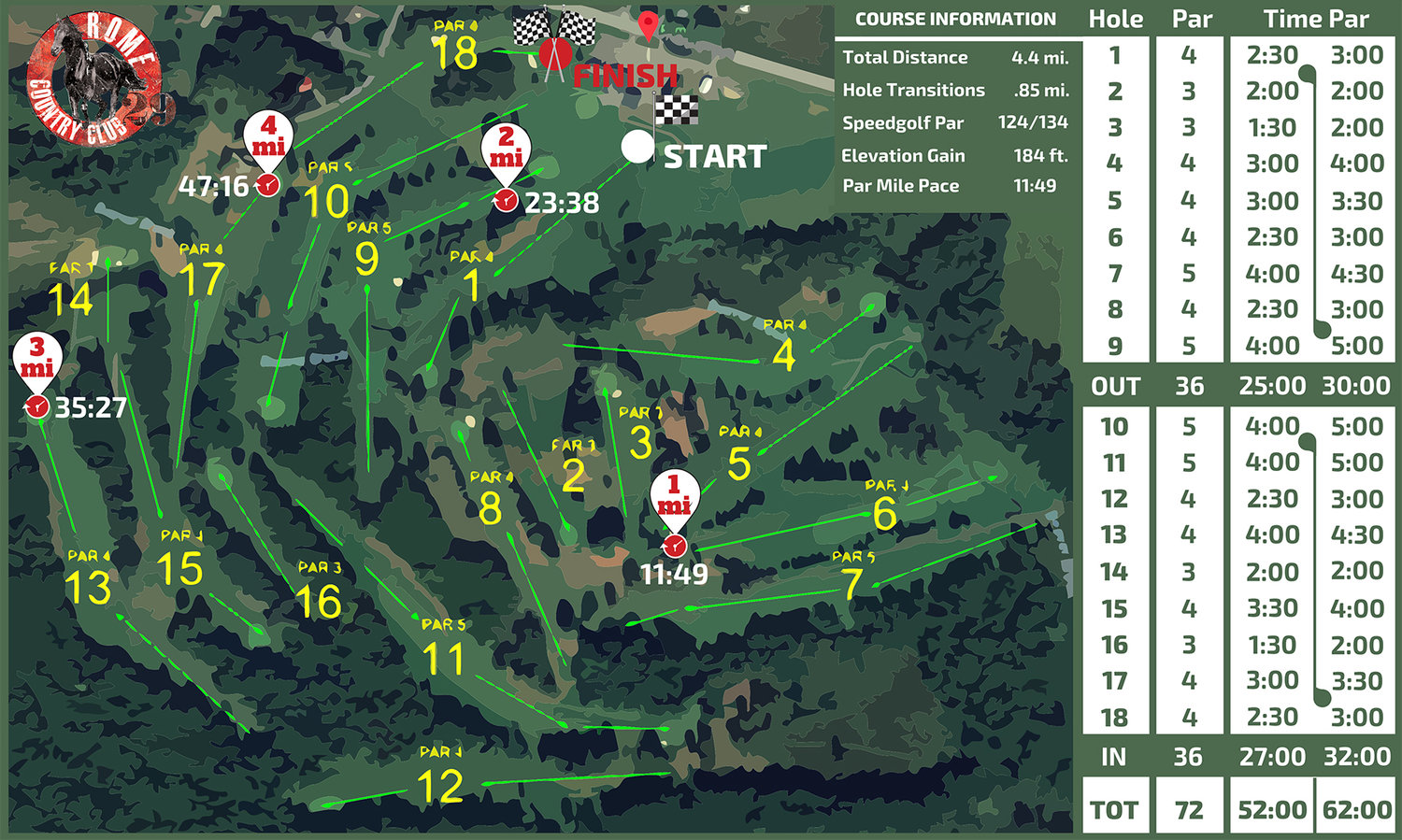 Speedgolf is back in New York state with a two-day, 36-hole format, beginning Sunday and concluding Monday.

Sunday, the participants will tee off in the first round of the Thirsty Owl New York Speedgolf Open at Teugega Country Club beginning at 4 p.m.

The second round will commence on Monday morning starting at 8 a.m. at Rome Country Club.

“Donald Ross would be rolling over in his grave if he knew people were playing his course in 45 minutes,” Teugega president Doug Bartell said with a laugh. “We’re honored to be part of this event. The way the course is laid out, it will make for an interesting tournament.”

The championship field will compete in either the Open, Amateur, Senior (55 and over) or Women’s division. The professional speedgolfers will compete for a $3,000 purse, the winner taking home $1,200.

“I think players will be out of breath by the 17th fairway,” Bartell added.

Speedgolfers tee off individually in four-minute intervals, with three to six clubs in a lightweight bag or carrying them by hand, and will play by the official rules of golf.

A Speedgolf score is calculated by adding a player’s golf strokes and elapsed round time. In 2015, Australian Mitch Williamson recorded the lowest Speedgolf round in official competition, shooting a 77 in 31 minutes and 54 seconds, for a score of 108:54.

“Teugega is challenging around the greens playing regular golf,” event host and Speedgolfer Wes Cupp said. “Adding Speedgolf to the equation will give players fits. The terrain of the course has short tee-to-green runs, but the 16th, going down the hill and then coming back up on the 17th fairway, that’s going to torture you. And then you come back for 18, trying to get a birdie chance, it’s going to make for a great finish.”

“It [Teugega] is a great course, and it will give the out of towners some variety,” Cupp said.

Lauren and Wes Cupp both shot rounds of 2-under 70 in well under an hour the last time the tournament was held at Rome County Club in 2019.

“Playing golf quickly, you’d be amazed at how well you play. I actually think I play better running with five clubs than I do in four and a half hours with all 14 clubs. It’s more natural, more instinctual, more creative, and you don’t get in your own way like you often do with [traditional] golf.”

Both courses will be set up similarly in total distance and course length. The men will play from roughly 6,100 yards, the women from 5,100 yards, and all players will traverse just over four miles from the first tee to the 18th green in their bid to go fast and shoot low.

Spectators are encouraged to attend, and scoring volunteers are needed to ride in carts and follow the Speedgolfers around the course. If interested in volunteering, send an e-mail to romecountryclub@hotmail.com.

Speedgolf USA will also make a contribution in the name of Seve Campanaro to the American Heart Association. A portion of each sponsorship goes toward the donation fund.