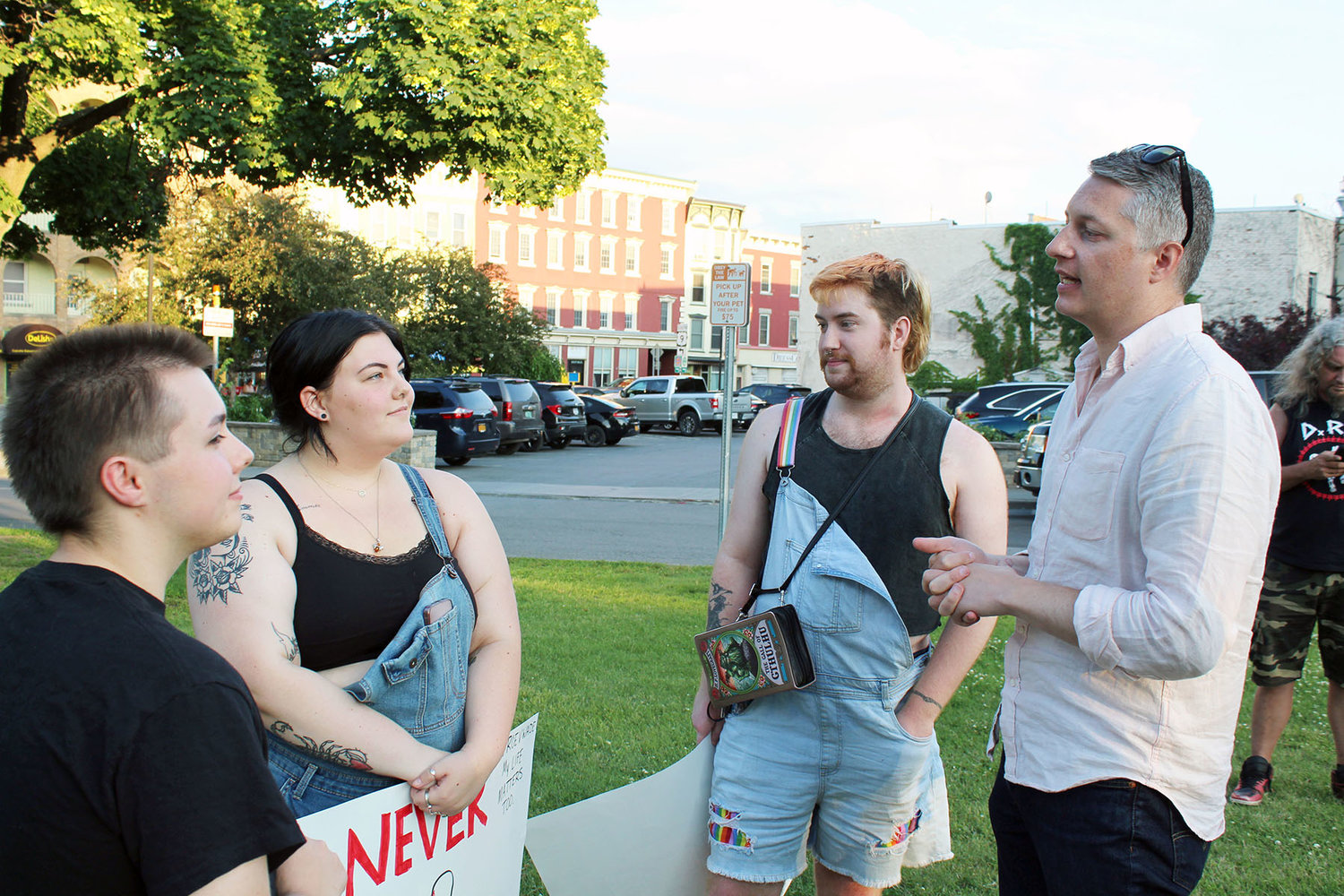 CANTON — Democrat Matt Putorti first entered the race to unseat incumbent Republican Congresswoman Elise Stefanik more than a year ago. The Whitehall native says he decided to run both out of a love of country and because he doesn’t think New York’s 21st Congressional District is getting the representation it needs.

“As the only candidate who was born and raised and grew up in this district, who voted in this district before I ran for office, I understand the people who live here and I care very deeply in a very genuine way,” Putorti says. “I’m not running for Congress as some type of vanity project. This is, for me, about protecting my home and making life better for people here.”

Putorti is one of two Democrats who remain in the race. The other is Matt Castelli, a former CIA and counterterrorism official who lives in Glens Falls.

Putorti is an attorney by trade, and he’s never held public office. But throughout his campaign, he has described himself as a service-oriented person and touted generational ties to the North Country that make him unique in this race. His parents own a grocery store in Whitehall started by his great-grandmother in 1927.

Seated at a picnic table in Macdonough Park, across from Plattsburgh City Hall, Putorti explains that he’s running on two “buckets” of issues.

In the economic bucket, he puts sustainably lowering costs amid inflation and investing in rural areas, like the North Country. The social issues bucket covers things like abortion rights, LGBTQ rights and gun control. Putorti says he supports the Second Amendment, but he’s encountered people who agree with him on an assault weapons ban.

“At the end of the day, in addition to being able to pay for the things that we need in life without bankrupting us, we also want to make sure that we can go to the grocery store without being shot,” he says.

Putorti has recently attended multiple rallies focused on social issues. Tonight, he’s in Plattsburgh for an abortion rights event, one of several he’s gone to since the Supreme Court overturned Roe v. Wade. Putorti is gay and says it’s important to show allyship to other groups whose rights are being impacted or taken away.

At the event, located in downtown Plattsburgh’s Trinity Park, Putorti speaks with several people about their frustrations with Stefanik. Debra Fox-Newman of Jay tells him the congresswoman won’t meet with her constituents.

“A group of us had an appointment, an actual appointment to meet with her,” she says. “She never showed, never called.”

Once about a couple dozen people are gathered, Putorti gives a short speech. He talks about the Supreme Court ruling on abortion rights, and urges people to mobilize and vote.

“And we need to elect people who are not Elise Stefanik, because Elise Stefanik is an anti-woman politician,” he says. “She voted against codifying Roe, she voted against the Violence Against Women Act, she voted to defund Planned Parenthood and she uses a lot of the money she raises nationally to fund other candidates running across the country who are anti-choice.”

Fox-Newman says she’ll have to check Putorti out, but likes him based on what she’s seen. Still, she didn’t know anyone, Putorti or Castelli, was running against Stefanik until this evening.

Matthew Grajek and Cheyanne Garza came to the abortion rights event from Copenhagen, about three hours away. They’re registered Democrats who have already been mulling over who they want to support against Stefanik.

Grajek says it’s been hard to tell where Putorti and Castelli stand based on their campaign websites.

“I believe it’s Matt Castelli who seemed very aggressive in his marketing, which on one hand could very much appeal to the same crowd that Elise Stefanik appeals to, right?” But he says Putorti seems more soft-spoken and genuine.

The primary election between Putorti and Castelli is set for Aug. 23, with early voting beginning on Aug. 13. Putorti says he has committed from the beginning to supporting whoever emerges as the nominee.

“My goal in all of this is to have this district represented by somebody who is not Elise Stefanik,” he said. “I’m confident that we are going to prevail in the primary, but if we don’t, I will certainly support whoever the nominee is because that is the right thing to do and we need to be unified in that effort to defeat her.”

Castelli has outpaced Putorti in fundraising, and he’s set to end up on the November ballot no matter how the Democratic primary goes. That’s because he’s secured the independent Moderate Party line.

Additionally, Castelli has been endorsed by almost every county Democratic committee in the district and Stefanik’s predecessor, Bill Owens. But even if Putorti pulls off an upset against Castelli, the general election is shaping up to be an even bigger battle.

Congresswoman Stefanik has millions of dollars and name recognition as the incumbent and a member of House leadership.

“I’m not afraid to take on a tough fight,” he says. “I was a litigator, I’ve taken on tough fights my entire life. And I’m not stopping now. So I think all of these things make us the best campaign to take on and defeat Elise Stefanik and bring honorable representation back to this district.”