Three beds complete with mattresses, hand-built frames, and bedding were recently donated and delivered to three children in Oneida as part of the efforts of Sleep in Heavenly Peace. 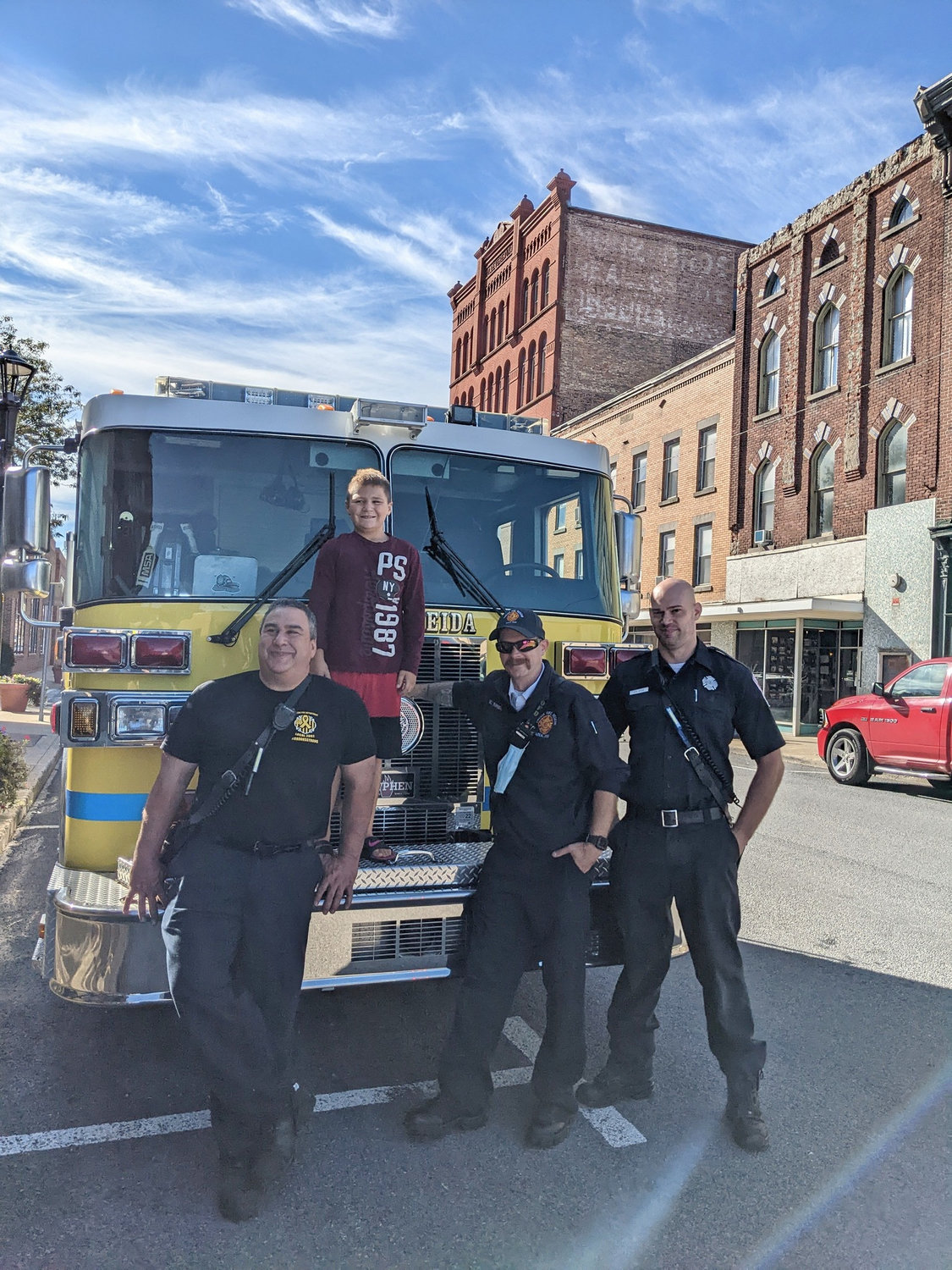 Eight-year-old Dominic Diaz was happy to pose for a photo with members of the Oneida Fire Department who helped deliver a brand new bed for him that was built and donated by Sleep in Heavenly Peace’s Syracuse chapter.
(Photo submitted)
Posted Tuesday, October 4, 2022 1:40 pm
Carly Stone
Staff writer
email / twitter

ONEIDA — Three beds complete with mattresses, hand-built frames, and bedding were recently donated and delivered to three children in Oneida as part of the efforts of the Sleep in Heavenly Peace, Syracuse chapter.

More than 60 beds have been dropped off to children in need in Oneida and the greater area since the volunteer organization started serving this area nearly three years ago, said Sleep in Heavenly Peace Syracuse Chapter Co-President Jon Wright. Qualifying children must be ages 3-17 to receive a bed and demonstrate some sort of need, which can take on many forms — examples include multiple children sleeping in one bed, children sleeping with parents, sleeping on a couch, or having no bed at all.

Overall the Syracuse chapter has delivered over 2,700 beds and counting since their first delivery on October 6, 2018. The group serves areas in Syracuse, Oneida, and Oswego.

Mother Haylee Diaz, living in Oneida, wanted to surprise her three children with brand new beds to call their own. Since moving recently to be closer with family, her children ages three, eight, and nine were sleeping on air mattresses. “I’m currently out of work. So I, in all honesty, could not really afford any beds at the moment,” she explained. She also recently had a baby.

She applied for the beds around two months ago, a process she said was quick and easy. When the time finally came for the beds to arrive on September 24, the three units were hauled up to Diaz’s third story apartment with the help of the Oneida Fire Department (OFD).

“I’m 65. I’m in decent shape …but I looked at those stairs and went, thank goodness for those guys being available,” Wright said.

“[My kids] absolutely love them,” Diaz said of the beds. “They sleep in them every night. And they were super excited that they got brand new bedding.”

To Wright, kids having their own beds is about a lot more than sleep. “Some of the main things that I see in response to a kid getting a bed is, it’s kind of sometimes the first place they actually can control. I say occasionally, ‘it’s the first piece of real estate that they own,’ and in many ways it is. It’s the first place where, ‘it’s mine.’”

For parents, it can offer peace of mind. “It was a super huge relief financially for me,” Diaz shared.

The Syracuse chapter generally has around 200 bed requests in their queue, waiting to be built and dropped off, Wright said. Six more beds were delivered in Oneida soon after this delivery. The OFD assisted with four of them, according to Wright.

Anyone interested in applying for a bed through Sleep in Heavenly Peace can do so via their website, shpbeds.org. There are chapters in both the Syracuse and Utica areas. The organization is always seeking volunteers, Wright said.