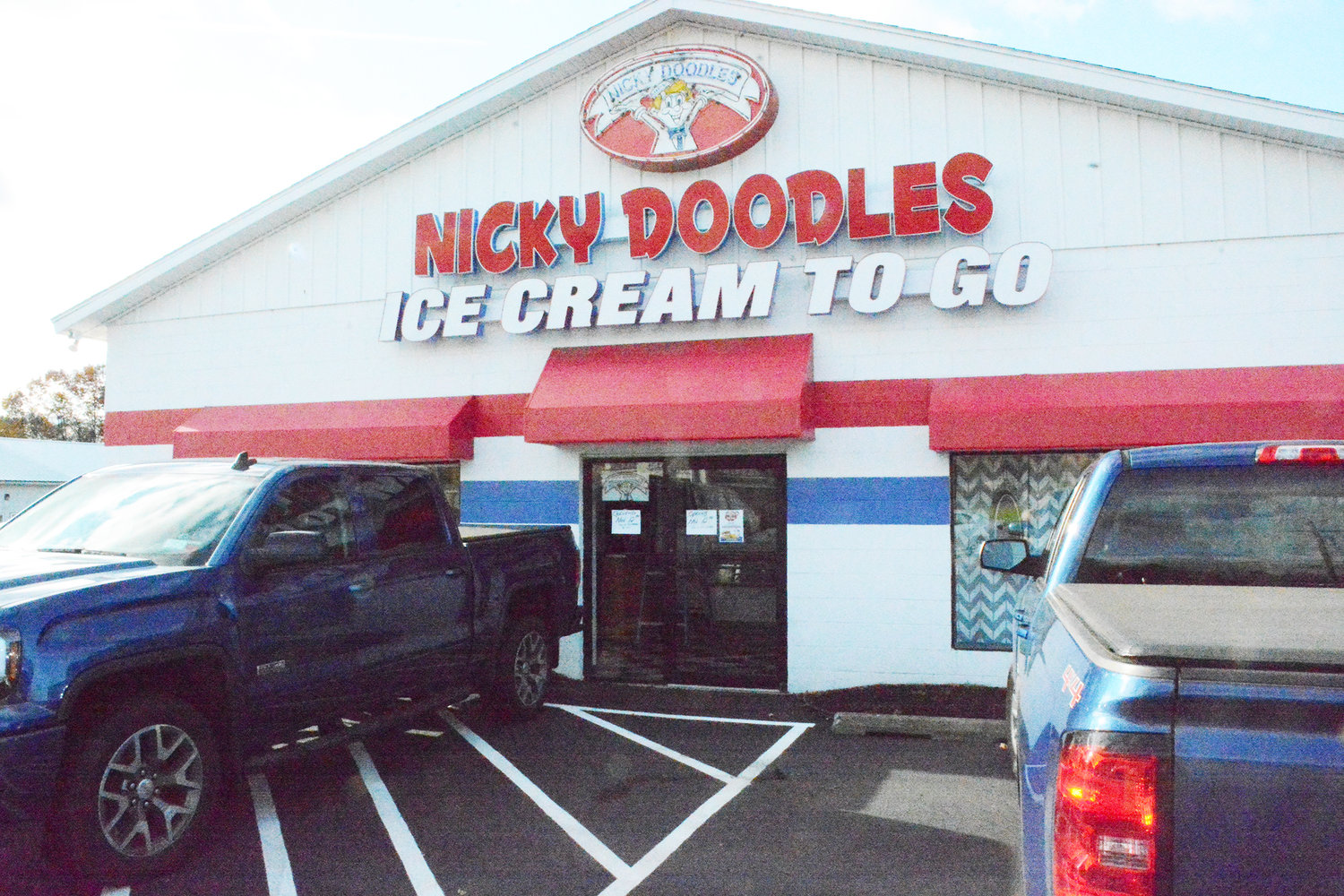 WINTER EATS — Nicky Doodles has been serving ice cream year round since 2017. But this year they’re bringing their food menu to the “TO GO” store conveniently located next to the eat-in restaurant at 1165 Erie Blvd. in Rome. Doors open Nov. 12 at 11 a.m. Owner Tim Twomey wants to remind folks this is a TO GO operation, no dining in. Also, since they make everything fresh, please order ahead by phone or online. You can come inside when picking up, but he suggests using the new drive-up window on the right hand side of the building.
(Sentinel photo by Thomas M. Baker) 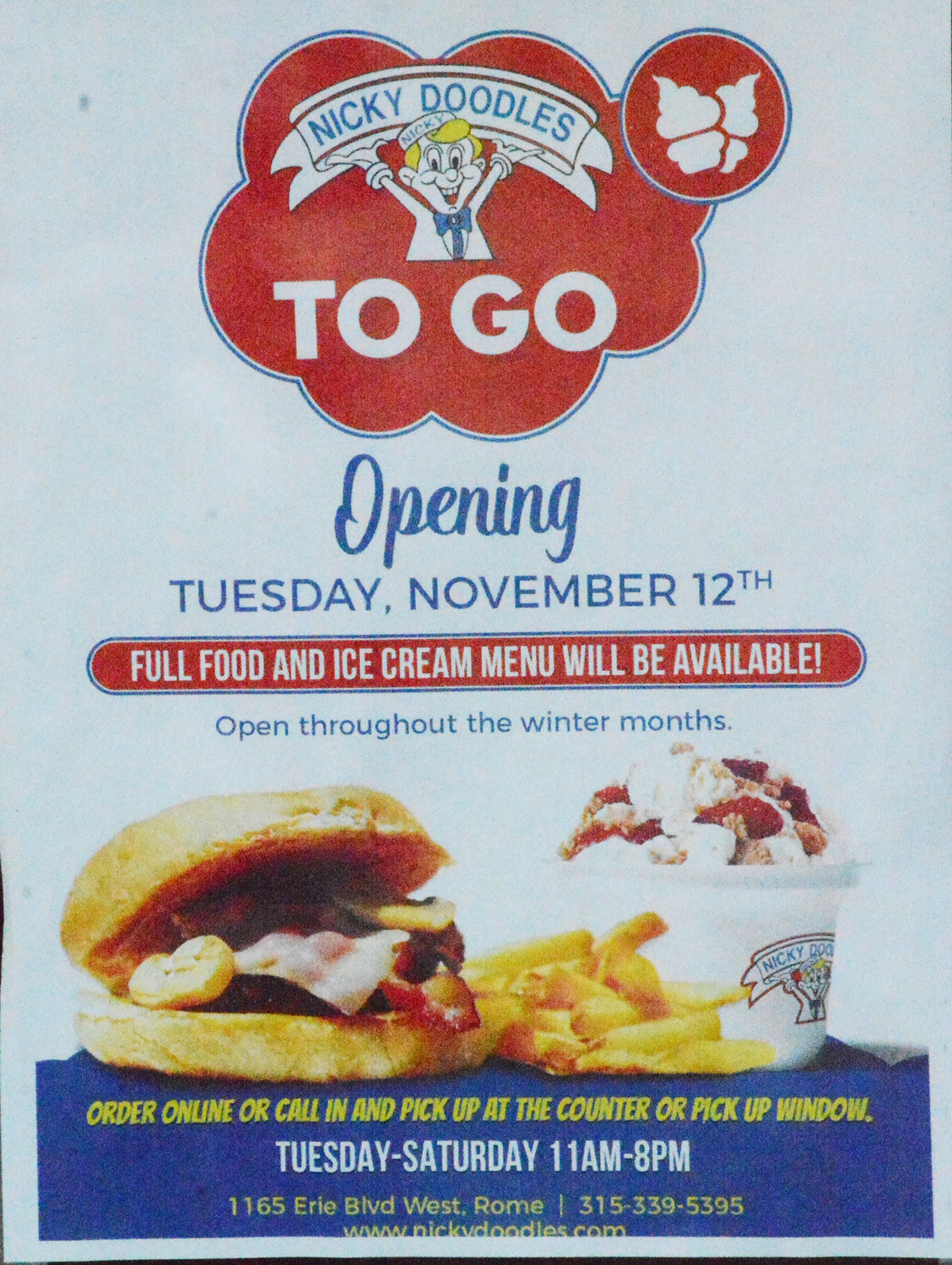 SOMETHING NEW — Typically Nicky Doodles closes in October and re-opens in March. But this year they are opening this new site, where an old wallpaper store once sat, right next to their flagship store on Erie Blvd. Tim Twomey said he want s see how this store does over the winter and if all goes well, maybe year round can be something his other locations can undertake.
(Sentinel photo by Thomas M. Baker)
Previous Next
Posted Sunday, November 3, 2019 9:01 am
Thomas M. Baker
Staff writer
email

Nicky Doodles on Erie Boulevard will be serving their full food and ice cream menu at their Nicky Doodles TO GO store beginning Tuesday, Nov. 12.

Tim Twomey, owner/operator of the local eatery and ice cream store for the past 21 years, along with his two sons, Tim and Nicholas, his daughter, Ashley Andrews and her brother-in-law Joe Wikinski, typically close between October and March. He said the family-run business decided to give the food menu a chance to keep the people of Rome happy all year long after getting multiple comments from customers about how they and their food, were going to be missed until spring.

The family owns three stores, Rome, Verona and a franchise in New Hartford. And now, Nicky Doodles TO GO.

“Two years ago we started doing ice cream to go,” said Twomey, while painting the exterior of his Rome location. “And that seemed to catch on over the winter. So this year we made the decision to try food all year long to see how that goes.”

Twomey said not only will they be open all winter, but for extra added convenience, customers won’t need to get out of their vehicles to get their order due to the new pick-up window they’ve installed. Along with that new pick-up window, Nicky Doodles is going high-tech. In addition to walking in and ordering, or calling ahead, customers can now order online at www.nickydoodles.com and pick-up at the drive-thru window. But you do have to order ahead, it’s not going to be like a regular drive-thru where you get the food right away.

“We cook everything to order, everything is fresh, so you have to call ahead and then pick it up,” Twomey explained.

Twomey said recently they started taking online orders in their other stores and it showed great promise.

“I just think people like that convenience,” he said.

Twomey, a former management employee with Coca-Cola said he his career with the soft-drink company came to a end about 25 years ago. He tried a few independent businesses for a few years, and then began the ice cream food restaurants. When it came time to name the restaurant, he and his family where baffled. Until their son, Nicholas, who they affectionately referred to as “Nicky-Doodles” gave them the name they were searching for.

Nicholas now runs the Rome location and is as excited about this new year-round venture maybe even more so than his dad.

“We got a lot of feedback from our customers,” the younger Twomey said. “ And they loved what we did with the ice cream, going year-round in 2017, over the winter. A lot of them had birthdays that time of year and wanted things like ice cream cakes and we also had a lot of interest over the food.”

He said he and his dad put the kitchen in last Fall, honestly, they thought about expanding winter hours then...but realized they weren’t quite ready...however, his year it’s a go.

“A lot of people told us when they came in (Rome location) they’d love if we were open year round,” the young Twomey said. “ I just want to give the people of Rome what they want. Now that we are doing it, I’m getting a lot of positive feedback.

He said they put the flyer out last week and so far the customer reaction has only been upbeat.

“We’re going to see how it goes this year,” Twomey said. “if it does ok, we might add yearly service to the other stores, but for right now we’re curious to see how this location does before making any further future decisions.”

“Hopefully, we’ll do alright,’’ the company’s namesake said. “ A lot of the customers that came into the store this Fall were bummed out they’d have to go all winter without our food, so we just sort of saw the need and are looking to fill in. We want to do it for our customers and all that takes is hard work. My family doesn’t mind that at all.”