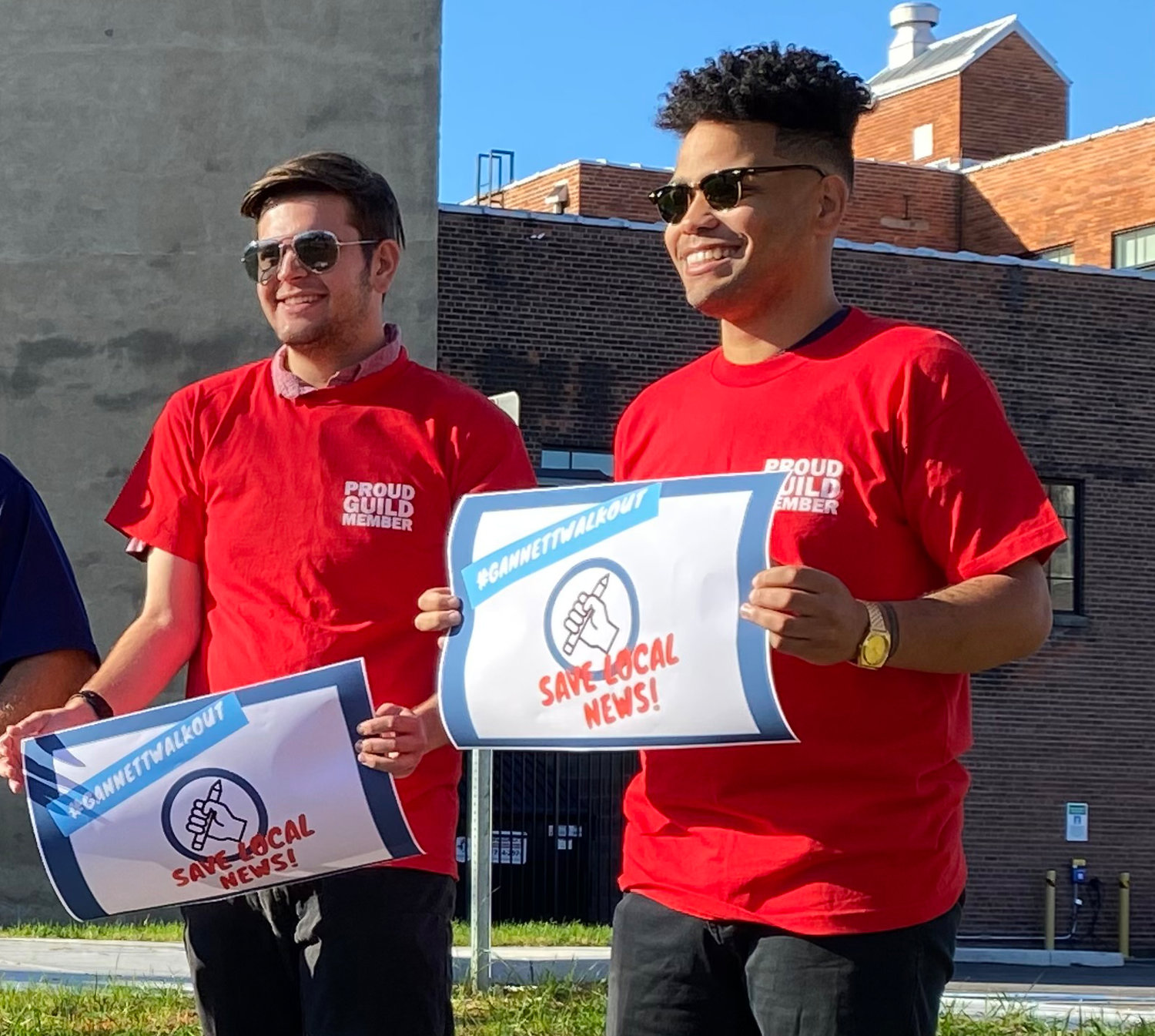 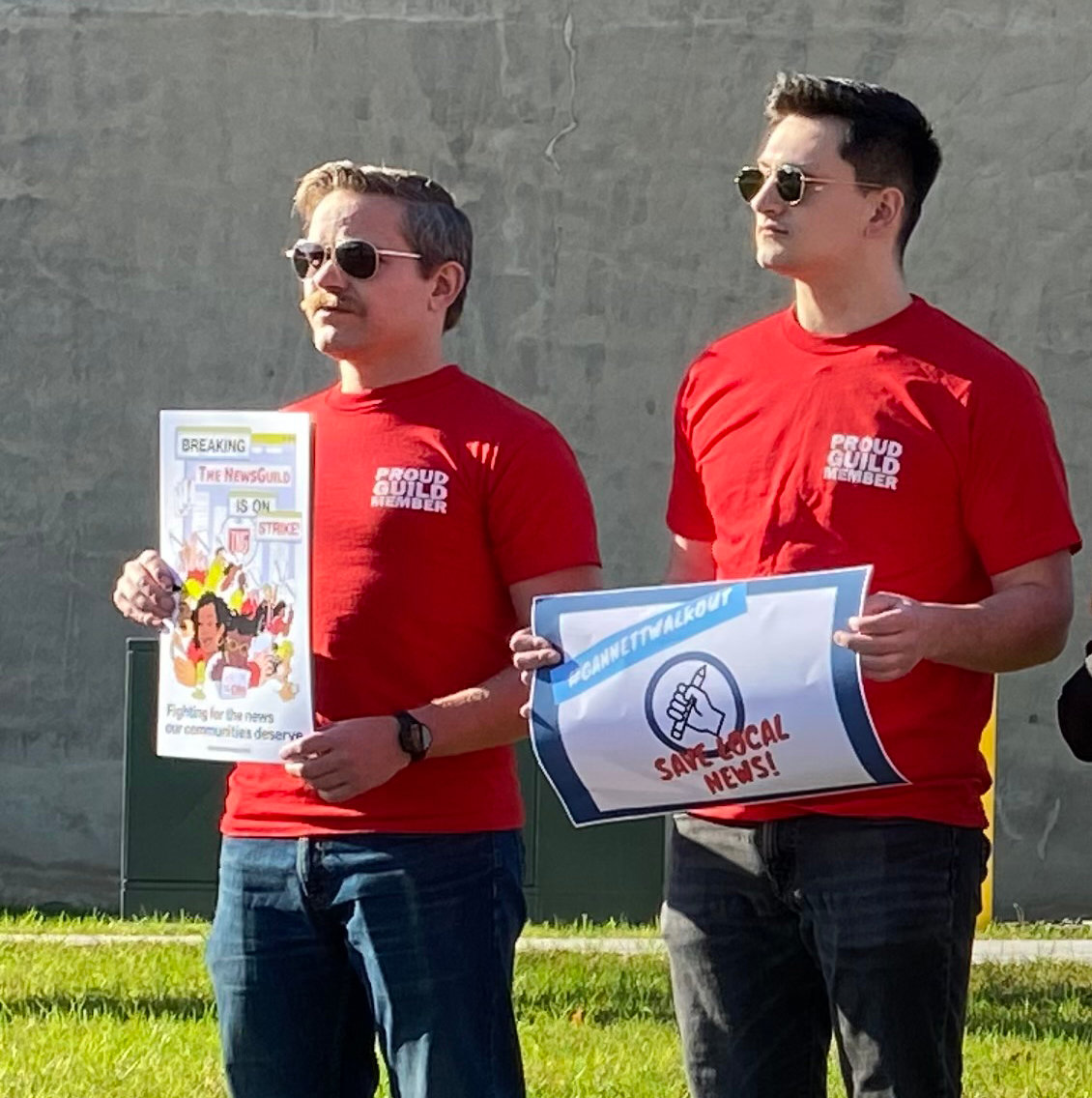 UTICA — On Friday, staff at the Utica Observer-Dispatch and Herkimer Times Telegram rallied outside the Observer-Dispatch office at 70 Genesee St. in protest of the, “papers’ parent company Gannett and its latest draconian, cost-cutting measures,” confirmed a spokeswoman for the Utica News Guild, which represents journalists, photographers and other staff at both papers.

The local journalists joined over half a dozen other shops at Gannett-owned papers in the United States on Friday, all who walked out of work for the day. Other units at Gannett-owned papers participating included the Utica Guild’s sibling shops at the Gannett Regional Union — a group of six Atlantic region shops under the NewsGuild of New York that include the Hudson Valley News Guild, the Newspaper Guild of Rochester, APP-MCJ Guild, the Atlantic DOT Guild and The Record Guild — as well as shops in the Media Guild of the West including the Desert Sun News Guild and Arizona Republic Guild.

“Our members are walking out today because Gannett has left us with no choice,” Utica News Guild unit chair H. Rose Schneider said in a statement.

Schneider is the crime, breaking and trending news reporter at the OD. She added, “From layoffs this summer to positions ranging from sports reporter to editor left vacant, the company has shown apathy if not downright callousness toward its employees and the communities it is meant to serve.”

The Utica News Guild, a unit under the NewsGuild of New York local, has been bargaining for a new contract between the Observer-Dispatch and Gannett since the start of 2022, with hopes for higher wages, better benefits and layoff protections, and improvements to newsroom diversity, Schneider said.

Schneider confirmed Gannett recently announced it would impose furloughs on non-union staff, as well as freeze hiring, and said an independent study was conducted that revealed pay gaps in diversity and gender at Gannett’s Atlantic region papers.

“(Gannett) needs to step it up in bargaining to meet us with a fair offer,” she said, adding the median yearly pay is currently around $40,000 for newsroom staff, who are currently working without a local editor.

On Friday, Schneider confirmed seven out of 10 people in the OD’s newsroom were participating in the walkout. Instead of publishing sports and breaking news on the Observer-Dispatch’s website, members launched an alternate site to post information.

“Local news is important,” he said, adding it is the goal to preserve the OD for years to come.

In a Friday statement, a Gannett spokesperson stated, “Our goal is to preserve journalism and serve our communities across the country. Despite the anticipated work stoppage in some of our markets, we will not cease delivering trusted news to our loyal readers. In addition, we continue to bargain in good faith to finalize contracts that provide equitable wages and benefits for our valued employees.”