New to the Utica Comets, Pinho off to a good start

It is a new start for Brian Pinho in a few ways. The 27-year-old right winger just completed his first full month with the Utica Comets after joining the New Jersey Devils in the offseason.

New to the Utica Comets, Pinho off to a good start 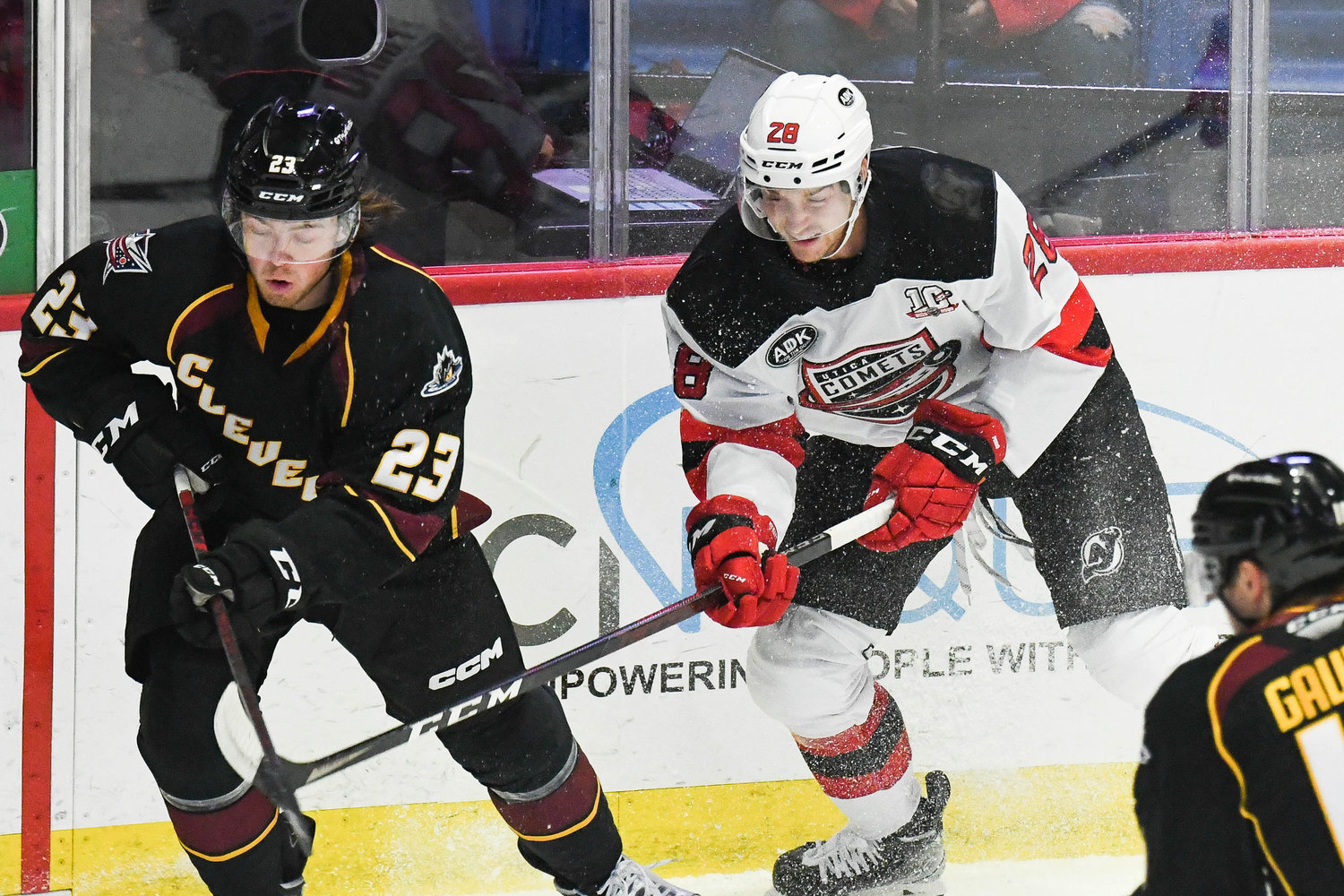 Utica Comets forward Brian Pinho, right, fights for the puck along the boards with Cleveland’s Jake Christiansen (23) during the game on Friday night at the Adirondack Bank Center at the Utica Memorial Auditorium. Pinho has been a key player for the Comets after joining the New Jersey Devils organization in the offseason.
(Sentinel file photo by Alex Cooper)
Posted Wednesday, November 2, 2022 7:30 am
Ben Birnell
Sports writer
email / twitter

UTICA — It is a new start for Brian Pinho in a few ways.

The 27-year-old right winger just completed his first full month with the Utica Comets after joining the New Jersey Devils in the offseason.

“This is my first time being away from (the Washington Capitals organization), so I was a little nervous,” said Pinho, who appeared in 172 games over the last four seasons with the Hershey Bears, though he was limited by a few injuries during his career. “But, it has been great. I’m really enjoying it here.”

Pinho, who is a Massachusetts native, said it has been an easy transition with his new team.

“Everyone has been so welcoming,” Pinho said. “The coaches are so great here. They like to have us play a certain way and they’re really good at coaching us the right way and making sure we play together as a team. That’s always important. I think a lot of guys are receptive to that, too.”

Pinho missed the end of the 2021-22 season after shoulder surgery in March. He said his shoulder feels good after it had been bothering him “for a long time.”

“Last year it was a mess and I couldn’t play with it,” said Pinho, noting it was the longest he’s been out of the lineup during his pro career. “Sitting out last year and watching my teammates play, I hate that. I hate not being able to play.”

The Comets are hoping Pinho, a hard-working, skilled forward who scored 20 goals in the COVID-19-altered 2019-20 season, can be a key cog in the offense. The team is looking to replace its top-four scorers from last season.

“I think Brian is a guy who has shown a high level of hockey IQ,” Comets coach Kevin Dineen said. “He’s coming off an injury that took him out for a significant amount of time. I think he’s doing a good job of stepping in and playing some real quality minutes on both sides of special teams. He’s had some major responsibility playing against other teams top lines as well.”

Pinho has slotted into a top-6 role and getting time on special teams. Factoring in the suspended home-opening game against Wilkes-Barre/Scranton on Oct. 17, Pinho – who scored the Comets’ first goal of the season – has a point in all but Saturday’s one-goal setback to Toronto. Among active Comets players, Pinho’s five points lead the team.

Pinho and the Comets (2-3-0-0, 7th place in the North Division) face a busy week with their first three-games-in-four-days stretch. The team closes a three-game homestand against the Providence Bruins (5-1-1-1) at 7 p.m. Wednesday. A home-and-home series against North Division foe Rochester follows this weekend. The teams play Friday at Rochester and Saturday in Utica. Both games are set for 7 p.m. starts.

“The team is great. It is a really good group of guys,” Pinho said. “I’ve really enjoyed the first month here. I think we’re really starting to come into our own here. We have a really deep, young team and a lot of speed. We have good camaraderie.”

Pinho was a standout for four seasons at Providence College. It helps there’s a connection with fellow former Providence College players in Jack Dugan – another addition by New Jersey in the offseason – as well as Devils prospect Tyce Thompson. Notably, New Jersey General Manager Tom Fitzgerald also played for Providence in the 1980s.

And, while Dugan and Thompson both joined the program the season after he graduated in 2018, that connection is helpful with his new team.

“They were kind of the first guys that I met in New Jersey. It has been cool meeting them and fun sharing some stories from Providence and their time there,” Pinho said. “They’re great guys and so is everyone on this team.”

Forward Sam Laberge missed Saturday’s game due to illness when the team played with 11 forwards. He practiced Tuesday in a normal capacity.

Forward Joe Gambardella (upper body) remains out for a few weeks. He has missed the last four games.

With Stevens and Laberge, the team would have 13 forwards available.

Defenseman Nikita Okhotiuk (upper body) practiced in a no-contact jersey after missing the last four games and recently skating on his own. Dineen said Okhotiuk is in the day-to-day range, but likely wouldn’t be in the lineup vs. Providence.

The team had 16 man-games lost to injury in October.