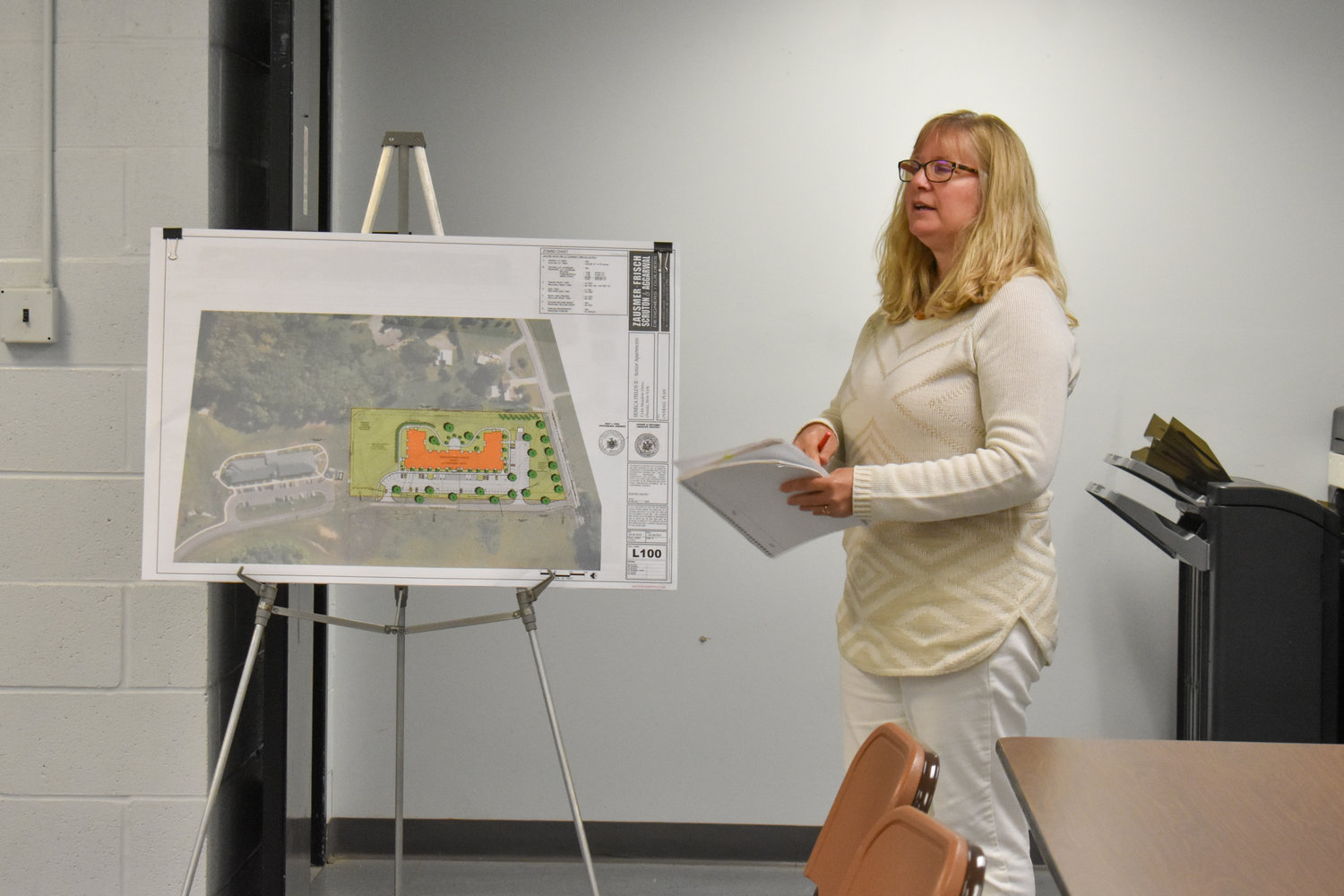 Two Plus Four Companies is proposing to develop a 51-unit senior apartment complex on Fairview Avenue in Oneida. Above, a site plan consultant presents to the Oneida Planning Commission/Zoning Board of Appeals earlier this month.
(Sentinel photo by Carly Stone)
Posted Saturday, November 26, 2022 9:50 am
Carly Stone
Staff writer
email / twitter

ONEIDA — A developer is looking at Oneida as the location for new senior apartments.

This senior housing project was first officially presented to the city back in September, and there were also pre-application meetings prior to that in the spring and summer, explained Oneida Planning Director Chris Henry.

During a public hearing at Oneida City Hall on Monday, Nov. 7, consultant Lisa Wennberg of Keplinger Freeman Associates landscape architecture firm presented to the Plan Commission/Zoning Board of Appeals (PCZBA) in Two Plus Four’s pursuit of the required approvals needed to submit a project funding application to NYS Homes and Community Renewal, Henry explained.

“The planning board acted on the conditional use permit and site plan review approvals. They approved both, but the site plan had a list of conditions that they must meet to complete and satisfy the building permit when they go for one,” he explained. These conditions regarded stormwater management, landscaping, and others.

Sources said project parties are still waiting for state/federal funding approval, and confirmation of its approval may not be received until spring of 2023. If approved, construction would begin at the end of 2023 or beginning of 2024.

Qualifications to live in most of the units would include being age 55 or older and meeting the maximum and minimum income guidelines for the apartments, a Two Plus Four representative reported.

According to Two Plus Four, there will be 10 apartments set aside for the “frail elderly” (elderly people who can not perform any one ADL, or Activities of Daily Living), which will have separate requirements and be overseen by Oneida Health Rehabilitation and Extended Care.

These units will be for Oneida Health Rehabilitation and Extended Care residents who need a safe environment to be discharged to where they can receive supportive services from a care manager and support staff to remain in an independent setting, according to Oneida Health’s Director of Marketing and Public Relations Kevin Prosser.

Two Plus Four said these services through Oneida Health Rehabilitation and Extended Care will be provided through a pending Empire State Supportive Housing Initiative award.

The residential qualifications for the apartments managed by Oneida Health Rehabilitation and Extended Care include being on Medicaid, over 55, and considered homeless. “This can include individuals who experience an extended stay at a nursing home who lose their home/apartment during that period,” Prosser explained.

Similarly, Seneca Fields Apartments on Meadows Drive also has 10 separate “supportive service” units managed by Oneida Health Rehabilitation and Extended Care, according to its website and officials. The services provided in the new apartments will mirror the ones currently offered here, Prosser said.

Residents who do not reside in these specialized support-service units could still potentially receive services from home care agencies if needed, but it would be done independently, Prosser explained.