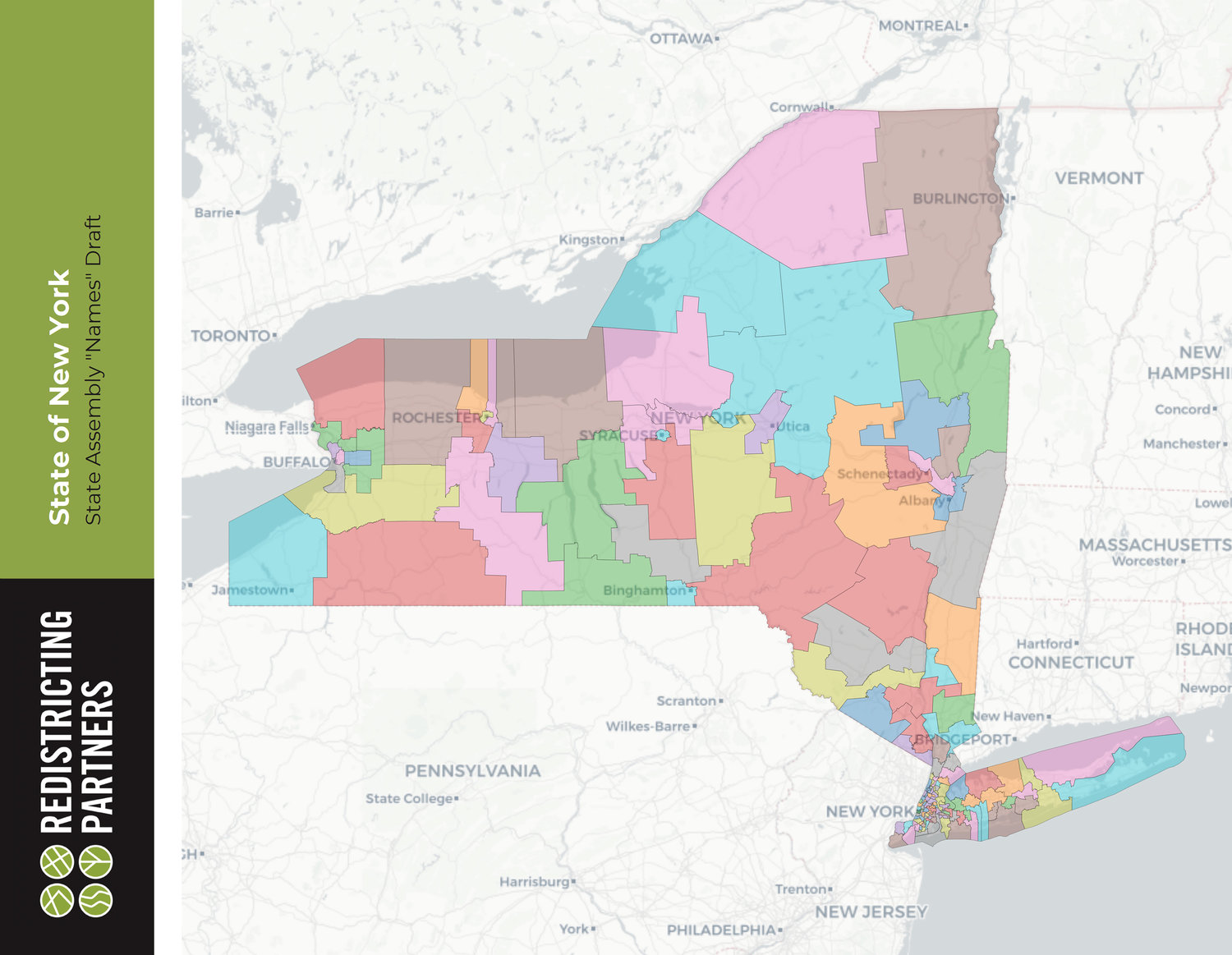 Republicans and Democrats on an independent commission tasked with drawing new political maps instead drew criticism Wednesday when they failed to agree on what they should look like and released competing versions.

The state’s loss of a congressional seat based on the most recent census date — from 27 to 26 — means a district will disappear. Under both Republican and Democratic maps, the vanishing district comes at the expense of upstate, which currently has 12 seats but will now have 11 under redrawn maps, if adopted.

The public will have the opportunity to weigh in on hearings in the coming months. Locally, officials are mixed on the process and the new lines so far.

“In 2014, New Yorkers across the state voted overwhelmingly to end partisan gerrymandering and supported an independent, nonpartisan commission to draw fair district lines. It’s clear Democrats in Albany and Washington are trying to undermine this process at every turn. New York Democrats need to follow the law, respect our state’s Constitution, and honor the will of New Yorkers,” said Congresswoman Claudia Tenney, R-22, New Hartford, in a statement.

“The preliminary drawings of potential legislative and congressional districts, which look like a child’s coloring book, make it difficult to discern or determine district boundaries,” said state Sen. Joseph A. Griffo, R-47, Rome. “However, it is important to remember that this is only the beginning of the redistricting process, which I believe should be nonpartisan, and that the recently proposed district lines will likely change. I encourage New Yorkers to participate in upcoming public comment periods regarding this issue.”

“The draft maps were released Wednesday and there is much more work that needs to be done before they are final. The 10-member bipartisan commission will continue to have hearings across the state to gain input from all New Yorkers about the draft plans. The detailed figures were not received until this month and then the new bi-partisan redistricting commission could not reach an agreement and two plans were put forward. I had concerns regarding this process when it was first introduced, unfortunately my concerns have become a reality…,” said Assemblywoman Marianne Buttenschon, D-119, Marcy, in a statement.

The release of competing maps by the Independent Redistricting Commission means that the bulk of the work on redrawing the state’s congressional map may fall later this year entirely to the Legislature, which is controlled by Democrats.

“This lets us know of the divisions among commission members and the inability to agree on one map, which makes their task more difficult and challenging as we approach the end of the year when either an agreed-to map or the maps with the most votes are sent to the Legislature,” said Jeffrey M. Wice, a New York Law School professor and an expert in census law and redistricting.

Seven out of 10 commissioners must agree on a map. The commission didn’t vote on the separate proposals Wednesday. “If they divided 5-5, then conceivably two similar maps would be sent to the Legislature by the end of year,” Wice said.

In general, the final version of any political map doesn’t mirror the original proposal.

But Democratic State Party Chair Jay Jacobs said that Wednesday’s development suggests the Legislature will likely have to “start over” when redrawing the new maps.

And he said New York must act soon as 2022 candidates face deadlines to gather signatures.

New York is one of at least five states — along with Colorado, Michigan, Utah and Virginia — that have added nonpartisan redistricting commissions in the past decade in hopes of redrawing maps free of political influence and contorted gerrymanders.

But the competing maps released Wednesday drew immediate criticism from some quarters.

“It’s clear that these are partisan maps, and that they should drop the word independent from the name Independent Redistricting Commission,” said Blair Horner, the executive director of the New York Public Interest Research Group.

The commission’s initial draft underscores the challenges that lie ahead, one observer noted.

“It’s unfortunate, because it doesn’t bode well for the commission acting independently to come up with district proposals that reflect communities and local stakeholders — rather than political interests,” said Steven Romalewski, the director of CUNY Mapping Service at the Center for Urban Research.

Republicans blasted the Legislature this year for placing on this November’s ballot a measure that would make it easier to override the commission’s nonpartisan maps, requiring only a simple majority vote.

“The fact we can’t have any sort of discussions or compromise that lead to a final work product shows that Democrats in the state are trying to create a political sham and lead this to an ineffective commission that they can co-opt through the Legislature,” Langworthy said.

Jacobs said he also feels disappointed by the commission’s failure to agree on a single map.

But he said the courts offer protections over unfair maps. New York lawmakers couldn’t agree on a congressional redistricting plan following the 2010 census, when New York lost two congressional seats and Republicans controlled the state Senate. A federal magistrate judge ended up tasked with drawing up the map.

And Jacobs said he hopes Congress will pass legislation to prevent gerrymandering across the board.

Jacobs said Democrats — who have the voter registration edge, wield a powerful supermajority in both chambers of the Legislature and control 19 of the state’s 27 seats in Congress — should undo previous Republican efforts to draw “very unfavorable lines for Democrats” in New York.

“So if we undo half of that, they’re going to see a change not to their benefit as a result,” Jacobs said.

Langworthy scoffed at the idea that New York’s current maps are unfair to Democrats, who have won in swing districts.

“The situation here is they would like to make permanent supermajorities,” he said. “They don’t want seats in question, they want seats that are guaranteed for them.”