Sean Barton is a well-recognized member of the Canastota community, having served the Police Department for 20 years. 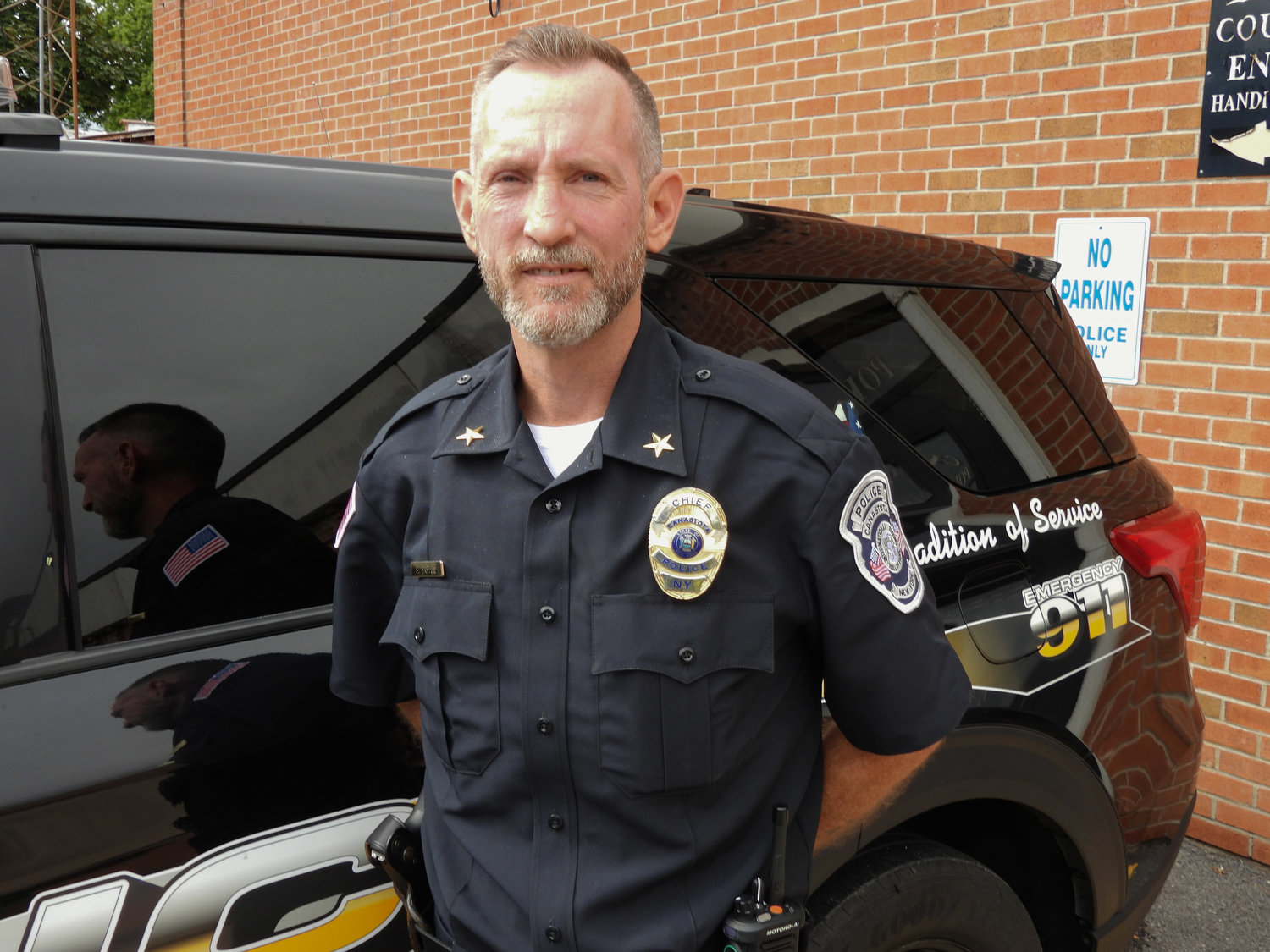 Canastota Police Chief Sean Barton believes in a community-involved police force and a larger focus on children’s focus and well-being. The chief was officially appointed on Aug. 16 and has served as officer-in-charge since July 2021.
(Sentinel Photo by Charles Pritchard)
Posted Thursday, September 8, 2022 2:00 pm
More information

CANASTOTA — Sean Barton is a well-recognized member of the Canastota community, having served the Police Department for 20 years, and as police chief, he hopes to get the department more involved in the community than ever.

When asked why he applied to Canastota first, Barton stated that he liked the town and knew his daughter’s grandfather lived nearby. Before that, Barton grew up in Minoa.

In 2014, Barton was promoted to road patrol sergeant.

Longtime Police Chief James Zophy retired last year, and since July 2021, Barton has served the village as officer-in-charge. Zophy had served Canastota for around 28 years, so filling those shoes wouldn’t be easy.

When asked how he felt taking the position of officer-in-charge, Barton said it was a little overwhelming “... as any new challenge.”

But he set his own goals and worked to make those a reality.

“I wanted the department to participate in more community service and get our officers involved in events,” Barton said. “We had officers at this year’s fishing tournament and others so that they could get to know the children, and the children get to know them.”

“Sean has been with us so long, I don’t think there are a lot of people who don’t know him,” Warner said.

Part of that reputation comes from Barton’s work as a school resource officer and his ability to connect with students. “He’s connected with children, and now those children have grown up and have children of their own,” Warner said. “As OIC, he had officers going to more events and going to the schools.”

More than anything, Barton believes in putting the well-being, safety, and future of the area’s children at the top of his list.

On May 24, the day of the Uvalde shooting, Canastota Administrator Jeremy Ryan said Barton took the lead and met with the Canastota School District to ensure safety plans were up to standard and enough personnel were available to patrol the school grounds.

Barton believes the best way to deal with crime on the streets is to head it off before it gets there — and that starts with the children. And for parents, Barton said the Canastota Police Department would like to work with them to help, whether by finding the resources they need or otherwise.

“The problems going on at schools carry on into the streets,” he said. “If we can resolve the issues going on at school, I think we can stop them from getting into the streets. And it lets the officer sit down, talk with these children, communicate with them and their parents, and resolve the issues these children are having — sooner rather than later.”

He still thinks it’s funny when he was asked to be a school resource officer, and Barton will make jokes about it.

“I wasn’t the greatest student in high school, [so when I was asked] I said, ‘Did you even see my background during school?’” he said with a laugh. “But if anything, it helped me better understand where children were and how to teach them in my own way. I was a lazy kid, and I tried to teach them how important a high school education is and carried that on through the years.”

“And now, I tell children how hard I had to work to get where I am now as opposed to (the alternative),” Barton said. “

When asked what goals he had as police chief, Barton said he’d like to see more officers available for the village, especially an additional school resource officer.

“Anything to help reach out to the children and make the school safer,” he said.

Those who want to help Barton and the Canastota Police Department are encouraged to speak up and contact the department.

“If you see something, say something,” Barton said.

In particular, Ryan said the Canastota Police Department had used doorbell cameras used by residents and businesses to solve multiple crimes based on surveillance video.