The Rome Free Academy hockey team won 5-2 over Ithaca in their home debut Friday night at Kennedy Arena. Co-captains Kyle Lubey and Griffin Eychner each scored once and added three assists as the … 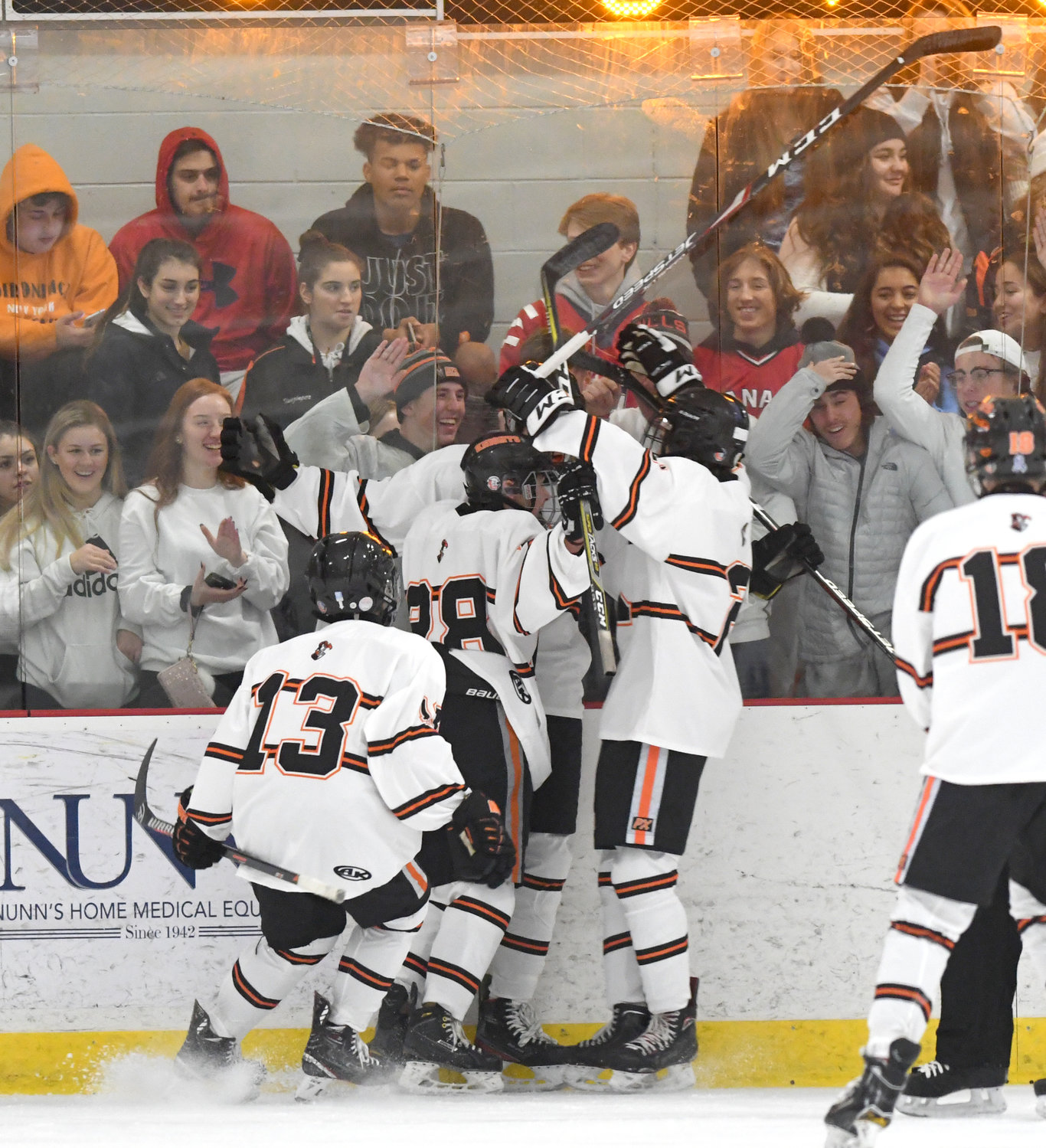 FIRST OF FIVE — Rome Free Academy hockey players celebrate the first goal of the game in their 5-2 win over Ithaca on Friday night at Kennedy Arena. Joey Gulla got the tally on an assist from Jake Hall.
(Sentinel photo by John Clifford) 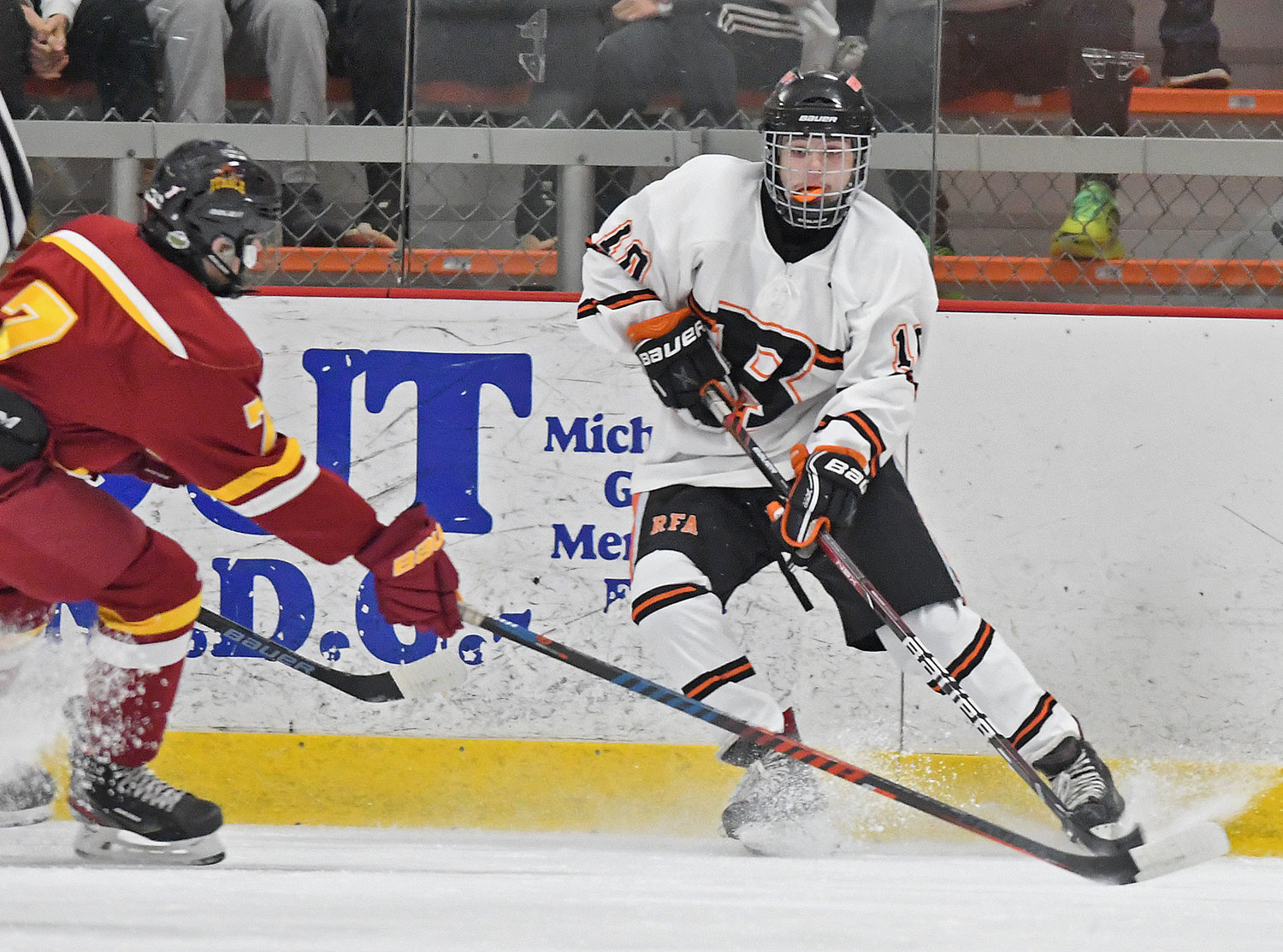 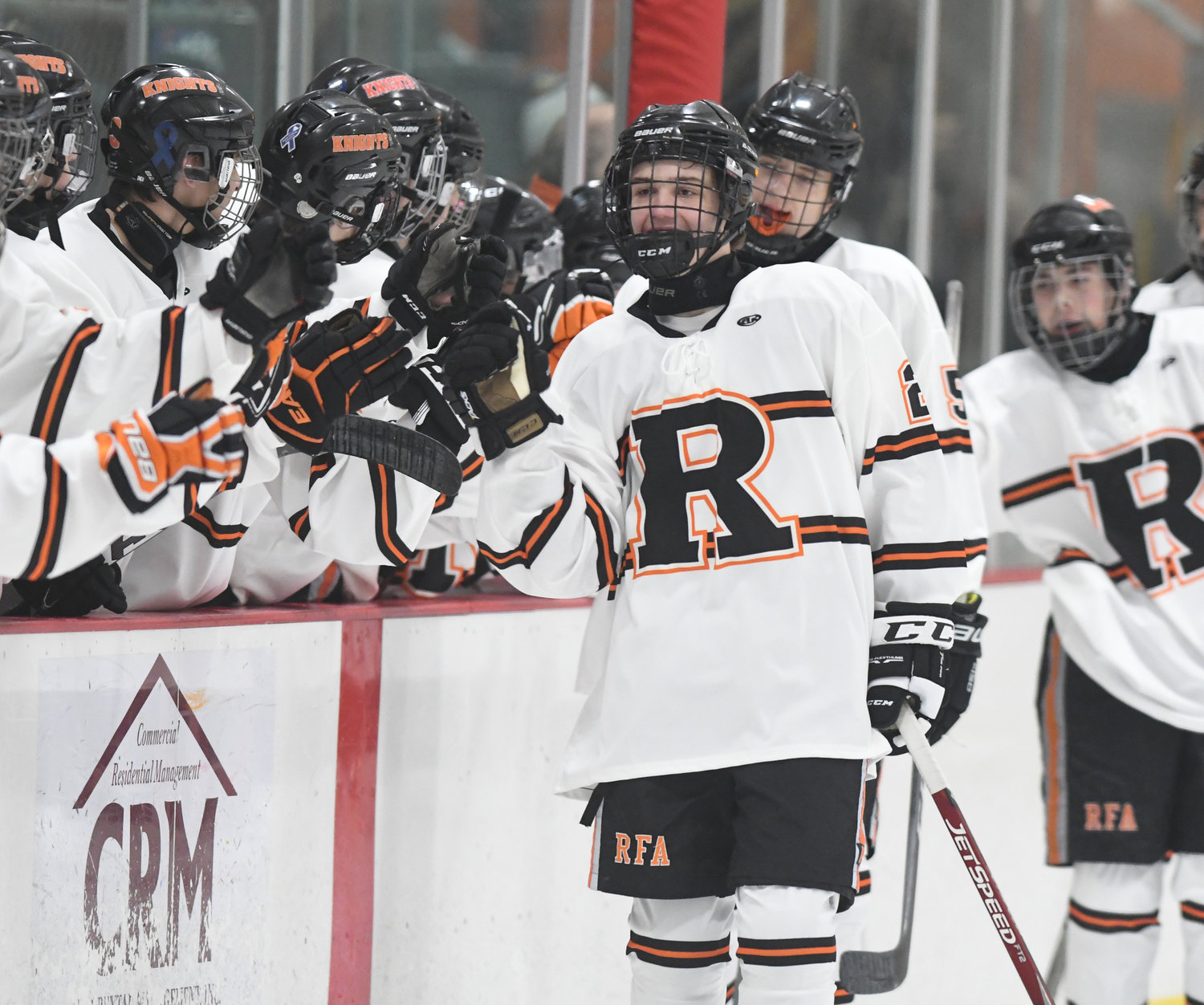 CELEBRATION TIME — Jake Hall celebrates the first goal of the game for Rome Free Academy Friday night at Kennedy Arena. Hall assisted on the goal by Joey Gulla and would get a goal of his own later in the 5-2 win over Ithaca.
(Sentinel photo by John Clifford) 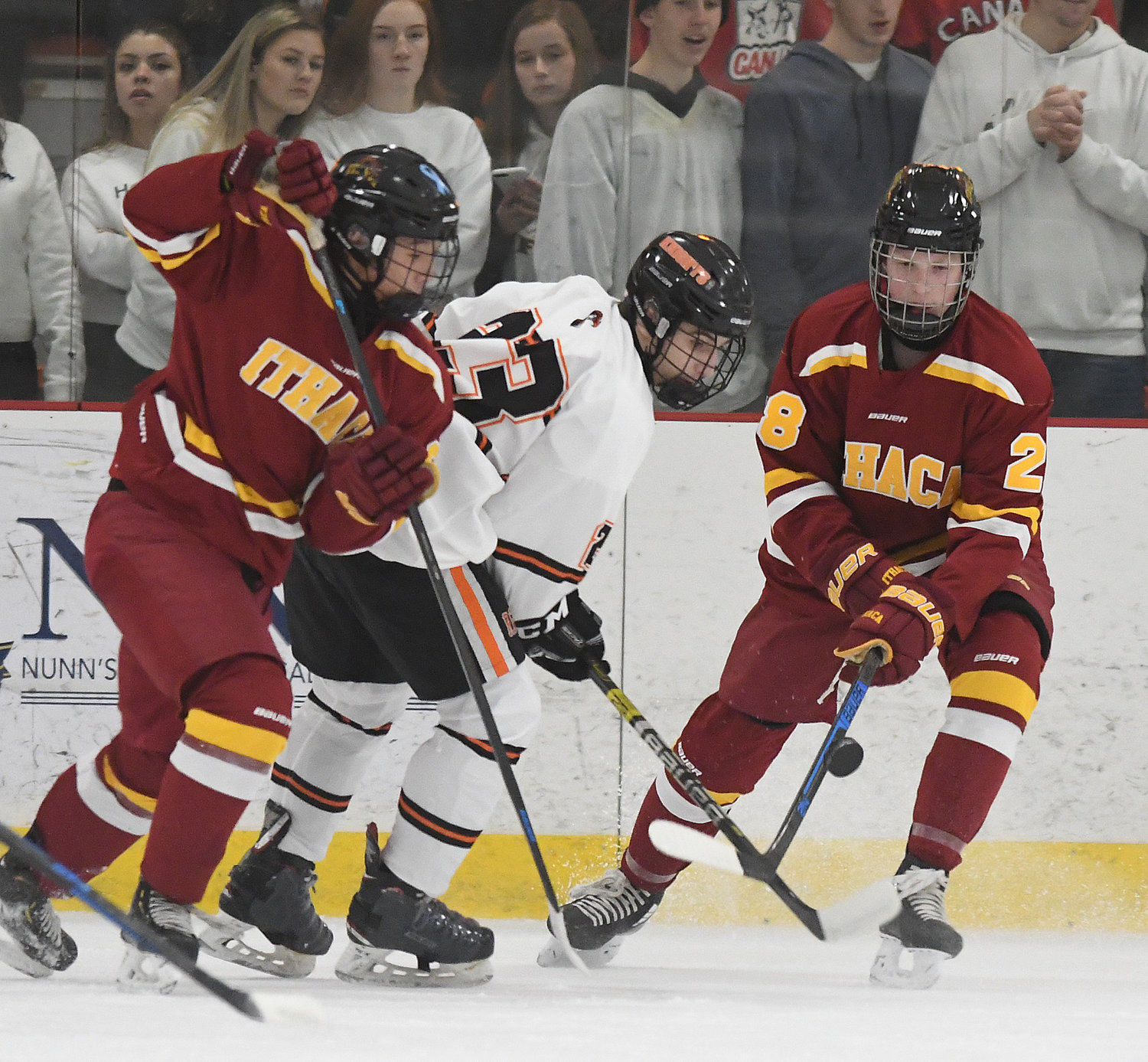 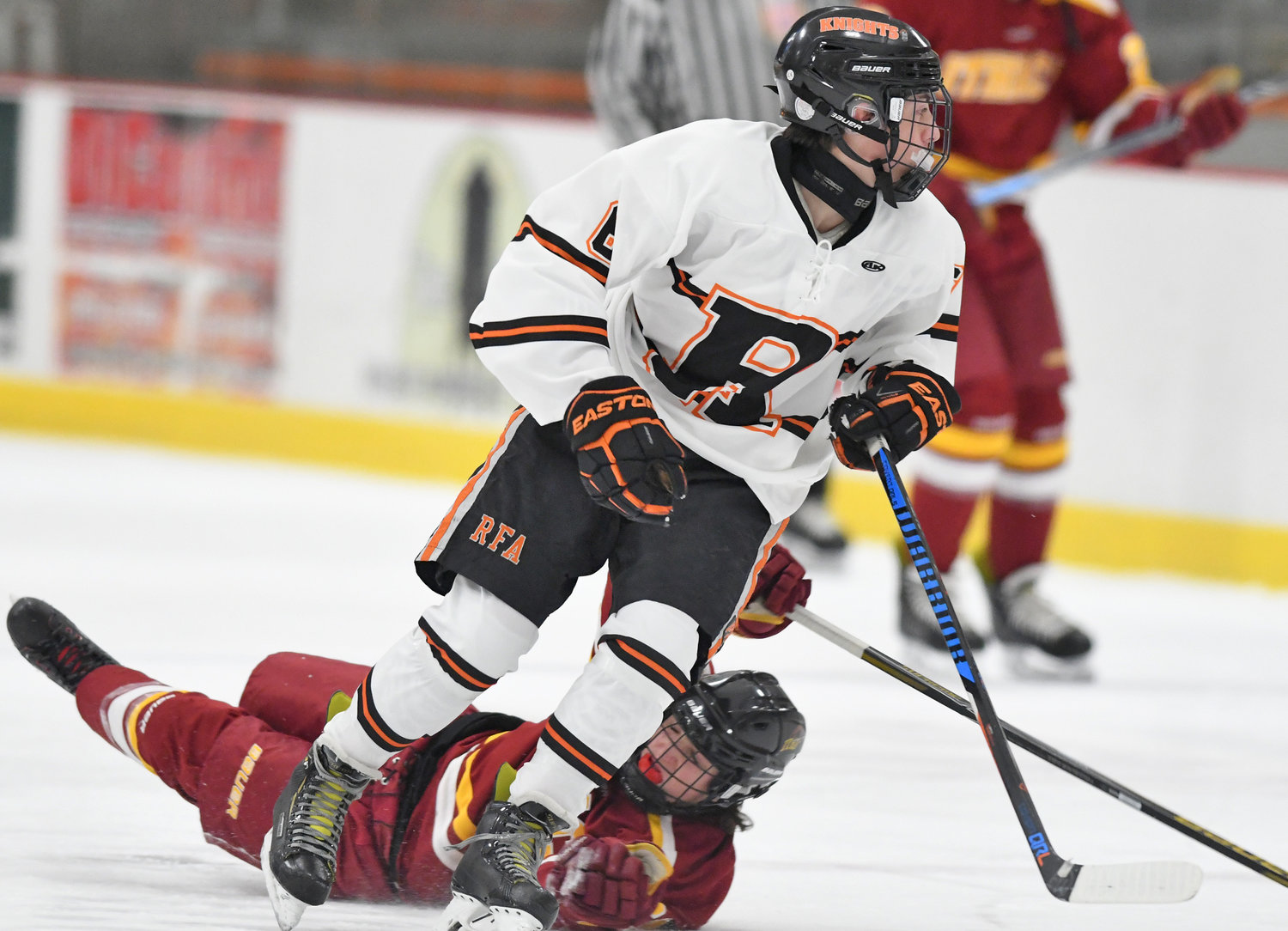 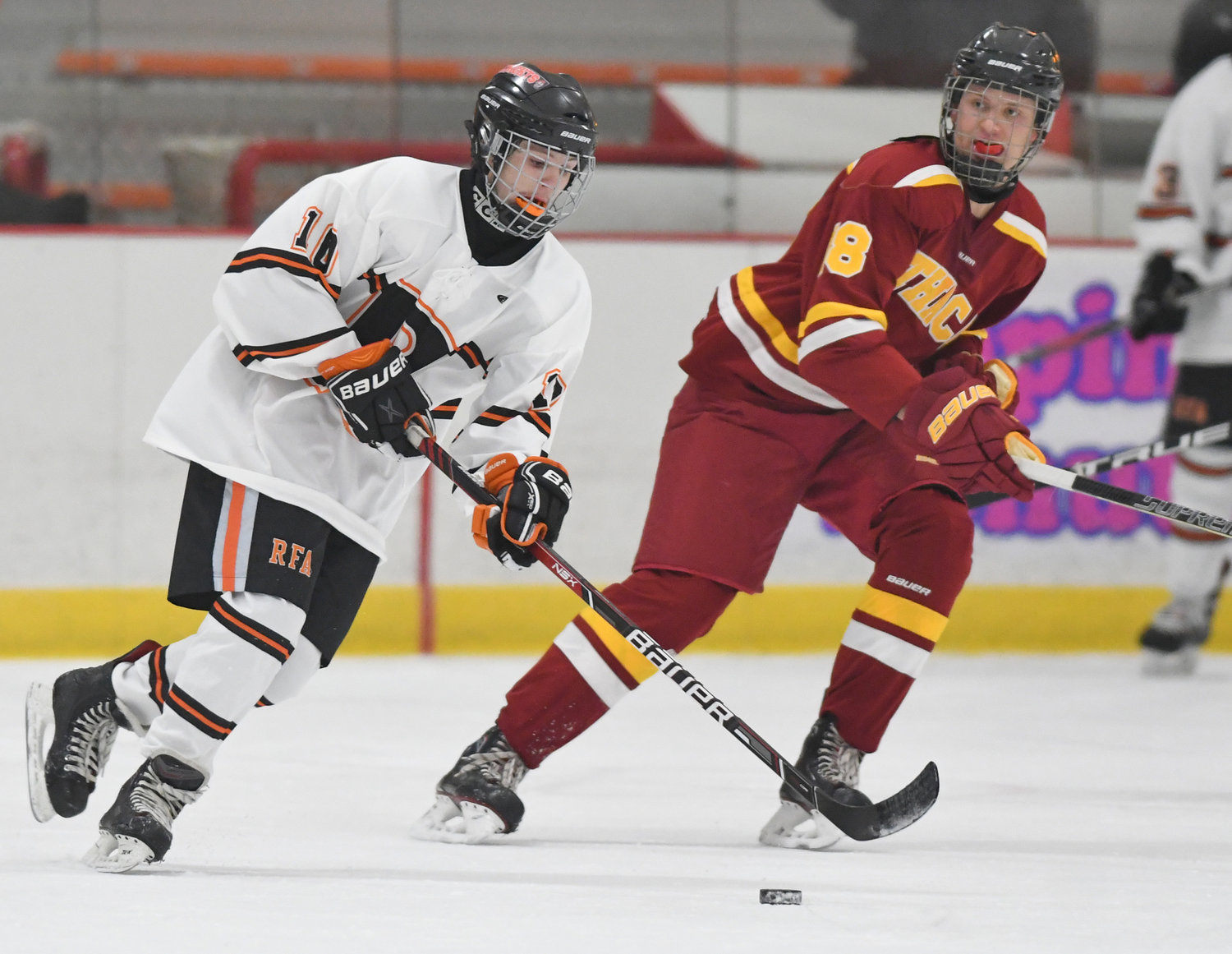 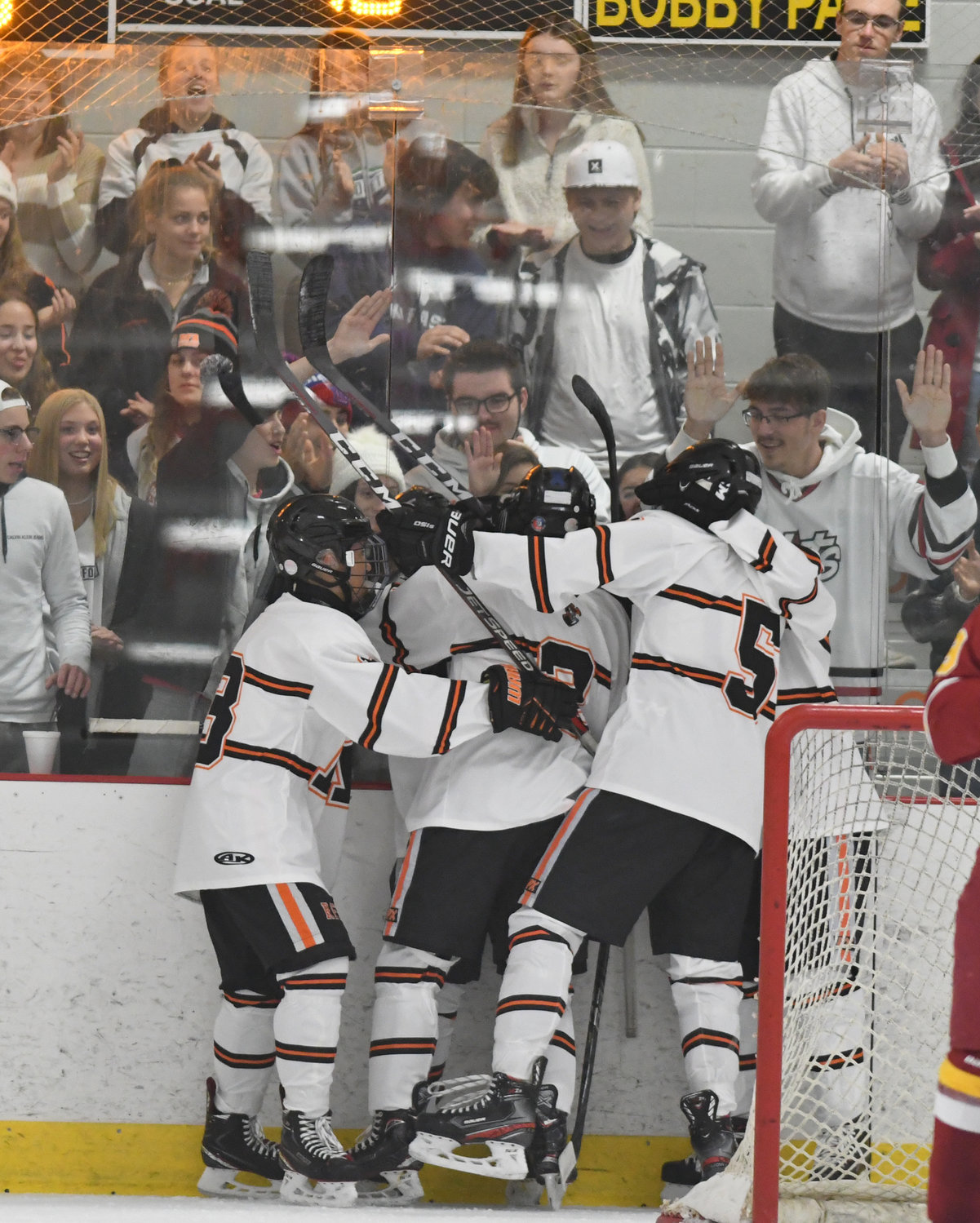 The Rome Free Academy hockey team won 5-2 over Ithaca in their home debut Friday night at Kennedy Arena. Co-captains Kyle Lubey and Griffin Eychner each scored once and added three assists as the team improved to 2-0.

Sporting new white home jerseys with a big block ‘R’ on the chest, RFA opened the scoring 4:31 into the game. Joey Gulla grabbed the puck and drifted from right to left between the face-off circles and fired home a wrist shot past Ithaca goalie Evan Mielbrecht. Jake Hall got an assist on the play, and RFA was up 1-0.

The Black Knights added to their lead with a power-play goal with 3:18 left in the first period. Gulla hit defenseman Jared Hussey with a right-to-left pass for a wrist shot into the open left side of the net. Gulla and Lubey each were credited with assists.

“We did some good things and the scoreboard showed that,” said RFA head coach Jason Nowicki after the win. He called the effort “tentative,” and said “I’d like us to be a little more aggressive on the boards and with loose pucks.” But the team scored first, and that was part of the plan. “That’s always the goal, a quick start.”

Ithaca cut the lead to 2-1 with a power play goal of their own seven minutes into the second period. Samuel Hynes-Klempa scored the first of his two goals in the game on assists from Thomas Kopelson and Colden Goodrow. But with RFA back on the power play just under two minutes later the hosts made it 3-1 on a goal by Hall. Eychner pushed a pass to Hall as he hit the Ithaca blue line with a full head of steam. Hall ripped on past Mielbrecht. Eychner and Lubey collected assists on the tally.

RFA would stretch the lead to 5-1 with two more in the third period. First it was Lubey with 11:07 left in the game, cruising in and firing off a shot between the legs of the defender guarding him. The screened shot found the back of the net, with Eychner assisting again. The two would link up again two minutes later, with Eychner getting an assist from Lubey as he took the pass and got off a wrist shot that hit the mark.

“Our forecheck is energy-focused,” said Lubey after the win. I sets the tone for the rest of the game, he said. But, he noted, as a center, he also has a big role on defense, and “I take responsibility for the defense.” Though there were lapses on defense, the team also used an efficient night on offense to score five times on 21 shots. “We finish our chances,” he said of the solid shot-to-goal ratio.

On his goal, Lubey said, “my plan was to get a shot on goal,” and when he had the chance to use the defender as a screen, he took it.

The visitors trimmed the lead to 5-2 on a power play with 4:04 left in the game. Hynes-Klempa struck again, this time on assists from Kopelson and Zach Neely. He collected a rebound low on the left side of RFA goalie Isaiah Nebush and shot high over the sprawling goalie.

But Nebush allowed no more goals and RFA got the 5-2 win. Nebush made 30 saves to earn the win. Mielbrecht made 16 saves in the loss.

Nowicki said the team will have to get more shots on goal and crash the net for more rebounds.

The coaching staff still has work to do figuring out how to deploy a young, inexperienced group of defensemen, Nowicki said. He split up the two most experienced defenders — Hussey and co-captain Aaron Russell — to put them each with players learning the ropes. Russell skated with Antonio Bevilacqua, and Hussey rotated with several others throughout the night. The plan was, the coach said, to “see what would give us a lift.” He admitted: “We’re asking a lot out of Jared.”

Nowicki said he was pleased with the “balanced attack we’re looking for,” as the five goals came from five different scorers.

RFA plays its first league game against Christian Brothers Academy-Jamesville Dewitt at 7 p.m. on Tuesday at Kennedy Arena. Nowicki said the game throws RFA “right into the mix,” against a young team.

He said he expects “a really, really good game Tuesday,” one that could have implications come playoff time.