In an opening game full of offense, the New Hartford run game was better than the Rome Free Academy passing attack Friday night. 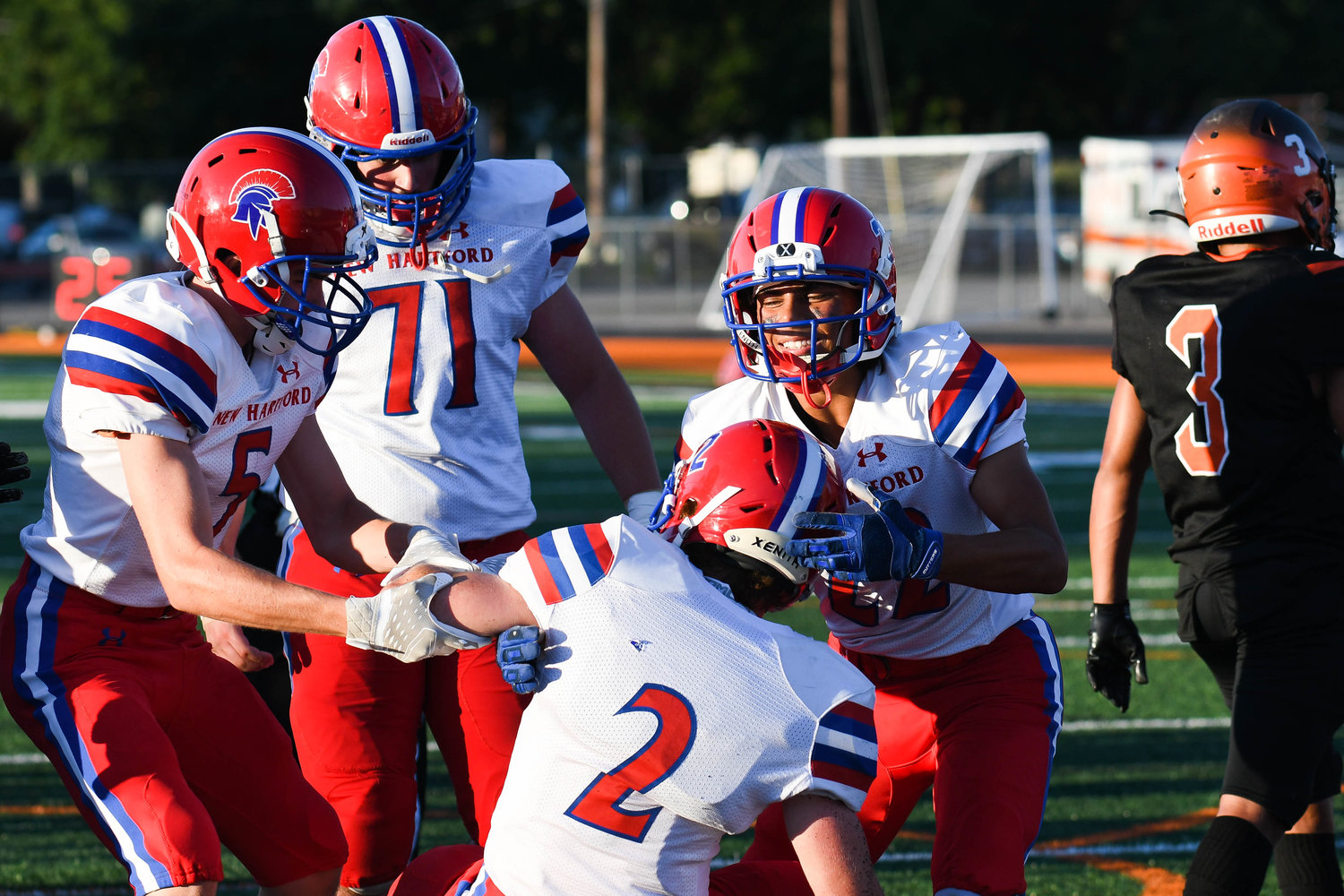 New Hartford players celebrate in the end zone after Cole Raux (2) scores a touchdown against Rome Free Academy on Friday at RFA Stadium in Rome. Raux piled up almost 140 total yards and scored four times in the Spartans' 52-26 win. With him are, from left, Rowan Gall, Michael Graziano and Angelo Santomassino.
(Sentinel photo by Alex Cooper) 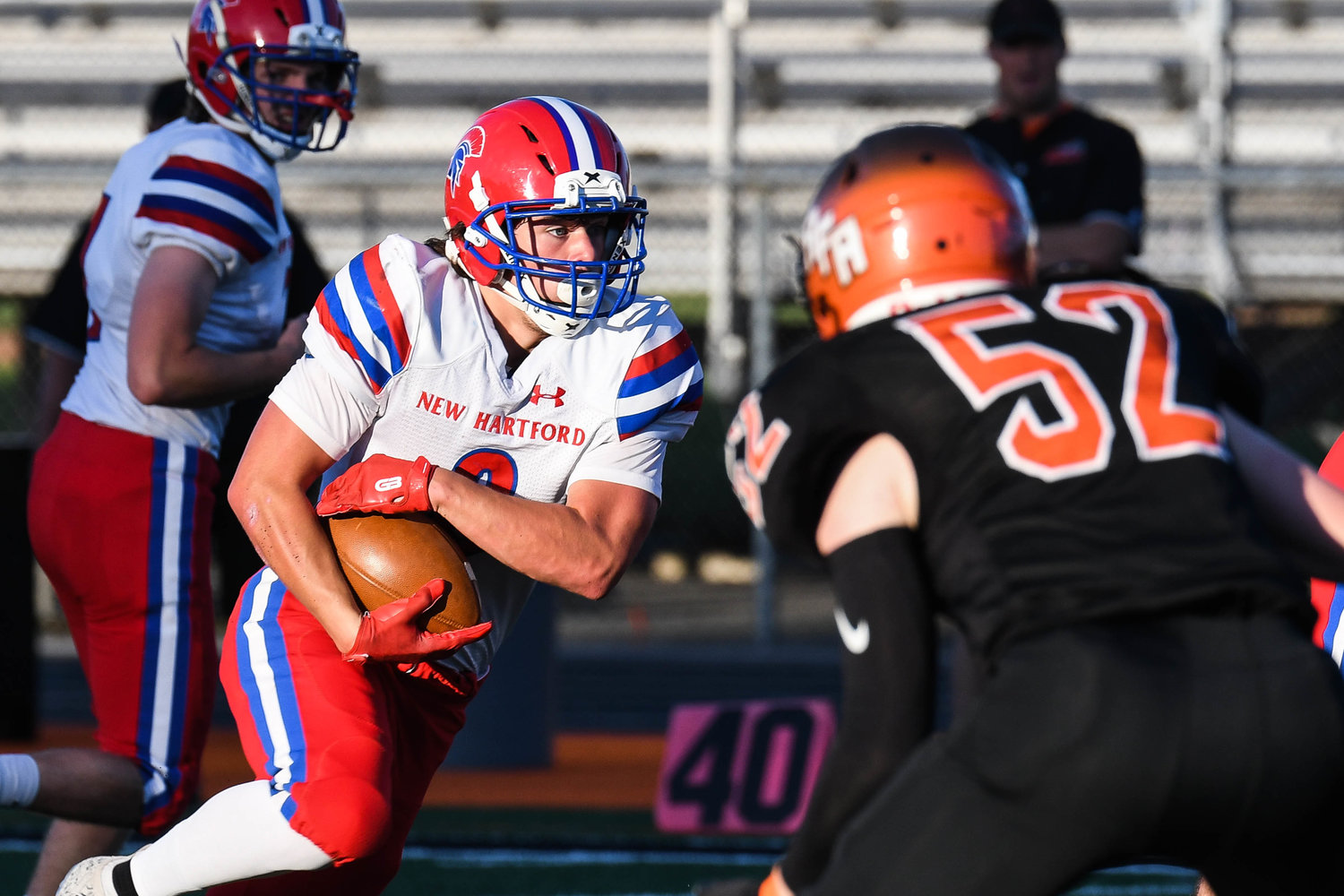 New Hartford running back Alex Collver runs during the game against Rome Free Academy on Friday at RFA Stadium. Collver ran 21 times for 127 yards and a score in the team's 52-26 win to open the season. Moving in for the tackle is RFA's Josiah Holmes.
(Sentinel photo by Alex Cooper) 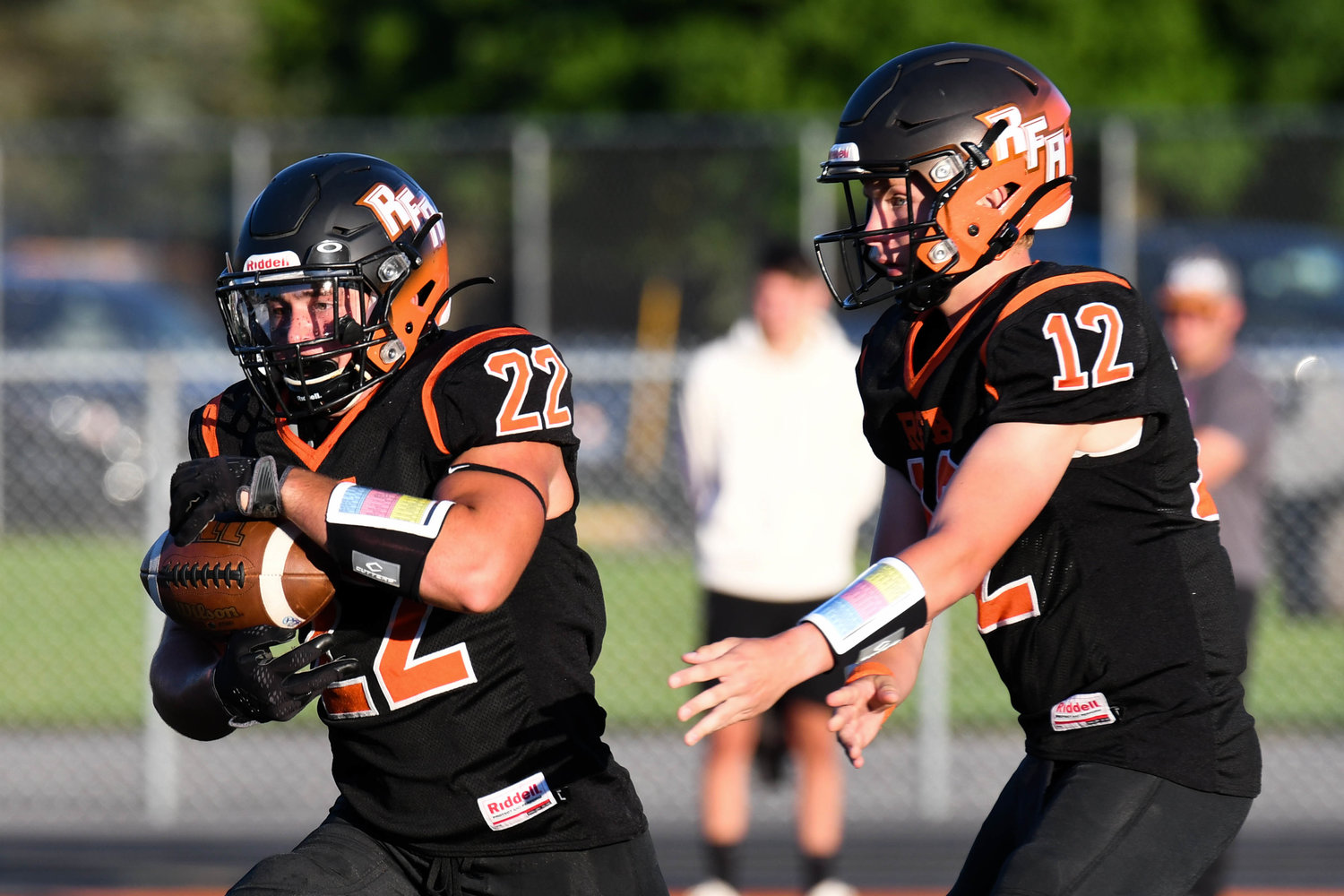 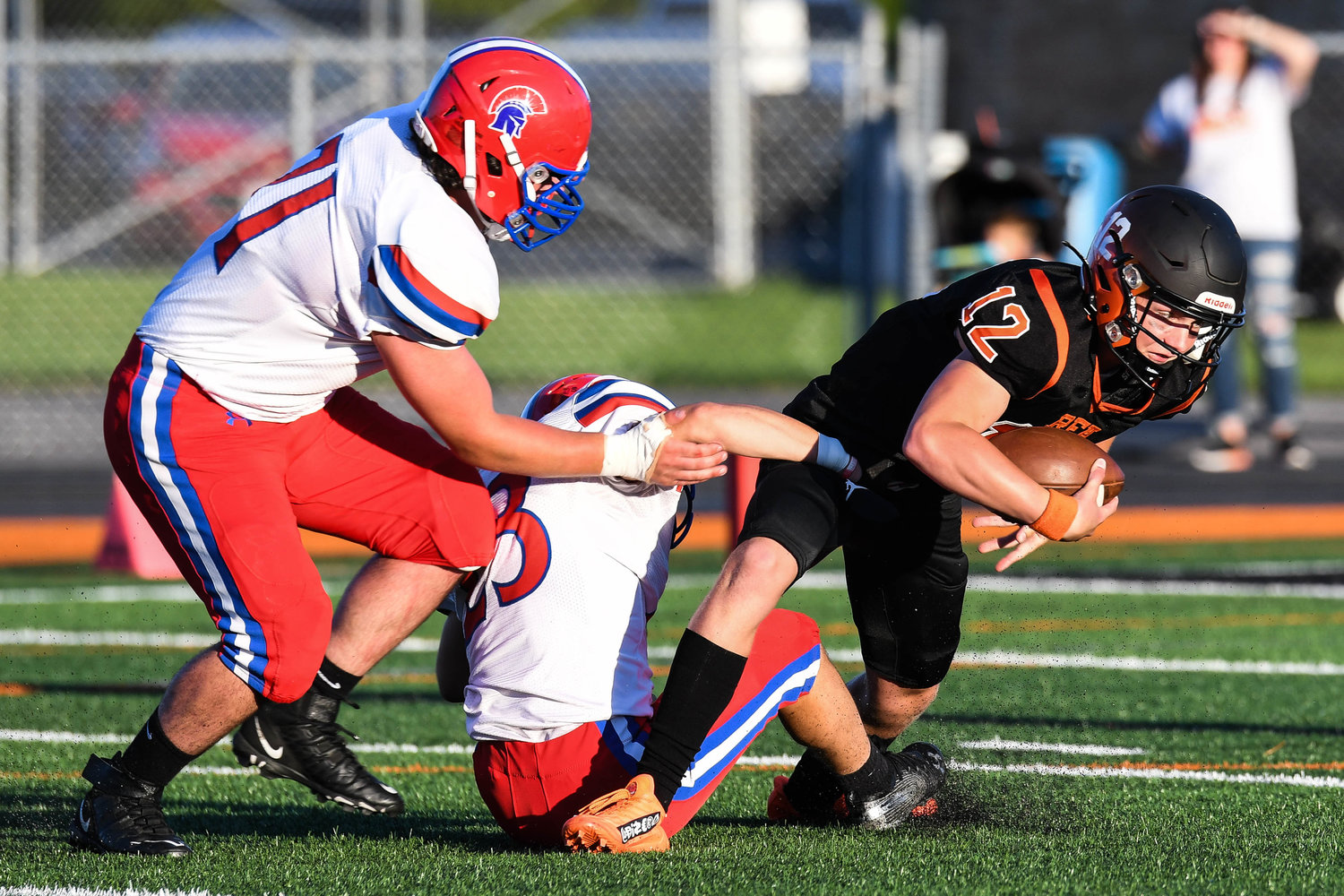 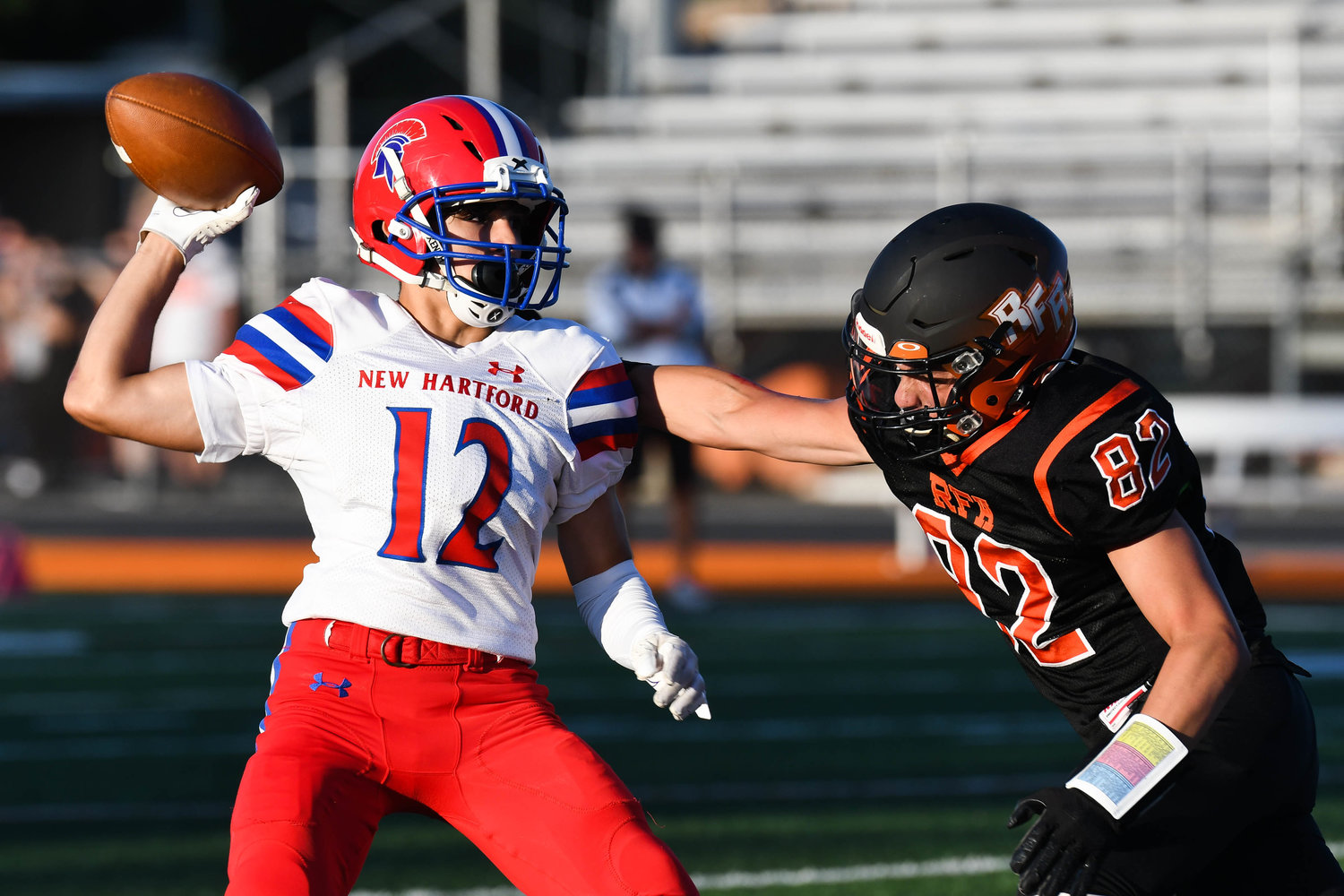 The twin threats of Alex Collver and Cole Raux were on full display for the Spartans. Raux ran for 97 yards and three scores — mostly as the Wildcat quarterback — and had two catches for 41 yards and another score. Collver ran 21 times for 127 yards and a score.

"We have a couple ball carriers we think are pretty good players," said New Hartford head coach Jim Kramer after the win. "We pride ourselves on the run. I was very pleased with the run." The team leaned heavily on the wildcat formation, with Raux taking the snaps. That's a continuation of last season's plan, Kramer noted. "They're two pretty dynamic ball carriers," so he wants them on the field together as often as possible.

Kramer's plan is to run the ball then look for one-on-one situations for the receivers so the passing game can work. "Our pass game is continuing to improve. I think I would call it an opportunistic pass game."

The Spartans started the game with a 39-yard drive composed of all runs. Collver ran five times for 30 yards, including a two-yard touchdown straight up the middle to make it 6-0. After a three-and-out by RFA, the Spartans went 31 yards on three runs, aided by an RFA penalty. This time it was Raux, who kept the ball and took it 17 yards for the score. He then caught a two-point conversion pass to make it 14-0 with 5:35 left in the first quarter.

RFA scored its first touchdown of the season on a pass-heavy drive. Starting on its own nine, RFA went to the air immediately. Quarterback Evan Carlson-Stephenson went vertical on the first play, hitting Jack Lawless down the sideline to midfield. After a 22-yard run by Sal Martelli, he hit Lawless again, this time for nine. Two plays later he connected with Lebron Bowman for a 17-yard score over the middle. That made it 14-6 but the extra point by Jack Pylman was blocked.

The lone score of the second quarter was a touchdown for Dominic Ambrose to Raux, a 24-yard pass to the pylon. The extra point by Mateo Ripa made it 21-6. The 44-yard drive was keyed by two passes from Ambrose to Raux for a total of 41 yards.

Bowman brought the crowd back into the game with a 96-yard kickoff return for a touchdown to start the second half, making it 21-12. But later in the quarter a botched option gave New Hartford the ball on the RFA 27-yard-line when Logan Banek fell on the ball. Raux capped off the drive with an 11-yard run on keeper and it was 28-12.

Again RFA rallied with a touchdown to trim the lead to eight, this time when Carlson-Stephenson hit Lawless from seven yards out and the senior receiver managed to get a foot down just inside the pylon. Ricky Fernandez caught a pass on the conversion attempt.

The Spartans added a 59-yard passing TD by Ambrose to Angelo Santomassino, a 50-yard wildcat keeper by Raux (who hurdled a defender on the play) and a 13-yard score on a run up the middle by Banek.

"We had some different guys step up," Kramer said. And that's important, he noted, because teams will key on Collver so others need to help carry the load on offense.

Defensively, Kramer said the team adjusted throughout the game to try to stop RFA's dynamic players, especially Lawless. With no scrimmage this season, the team has to do better by taking fewer penalties, substitute cleanly and not burn unnecessary timeouts. With the move back up to Class A, he added, the team has to "continue to improve our depth."

Carlson-Stephenson was 20-for-34 passing for RFA for 219 yards and three scores. Lawless had 10 catches for 133 yards and a score. Bowman made four catches for 62 yards and two TDs to go with the special teams score.

Martelli led RFA in rushing with 11 carries for 66 yards.

"Did some good things, did some bad things," said RFA head coach Jake DerCola. The team "battled and battled," but couldn't convert enough times when there were turning points in the game.

"Sal ran hard up the middle and we did some great things with the pass," DerCola said. He said he told his junior quarterback that "there's more plays to be made," and Carlson-Stephenson is ready to make them. The key is to be consistent, and when there's a negative play to bounce back immediately.

The challenge for RFA, as it has been in recent years, is on defense. "We are undersized so we have to be scrappy and relentless," and give teams a lot of looks to confuse them. "We knew they're going to run," but with only two weeks to learn a new defense after a change in coordinator from last season, the unit is still learning. "We're still improving and still learning," he said of his young team that has only 10 seniors.

Next up for RFA is a home game against league foe Baldwinsville at 6:30 p.m. Friday.