Chemistry is key for the New Hartford girls soccer team.  According to seniors Anna Rayhill and Biddie Cliv, it is the quality that stands out for a top-ranked Spartans team. 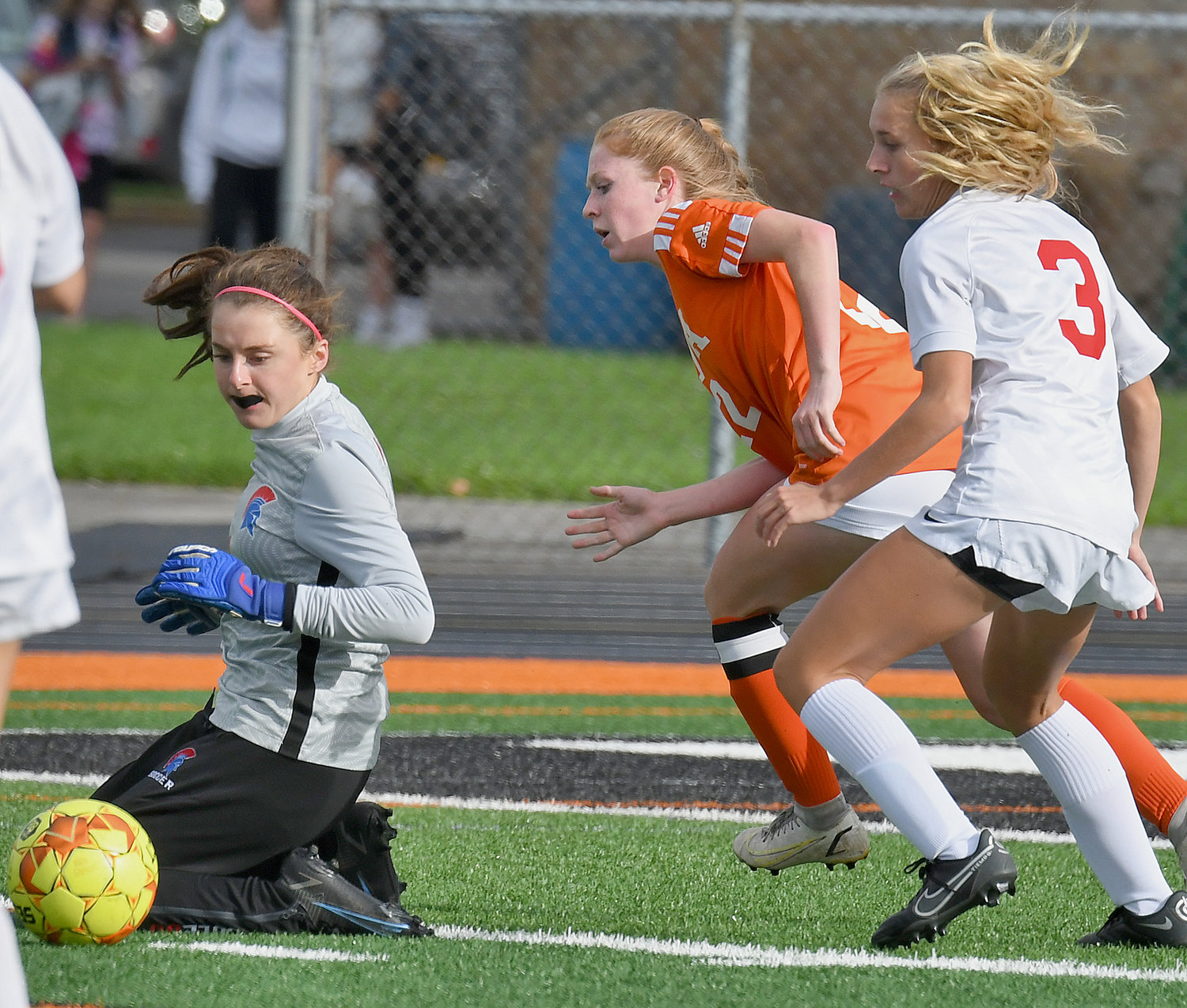 New Hartford goalie Savannah Cole slides to make a save in front of New Hartford teammate Grace Serafin and Rome Free Academy's Brynn Furbeck on Thursday at RFA Stadium. New Hartford won 8-1 to continue a unbeaten streak that is at 46 games.
(Sentinel photo by John Clifford) 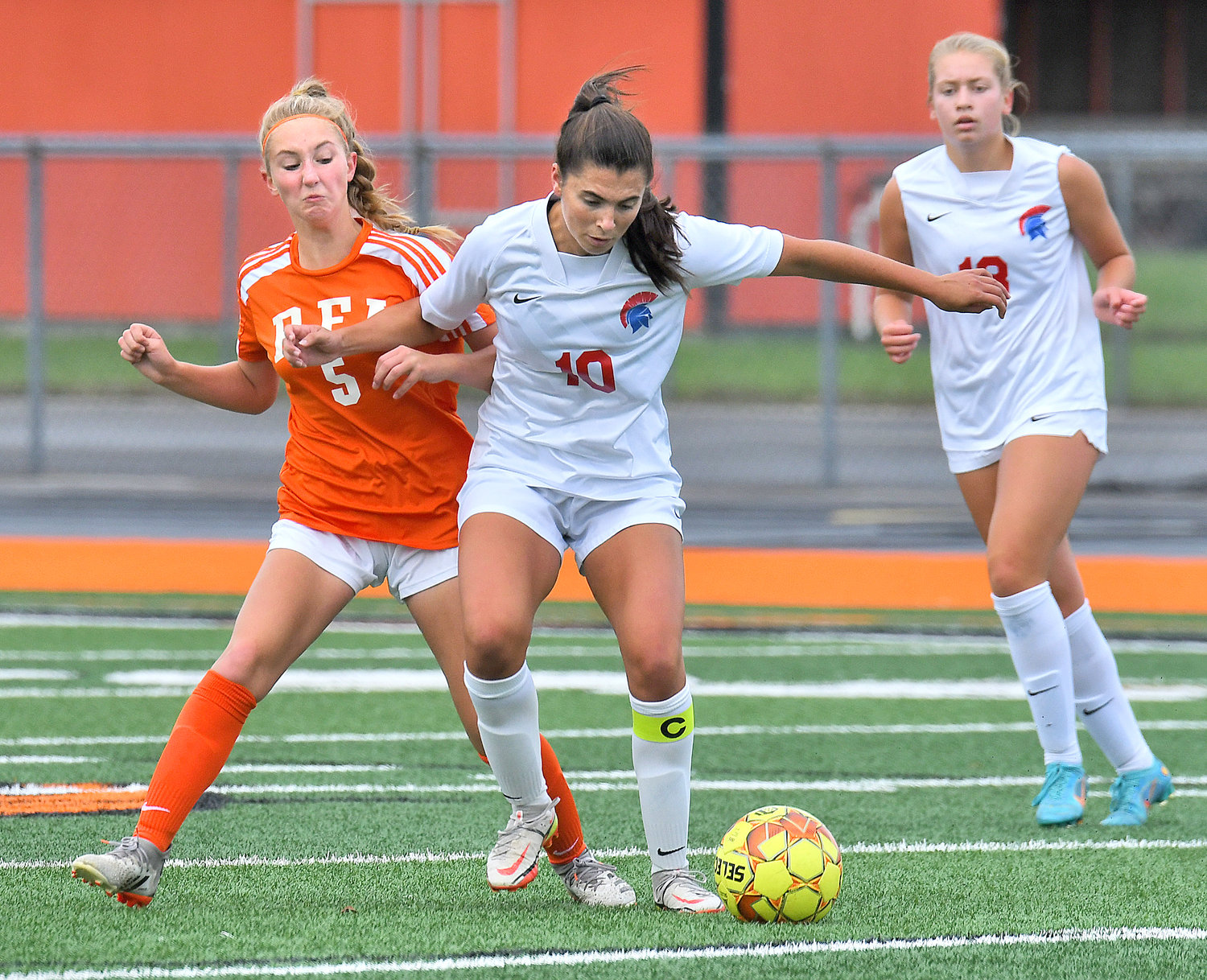 New Hartford's Talia Vitullo boxes out RFA's Brooke Egresits from the ball in the first half Thursday at RFA Stadium in Rome. Willa Pratt, who had two goals and two assists in the game, looks on.
(Sentinel photo by John Clifford) 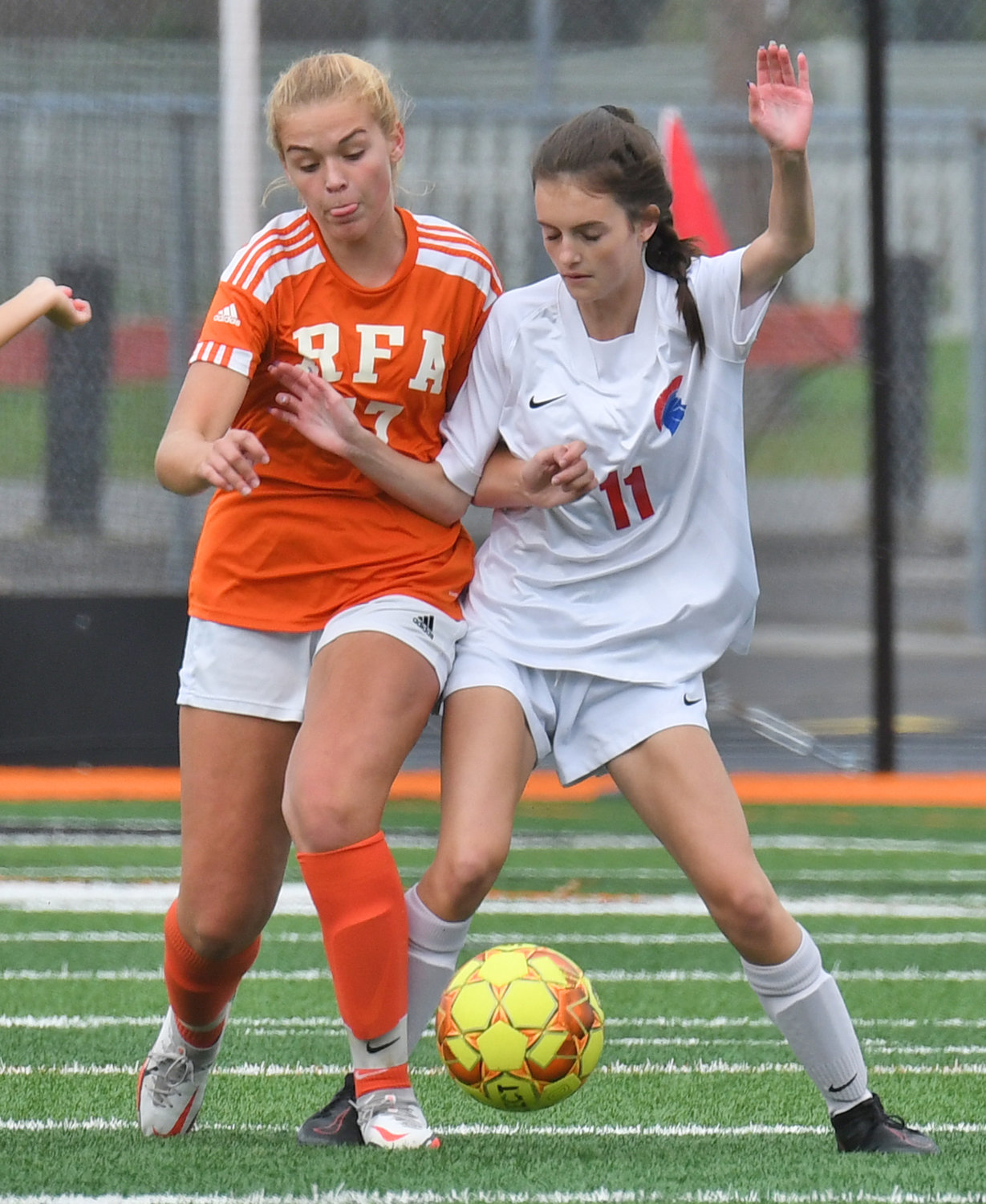 Rome Free Academy's Amelia Furbeck and New Hartford's Kacey Richards fight for the ball during the first half Thursday at RFA Stadium. New Hartford earned the win and improved to 8-0-1 this season. RFA is 5-4 overall.
(Sentinel photo by John Clifford) 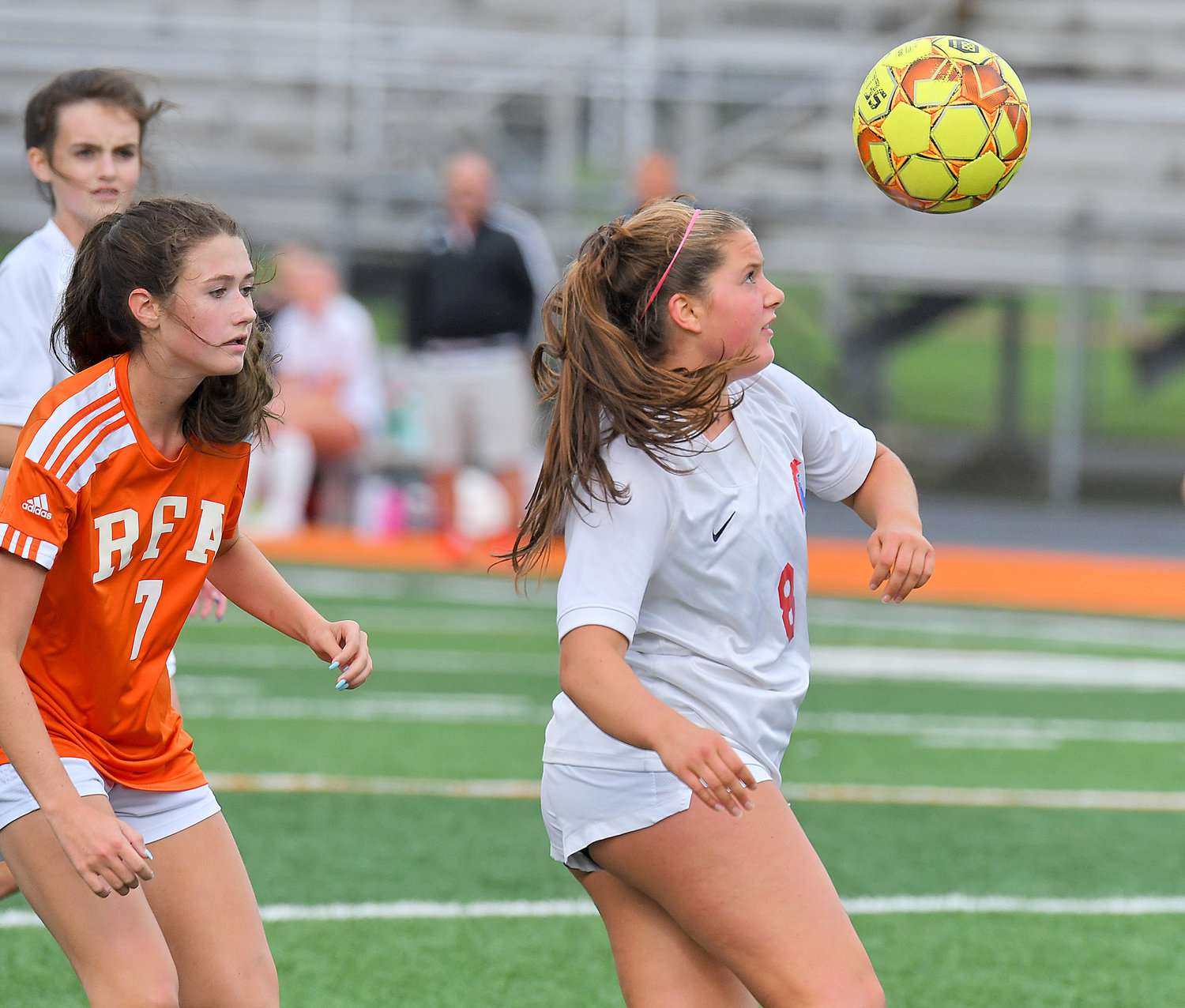 According to seniors Anna Rayhill and Biddie Clive, it is the quality that stands out for a top-ranked Spartans team that is the reigning state Class A champions and has rolled to one of the longer undefeated stretches in the New York State Public High School Athletic Association’s record books.

“Our team is super-tight,” said Rayhill, who is among nine seniors on this team. “It has really been natural for us. A bunch of the starting lineup has been playing together since we were 12. I think the consistency has brought us together.”

The team, coached by Frank DuRoss Jr., also seemingly keeps things light while generating positive results with help from a talented roster on the field. The team plays a quick, attacking offensive game while also possessing a solid defense.
“We only lost a few players from last year, but the ones who are stepping up in their spots are doing a really good job,” said Clive, who who wore the captain’s band Thursday against Rome Free Academy. “It is going pretty well.”

That was apparent for New Hartford against its Tri-Valley League East foe RFA as Rayhill scored five time, classmate Willa Pratt added a goal and two assists and the defense pitched in as the Spartans rolled to an 8-1 win at RFA Stadium.

Tri-Valley League East foes New Hartford and RFA about to do those soccer/Futbol activities. pic.twitter.com/5bRU2OCXBb

Senior Talia Vitullo’s goal helped New Hartford build a 5-0 halftime lead after the team scored four times in about nine minutes earlier in the first half. Classmate Alex Volo scored in the second half for the Spartans, who are ranked No. 1 in the most recent New York State Sportswriters and Coaches Organization for Girls Sports poll.

The result pushes New Hartford to 45-0-1 in the last 46 games dating back to the altered 2020 season. The stretch is one from tying Niskayuna for the fourth-longest undefeated mark in state history. The state record for undefeated games is 64, set by Spencerport from 2016 to 2017.

“(The undefeated streak) is not our main priority. We still tried to schedule the toughest non-league games we could. We have wanted to challenge ourselves,” said DuRoss, referencing a tie over Massapequa and a 1-0 win against Monroe-Woodbury earlier this month. “The ultimate goal is a state championship. If I had to trade one for the other, I’d take the state championship.”

Thursday’s game was just the second time the Spartans have allowed a goal this season as RFA freshman Amelia Furbeck scored her team-best 11th goal of the season with about eight minutes to go in the game and some of New Hartford's starters on the bench.

New Hartford (8-0-1 overall) has outscored teams 50-2 this season. The team has another non-league game scheduled for Tuesday at West Genesee.

“We just like to play soccer. We just like to be out there,” said Rayhill, who had one stand out early in the second half as she found the upper right corner while falling to ground from about 30 yards out. “We just play hard because you only get so many more games, especially as a senior.”

New Hartford plays with three defenders on the back line, with Clive leading the group. She is joined in the starting group by classmate Mia Roberts and junior Grace Serafin, who has stepped up to fill a spot.

They have also been key in helping eliminate trouble for the goalkeepers in senior Savannah Cole (5 saves Thursday) and junior Abby O’Connor (11 saves). The team has seven shutouts in nine games.

“We play as a team. That’s what really helps us. We attack and defend together,” said Clive, who said she doesn’t plan to play soccer after this season. “There’s nothing predictable about us.”