Check out these fall sports highlights. 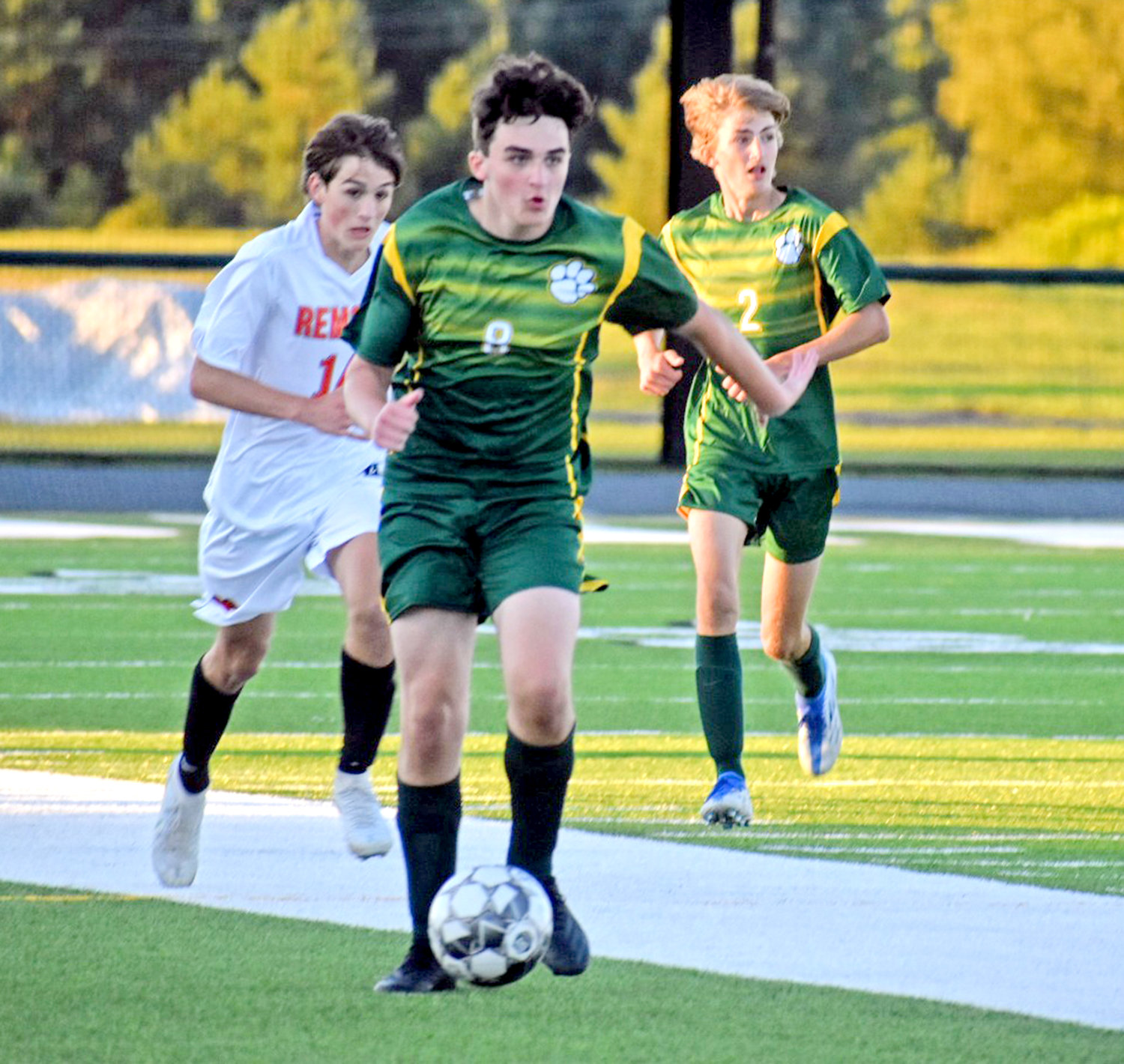 David Abraham moves the ball upfield Thursday for Adirondack with a Remsen defender in pursuit. Adirondack teammate trails the play at right. It was Kaun’s penalty kick conversion early in the second half that gave the Wildcats a 1-0 win.
(Photo courtesy of Nichole Kent) 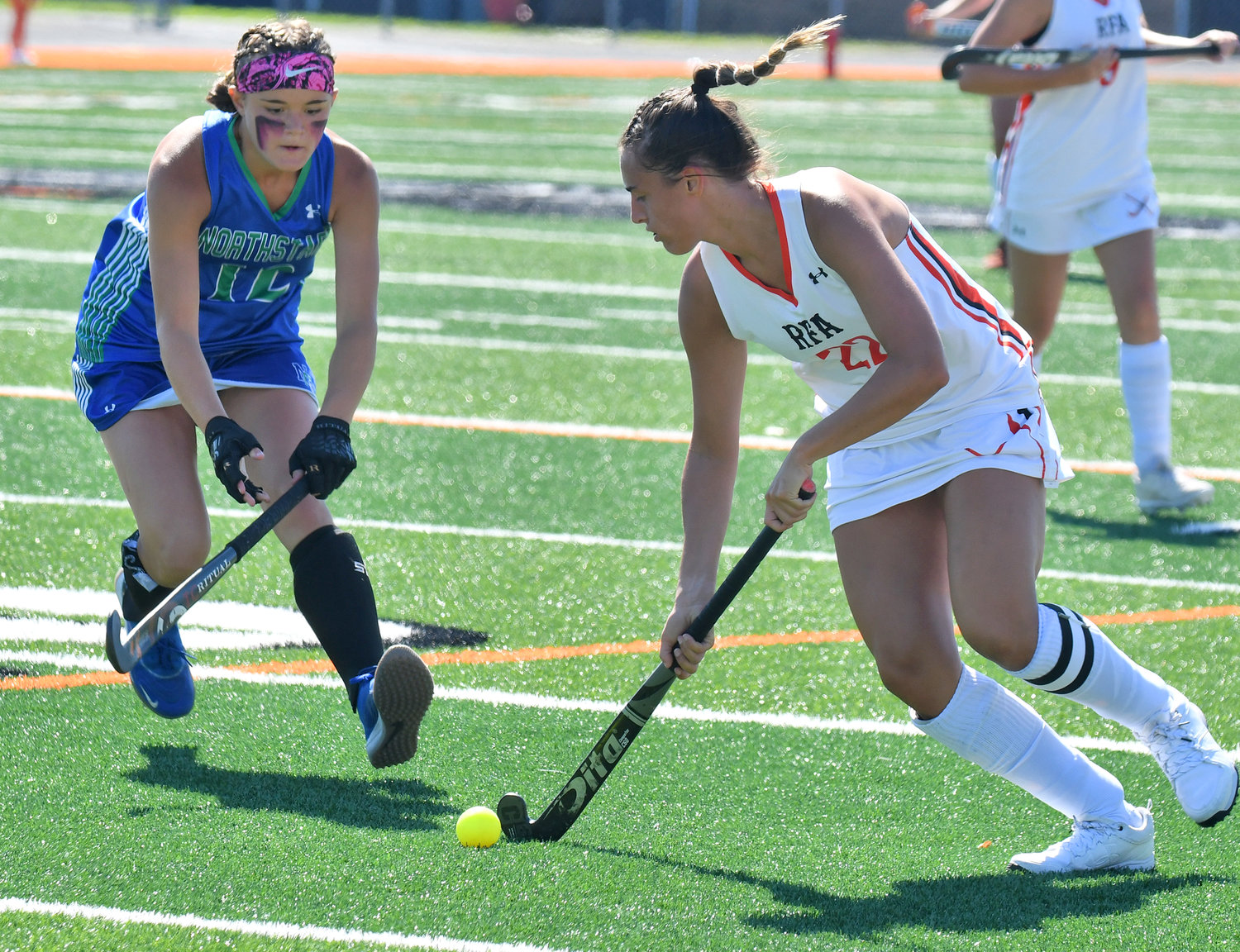 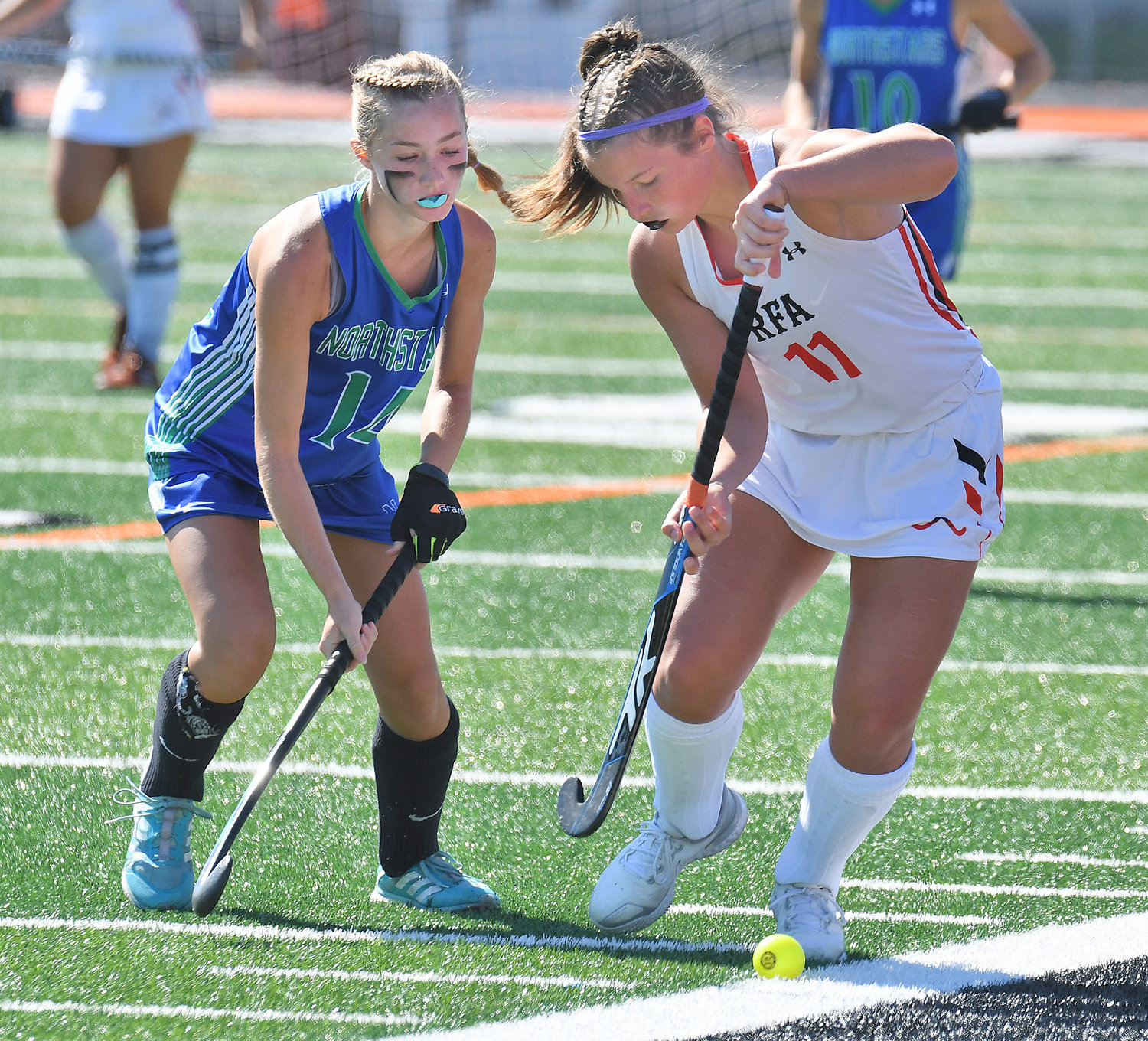 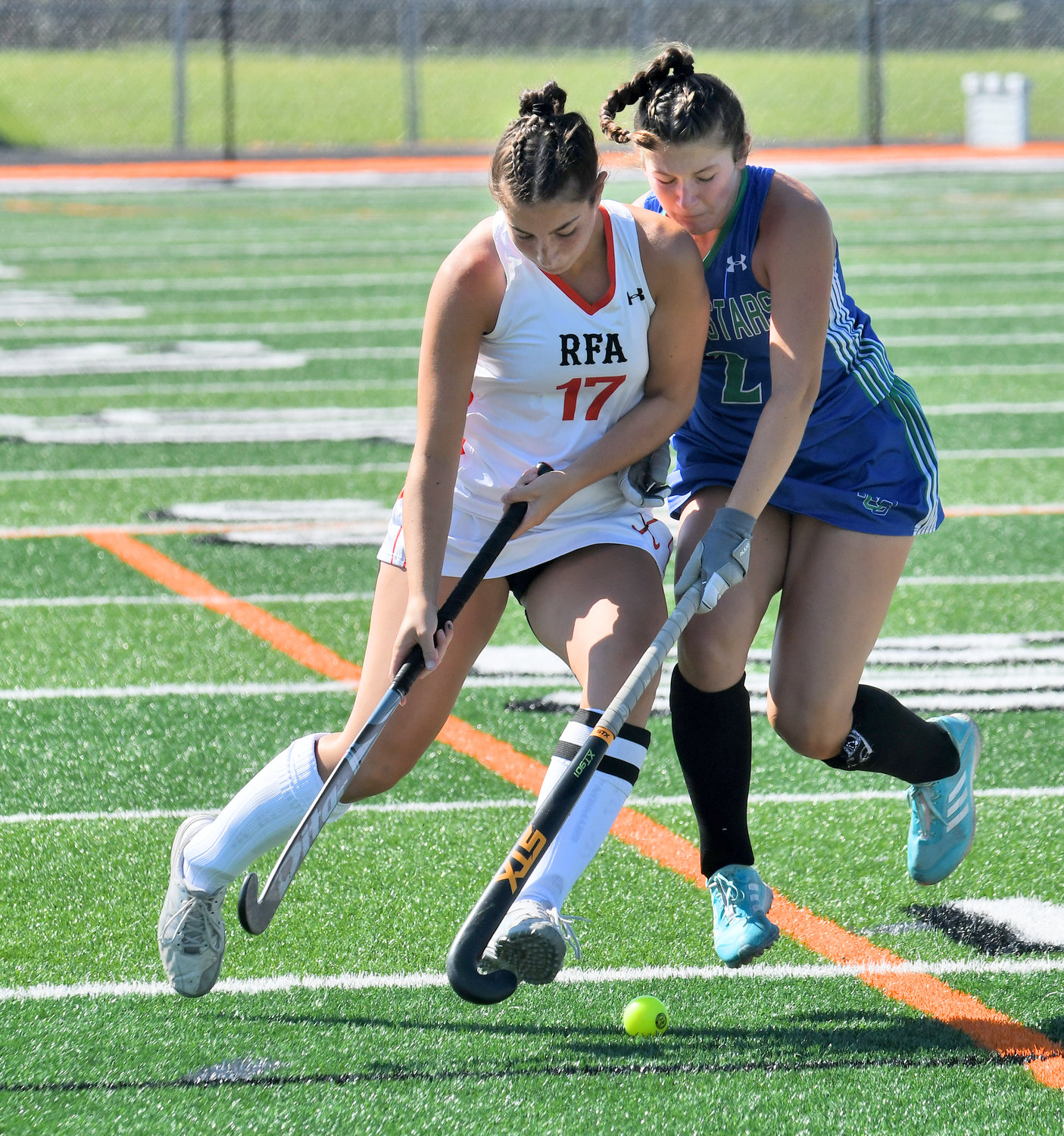 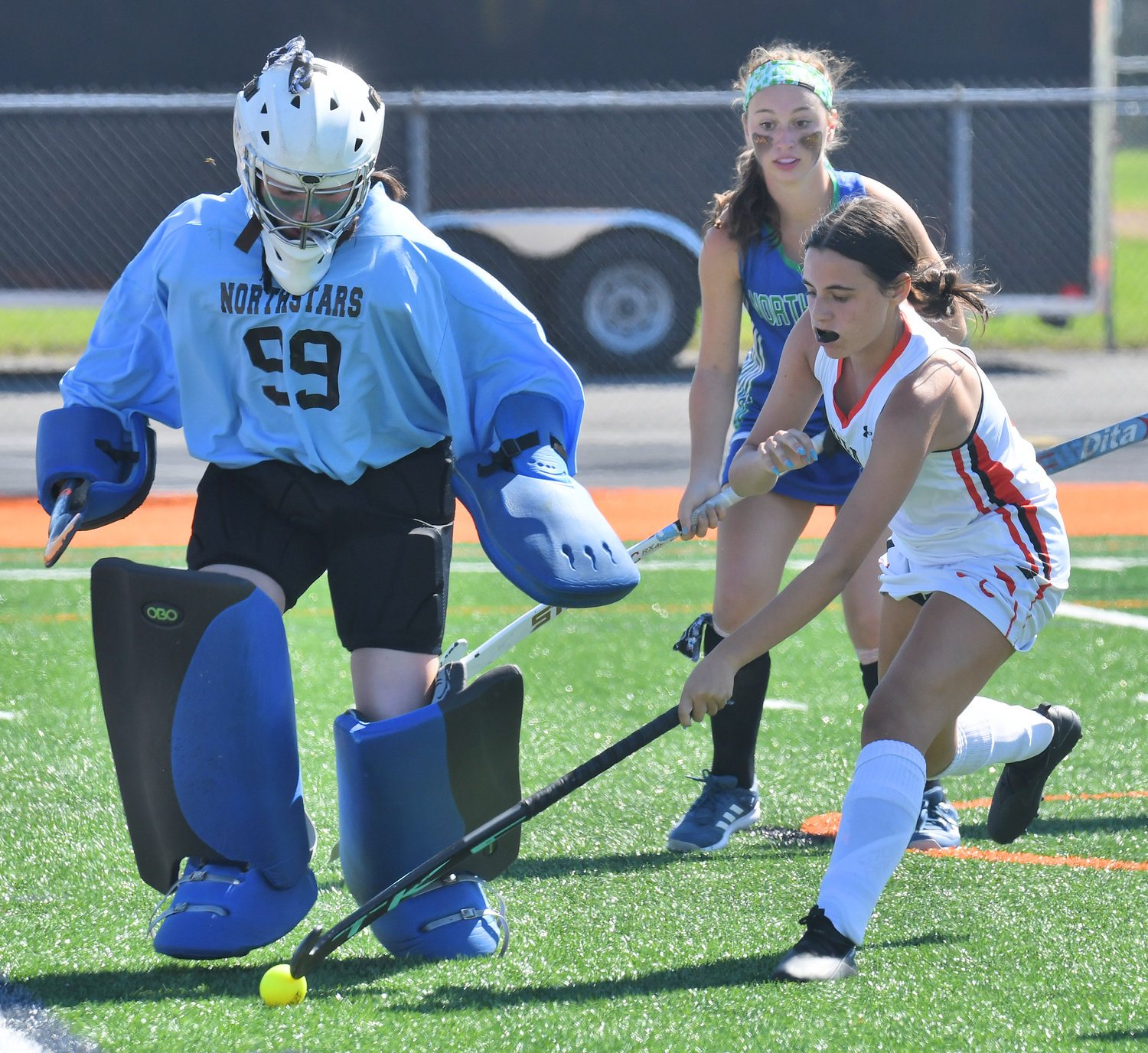 Cicero-North Syracuse goalie Avery Richardson tries to kick the ball away from Rome Free Academy sophomore Dani Kopek during the first half of the field hockey opener Friday at RFA Stadium. The Black Knights lost 5-0.
(Sentinel photo by John Clifford)
Previous Next
Posted Saturday, September 3, 2022 7:30 am

Adirondack’s Alexander Kaun scored on a penalty kick early in the second half in a 1-0 win over Remsen Thursday at home in a non-league game to start the season for both teams.

Wildcat goalkeeper Kaiden Bailey earned a shut out win in his varsity debut, stopping all seven shots he faced.

The defending Class A state champions led 4-0 at the half.

In net for the Spartans, Savannah Cole started and gave way to Abby O’Conor without a shot on goal. O’Conor stopped the lone shot she faced.

Camden plays at Oneida at 4:15 p.m. Tuesday in the league.

The RFA girls soccer team won 3-1 over host Holland Patent Thursday in the season opener for both TVL teams.

Mikayla McPheron, Mia Mirabelli and Brynn Furbeck each scored for the Black Knights. Ellyza Minicozzi and Amelia Furbeck earned an assist each.

For HP, Makenzie Stalker scored on an assist from Sophia Rachon.

Isabella Hobin made four saves in net for the Golden Knights.

Statistics for Westhill were not submitted.

Ella Greico scored and assisted on the other goal in New Hartford’s 2-1 win at Canastota Friday. The Spartans broke a 1-1 halftime tie with a third quarter goal to go ahead for good.

The other Spartans’ goal was tallied by Francesca Sardina-Boisen.

In goal for New Hartford, Emilee Clarey stopped 10 shots to earn the win.

New Hartford plays a non-league game at 6 p.m. on Wednesday at Vernon-Verona-Sherrill.

The Clinton field hockey got a 5-2 win over host Whitesboro Thursday. Gracen Grimm scored twice in the win.

Gretchen Grimm scored and had two assists for Clinton. Also scoring were Skyler McFadden and Lauren Rey also scored a goal each.

In the cage for Clinton, Chloe White stopped six shots for the win.

Whitesboro’s Addison Cook scored and had an assist on a goal by Casey Clausen.

Joshua Gorgas scored the game’s lone goal on an assist from Denis Seferagic.

Whitesboro goalkeeper Devin Trevisani stopped all four shots for the shut out victory.

Statistics for Ballston Spa were not submitted.

Raheem Taylor scored and had two assists. Amanuel Mellace had a goal and an assist. Also scoring were Hack Rushton and Chris Rivas. Gavin Civitelli had an assist.

Max Hilderbran made two saves in net for RFA in the shut out. Andrew Stanley of HP made 10 saves.