Ward 1 Councilor Gary Reisman has left the Oneida Common Council and his replacement, Jim Szczerba, was sworn in at Tuesday’s meeting.

The Oneida Common Council meets for its regular meeting on Tuesday, July 19. Attending was newly sworn in Ward 1 Councilor Jim Szczerba, right. Szczerba has lived in Oneida for more than 30 years and hopes his business acumen will be of use to the council in days to come.
(Sentinel Photo by Charles Pritchard) 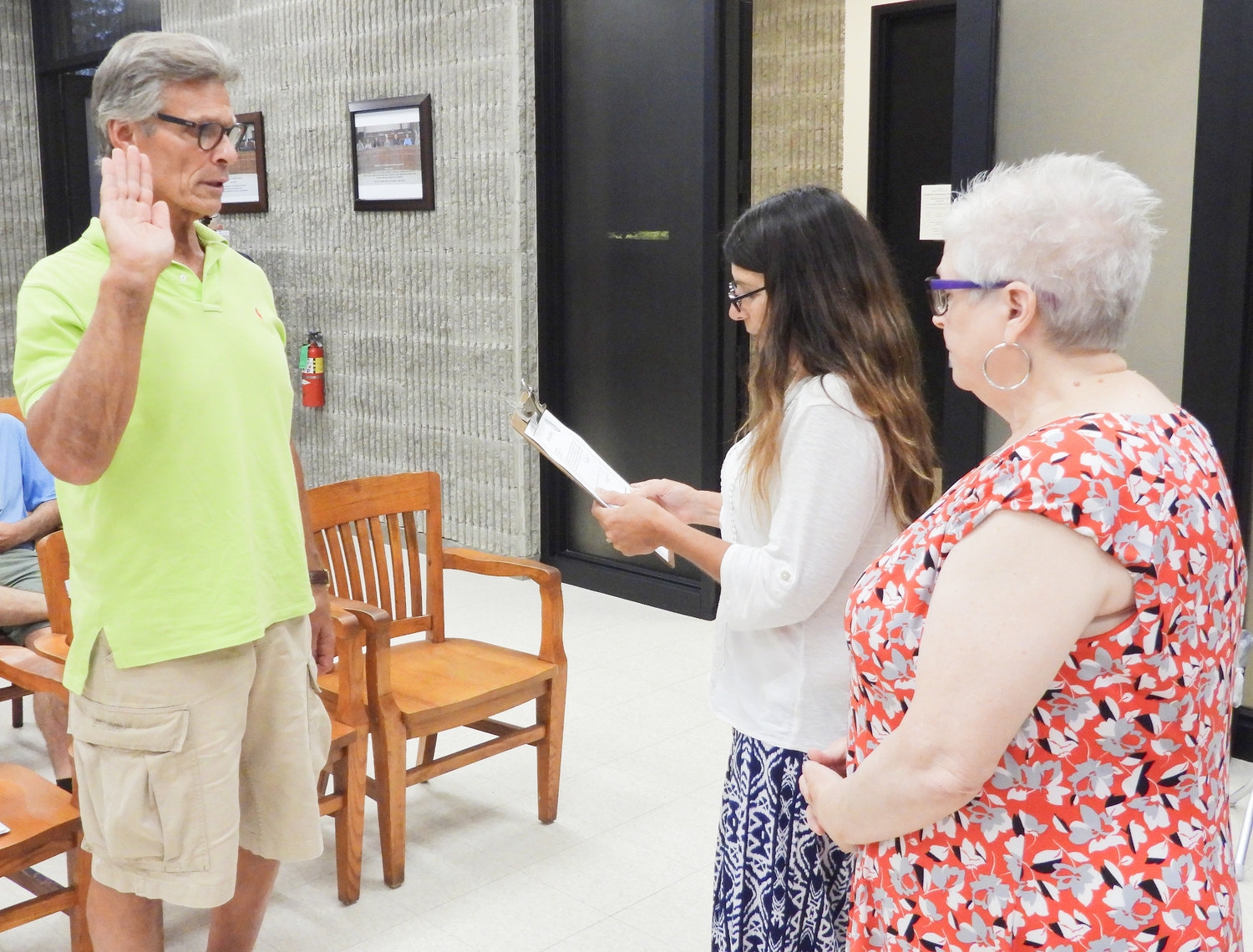 Jim Szczerba, left, is sworn in as the new Ward 1 councilor following the departure of Gary Reisman. Reisman sold his house and no longer lives in Ward 1 but still lives in Oneida, according to Mayor Helen Acker.
(Sentinel photo by Charles Pritchard) 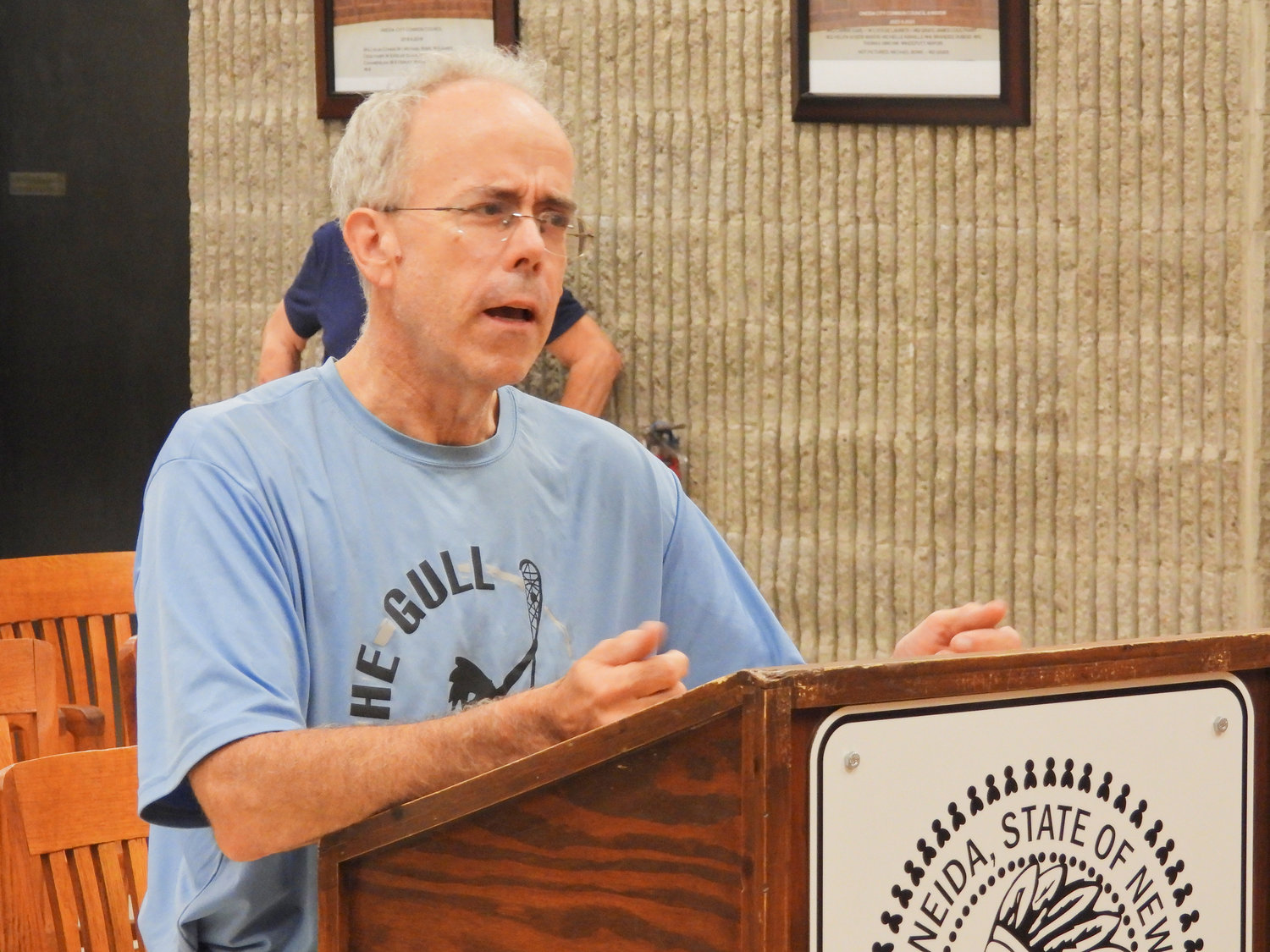 Oneida resident Ralph Kohler, a resident of Ward 1, speaks at Tuesday’s meeting and expressed displeasure at the council’s lack of communication to the city and its residents about the departure of Ward 1 Council Gary Reisman the days following his replacement.
(Sentinel photo by Charles Pritchard)
Previous Next
Posted Thursday, July 21, 2022 8:10 am
Charles Pritchard
Staff writer
email / twitter

ONEIDA — Ward 1 Councilor Gary Reisman has left the Oneida Common Council and his replacement, Jim Szczerba, was sworn in at Tuesday’s meeting.

The Daily Sentinel was informed by local residents that Reisman’s house was listed on Zillow and was sold early July — sometime after the July 5 Common Council meeting. The Daily Sentinel reached out to Reisman for comment, but no reply was given.

Before the regular agenda at Tuesday’s meeting, Szczerba was sworn in by City Clerk Sandy LaPera before he took his seat as Ward 1 councilor.

After the meeting Szczerba said he’s lived in Oneida since 1988 and owns “Attorney Recruiting Specialists” as a recruiting agency and works part-time for the New York State Office for People with Developmental Disabilities. When asked what he brings to the council table, Szczerba said he’s run multiple businesses, including a successful harness racing business. “I feel I bring some good business acumen and I’ve been living in the area for more than 30 years,” he said. “I’m hoping to help the people of Oneida and especially the first ward. And there are certain issue that I see where I live, especially the speed on our road, so there are things that need to be addressed that I can see first hand. And I’m sure I’m hear more from our ward.”

Szczerba said this is his first foray into local government. When asked what his first steps he’ll be taking to reach out to his new constituents, Szczerba encouraged people to reach out and call him at 315-813-4230. “I’m available any time, my number is out there,” he said. “If anyone has any problems, we’ll address them to the best of our abilities.”

This is the second time Reisman has made a sudden move in the city of Oneida. In 2019, Reisman ran for Ward 4 councilor, but announced his intent to move before the election. His name was still on the ballot and won, leading to Acker to appoint Michelle Ironside Kinville for Ward 4.

Oneida resident Ralph Kohler, a resident of Ward 1, expressed his displeasure at the lack of communication from the city on Reisman’s departure during the council’s public comment period.

“I thought it was surprising that there was no public announcement, as far as I know. Did I miss that? Or did Reisman just sell his house and the city said nothing?” He asked the council.

After the meeting, Mayor Helen Acker said Reisman has moved out of Ward 1 but still lives in Oneida. Acker said she didn’t learn about Reisman selling his house until after she came back from vacation in June and by then, she had contracted COVID-19 and would be out of commission for around three weeks as she recovered.

“And then Gary’s closing date got moved up two and a half weeks,” Acker said after the meeting. “It was really quick. And that’s when he gave me notice. It was a sudden change. I had to interview several people and had to make a decision.”

On top of all this, Acker said the city’s website has been down and “...We couldn’t put anything out there... We weren’t trying to hide anything.”