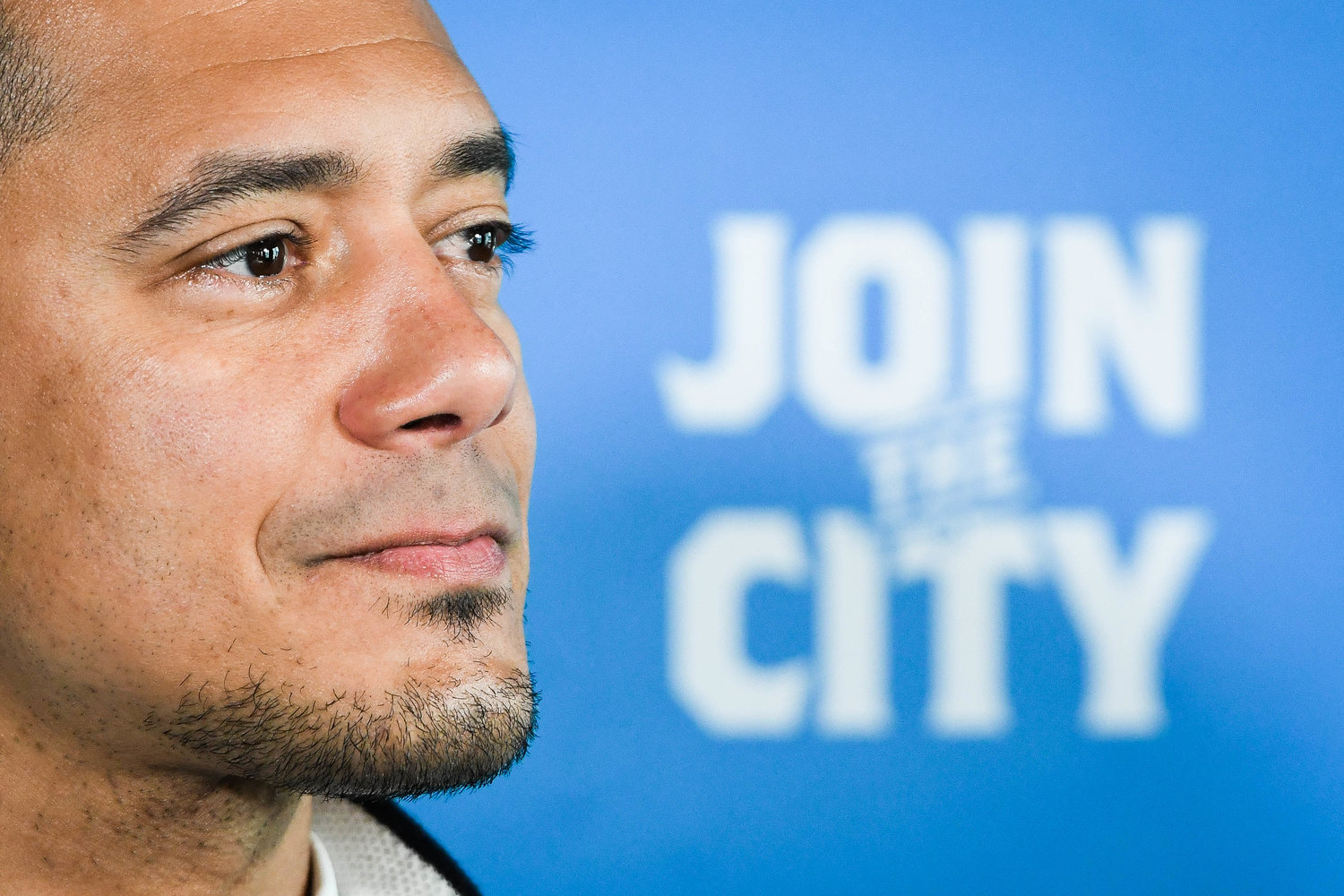 Hewerton Moreira is introduced as the new head coach for Utica City FC on Tuesday at the Adirondack Bank Center at the Utica Memorial Auditorium. Moreira's first name is pronounced "Everton" like the English Premier League team.
(Sentinel photo by Alex Cooper) 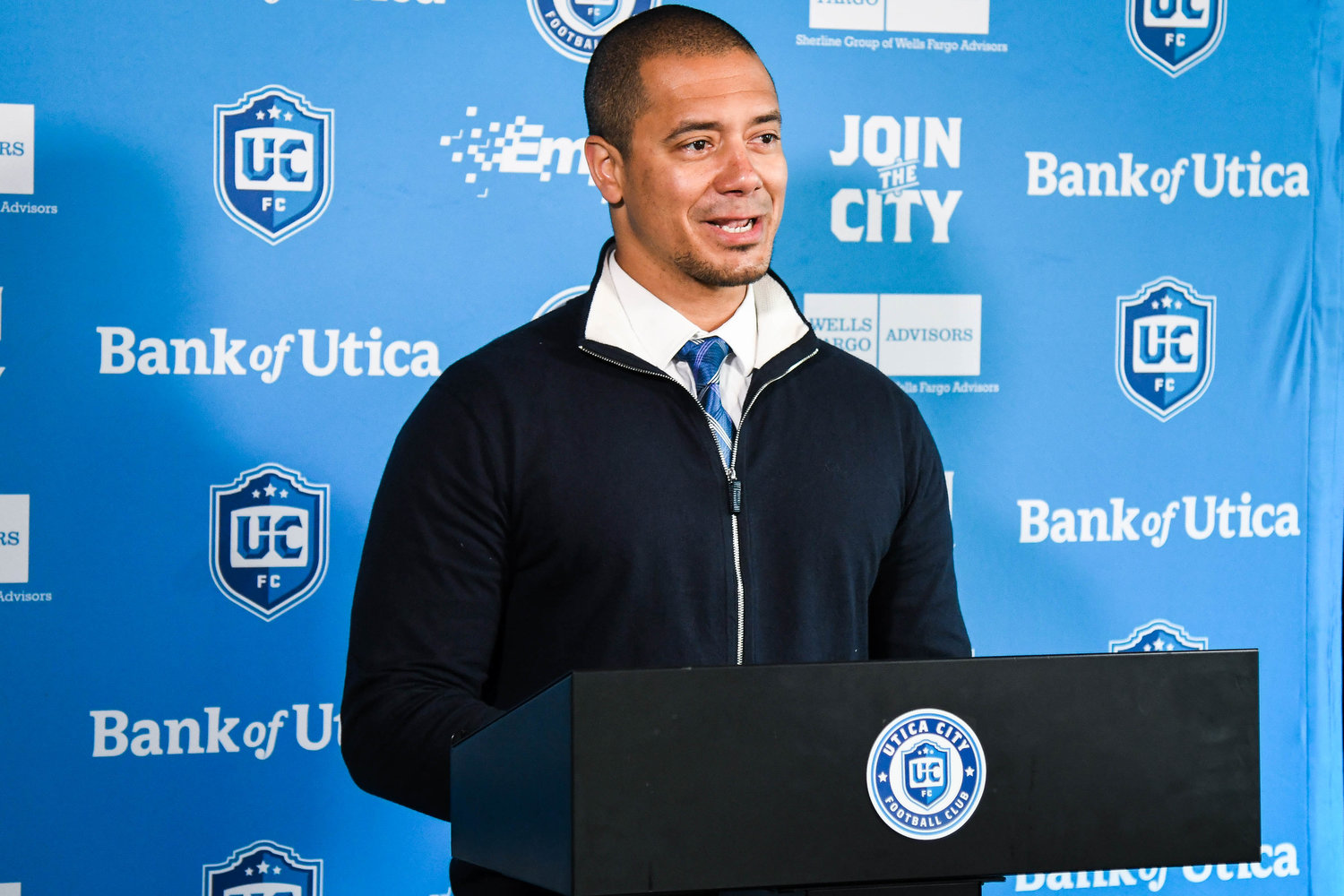 Hewerton Moreira is the second coach Utica City FC’s short history. Moreira played five games with Utica in 2022 and replaces Ryan Hall, whose contract was not renewed after being coach since the team moved from Syracuse in 2018.
(Sentinel photo by Alex Cooper)
Previous Next
Posted Tuesday, May 3, 2022 4:12 pm
Ben Birnell
Sports writer
email / twitter

The 42-year-old Brazilian and Major Arena Soccer League veteran played five games this year with Utica. The experience was his first on-field action in a few seasons after coaching in the MASL.

The experience was positive as he got to know players as well as General Manager Tommy Tanner and President Rob Esche, he said. He was impressed with the “professionalism” of the organization and the fan support, Moreira said.

The organization decided to the move on from Ryan Hall, announcing last week the team was not renewing his contract. Hall was Utica’s coach since the organization move from Syracuse in 2018.

“When Tommy approached me and started to speak to me about the (coaching) opportunity, to be here was an absolute no-brainer,” said Moreira, whose first name is pronounced “Everton” like the English Premier League team based in Liverpool. “You start to play in your head, ‘When am I going to start? What am I going to do? What can I do different? What can I continue to do from this past year?’ (The team) did a great job. They had a good team and players. It was a no-brainer for me to come here.”

Tanner confirmed that Moreira will no longer be a player and is “strictly” Utica’s coach. It is a “multi-year” contract, though Tanner didn’t provide a specific number.

Utica is coming off a tough season with an ever-changing lineup that finished 10-14 overall while missing out on a playoff appearance.

“At the end of the day, Hewerton’s knowledge and passion for the game was the right choice for our team going forward,” said Tanner, who noted he had a list of six coaches in mind for the position. “To me, he was the right fit. I look forward to working with him and building a championship team.”

Moreira, who coached the St. Louis Ambush from 2017 to 2021 and had a stint with Cedar Rapids, stated the desire Tuesday to bring MASL championships to Utica. In four seasons as St. Louis’ coach, Moreira had a 30-47-5 record.

There is a good foundation with Utica, he said. The biggest challenge will be building consistency, he said. It is possible players he’s familiar with from his past experience could join Utica’s roster. They also want to identify young talent as well.

There could be a shift in playing styles for Utica under Moreira. Recently, Utica was defense-first where Moreira is more offensive-minded. He was a standout forward during his 15 playing seasons.

“I try to have a little bit of everything,” said Moreira, who draws his style from the futsal game. “I like quality over quantity. I like to keep possession. … It is fast and efficient transitions. I want to defend as a unit. Offense wins games and defense wins championships. Everyone knows that. We have to be solid. We have to have an organized team and strong special teams.”

One thing Moreira is not: Quiet.

“I’m vocal and animated. I can’t be quiet. I have to help the team. Information needs to passed in certain ways for them to understand. It is not yelling. That doesn’t help anybody. Communicating helps people. I don’t believe in being quiet,” he said. “I believe that practice is my time to shine and games are players’ time to shine.”