They began with one boat and nearly four decades later, Hamilton College’s nationally-recognized varsity rowing program now has a place to call its own right at Bellamy Harbor Park in … 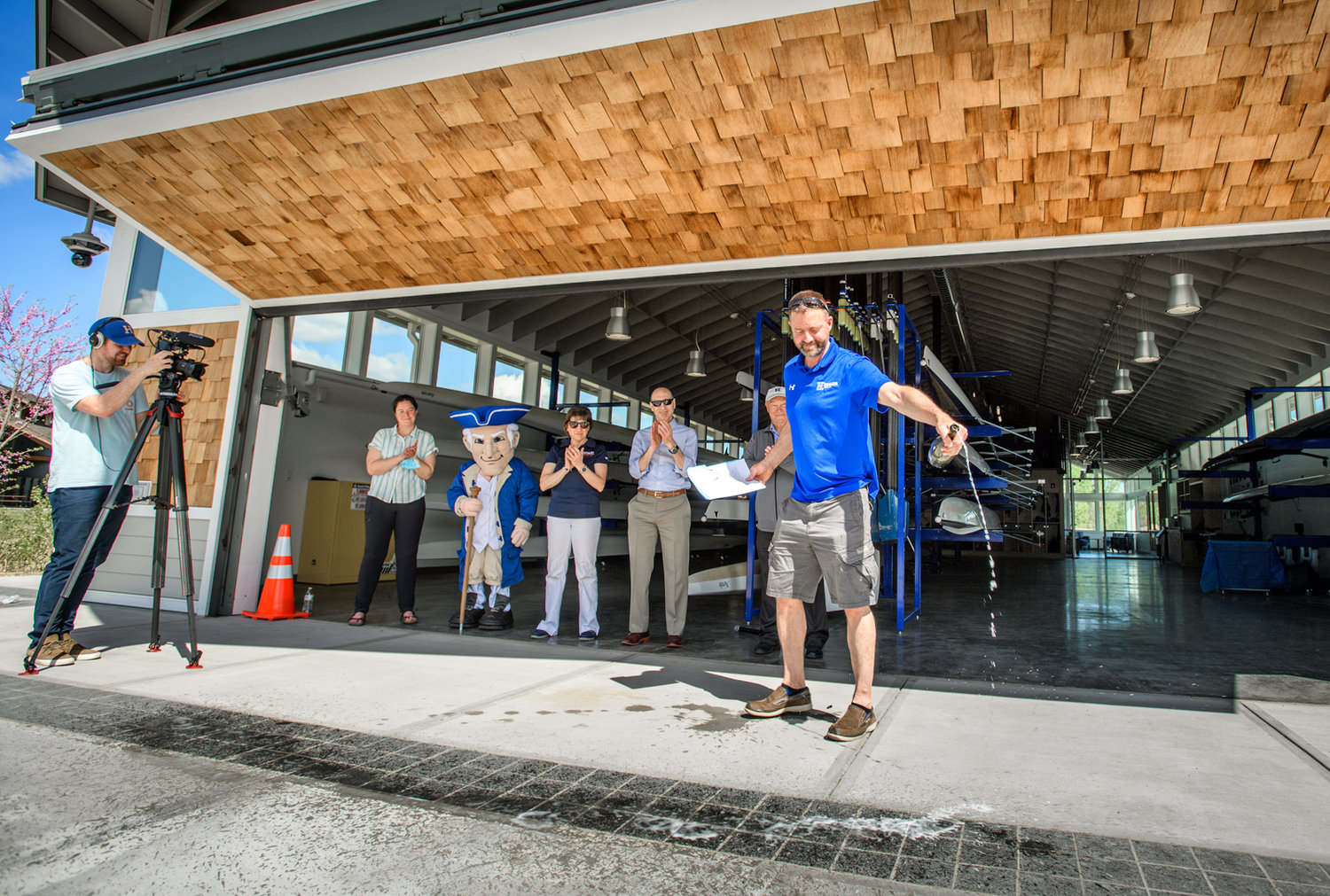 ROME — They began with one boat and nearly four decades later, Hamilton College’s nationally-recognized varsity rowing program now has a place to call its own right at Bellamy Harbor Park in Rome.

The Jason P. Andris Boathouse, located on the Erie Canal, was dedicated on May 14 with an energetic crowd of student-athletes, alumni, coaches, parents and Rome city officials on hand to celebrate the occasion.

The boathouse is named in memory of Jason Andris, Class of 1996, who gave his time and talents to the program as a coxswain, mentor, patron and student coach for the Continentals.

“Because we have a state-of-the-art program, we needed — and our rowers deserved — a state-of-the-art facility,” said President David Wippman. “Rowing is a team sport, and in some ways a team sport more than any other. If you’re not perfectly in sync and rowing together at the same time, at the same speed, and in the same direction, you’re not going anywhere. That team metaphor is appropriate for how we built this building. It took a team of people to make that happen.”

Hamilton Rowing has been powered by passion since its founding days as a club sport in 1983. Those first rowers turned into ardent alumni who garnered support for the program as it grew into a varsity sport and as both teams became national contenders.

In addition to numerous alumni, parents, and families who made gifts toward the new facility, the project’s lead donors included Stathis Andris P’96,’98, Stacy Andris Skalski ’98, and Jeff ’71 and Claudia Little P’04.

“We are here today because their determination, generosity and support helped us envision what could be possible with a boathouse here on the canal,” Wippman added.

The 4,770-square-foot boathouse is located on a redeveloped brownfield site at Bellamy Harbor Park and greets those entering the Copper City via the Mill Street bridge. It features the Class of 2022 Boat Bay, a space made possible by Hamilton rowing families, which can store up to 10 eight-person boats, 10 four-person boats, and oars.

The new space includes a team room, a coxswain’s electronic station, a coach’s office, bathrooms, and complete audio and visual services, including Wi-Fi. The team room is a new favorite spot for several rowers like Elizabeth Kantrowitz ’23, a member of the women’s varsity eight boat and the Continentals’ 2021 NCAA Championship runner-up squad. Kantrowitz said she loves that the room features photos of past team members and the program’s trophy wall.

“Having a space for the athletes to share emphasizes the team aspect of this sport. We row for each other, and the pictures and trophies remind us that this applies to current and past members,” Kantrowitz said. “It solidifies the legacy of Hamilton Rowing and ensures that we know we are upholding a program that past team members worked so hard to build. It makes me feel like I am rowing for something other than myself and that I am part of a really special program.”

Just beyond the structure is the Staging Terrace, which honors the 2021 women’s team and its runner-up finish at the 2021 NCAA National Championships. The new nearby floating docks add more buff and blue to the Erie Canal shoreline and are 212 feet long, end-to-end.

The boathouse is energy efficient, boasting plenty of natural light, and was built as an all-electric facility to support the college’s commitment to achieve carbon neutrality by 2030.

Athletics Director Jon Hind, Class of 1980, briefly described the difference between the program’s old rented facility on Muck Road and the new facility.

“We went from what I would call a garage to a home,” he said. “Rowing needed a home. I’m so glad and proud you now have that here.”

Men’s rower Sam Cagnetta ’23, who is preparing to compete with his teammates at the Intercollegiate Rowing Association National Championship Regatta in June, noted that the new boathouse comes with a competitive advantage.

“The boathouse rivals some of the best Division III schools out there in terms of facilities and appearance, which I think will attract top talent,” he said. “Its new location along the Erie Canal frees of ice much earlier in the spring than most other places, allowing us to get on the water earlier and better prepare for the season.”

Among the many positive outcomes of the new building is the college’s strengthened partnership with the City of Rome and its leadership, including Mayor Jacqueline M. Izzo, the city’s Common Council, Rome Industrial Development Corp., and Deputy Director of Community & Economic Development Matthew J. Andrews.

Men’s and Women’s Rowing Head Coach Jim Lister reiterated the significance of Hamilton Rowing being on such a “special body of water” in Rome, the birthplace of the canal. He concluded the dedication by christening the boathouse, inspired by the tradition of christening boats for good luck.

“Today, we gather to name this beautiful building the Jason P. Andris Boathouse,” Lister said after pouring champagne just beyond the entrance of the boat bay. “This building will provide a home for the Hamilton Rowing family of past, present, and future. We ask the waters of the canal to accept the name of Jason P. Andris Boathouse and to also help our boats be strong and swift. May many new rowers come through these doors, and may alumni return to share memories together.”