Ninth-graders got their first taste of high school Wednesday as Rome Free Academy welcomed their class for its first day of high school. 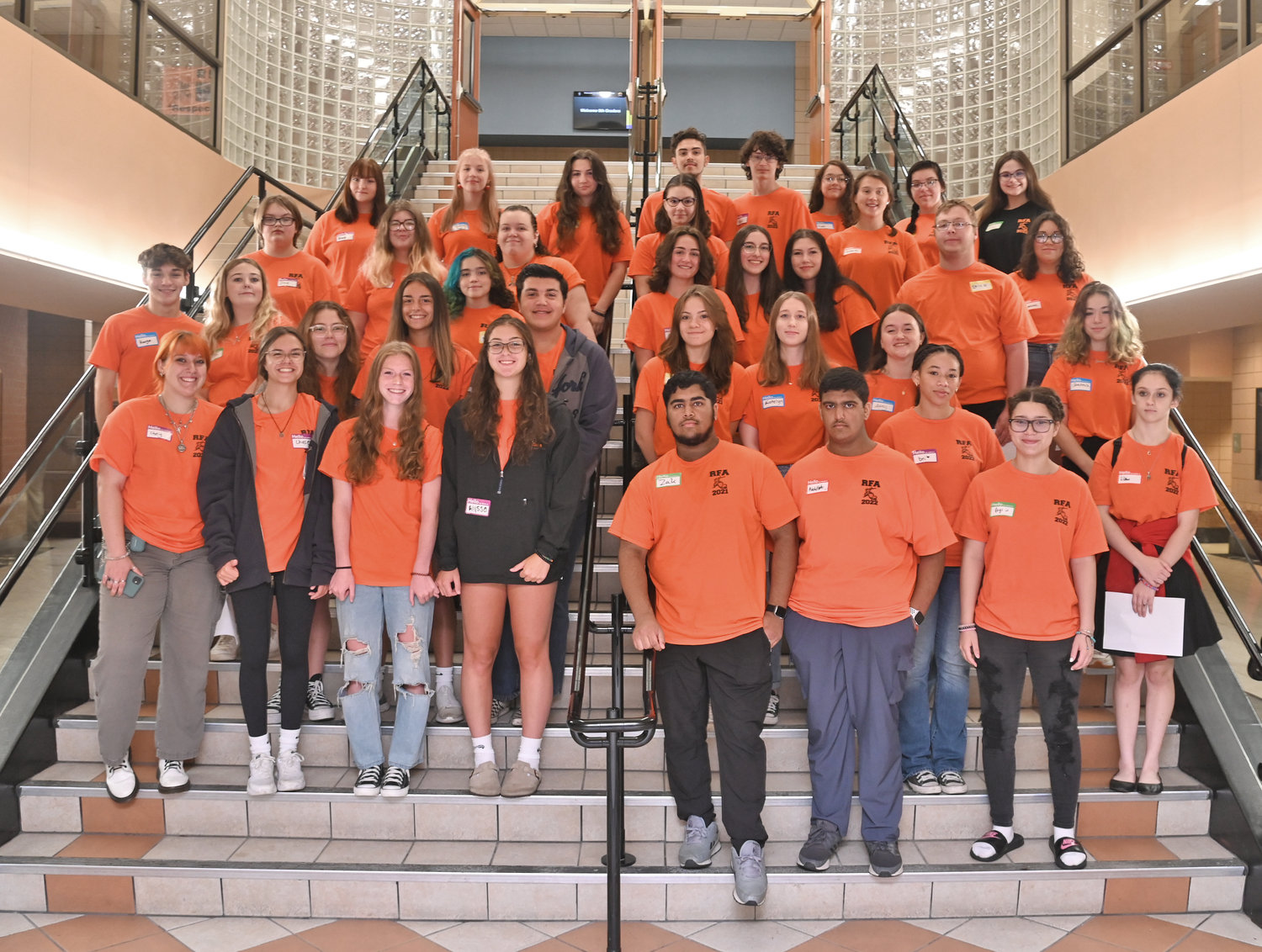 Members of the Rome Free Academy Knight Guides pose for a quick photo before dispersing to help get new students acclimated to the school on Wednesday.
(Sentinel photo by John Clifford) 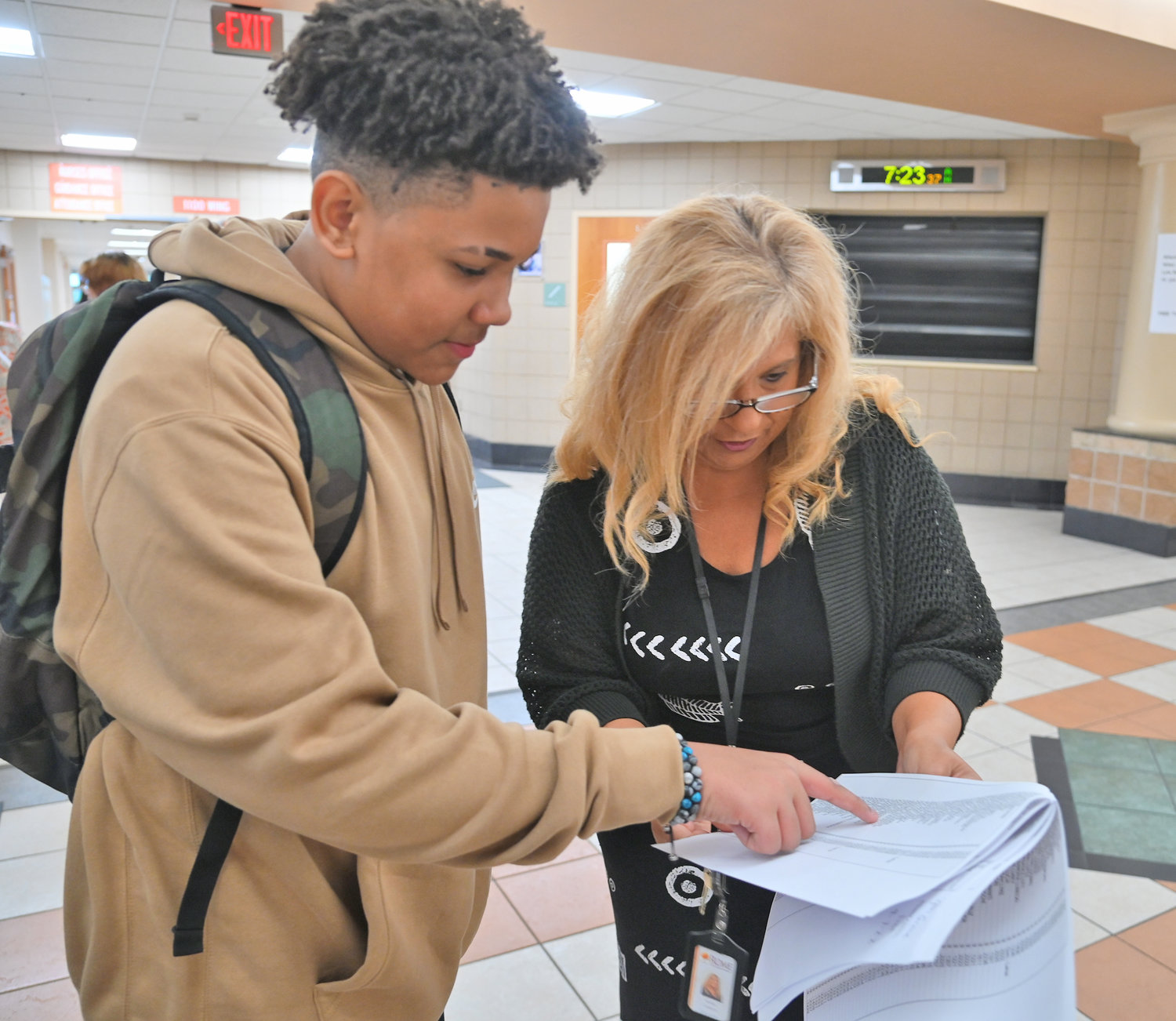 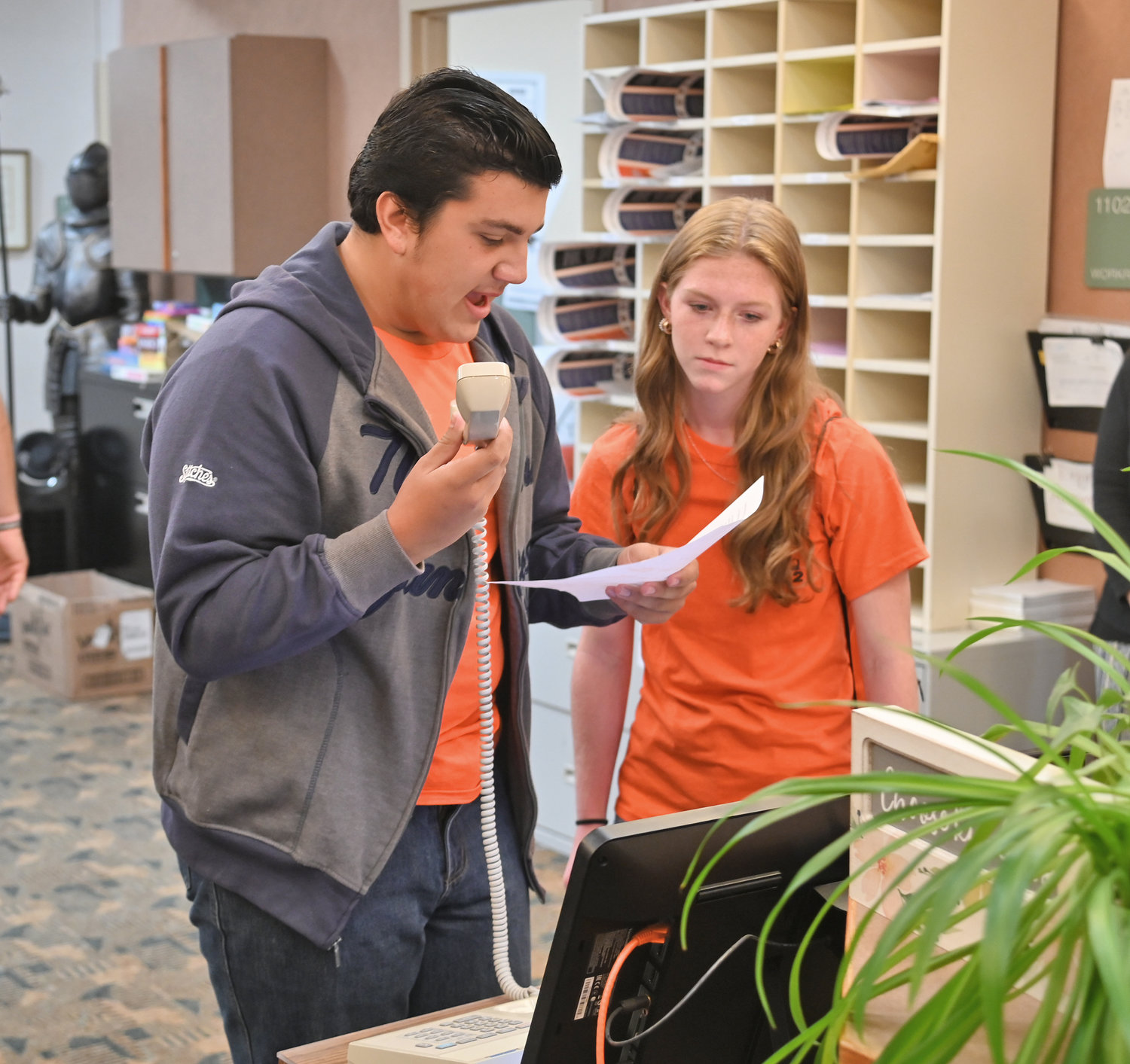 RFA Seniors Santino Campanaro and Brynn Furbeck make the morning announcements in the main office of the high school on Wednesday.
(Sentinel photo by John Clifford) 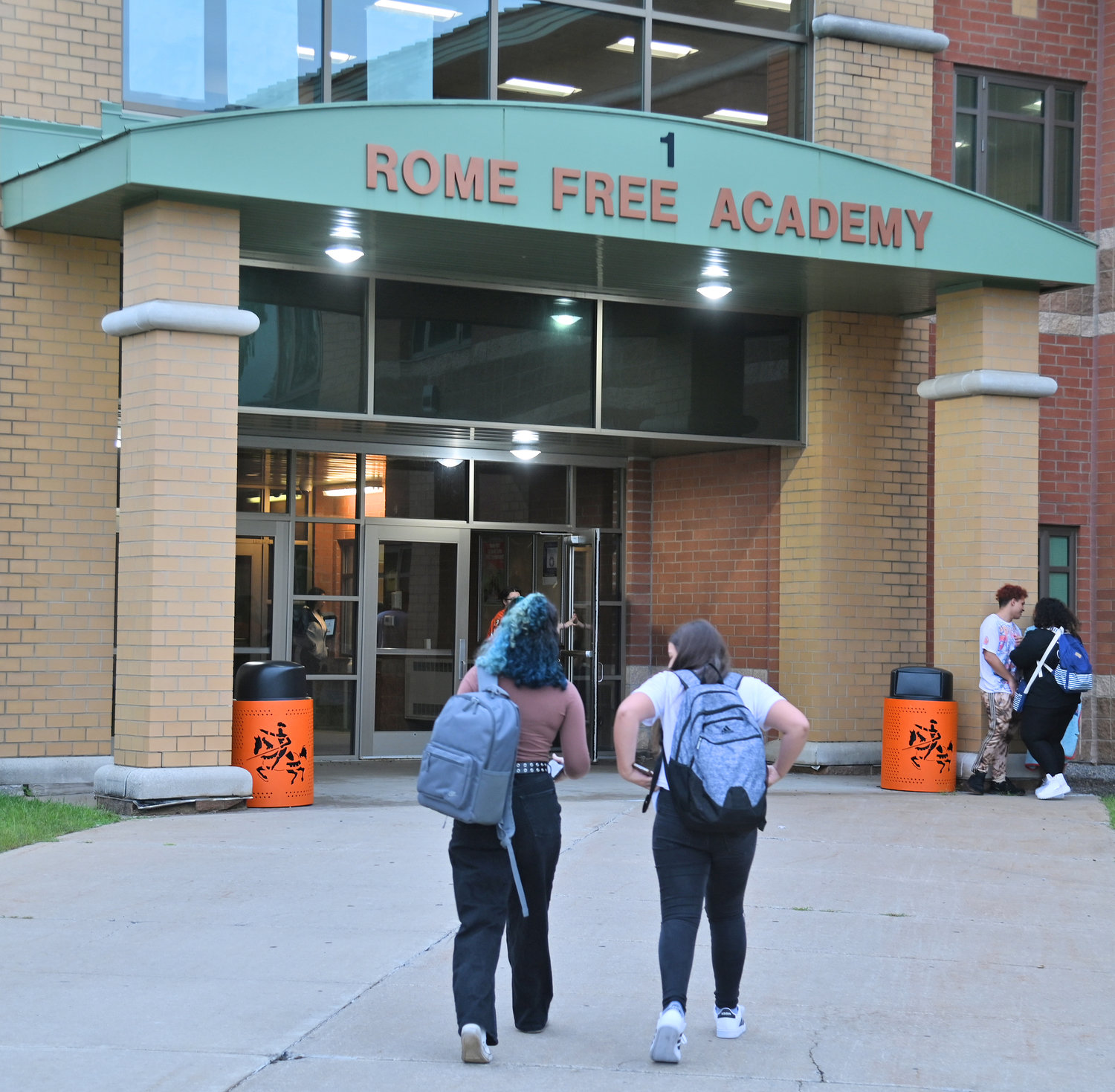 A pair of ninth-graders head toward the main entry into Rome Free Academy on Wednesday, Sept. 7, on their first day of classes for freshmen.
(Sentinel photo by John Clifford) 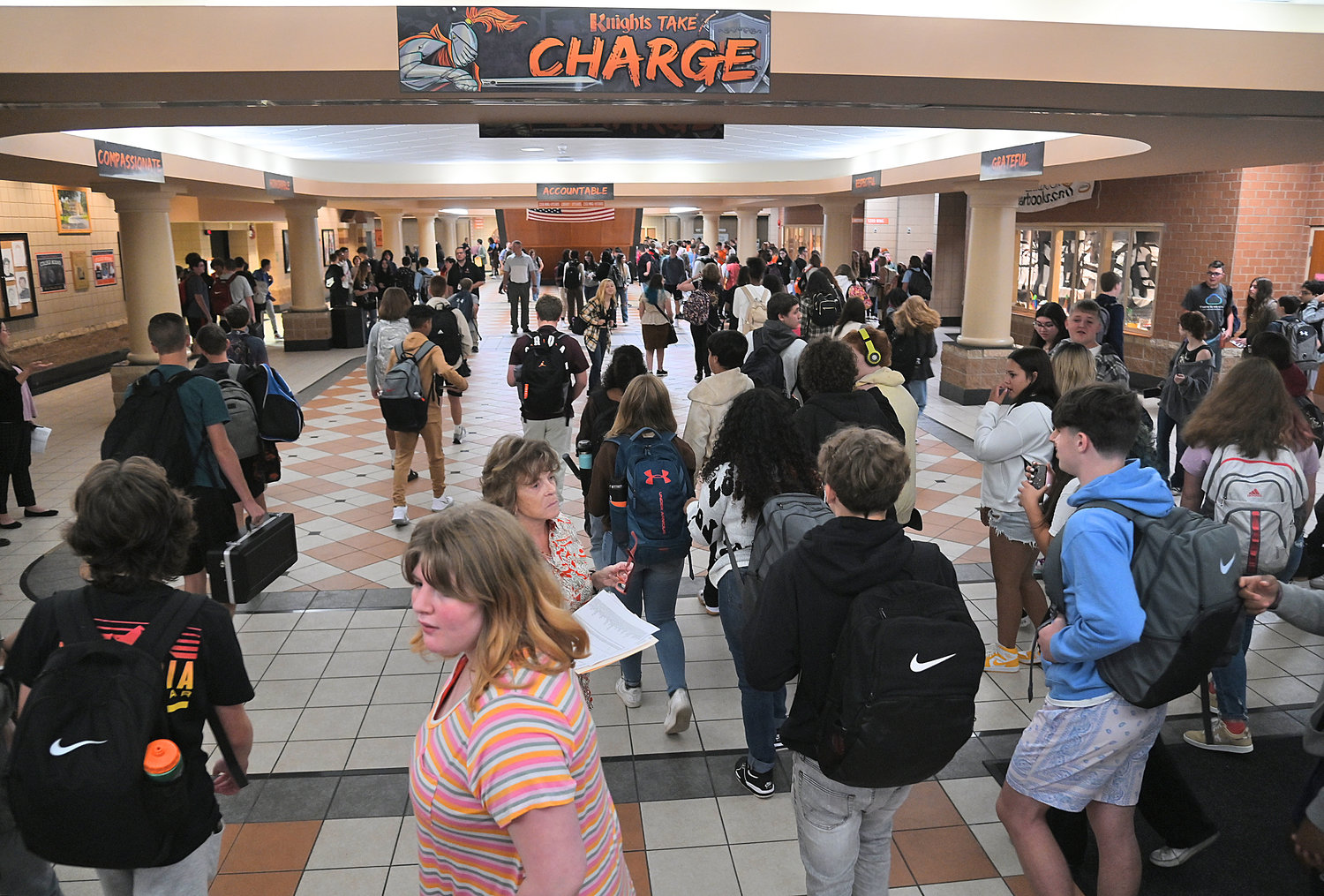 Members of the incoming freshman class headg off to their first period class with the sounding of the bell at Rome Free Academy on Wednesday.
(Sentinel photo by John Clifford)
Previous Next
Posted Thursday, September 8, 2022 10:10 am
Mike Jaquays
Staff writer
email

The 2022-2023 school year kicked off for those students a day earlier than their elder peers. Principal Brian LeBaron said this is a longtime tradition he started when he first arrived at RFA.

“It’s always just ninth-graders,” LeBaron explained. “This helps get the kids into their classrooms and get them settled. I think it’s a nice thing for the younger students.”

Ninth-graders Zephaniah Ricketts and Camren Smith both admitted they were a bit nervous on that first morning as they stood in the hallway seeking direction. But they were both looking forward to the school year, they agreed ... Ricketts said he especially enjoys math classes while Smith likes history. They both said they had fun summers, including trips to the New York State Fair.

Grades 10-12 start their own classes at RFA today. Strough Middle School seventh-graders also started Wednesday with the eighth-graders following the next day. All elementary school students in the Rome district started Wednesday.

But the ninth-graders were not the only students in the RFA building yesterday morning. In addition to school staff, there were also nearly 50 orange-shirted Knight Guides, a group made up of elder student leaders and named for their school mascot. They used their own experience at the school to guide the younger students wherever they needed to be.

School Counselor Shelley Skibitski said those upperclass students volunteered for the job and trained as Knight Guides in the spring. They previously helped with the eighth-grade visitation and ninth-grade orientation, she said, and then worked diligently to guide the ninth-graders on their first day of school.

“The idea of this group is to build community within the school,” Skibitski said of the Knight Guides. “I think it helps make every one of them feel more connected.”

Jaylyn Arruda and Keegan Hanrahan, both 11th-graders, were two of the guides. Arruda said they were there in case a student had trouble getting into a locker or if someone needed help finding a classroom.

She offered some advice to her younger peers.

“Try not to be nervous. Make new friends. Try not to get lost and don’t be afraid to ask for help if you need it,” Arruda implored the ninth-graders.

“I’m glad that we are able to be here to help them out,” Hanrahan added.

As Skibitski looked over the empty hallways near the front lobby at the 7:30 a.m. start of classes, hallways that had only 15 minutes earlier been packed with students trying to find their way, she said the guides and all of the staff’s prior preparations obviously worked in helping the ninth-graders along.

“I think this just went wonderfully,” Skibitski said. “This has been one of our best opening days.”

LeBaron agreed they were well-prepared for opening day. He also said he is now looking forward to the rest of the school year with these new students and their returning peers.

“I anticipate this to be one of our best school years,” LeBaron assessed. “I am super excited about it. We love having the kids back; that’s why we do this — it’s all about the kids. Every fall is a new beginning for them.”