In celebration of its fifth anniversary, the Connected Community Schools team welcomed the National Education Union from Great Britain for a special tour and workshop at Little Falls … 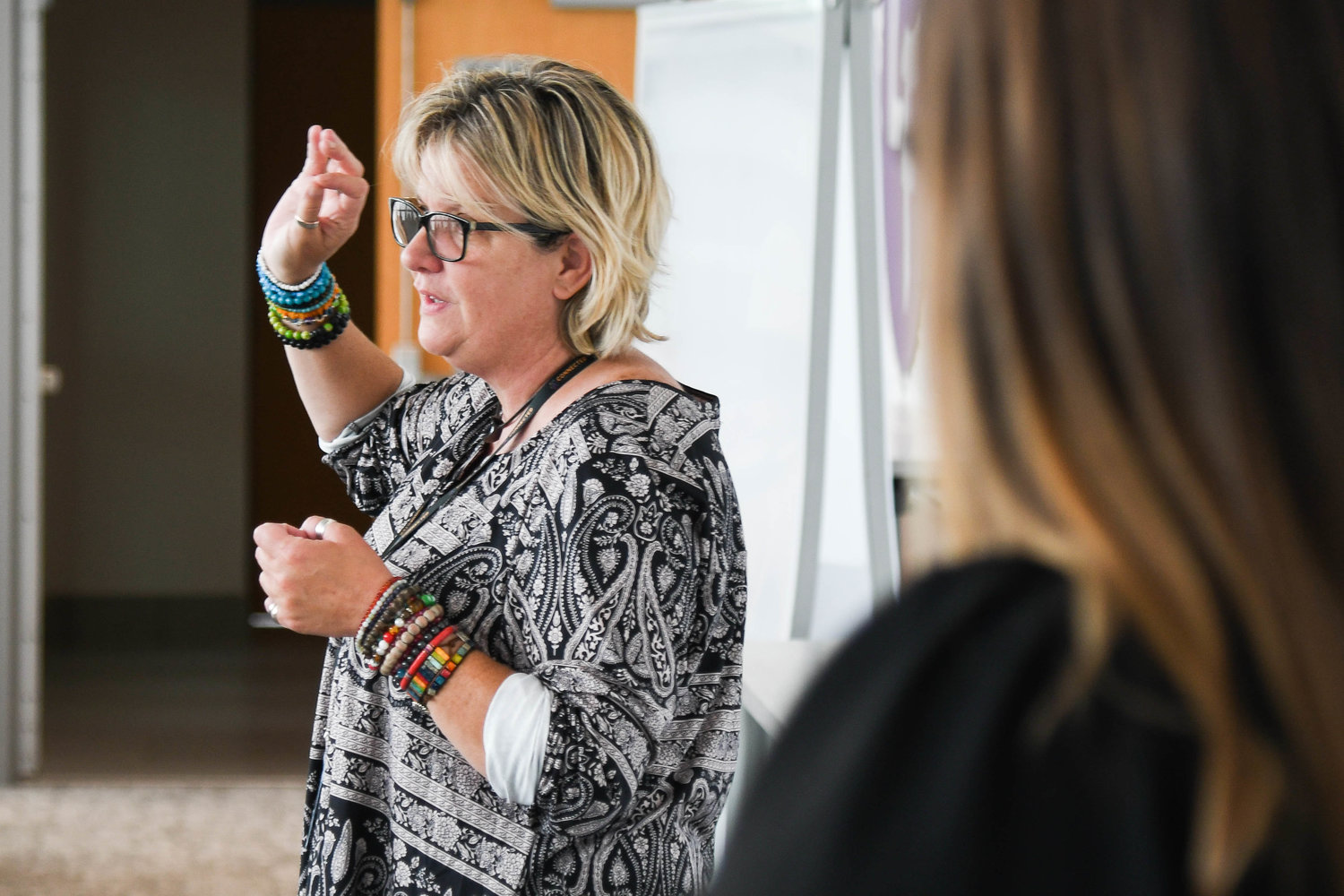 Melissa Roys, executive director with Connected Community Schools, welcomes the National Education Union from England on Tuesday, August 16th 2022 at the Little Falls City School District. The National Education Union is interested in learning about the inner workings of the Connected Community Schools Initiative and how they have been successful in expanding an impactful model into 14 school districts, 58 school buildings, serving over 25,000 students and ensuring that individuals' basic needs
(Sentinel photo by Alex Cooper)
Posted Thursday, August 18, 2022 9:50 am
Nicole A. Hawley
Staff writer
email / twitter

LITTLE FALLS — In celebration of its fifth anniversary, the Connected Community Schools team welcomed the National Education Union from Great Britain for a special tour and workshop at Little Falls Middle/High School Tuesday.

Representatives of the National Education Union in the UK were interested in learning about the makeup and “inner workings” of the Connected Community Schools initiative and how it’s been successful in expanding its model, said Executive Directors Melissa Roys and Danielle Martin.

As the saying goes, “it takes a village,” and similarly, Connected Community Schools has brought together the entire community, including agencies, services, organizations, businesses, places of worship, individuals, teachers, administrators, union members and leaders, investors and other people with the same mission of helping students “become successful, productive and engaged healthy citizens.”

Martin said the team of 11 representing the National Education Union arrived at Little Falls Middle/High School Tuesday morning, led by NEU Joint General Secretary Mary Bousted. The NEU not only represents the UK but all of Europe.

“When they arrived, we gave tours of the Little Falls school, and they toured through our Hub, so they could get a look at how that impacts students and their families,” Martin explained.

The Connected Community Schools team helps with everything from food and clothing, to dental and medical needs for students. Each school has a Hub staffed with a CCS liaison that provides students and families with no-cost essentials such as food items, hygiene needs and even school supplies.

During the presentation for NEU representatives, “One student spoke about the Hub and what a difference it made for him having that resource available,” said Martin. “He said the Hub helped give him a sense of ‘belonging’ in school, and a sense of belonging for his family. He said he brought clothes home from the Hub, and was especially proud of his Adidas sweatshirt. He also brought clothes home to his mom and that she was so happy, that the relationship between the two of them has been better.”

Roys said they also gave a physical tour of the CCS van and talked about the organization’s delivery infrastructure.

“We talked about how our delivery infrastructure has been built and how successful we’ve been in delivering supplies from our central Hub in Rome, and how we’re going out to all our connected school districts,” Roys said. “Then we watched a video presentation on how we’re now celebrating five years” in service.

The visit was made possible when members of the American Federation of Teachers recommended that the NEU come visit the Mohawk Valley and actually see the Connected Community Schools model in-person, Martin explained.

“They were a phenomenal group to work with and they were so open to learning about what we do,” Martin said. “We had NEU staff and teachers from Europe share their struggles and challenges they’ve had. One talked about how high the poverty level is around her schools and the need to have a model like Connected Community Schools to help support families.”

She said, “We’ve already had some start following us on social media, and we also exchanged contact information. The opportunities are endless for us to help support them.”

“They want students to be talking to each other pen pal style,” she said. “The more connected we are, the more our resources will grow and we’ll become even stronger.”

Next stop for the NEU group was Los Angeles, with their plane taking off Wednesday morning.

“The day was humbling — to have conversations with someone as far away as they are about the same struggles they’re having, and to have proactive conversations about solutions,” Martin said. “It’s a sense of feeling honored. We don’t celebrate our successes enough … to hear our community representatives talk about our initiative was just enlightening in and of itself. We were told that, ‘the passion that comes from both of you when you’re speaking about your mission is just inspiring,’ and we couldn’t be more proud. It took a lot of work to get here, but it’s worth it.”

A colorful banner is being created for the school to hang in recognition of the program, according to the letter. A special presentation ceremony will be planned in the near future.