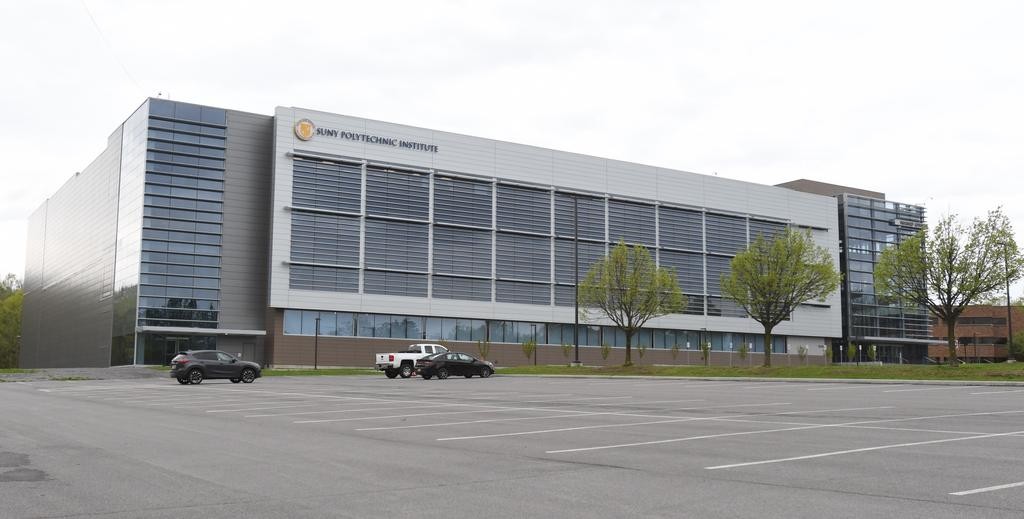 GEARING UP — Work is progressing on the establishment of the New York Power Electronics Manufacturing Consortium in the Quad-C building on the SUNY Polytechnic Institute campus in Marcy. Danfoss Power Silicon has signed a lease to fully occupy the 202,000-square foot building, whose formal name is the Computer Chip Commercialization Center. (Sentinel photo by John Clifford)
Posted Tuesday, May 2, 2017 4:00 pm
DAN GUZEWICH, Staff writer

The company, based in Germany, is in the preliminary stages of scaling up inside the Quad-C so it can start commercial production in the first quarter of next year, according to site general manager Michael Hennessey.

“With a little luck and a lot of hard work, that’s our plan,” he said of the timetable.

Anticipating the facility, as it ramps up, will attract a number of customers, employment is projected to be 300 by year five. It is also expected that Danfoss will attract other businesses to the area and use existing ones to support its ongoing operations.

It was announced in March Danfoss will occupy the full Quad-C in conjunction with the establishment of the New York Power Electronics Manufacturing Consortium Packaging Center. Danfoss will package silicon-carbide chips into modules and higher-level assemblies to power electronic devices. These chips are used in machines such as wind turbines and electric vehicles. There also are aerospace, industrial data center, electrical power grid, including solar, and medical imaging system applications.

“We’re looking to aggressively grow in the U.S. market,” said the company official, who has previous experience in setting up manufacturing facilities.

But there’s a lot of work to be done before production begins.

He’s currently working on tooling orders and setting up packaging lines. Office and support space has to be finalized and cleanrooms completed. Also, some of the utilities need to be modified to optimize the operation’s efficiency.

The state is investing $100 million toward the retrofit of the Quad-C facility and the purchase, installation and qualification of the equipment necessary to undertake the packaging center operation. The state is leasing the 201,907-square-foot facility and purchased equipment to Danfoss.

New York has already invested about $125 million in the construction of the facility.

Under the 15-year lease, Danfoss will pay $150,000 in the first year with 3 percent annual increases, according to documents. There are provisions to extend the agreement for an additional 10 years.

Also, Danfoss will pay all costs associated with the building such as insurance, maintenance and utilities. This includes all heating, ventilation and air conditioning, telephone service, security and janitorial services, interior and exterior building maintenance, and grounds maintenance.

General Electric, which pioneered the silicon-carbide technology, will, inside the Danfoss facility, set up a dicing operation to remove the chips from silicon-carbide wafers manufactured in Albany. Danfoss will then produce modules and power blocks that house the chips.

Silicon-carbide modules and power blocks can handle higher frequencies and temperatures than silicon, allowing for cheaper and smaller filtering and cooling systems.

“People are very keen on this and they’re very welcoming,” Hennessey said of the local reception Danfoss has received since the March 24 announcement.

The lease requires Danfoss to use “commercially reasonable efforts’’ to employ at least 300 workers at Quad-C within five years.

“I think we’re going to get a mix,” said Hennessey when asked if the employees would be local residents or drawn from outside the area. “Our intention is to hire locally, both white collar and blue collar.”

Danfoss Silicon Power is a unit of the Denmark-based Danfoss Group, which has facilities around the world.