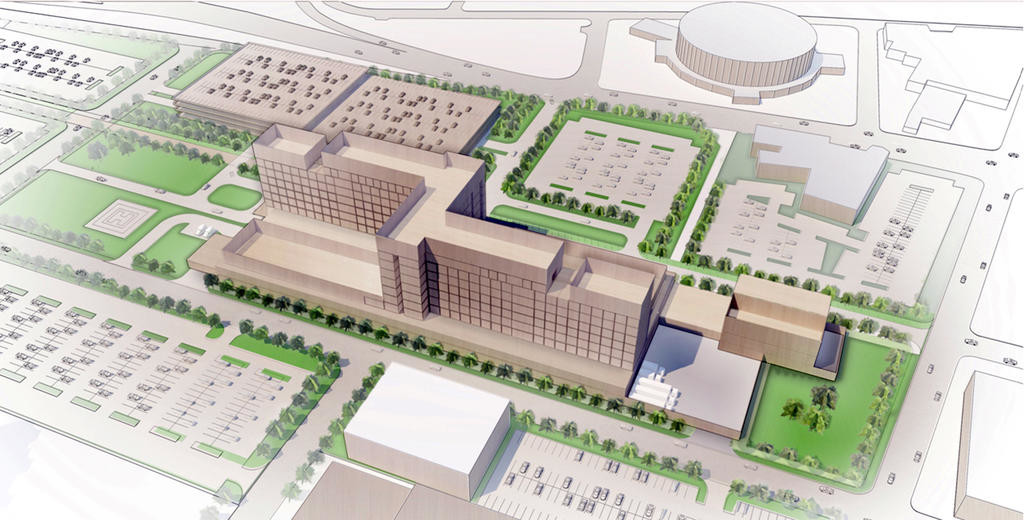 SITE PLAN — The Mohawk Valley Health System unveiled a site plan for its new Utica hospital in November. The design calls for a multistory, 672,000-square-foot facility with 373 beds and an adjacent parking garage. It would be located on 25 acres along Lafayette, Columbia, Cornelia and State streets in Oneida County’s largest city. The complex would replace two inpatient campuses, Faxton St. Luke’s Healthcare and St. Elizabeth Medical Center. Completion is anticipated in 2022. In the background is the Utica Memorial Auditorium. 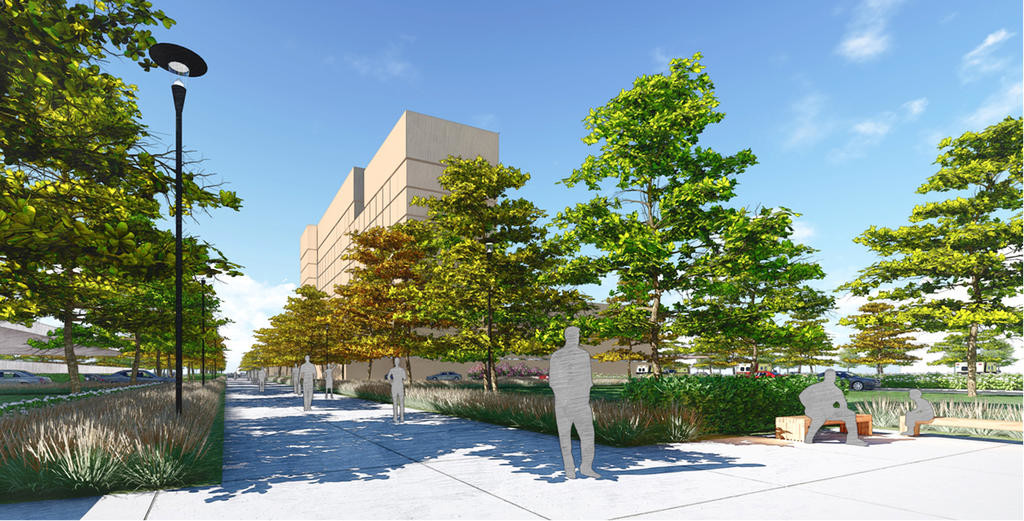 Looking AHEAD — A landscaped urban campus with open spaces is part of the plan for the downtown Utica hospital project. The facility’s design will consider the city’s architectural character, surrounding neighborhoods and urban development initiatives. (Illustrations submitted)
Previous Next
Posted Friday, March 16, 2018 4:00 pm

Hammes Company, a national firm focusing on healthcare building strategies, and the Mohawk Valley Health System (MVHS) report that they are making progress on a new, regional healthcare campus in downtown Utica.

MVHS selected Hammes Company as the project manager in January 2017 for its new $480 million hospital, which is to be one of only three new hospitals built in New York State in more than 20 years. In this role, Hammes Company is assisting MVHS with the building strategy, programming, budgeting, scheduling, land acquisition and overseeing the project through occupancy.

In collaboration with Hammes Company is the architectural firm NBBJ and Turner Construction Company. MVHS and members of the design team have been working closely together since May advancing the site plan and design, officials said. Late last year, Hammes Company led teams of medical staff, nurses, support staff and executives from the MVHS on a tour of healthcare facilities that enhanced patient experience through technology and space usage.

“We value the team collaboration and partnership with Mohawk Valley Health System,” says Nancy K. Connolly, senior vice president at Hammes Company. “Hammes Company is excited to be part of this transformational project with MVHS. The MVHS system is committed to the local and regional communities they serve and that commitment is paramount in this process. We are honored to deliver the vision of the doctors, community and healthcare leadership, and to serve the healthcare needs of this region for many decades to come.”

MVHS submitted a Certificate of Need (CON) application in November 2017, which required 30 percent of the hospital design be complete. The design process will continue through October 2018, officials said.

The MVHS was awarded a $300 million Health Care Facility Transformation grant in April 2017 from the New York State Department of Health to create an integrated healthcare delivery system in Oneida County. Construction is slated to begin in early 2019, officials said. Upon completion in 2022, the new healthcare campus will continue the rebirth of downtown Utica by drawing several thousand healthcare workers every day to a thriving health district, according to the MVHS announcement.

The new hospital will offer inpatient and outpatient care, emergency services, imaging, surgery, obstetrics, and psychiatric care, among other services.