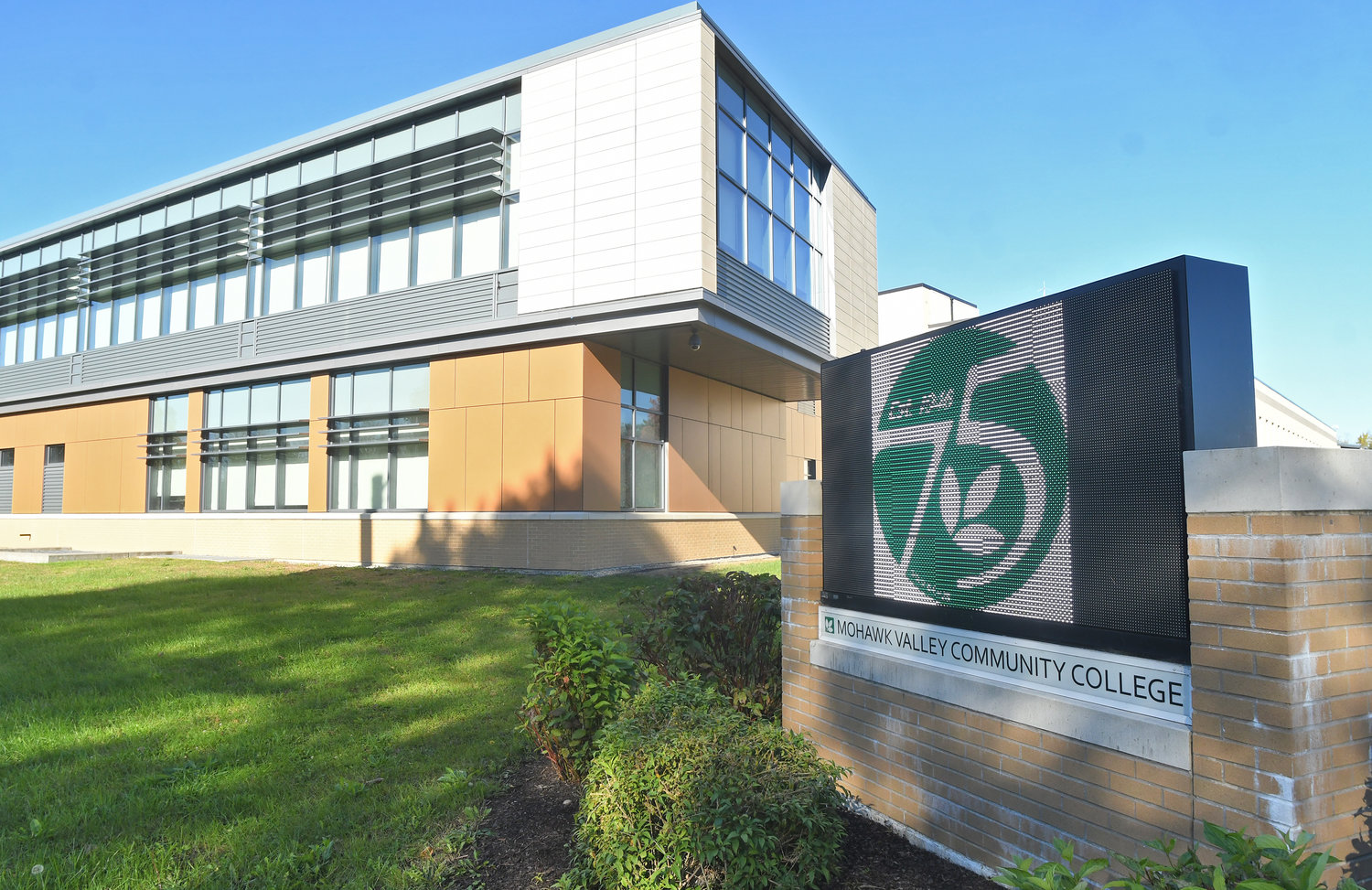 75 AND COUNTING — The Rome Campus of Mohawk Valley Community College is shown on Friday with the college’s electronic sign proudly showing MVCC’s 75th anniversary logo to all who pass by at the corner of Floyd Avenue and Bell Road.
(Sentinel photo by John Clifford) 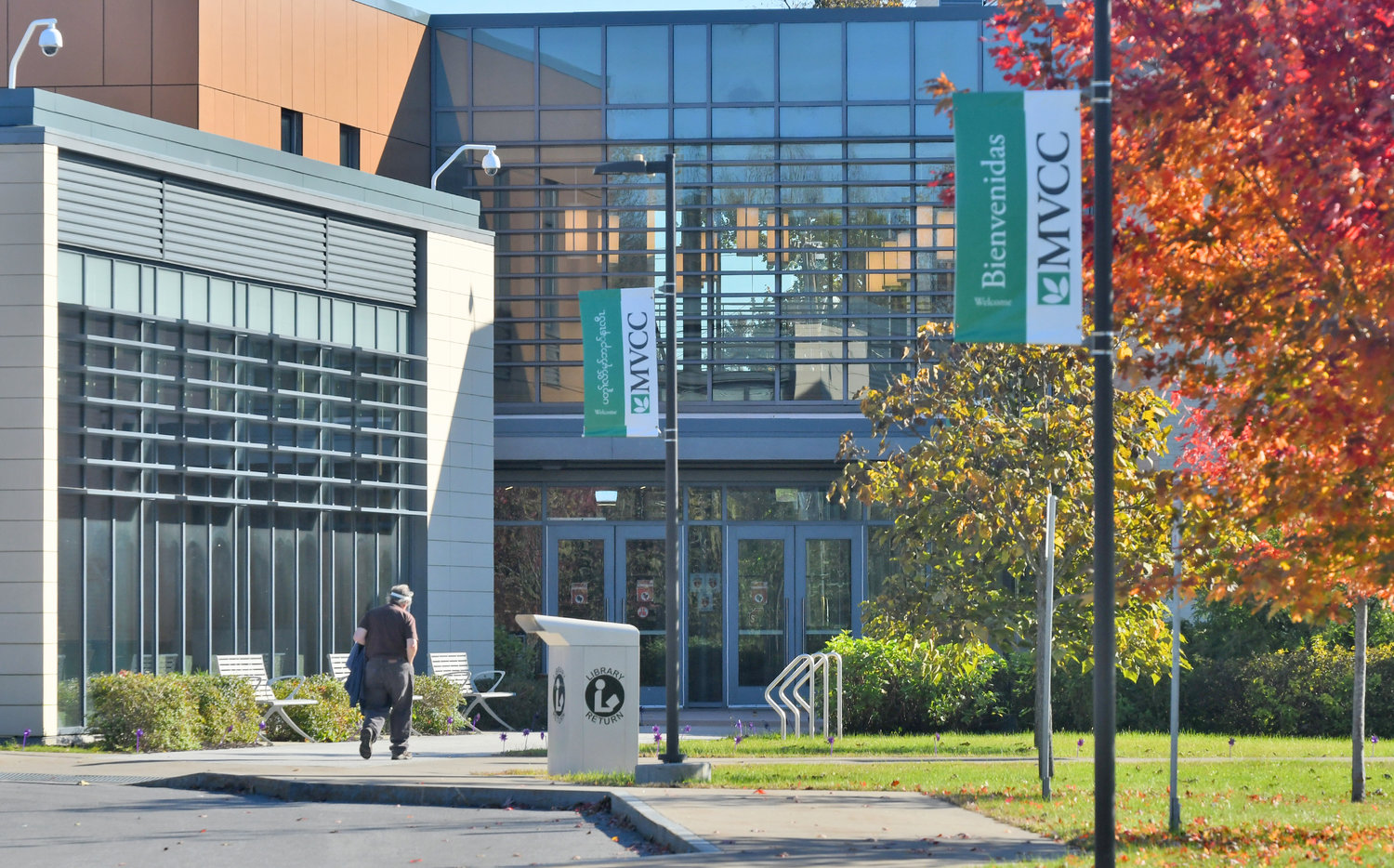 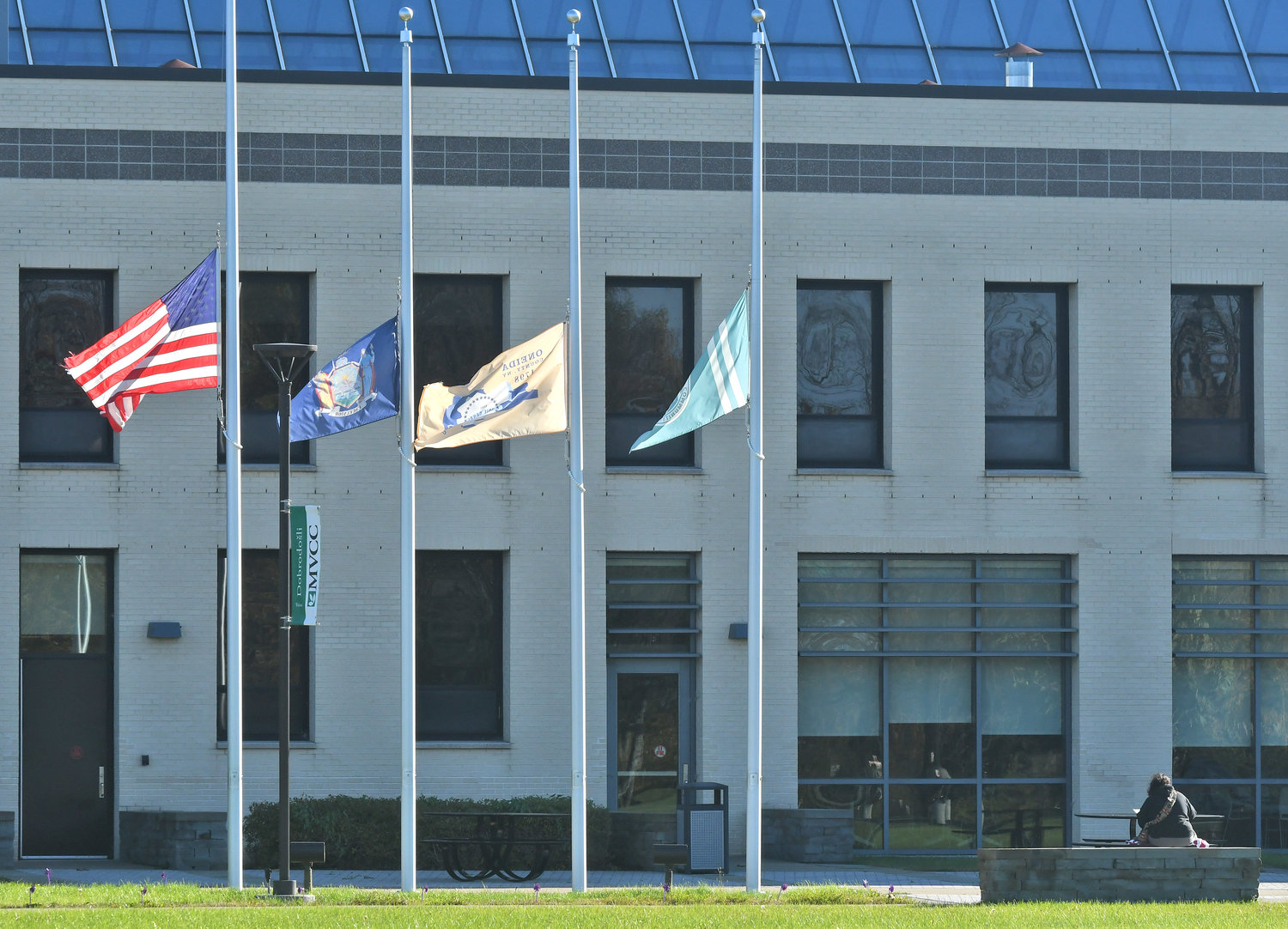 Flags at MVCC campus with a student sitting at a nearby table.
(Sentinel photo by John Clifford) 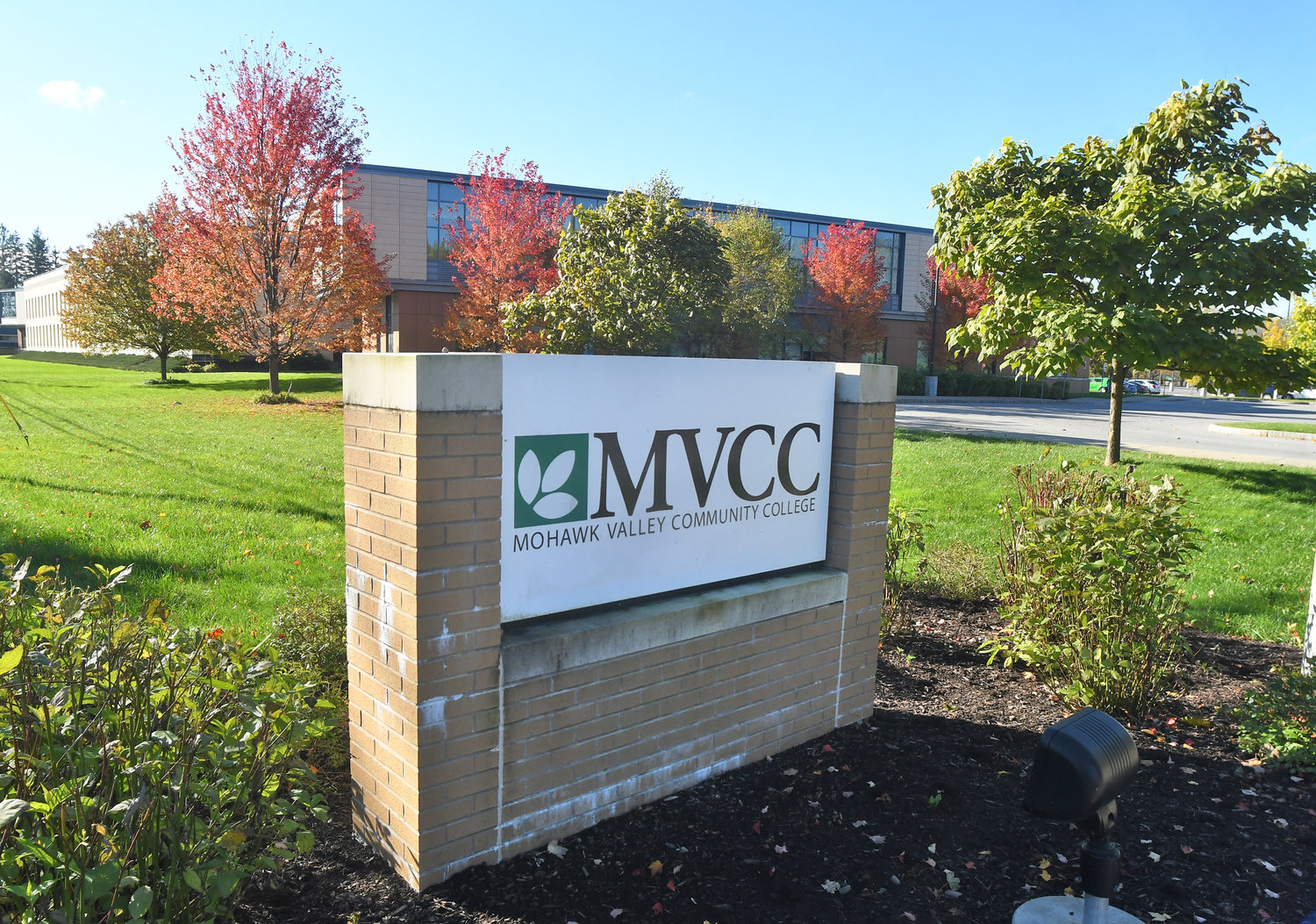 MVCC opened in October 1946 as the New York State Institute of Applied Arts & Sciences in Utica, one of five post-secondary institutions established to train and educate veterans returning from World War II. Then located in the Country Day School on Genesee Street in New Hartford (the present site of the Wedgewood Apartments), the Institute had its first day of classes on Oct. 15, 1946, with 11 faculty members and 53 students — all enrolled in retail business management.

Since its early days, MVCC officials say the college has built and adapted its programs to fit the needs of area industries, helping to develop the regional workforce and allowing students to have a significant and immediate impact on the Mohawk Valley. As regional industry continued to evolve, so did the college’s instructional programs, which required new facilities for a growing student body and eventually a name change to Mohawk Valley Community College in 1963.

The Utica Campus on Sherman Drive opened in 1960, and the present Rome Campus opened in 1974 in a portion of the former Oneida County Hospital on Floyd Avenue.

Both campuses, officials say, have seen tremendous growth, including extensive renovations and new facilities to provide state-of-the-art learning spaces for a vast array of programs that include everything from fine arts and hospitality to healthcare, business, and STEM.

MVCC has evolved to become New York State’s first community college, the largest college between Syracuse and Albany, and the region’s primary provider of college education and non-credit training. Throughout its 75th year, MVCC will highlight its growth and impact and recognize the service and contributions of its alumni, faculty, and staff, with some exciting events and activities.

“The pandemic hasn’t limited our creativity in celebrating 75 years of MVCC serving the residents and employers in the region to help foster community, growth, and prosperity in Oneida County,” MVCC President Dr. Randall J. VanWagoner said.

The college’s 75th anniversary plans include:

MVCC Time Capsule: Put together by MVCC’s Institutional Advancement Office, the time capsule will be on display at MVCC’s Utica Campus until it is opened in October 2046 for the College’s 100th anniversary;

Commemorative Plaque Dedication: A commemorative plaque will be placed in the Main Quad at MVCC’s Utica Campus;

Hall of Fame Induction Ceremony:  This year, seven new members were inducted into the MVCC Hall of Fame at a ceremony on Thursday, bringing the total number of inductees to 75;

75 Interviews: VanWagoner has recorded 75 interviews with MVCC employees and retirees sharing their insights on the College’s history and role in the community;

75th Anniversary Webpage: A new page on the college website — https://www2.mvcc.edu/75/ — will highlight 75 years of MVCC’s growth and impact while celebrating 75 years of student success. It will include an illustrated timeline of the College’s history, alumni profiles, and the 75 interviews mentioned above;

Student Selfie Contest: MVCC students are invited to take selfies with the 75th anniversary logo. Those who text photos to 315-847-3866 will be entered into a raffle for an MVCC anniversary-themed gift basket, and the photos will be posted online;

Alumni Essay Contest: The community is invited to express how MVCC has impacted or influenced their life by sharing memories, images, media, and memorabilia. The collected remembrances may be added to the college’s historical archives, and used for videos, on the website, or on social media. Those who share their MVCC story by completing this form, https://www.surveymonkey.com/r/mvccstory, will be entered to win an MVCC anniversary-themed gift basket;

75th Anniversary Commemorative Items: Apparel and related items were designed to include the 75th anniversary logo and will be available for purchase and pickup at MVCC’s College Store. To place an order, visit https://75thanniversaryshop.ccbrands.com/;

Fundraising Campaign: The MVCC Foundation is hoping to raise $75,000 through a series of 75th anniversary-themed fundraising initiatives.

To learn more about MVCC and its programs, go to the college’s website at www.mvcc.edu.