KC and Kristi Mangine’s business has been mushrooming since the couple first started it on a part-time basis in 2008. KC recently provided a tour of the couple’s business – the New York … 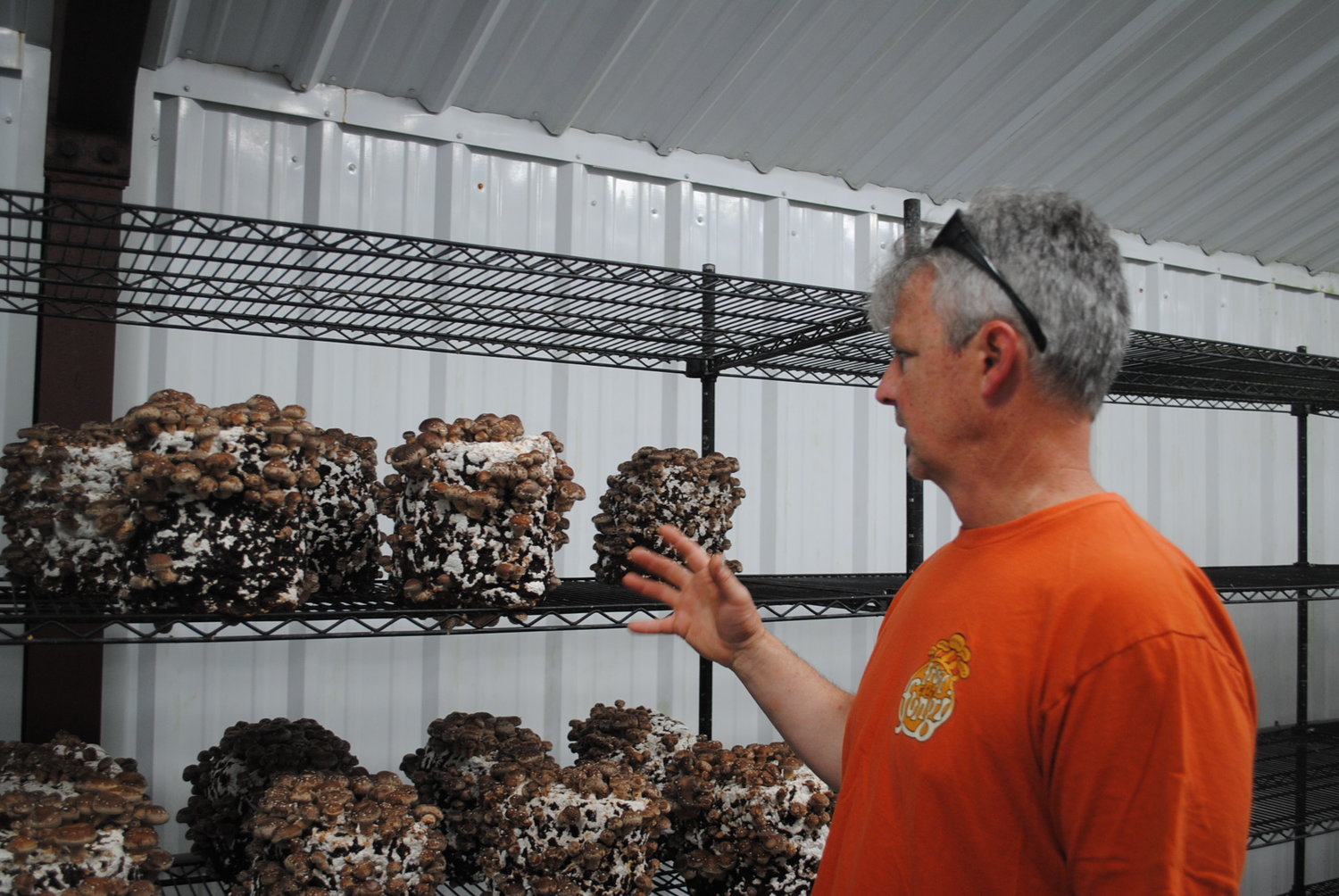 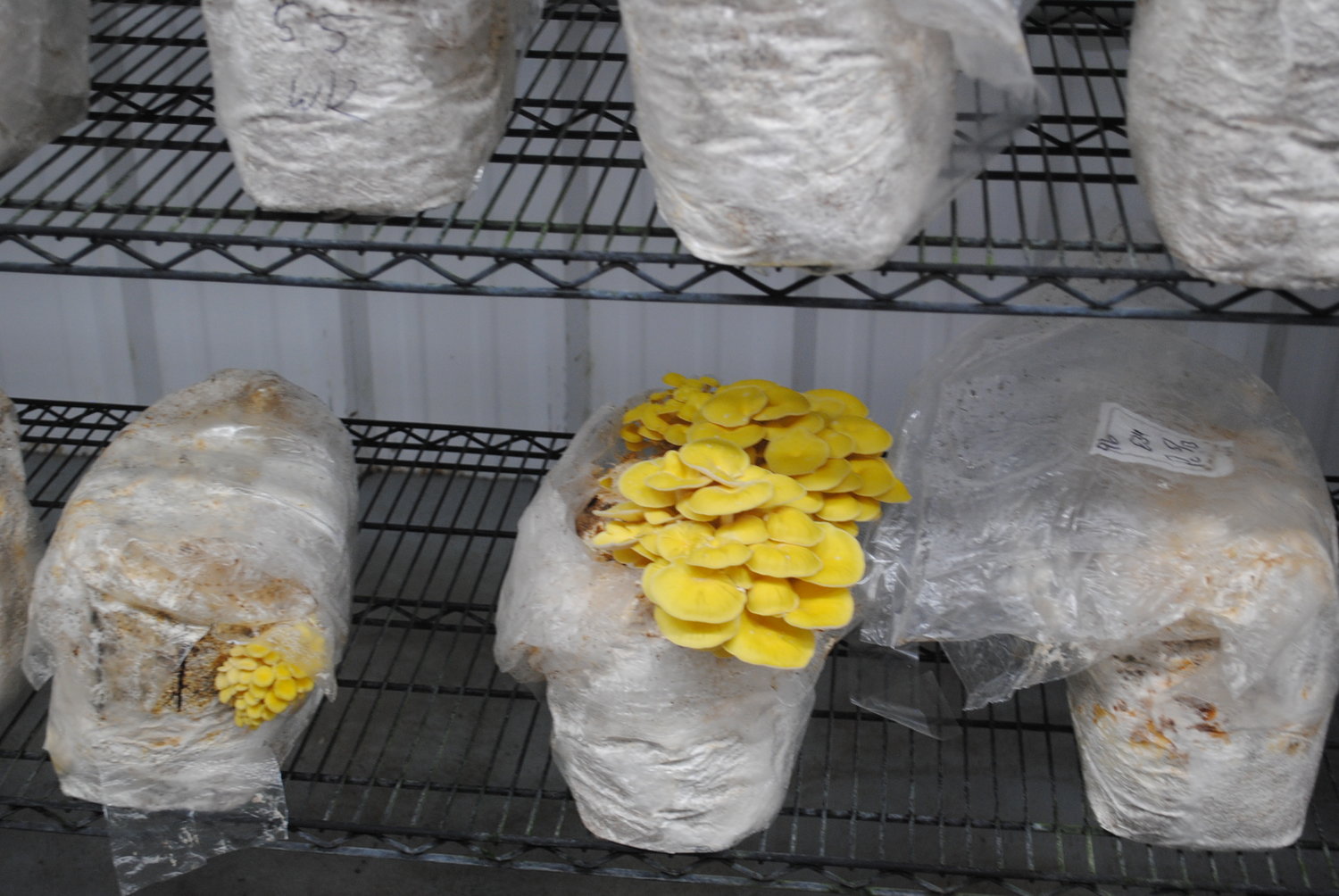 Golden oysters are one of the specialty mushrooms grown at the New York Mushroom Company in Lebanon.
(Photo by Mary Beth Roach)

A sampling of the products sold at the New York Mushroom Company in Lebanon.
(Photo by Mary Beth Roach)
Previous Next
Posted Friday, August 19, 2022 12:00 pm
Mary Beth Roach, Special to the Daily Sentinel

LEBANON — KC and Kristi Mangine’s business has been mushrooming since the couple first started it on a part-time basis in 2008.

KC recently provided a tour of the couple’s business – the New York Mushroom Company – and its “Fruit of the Fungi” brands on their farm at 5767 Lebanon Center Road. The Mangines began the operation because they were looking to farm in some fashion, he said, and within seven years, it became a full-time endeavor.

However, theirs is not a typical farm with acres of crops. While they have some shiitake mushrooms growing on logs on the top of a hill near their home, most of their mushrooms are grown in two large warehouse-like buildings on a small portion of the 47-acre property.

But why were mushrooms their crop of choice?

“Mushrooms became a niche that worked really well for us,” he said. “You can sell them really easily. It’s a high-valued crop. It can be profitable. It was something that fit our lifestyle. We really enjoyed marketing and selling something that we knew was unique and really high quality as well.”

Mangine added that they also enjoy the flexibility of the work, the ability to make their own decisions, and the opportunity to create relationships with chefs and customers.

In addition to sales through their website, nymushrooms.com, the Mangines also sell to such places as The Tailor and The Cook Restaurant in Utica and Clinton’s Farmers Market.

Because they grow most of their mushrooms inside buildings, the Mangines are not dependent on weather conditions for their crop.

In the first building, the couple takes sawdust, mixes it with supplements and places it in individual bags. As Mangine explained, the bags go into sterilizers, where they are heated with steam to kill potential contaminants in the sawdust. Once sterilized, the bags are brought into a clean room and inoculated with mushroom cultures. After the mycelium from the culture has fully colonized the sawdust, the bags are moved to the Grow Room in the second building where they are harvested and processed. They produce whole dried mushrooms, powders and teas. The types of specialty mushrooms they grow include shiitake, lion’s mane, oyster varieties, beech, king trumpet and reishi.

That the couple was able to take their company full-time in 2015 is an indication of the popularity of mushrooms.

“When we got into it, it was something that no one else was doing,” Mangine said. “People were surprised that they could buy mushrooms that weren’t buttons or portobellos.”

While they didn’t expect them to become as popular as they are, Mangine explained that a number of factors have come together to increase people’s interest in the mushroom. He pointed out that research suggests that they can help reduce inflammation and stimulate immune systems, and some people, who have turned away from meat, have found that mushrooms, with their protein and texture, can provide a nice alternative.

As the popularity of the product grows, Mangine said he realizes that more mushroom farms will pop up. “I’m sure there will be more and more. We knew we’d get competition,” he said.

Meanwhile, the Mangines are enjoying the “fruits of their fungi” labor.