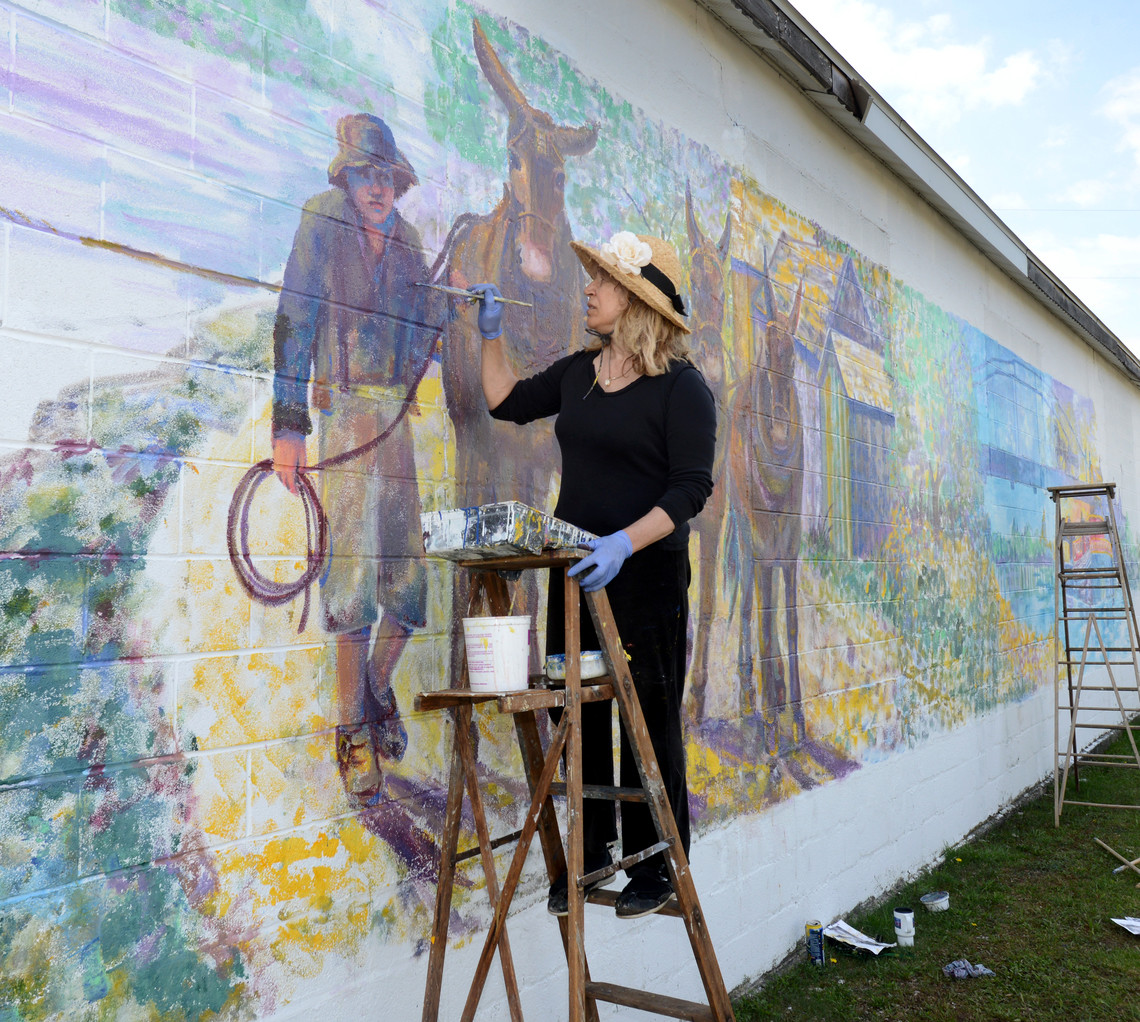 WORK IN PROGRESS — Artist Jane Taylor works on her latest mural in the Town of Verona. The painting, which depicts parts of Higginsville, New London and Durhamville, was proposed by Town Historian Sheila Hoffman to celebrate the town’s rich heritage. (Sentinel photo by John Clifford) 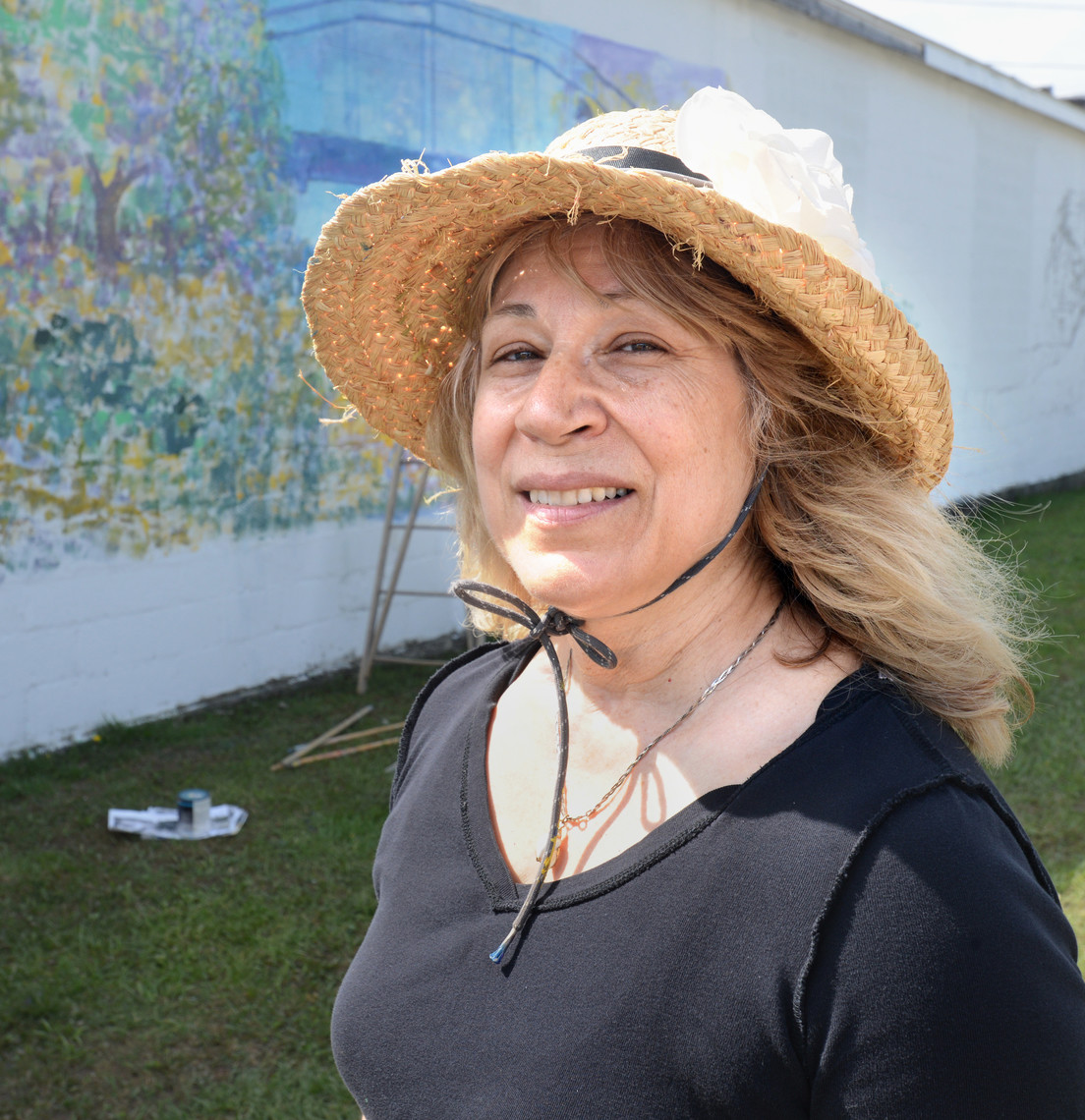 CELEBRATING HISTORY — A view of the freshly painted mural on the Verona Town Building off Germany Road and facing Route 46. (Sentinel photo by John Clifford) 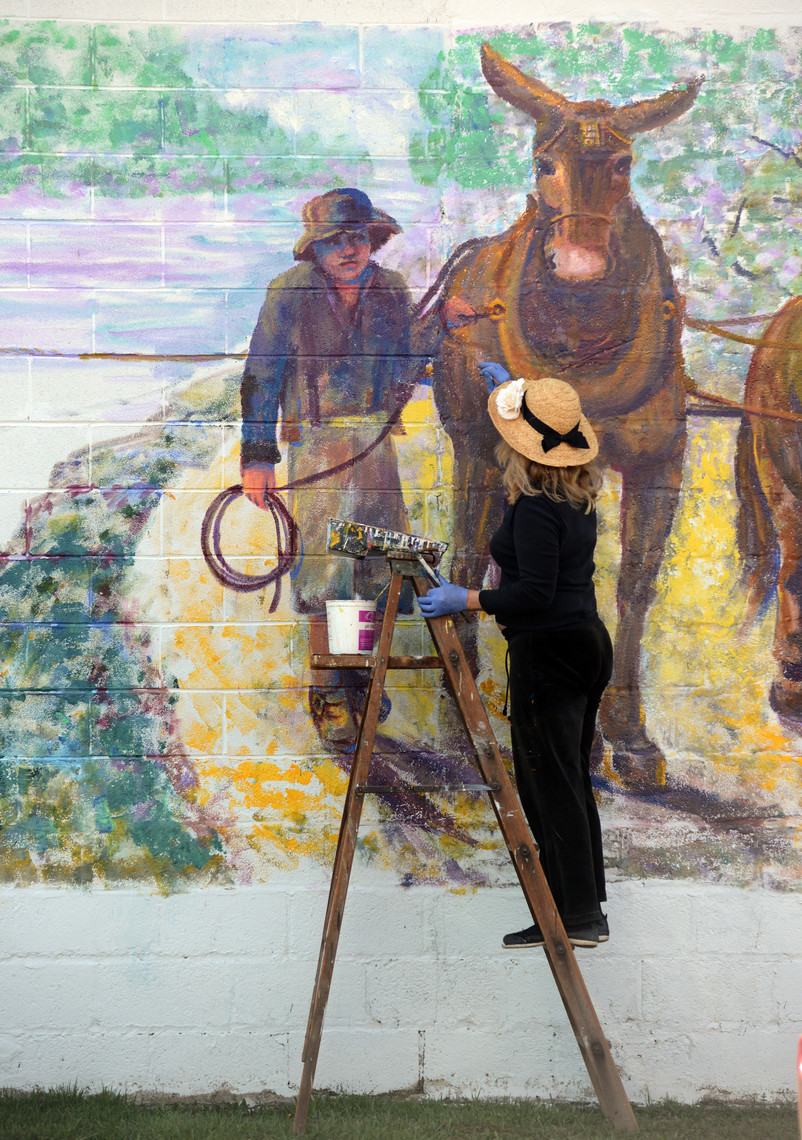 FINISHING TOUCHES — Rome artist Jane Taylor works on the details of a worker leading a team of mules in a scene from her Erie Canal mural in the Town of Verona. (Sentinel photo by John Clifford)
Previous Next
Posted Thursday, May 15, 2014 4:10 pm
Nicole A. Elliott

Now snapshots of Verona’s past will be depicted on the rear wall of the town building on Germany Road, facing Route 46, for all travelers to see.

Local artist and retired Rome schools art teacher Jane Grace Taylor is painting the authentic Erie Canal mural. Known for her work on the Patriot’s Wall off Erie Boulevard in Rome, which is commonly mistaken for Paul Revere, walls have also become the canvasses for Taylor at the Erie Canal Village and Rome Sports Hall of Fame, as well as the Martin Luther King Jr. Dream Park on South Street in Utica. Taylor has won two national Sumi-e Society of America, Inc. awards for watercolor.

Verona Historian Sheila Hoffman, who dreamed up the idea for painting the town mural, said Taylor was chosen for her extensive portfolio and many awards.

“I had the idea for the mural and approached the town about it,” Hoffman said. “The project began as an idea for the promotion of the history of the Town of Verona and was a joint effort between the town and the Verona Historical Association. The town building is long and rectangular, not tall, so we couldn’t do one large mural. So we decided on three separate pictures that would be depicted in the mural side-by-side, representing the north, central and south” parts of town.

She said, “The town then painted” the back wall “to be the canvass for her.”

The town prepared the cinder block building with a resurfacing of the open window spaces and then applied several coats of paint to the wall, preparing a canvas for the artist.

Taylor said she counted every cinder block so that each picture could be depicted in an equal amount of space.

Verona Historical Association members voted on what three “authentic” historic town photos would be used for the mural, Hoffman said. The association also paid for the work, but Hoffman would not divulge the price tag.

The three photos represent New London, Stark’s Landing at Higginsville and the Pfeifer Block business section of Durhamville.  All of these towns thrived along the canal, Hoffman said.

“A picture does tell 1,000 words,” Hoffman said. “You can say the mural connects the past, present and future of the town.”

According to the 1855 New York State Census, New London was home to four hotels, five retail stores, and 16 groceries.  Durhamville had five hotels, seven retail stores and 17 groceries. Higginsville was at that time included by a north-south division in the statistics for those two districts.

Settled in 1792, Verona was established from the Town of Westmoreland in February 1802 with 102 families, according to Hoffman’s research. Early settlers included Ichabod Hand in the hamlet of Verona, George A. Smith in Verona Beach, Eber Durham in Durhamville and Ambrose Jones in New London.

Mills, factories and farming were the main forms of livelihood, with craftsmen operating several successful trades in blacksmithing, harness making, carpentry and masonry. By 1825 the Old Erie Canal was completed, which ran through New London and Higginsville, south to Durhamville. Industry on and along the canal flourished with a variety of related jobs in transport of goods and people all the way to the Midwest. Well-known glass factories thrived in Dunbarton and Durhamville for more than 40 years, and the lavish Verona Springs Hotel with its “water cure” was host to people from around the world, Hoffman said.

The town’s section of the canal was later abandoned with the construction of the Barge Canal, which ran from Rome in a more direct path across to Oneida Lake.  Then the 1860s brought faster, cheaper transport by railway, diminishing the importance of the canal. By 1954 the State Thruway followed a similar path as the Erie Canal through New York, making the Barge Canal even less traveled.

“This mural will be viewed by thousands of people over many years and serve as a proud reminder of Verona’s integral part in the early industry that helped grow New York state,” Hoffman said.

Taylor said she received quite the history lesson when she delved into her research for the project. Like how the phrase, “knowing the ropes,” originated from the canal. The phrase referred to the canal boat operator who had to know what to do when approaching another boat going in the opposite direction on the canal. Sometimes, one just dropped his lines, let them sink, and the other boat could float over the submerged tow rope. Other times, they had to get the ropes around the other boat and attached to the mules again so each could continue.

So far Taylor has spent about a week and half on the mural, putting in 12 hour days, sometimes mostly in the baking sun. Working off old black and white photographs, Taylor said she has had to use the knowledge she has learned about the area’s past and her own imagination to bring the bygone era back to life.

“I added a person” to one of the pictures “because most mules were guided along the canal and I think there is someone in the photo, but he’s just in the background and you can’t see him,” Taylor said. “I also made sure I researched the authentic clothing of the time.”

As for the mural’s bright-colored hues, “Working off black and white photos, I took some artistic liberties with the colors,” she said. “I’m using a lot of my experience to fill in” the blanks.

The experienced artist said she has been happy to see many passers-by, besides motorists on Route 46, come check out her work, and is thrilled with the location of the mural.

“There’s been a woman on horseback and some joggers who have passed by, and there’s all the people using the town park” who can come enjoy the new scene, Taylor said.

The mural has even become an influence for a future project. Taylor said she plans to brush individual Erie Canal paintings that will be on a traveling exhibit in 2015.

“This mural is actually a kick-off to that,” she said. “It’s allowed me to develop some ideas so I can get them down on canvas.”