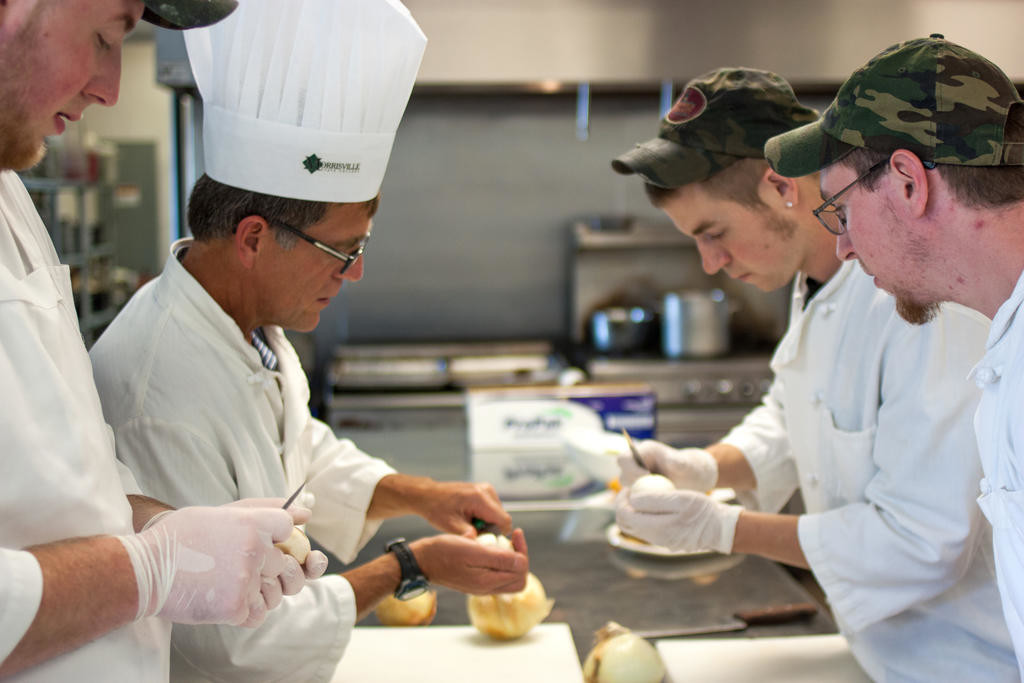 MORRISVILLE — Morrisville State College (MSC) professor and Hamilton resident Kerry Beadle has been honored with the Chef of the Year Award from the Syracuse Chapter of the American Culinary Federation (ACF).

“There are some incredible chefs with an unbelievable amount of talent and knowledge in our chapter,” Beadle said. “This group of professionals compels me to continually push myself. To have them recognize me as one of them is a fantastic honor.”

In addition to his roles as associate professor and chair of the college’s Hospitality Technology Department, Beadle also serves as executive chef at the Copper Turret restaurant run by the Morrisville Auxiliary Corporation of MSC.

The ACF Chef of the Year award is presented to a chef who demonstrates the highest standard of culinary skills, advances the cuisine of America and gives back to the profession through developing future chefs. The recipient is chosen through a vote by members of the ACF, North America’s largest professional chefs development organization that coordinates training and certification for culinarians.

Beadle currently serves as president of the ACF Syracuse Chapter and has been a member since 1992.

Additionally, he is a Certified Executive Chef and a Certified Culinary Administrator with the ACF. He is also a Master Certified Food Executive with the International Food Service Executives Association and serves on the board of directors of the Central New York Restaurant Association.

In 2014 Beadle also received the ACF Chef Professionalism Award, which is presented to a chef who exemplifies the highest standard of professionalism through certification, continuing education and training, culinary competitions and community involvement.

Beadle has also been active on campus, developing the college’s culinary arts management associate degree program, which is integrated into the operations of the Copper Turret. The program has allowed his students to shine as well, preparing for numerous community dinners such as the college’s elegant scholarship-fundraising Harvest Dinner last fall at the Hampton Inn and Suites by Hilton, in Cazenovia.

Beadle and a team of students from Morrisville also contributed to the Great Chefs Dinner, a benefit for the local American Red Cross chapter, through the ACF. He and a group of students also participated in the annual New York State Farm Days event hosted by U.S. Sen. Kirsten Gillibrand in Washington, D.C. They prepared hors d’oeuvres for approximately 600 guests, using all local ingredients and featuring foods grown and processed on campus.

Recognized by his peers for his culinary expertise, Beadle has given presentations and has judged culinary competitions for the Caribbean Hotel Industry Council. He was also recognized at Morrisville State in 2004 with the Distinguished Faculty Award.

Beadle earned an M.S. in hospitality/tourism management from Rochester Institute of Technology, a B.S. in food service systems from Syracuse University, and an A.A.S. in culinary arts from SUNY Cobleskill.

He and his wife, April, reside in Hamilton.

Morrisville State College’s curricula are enriched with applied learning and pave the way for opportunity at both the Morrisville and Norwich campuses. An action-oriented, interactive learning lab, the college is a national leader in technology and has been lauded for its exemplary, innovative and effective community service programs.