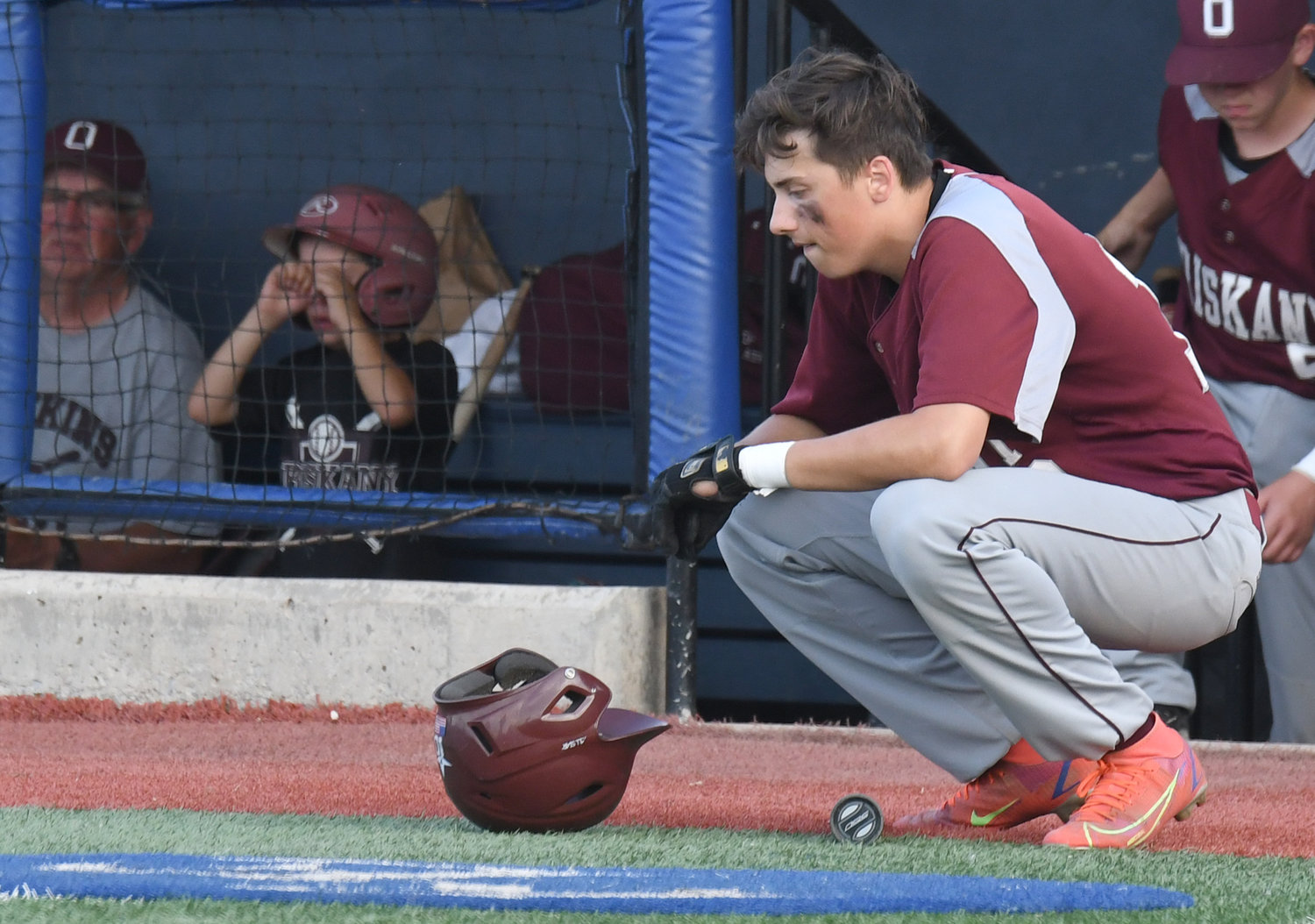 Oriskany senior Ty Zizzi crouches in the on deck circle Tuesday at Onondaga Community College, after the final out of the Section III Class D championship game. Morrisville-Eaton won 3-2. Zizzi, who would have been the next batter, was 1-for-3 in his last high school baseball game.
(Sentinel photo by John Clifford) 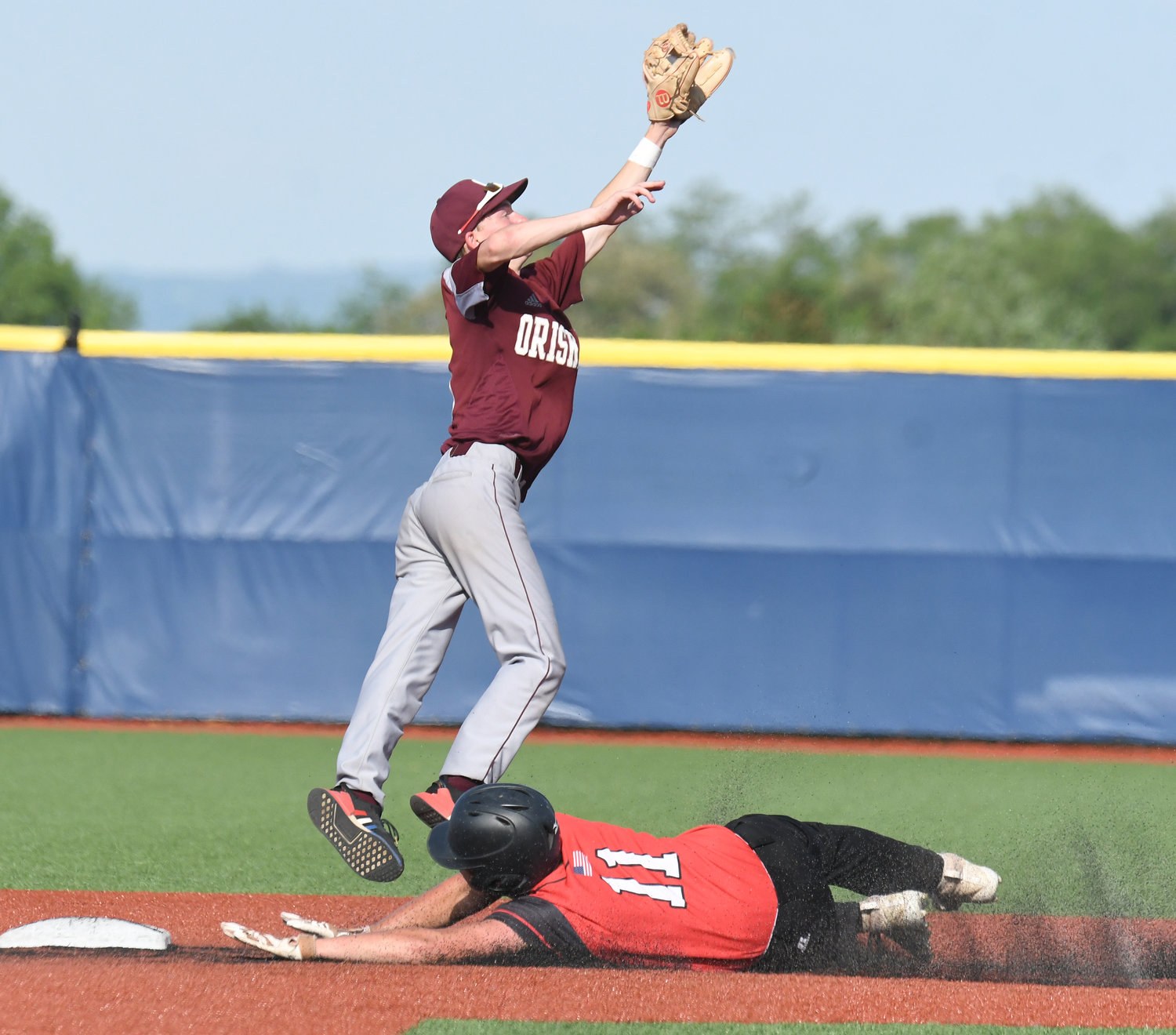 Brady tossed a 116-pitch complete game and drove in the game-winning run at the plate.

Oriskany, the two-seed, got on the scoreboard first, with two runs in the bottom of the second, but couldn’t quite generate the key hit after that. The team left six runners on base in the game.

“We got seven hits against a really quality pitcher. He’s been dominant all year,” said Tom Meiss, Oriskany’s 15-year head coach, after the loss. He was seeking his seventh sectional title.

Instead the team finishes the season 16-4.

The loss snapped the team’s 11-game win streak. The last time Oriskany had lost was May 17, when Morrisville beat them 10-3 at home. It was a split of the regular-season series, with Oriskany winning 7-4 at home on May 9.

In the bottom of the second, Alex Burrows led off with a single to left field then Nick Hays got an infield single up the middle. Hays stole second to set up Oriskany with two runners in scoring position and no outs. After two outs that failed to get a run in, Oriskany starting pitcher Anthony Kernan took it upon himself with the bat, smacking a two-run single to left to make it 2-0.

“We got the lead but they got the momentum back,” Meiss said.

Oriskany lifted Kernan after 3 1/3 innings — and in the middle of an at-bat — after he walked two batters in the inning. In came Chase Koenig in relief. A wild pitch on his first pitch advanced the runners. Lincoln Dapson got an RBI ground out to score Brady and cut the lead to one run. Riley Dooley followed with an RBI single to score Mason Coonrod and it was tied 2-2.

Oriskany has used six pitchers for the bulk of the innings this season, and “We really haven’t pushed people past 80 pitches,” Meiss said. Kernan was at 74 when the change was made. He was, Meiss said, “struggling to find the strike zone.”

Morrisville-Eaton grabbed its first lead of the game in the top of the fifth. After two strikeouts, Evan Baker was hit by a pitch then stole second. Brady followed with an RBI single down the left field line to make it 3-2 in favor of the Warriors.

And Brady was getting stronger on the mound as the game wore on. He allowed two earned runs and surrendered seven hits and one walk. He struck out 12.

“We left runners on first and second” in the first inning, noted Burrows after the game. “We had every opportunity, we just didn’t” capitalize. “He’s a hell of pitcher. Not much more we could have done,” he said of Brady.

Kernan got a no decision in the start. He allowed no hits and three walks with six strikeouts. He gave up two earned runs. Koenig went three innings and took the loss, allowing one earned run. He gave up three hits and struck out three. Eddie Wright was the third Oriskany pitcher. He retired both batters he faced.

“We’re extremely proud of them. The growth, the effort and the time they put in was phenomenal,” Meiss said of his young team, which has only two seniors — Burrows and Ty Zizzi. “We came a long way and we had great senior leadership.” The young players’ game time will help them in the future, he noted.

Burrows agreed. “We started 0-2 and we’re such a young team. They young guys did so well. We have a good future here.”