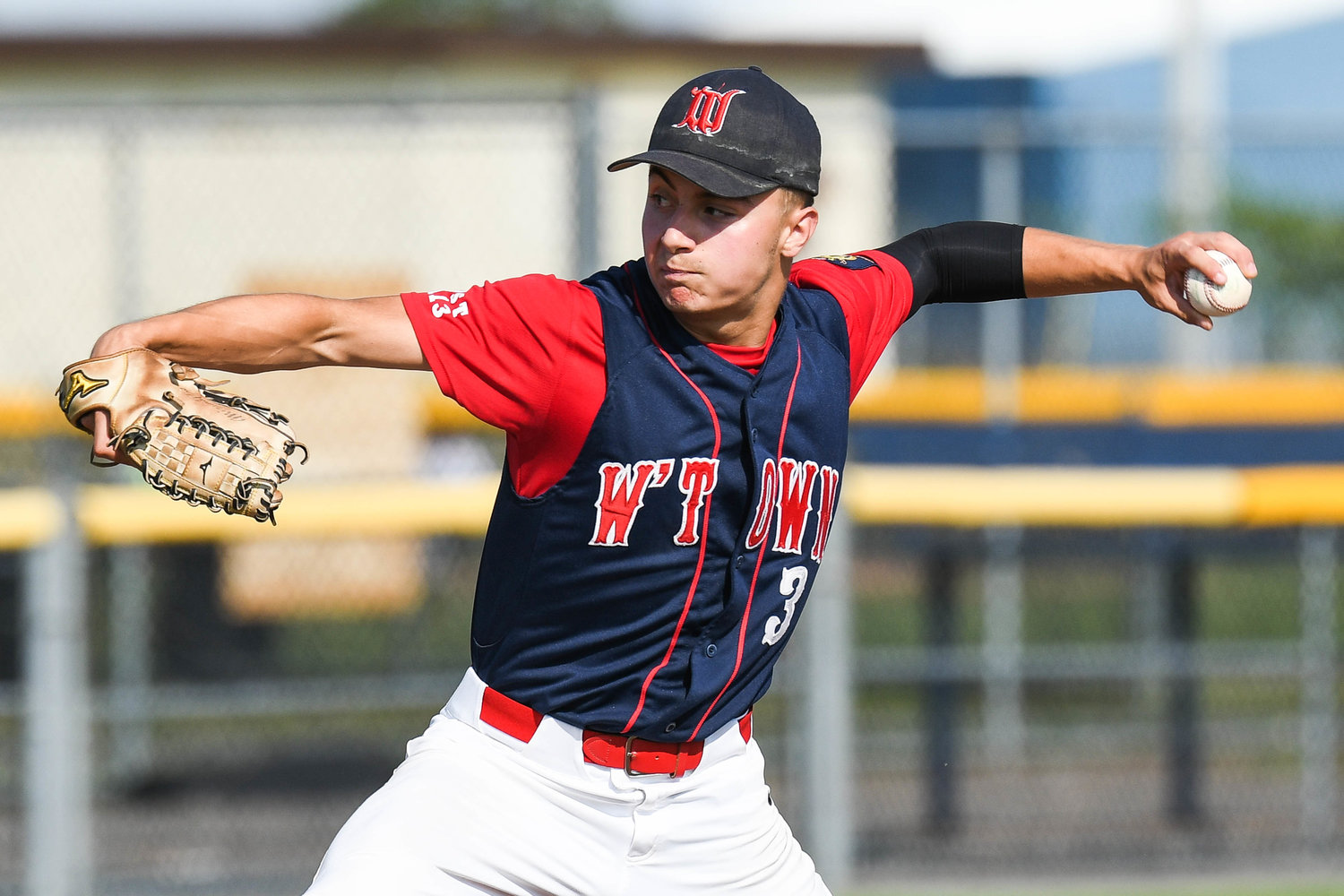 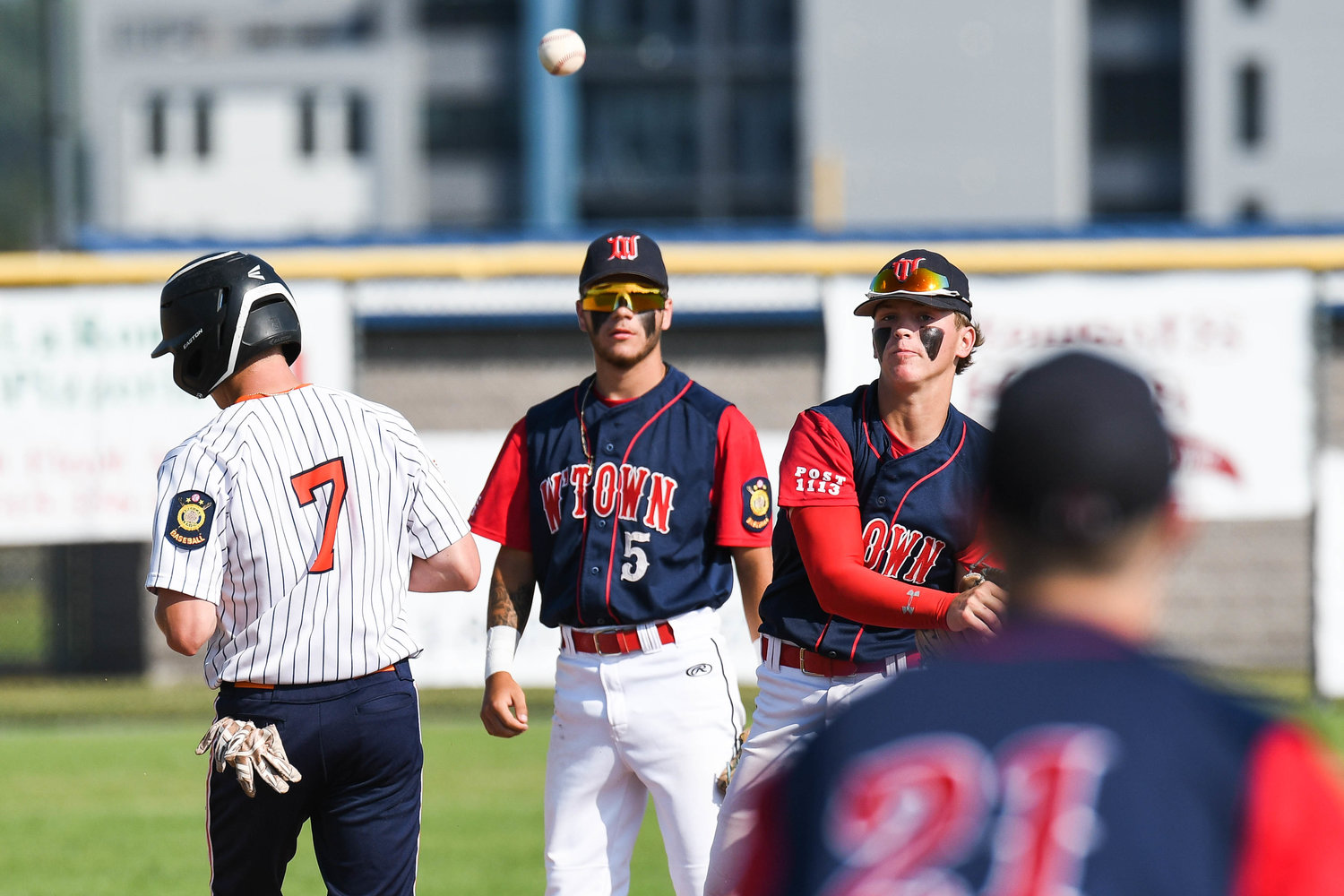 Whitestown Post player Kody Czternastek, right center, throws to first base to turn a double play during the District V American Legion championship game against Smith Post on Tuesday at DeLutis Field in Rome. Czternastek scored the game-winning run in the bottom of the eighth inning for a 1-0 win.
(Sentinel photo by Alex Cooper) 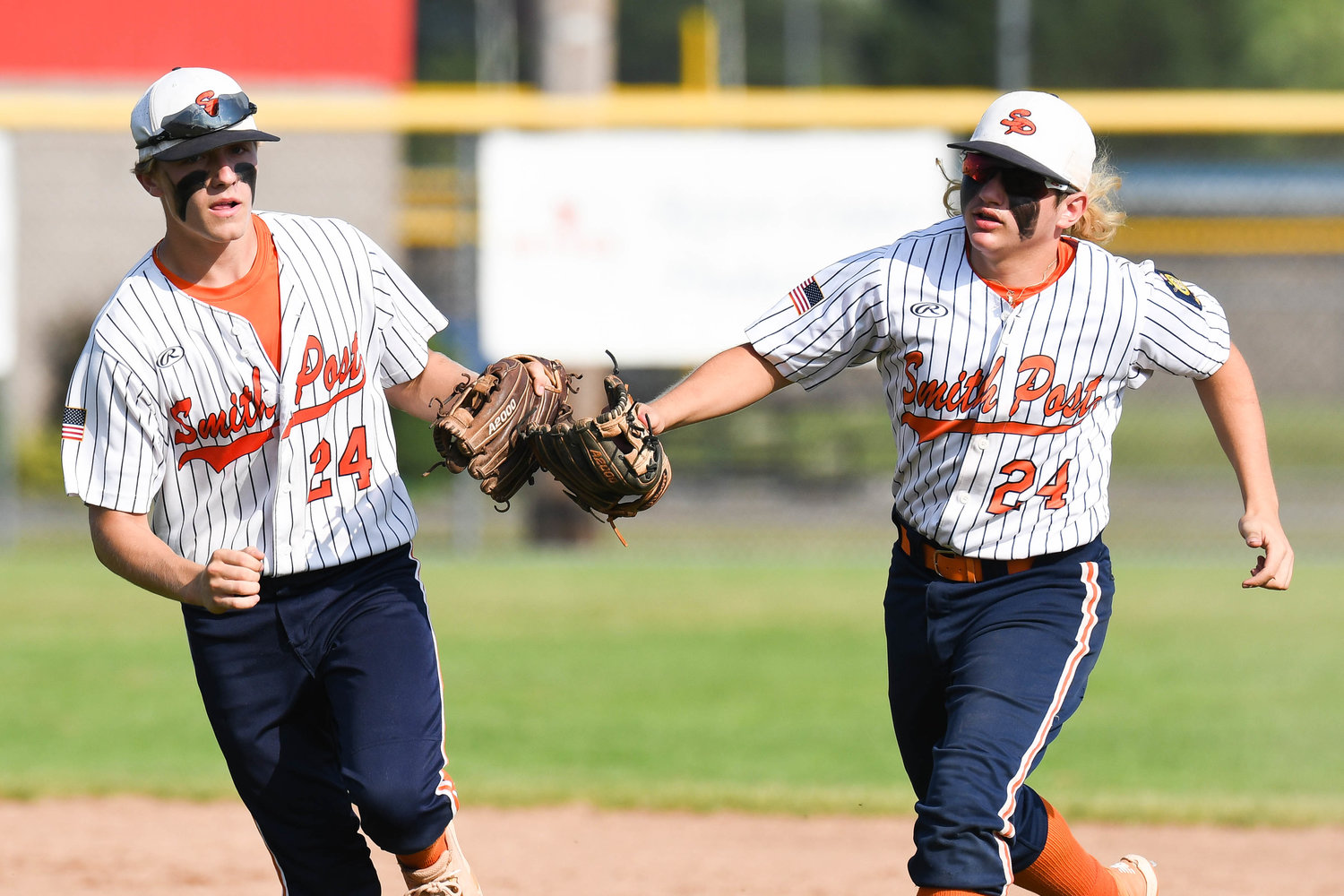 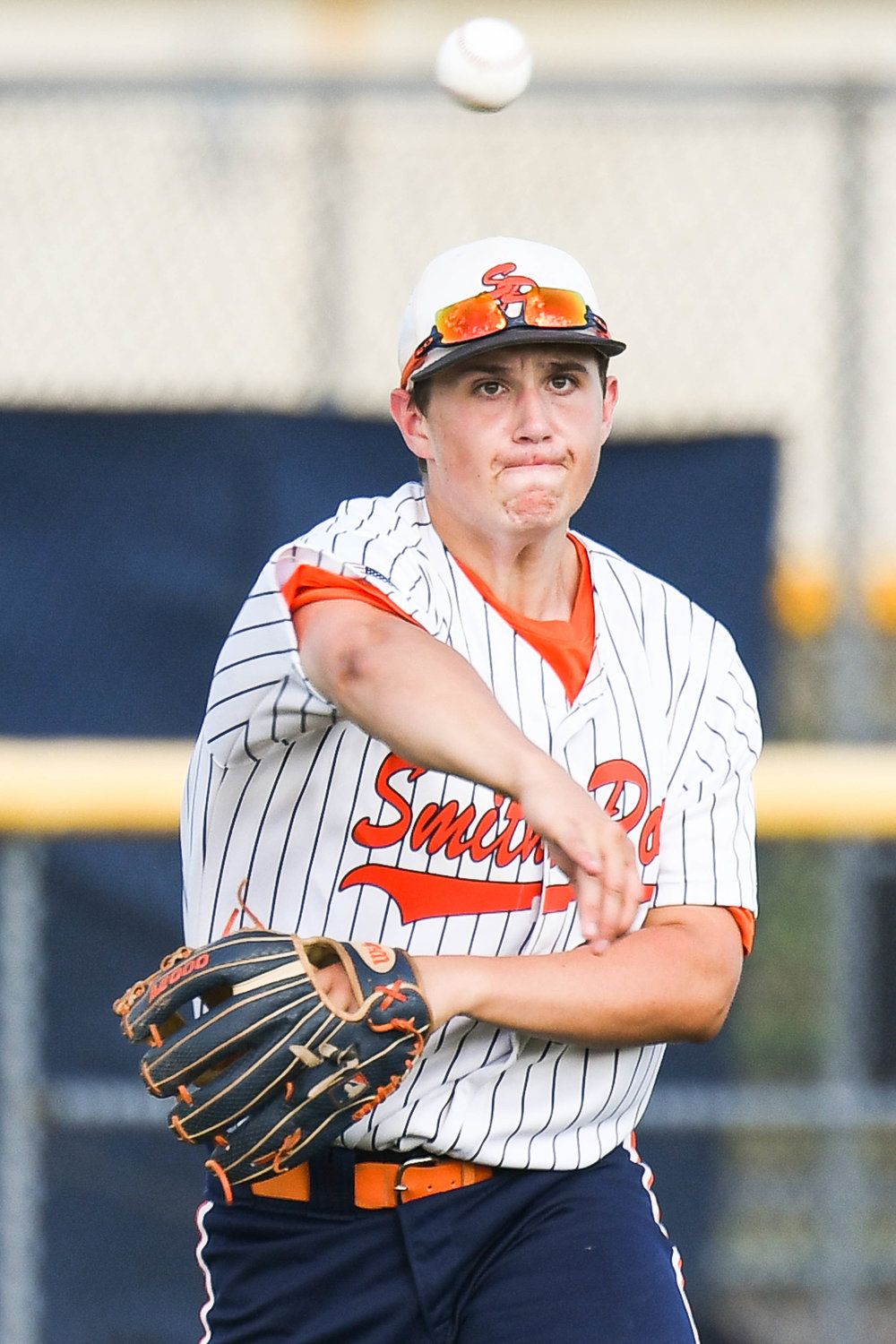 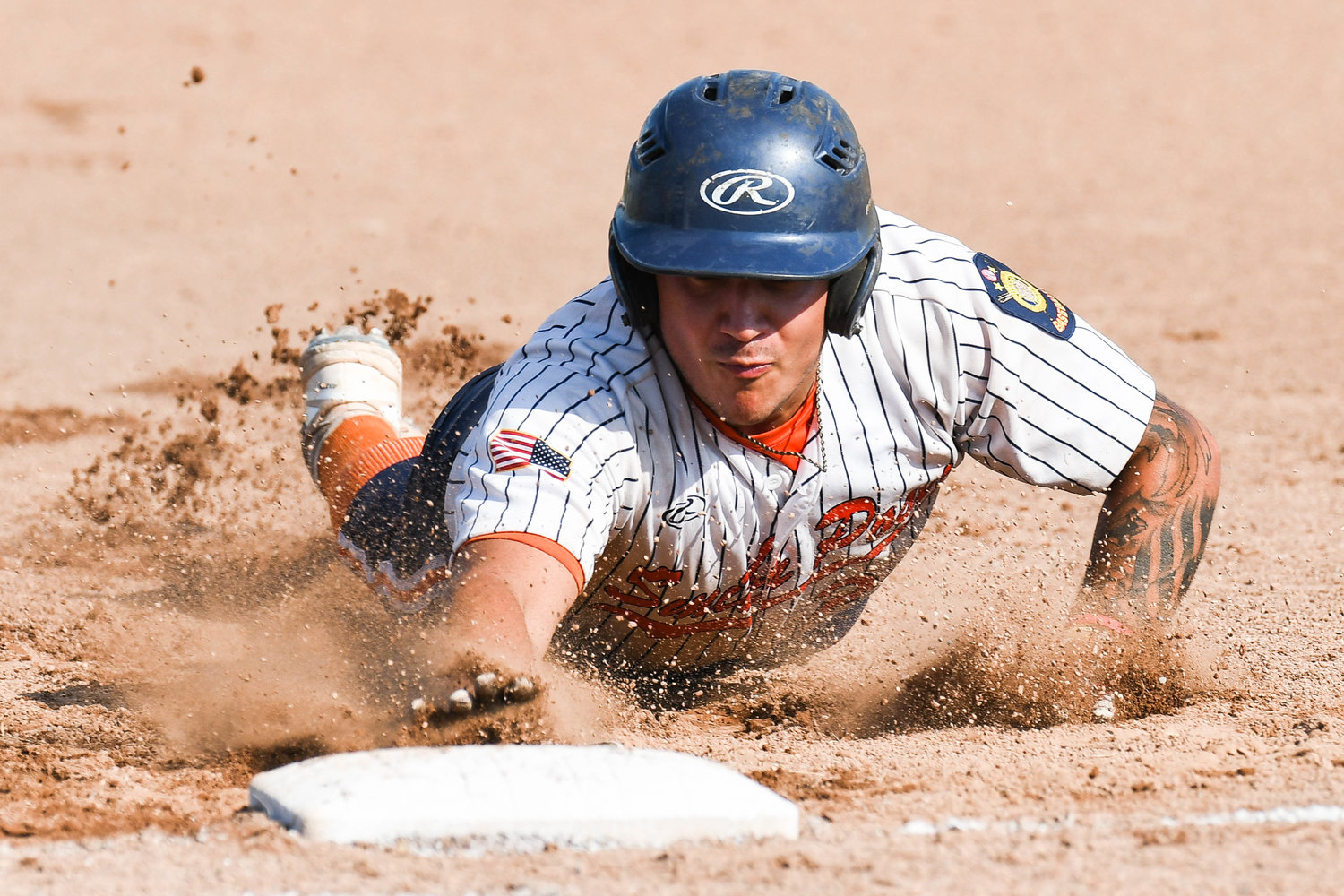 ROME — Ty Montrose’s game-winning single was Whitestown’s only hit of the game in an eight-inning, 1-0 win over Smith Post in the District V American Legion baseball championship game Tuesday at DeLutis Field in Rome.

But it was a double play he induced in the top of the sixth inning that had a huge impact on the game. With no outs and a runner on first, Smith starting pitcher Damon Campanaro rapped into a double play, retired on the back end on a close play at first base. Immediately he turned to the umpire at first and was ejected after a brief exchange.

Campanaro had been throwing a no-hitter when he was ejected.

After Smith Post was retired in the top of the eighth inning, Kody Czternastek led off for Whitestown with a walk. Dominic Bullis laid down a sacrifice bunt to advance him. After Caleb Miller was intentionally walked, Skermont worked a walk to load the bases. Montrose sent the third pitch of his at bat into right center for a hit to score Czternastek with the winning run.

Montrose said his plan was to “put a good swing on it.” Smith pitcher Marco Macri’s first pitch to him was up and in. “The next pitch he grooved it and missed. Third pitch I was able to square it up.” He said he was not bothered by the team being held hitless for seven inings. He had, he said, “faith in my teammates. Everyone knew we’d get the win.”

“Feels great,” said Skermont after the win. “I told the boys last year that when I came back we were going to win it.” Skermont didn’t play legion ball last summer. Smith, he said, is “a tough team that always plays us very hard,” but he said he had his fastball going and could work his off-speed pitches off of it.

And, he said, there was never a discussion about him coming out of the game, even after he’d throw 87 pitches through seven innings. “Right to the end. I appreciate the coach giving me the opportunity.”

Head coach Paul Engelhart noted that the team had lost to Smith Post in the title game in 2019 and 2021, with the league taking a year off in 2020 due to the pandemic. “Little bit of a payback game,” he said after the win. He said he knew it would be a tough game, just not “no runs until the eighth. We battled the whole game. Colin knuckled down,” and was “pretty impressive.”

Engelhart earned his 500th career win earlier in the tournament, then capped it off with a title. “Awesome,” he said with a grin. “You strive to win every game. It’s a great way to cap the week.”

Skermont said the team’s success has been due to “the chemistry and how well we know each other. It mixes in with the talent we have. No cocky players, just confidence.”

Montrose said the team has “A great bond between us all. Hold each other accountable but support each other.”

Whitestown advances to play the champion of District VI at 2 p.m. Saturday at DeLutis Field. Information on the winner of District VI was not available at press time.