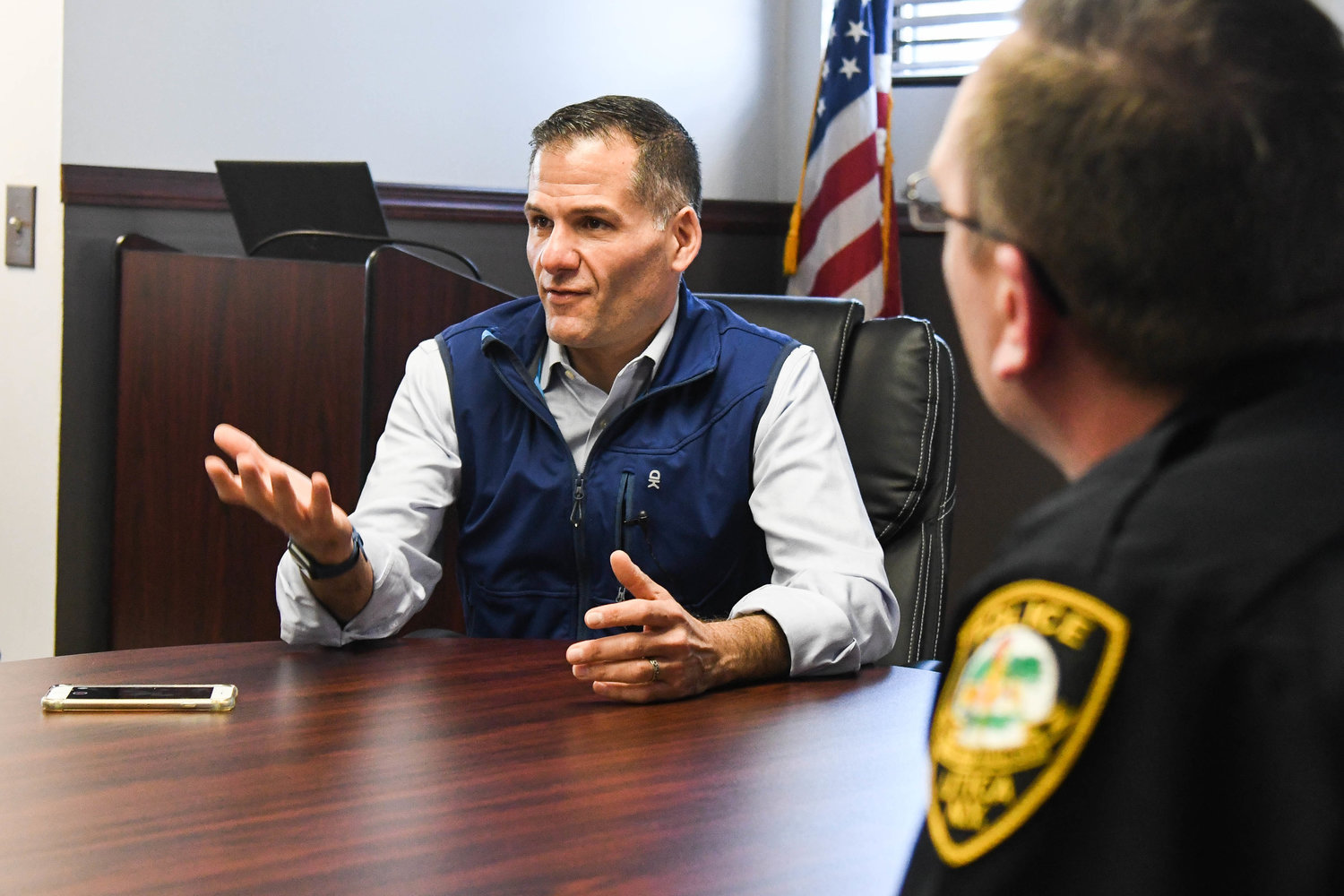 CANDIDATE IN UTICA — Marc Molinaro, a Republican candidate for the newly drawn NY-19 district for U.S. Congress, stopped by the Utica Police Department on Tuesday to talk with department and union leadership. He was joined by John Salka, who is running for New York State Senate.
(Sentinel photo by Alex Cooper)
Posted Wednesday, April 13, 2022 7:30 am
Sean I. Mills
Staff writer
email / twitter

UTICA — Two Republican candidates — Marc Molinaro, for Congress, and John Salka, for state Senate — stopped by the Utica Police Department on Tuesday to have a chat with the leadership of the department and the John E. Creedon Utica Police Benevolent Association.

The two candidates spoke with Utica Police Chief Mark Williams and union leadership about the problems with bail reform and other challenges faced by law enforcement.

“The burden isn’t only on the prosecutors and all of you, but defense attorneys don’t even have the time to read through everything,” Molinaro told the officers about bail reform.

“It is going to compound itself over the next five years if they don’t change things.”

Molinaro is the county executive of Duchess County, southeast of Albany. He is running for New York’s 19th Congressional District.

Following the recent redistricting, Utica is now located in the very northwestern tip of the newly drawn 19th District, which also covers the southern region of Oneida County, and mostly contains Delaware, Greene, Columbia and Ulster counties to the southeast of the Mohawk Valley.

Molinaro touted the pre-arraignment services he helped implement in Duchess County for people being arrested, and how he increased access to public defense and social services. He said this led to a 50% reduction in violent crimes and a 40% reduction in mate population over eight years — until he said bail reform undid it all.

“What we should have is a system that assesses risk and protects victims and law enforcement and the community,” Molinaro stated.

“And if the individual is a high risk to re-offend or to hurt themselves, well then they ought to be either incarcerated for a period of time or an alternative to incarceration. Without that, you just have people continue to commit crimes.”

As a member of Congress, Molinaro said he could use the federal government to put pressure on New York State to fix bail reform as a violation of the U.S. Constitution.

“Cashless bail is an address of our Constitutional rights. And so the federal government does have the capacity to ensure that your rights, from a funding perspective, are protected,” Molinaro stated, pointing to rights such as a speedy trial and the right to an attorney.

“New York State has abandoned some of the responsibility to protect those Constitutional rights.”

“Bail reform has been an unmitigated disaster,” Salka told the officers. He noted that he was serving in the Assembly when bail reform was under discussion, and those in favor of the reform did not have the answers he wanted.

Salka said that the government needs to look into fixing the underlying problems that lead to crime, including the loss of strong father figures in the family dynamic.

“We need to give these people good schools, good jobs. We need to give them dignity, and they don’t have to go out onto the street and rob. So we’ve got to get to the root cause of why these people are ending up incarcerated, why are they offending? We know we have a major problem in this country with single parent homes. Most of these kids, 70% of these kids, are growing up without fathers,” Salka stated.

“I grew up without a father, but I had a little, short Italian woman who would slap me in the head if I got out of line, and nuns over at St. Francis School who took care of me, and the discipline.”

Along with changes to bail reform, Utica Police Chief Mark Williams also addressed concerns over other reforms. He said his department “whole-heartedly” embraced the call for reform in the wake of the murder of George Floyd, but he was dismayed that the state government did not provide any funding to make those reform ideas a reality.

Williams said some of the major concerns he would like to see addressed are crisis intervention training, ghost guns in the hands of criminals and pole cameras.

The chief noted that Utica only has 27 pole cameras throughout the city, while other municipalities have hundreds. With so many witnesses refusing to cooperate with police, Williams said pole and doorbell cameras have become very important.

“We’ve made a lot of cases based just on video evidence,” Chief Williams said.