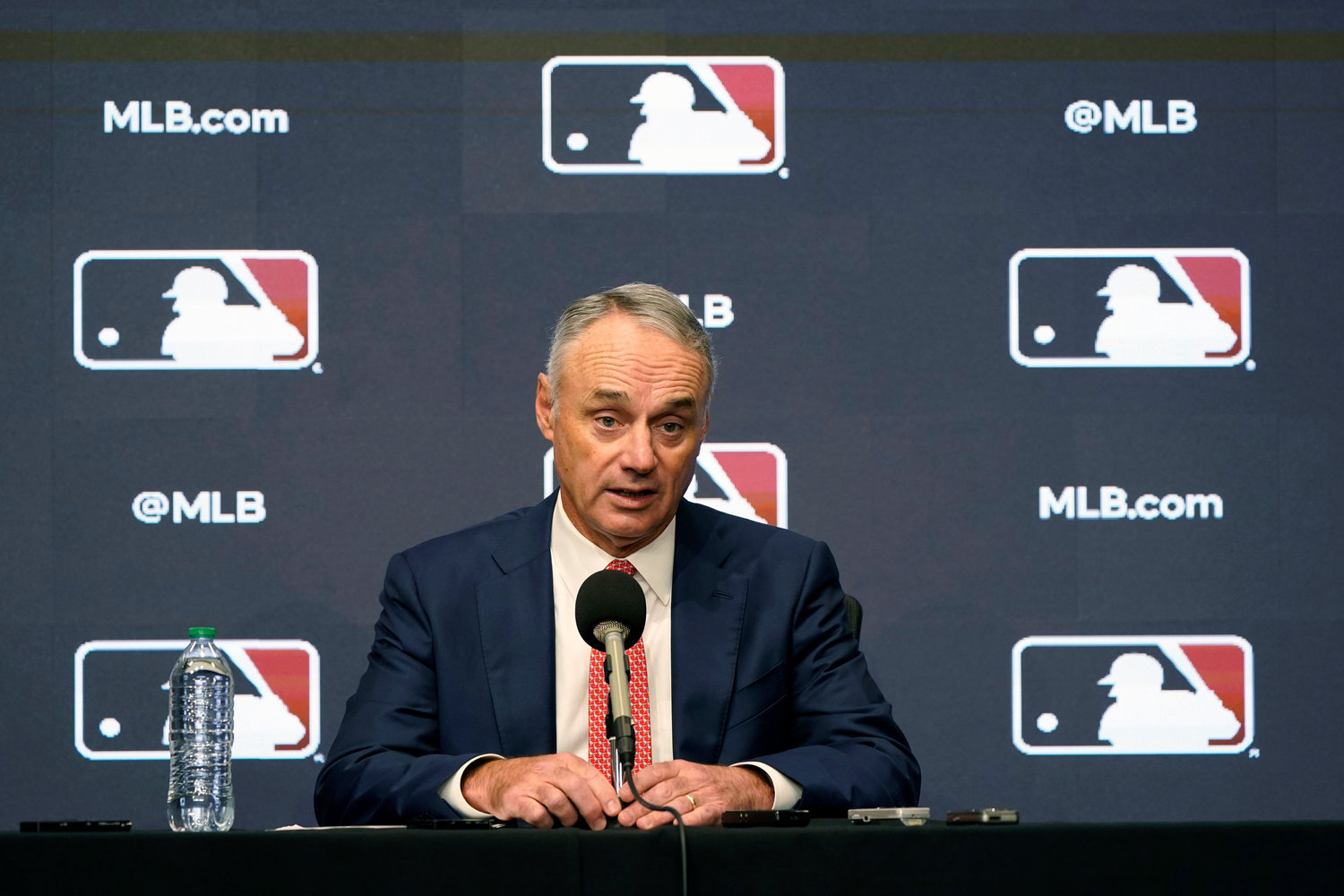 FILE - Major League Baseball commissioner Rob Manfred speaks during a news conference in Arlington, Texas, Thursday, Dec. 2, 2021. Major League Baseball and the players‚Äô association are scheduled to meet Thursday, Jan. 13, 2022, in the first negotiations between the parties since labor talks broke off Dec. 1. The planning of the meeting was disclosed to The Associated Press by a person familiar with the negotiations who spoke on condition of anonymity because no announcement was made. (AP Photo/LM Otero, File)
AP
Posted Thursday, January 13, 2022 6:02 pm

NEW YORK (AP) — Baseball labor talks to end the lockout resumed Thursday for the first time in 1 1/2 months with little evident progress during a bargaining session that lasted about an hour, jeopardizing a timely start to spring training,

Major League Baseball imposed the lockout on Dec. 2 as soon as the five-year collective bargaining contract expired, a few hours after talks broke off.

The discussions Thursday were the first on core economic issues following a 42-day gap, and MLB made proposals it hoped would at least start to generate momentum.

After MLB made its proposal, the sides caucused. The players’ association then told MLB it will respond but did not commit to a specific date.

While the sides were back in bargaining, they met just five weeks before the scheduled start of spring training workouts on Feb. 16. Given the time needed for players to travel to Florida and Arizona, and then to go through COVID-19 protocols before taking the field, the prospects of a timely start are diminishing.

A deal would need to be reached by late February or early March to allow the minimum time for training ahead of the current opening day, set for March 31.

MLB’s proposal contained no movement on free-agent eligibility or luxury tax thresholds, two people familiar with the negotiations told The Associated Press. The people spoke on condition of anonymity because no public comment was authorized.

Management did backtrack on its proposal to start a bonus pool that would replace salary arbitration for players with at least three but less than six years of major league service.

MLB maintained it proposal to replace arbitration with a bonus pool for the so-called “super twos,” the top 22% by service of those with at least two seasons but less than three.

Teams proposed to address the union's concern over club service-time manipulation by allowing a team to gain an additional draft pick for an accomplishment by a player not yet eligible for arbitration, such as a high finish in award voting.

There was no movement on the sides’ different stands on luxury tax levels, minimum salaries or on the union’s desire to decrease revenue sharing, which would leave large-market teams with more money to spend.

In addition, MLB wants to expand the postseason from 10 teams to 14, and the union is offering 12.

MLB has offered to eliminate draft-pick compensation for players lost through free agency, which has been in the labor contract since 1976; to expand the designated hitter to the National League; and to institute an NBA-style draft lottery to address rebuilding, though the sides differ on how many teams the lottery would include.

A lengthy gap between talks is not unusual for the parties when squabbling.

After another round, talks broke off Dec. 22 until sessions from Feb. 1-7 and Feb. 27-March 4. The strike ended after U.S. District Judge Sonia Sotomayor — now a Supreme Court justice — issued an injunction on March 31 that restored the rules of the expired contract.