The Thomas R. Proctor High School baseball team had its share of opportunities Tuesday. The bad news for the Raiders is that the team didn’t fully take advantage of having the bases … 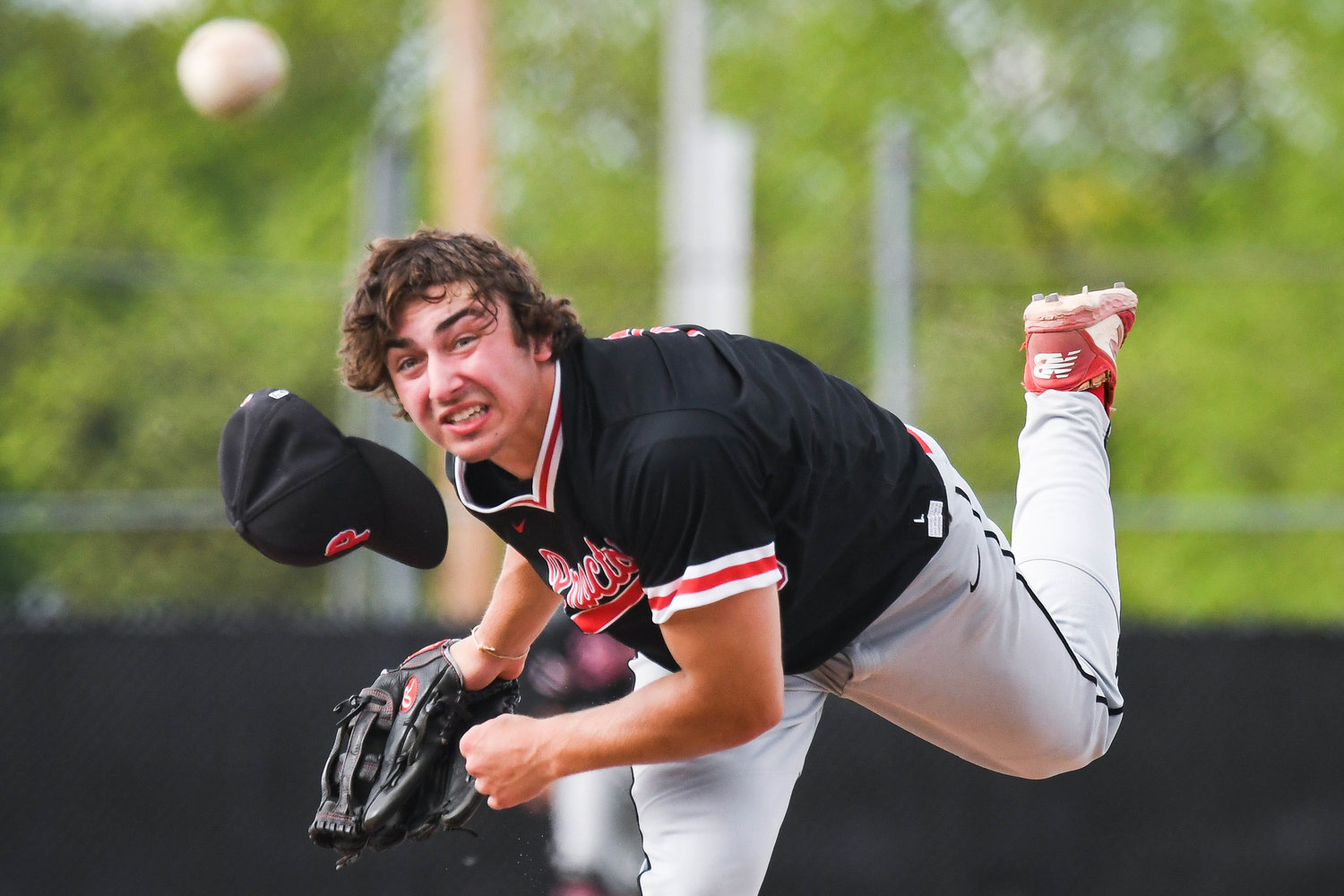 Proctor pitcher Peyton Kimball loses his hat while delivering a pitch to the plate during a Section III Class AA quarterfinal baseball game against Fayetteville-Manlius on Tuesday at Murnane Field in Utica. The fourth-seeded Raiders were edged 5-4 by the fifth-seeded Hornets in eight innings.
(Sentinel photo by Alex Cooper) 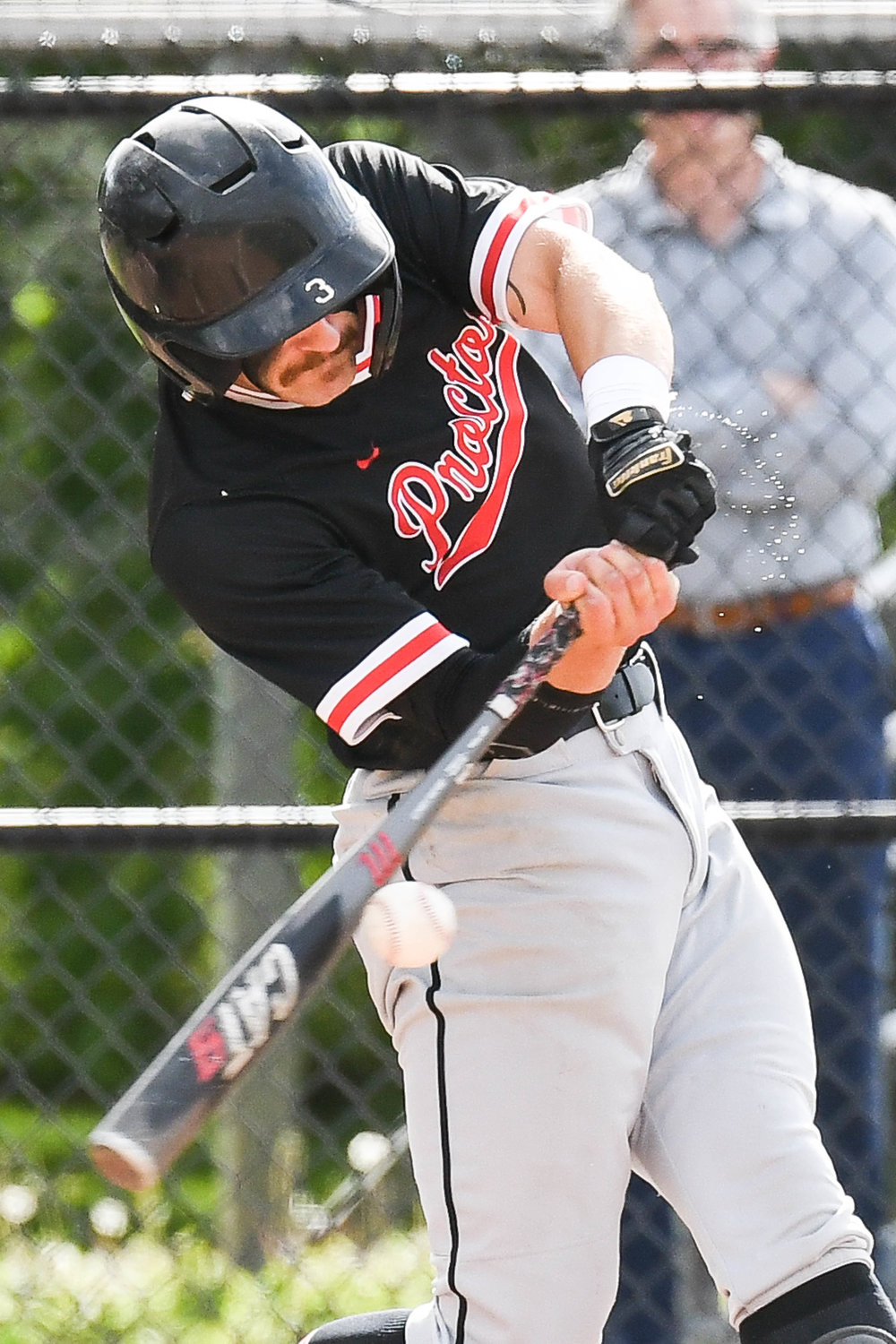 Proctor batter Todd Abraham swings at a pitch during the Section III Class A playoff game against Fayetteville-Manlius on Tuesday at Murnane Field in Utica. Abraham had two hits, a run and an RBI in the team's 5-4 loss in eight innings.
(Sentinel photo by Alex Cooper) 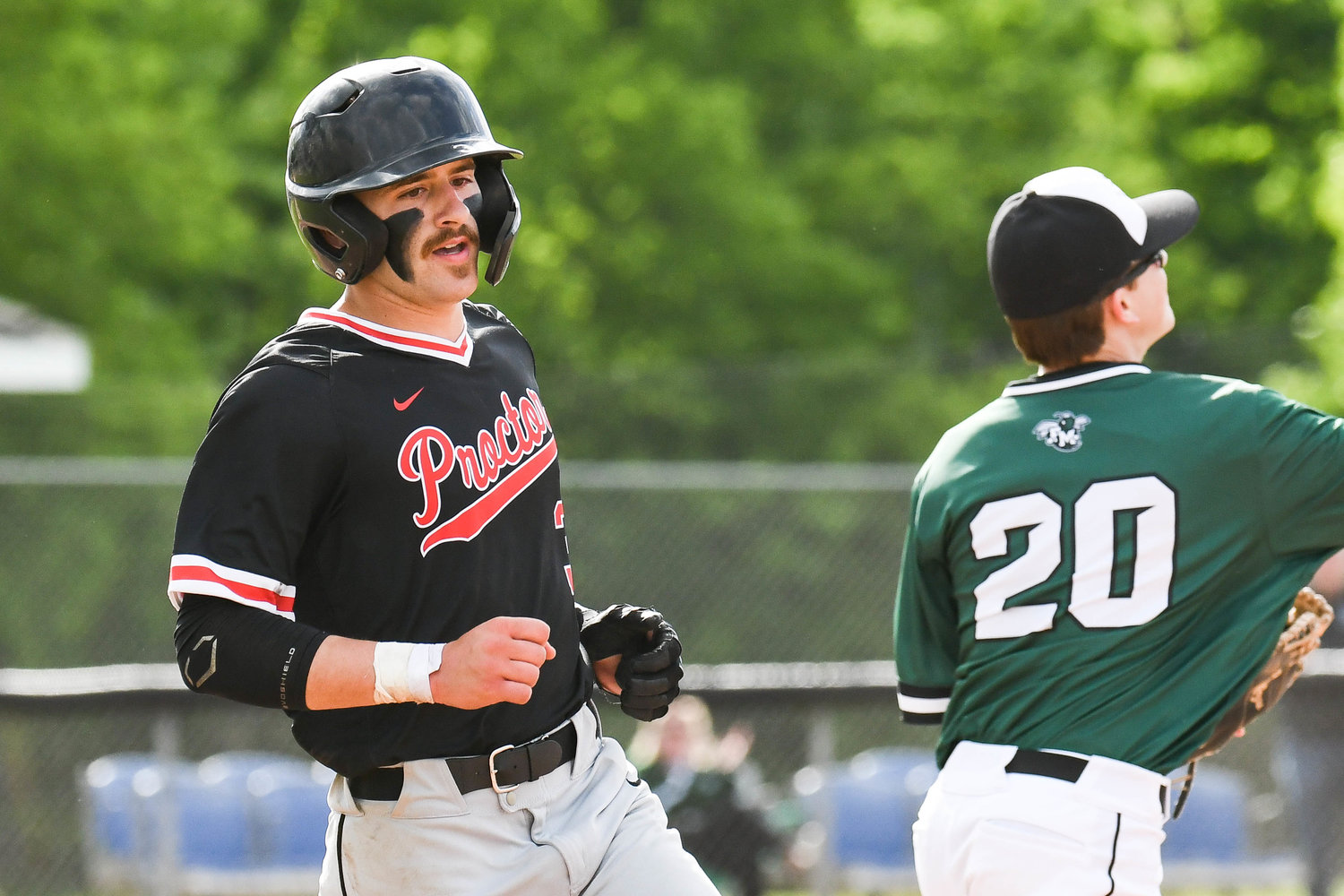 Proctor baserunner Todd Abraham runs to first base during the Section III Class AA quarterfinal game against Fayetteville-Manlius on Tuesday at Murnane Field in Utica. Abraham had a pair of RBIs in the game.
(Sentinel photo by Alex Cooper) 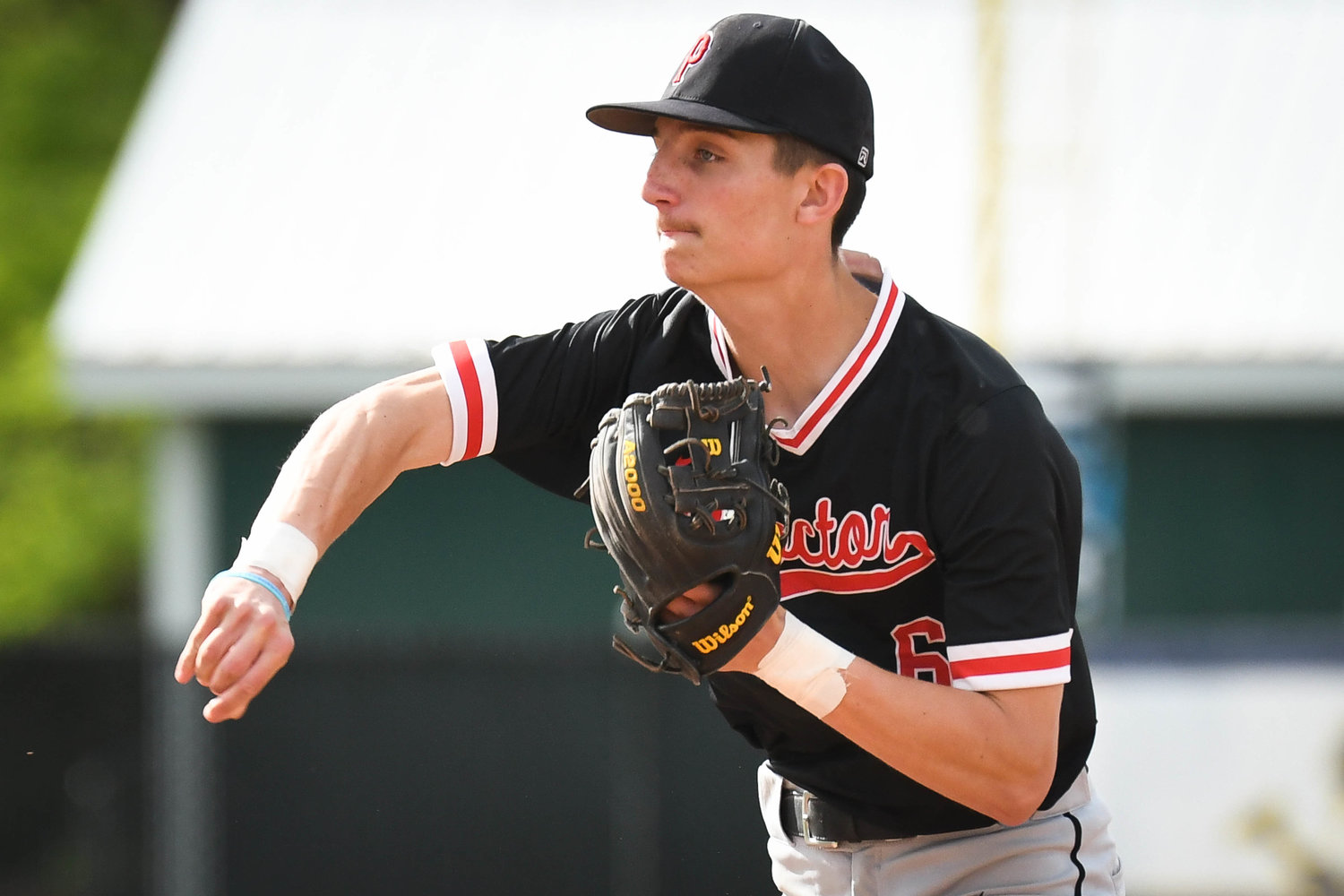 Proctor infielder Joe Gentile makes a throw to first base during the game against Fayetteville-Manlius on Tuesday at Murnane Field in Utica.
(Sentinel photo by Alex Cooper)
Previous Next
Posted Tuesday, May 24, 2022 9:55 pm
Ben Birnell
Sports writer
email / twitter

The bad news for the Raiders is that the team didn’t fully take advantage of having the bases loaded in the third and fifth innings in a Section III Class AA quarterfinal game. There were also struggles in the final two innings.

Meanwhile, fifth-seeded Fayetteville-Manlius got all it needed on its bases loaded opportunity in the eighth inning.

Samuel Kuss’ fly ball to center field with one out in the eighth was enough to score Thomas Woodridge and then F-M took advantage of fourth-seeded Proctor’s miscues for a 5-4 win at Murnane Field.

“Everybody was planning to see Thursday (in the semifinals) and fight another day,” said junior pitcher Peyton Kimball, who also had an RBI single as part of a small rally in the bottom of the third inning. “There’s always next year.”

Proctor stranded a total of seven baserunners in the loss, which ends the Raiders’ season at 11-7 overall. The team had won nine of its last 11 games entering Tuesday.

“We left too many guys on base … with good hitters up,” Proctor coach Dave Guido said. “It is taking strike three and not busting the game wide open. You can’t let a team like that hang around. We let them hang around and that was it.”

Proctor grabs 3 runs on an Abraham RBI single, Lee’s bunt that FM had an errant throw at home and Kimball’s RBI single with 0 outs.
Proctor eventually had bases loaded but couldn’t bring them in.
3-2 Proctor after 3

With the game tied at 4 in the bottom of the seventh inning, Proctor’s three, four and five hitters were set down in order by F-M reliever Seth Albert. The eighth didn’t play out much better as the Raiders had the tying run picked off twice trying to get into scoring position.

“Those are the type of things we did when we lost,” Guido said. “There was a missed sign (in the eighth) when we’re trying to bunt him over. That hurts you. It is just not good baseball.”

The result put a damper on solid pitching performances by Kimball and sophomore Parker Giruzzi.

Kimball allowed five hits and four runs while striking out five and walking one in 5 2/3 innings. He was lifted in the sixth inning after Chris Hoalcraft’s sacrifice fly and Kuss’ RBI single helped F-M tie the game at 4 with two outs. Giruzzi allowed two hits with a run, a walk and two strikeouts in 2 1/3 innings.

“I thought Peyton threw a great game. Parker came in and got us into the dugout tied,” Guido said. "You can’t ask for more than that."

Proctor standout junior shortstop Todd Abraham finished 2-for-4 with a run and had an RBI single to score sophomore Genero Clemente – who drew a walk to start the third inning – to help Proctor’s rally. Classmate Jacob Lew added an RBI on a bunt single to score Joe Gentile – who also drew a walk to get on – on an errant throw. Kimball’s RBI single on the next at-bat scored Abraham to make it 3-2 with no outs. With the bases loaded, however, Proctor went down in order.

In the fifth, junior Angelo Podagrosi singled with one out, classmate Joe DePaul was hit by a pitch and fellow junior Ty Bonner also singled to load the bases. Juan Baez’s sacrifice fly scored Podagrosi for a 4-2 lead, but Maxwell Danaher got a strikeout to end the threat.

“We just fell short. There were little minor errors,” Kimball said. "We fix those up, we’re playing (again in the next round)."