KINGSTON - When a fire last November destroyed the apartment building where Sheila Mackey lived, it claimed not only all her belongings but the decades of memories each of those items represented. So … 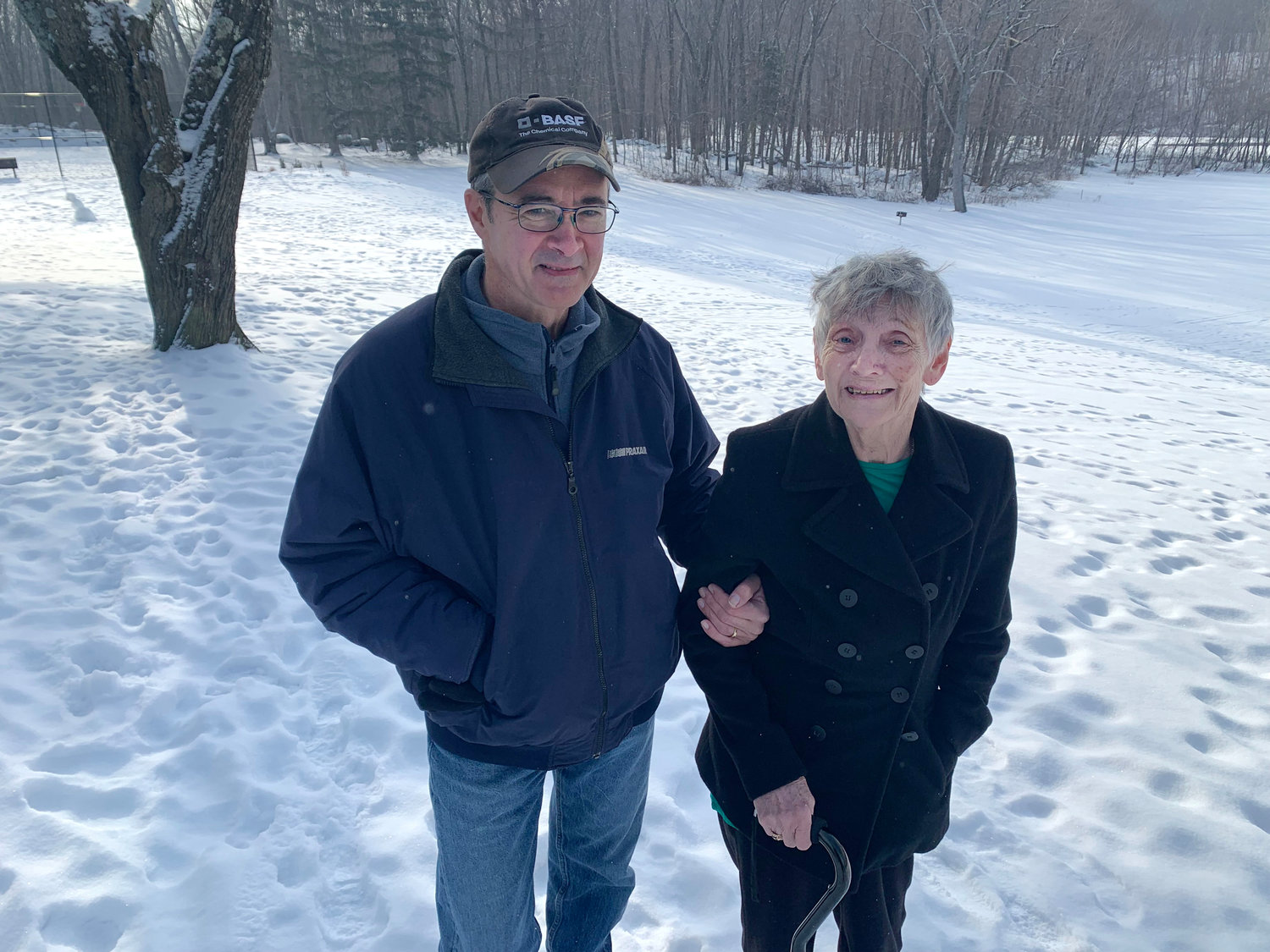 TREASURED FIND — Bob Bacchi and Sheila Mackey, both of Highland, stand with each other at Berean Park at which Mackey would spend hours as a teenager with her friends. Bacchi found Mackey’s 1960 high school ring from Highland High School which her daughter had lost decades before. Bacchi was using a metal detector along the hill adjacent to the tennis courts, seen behind them.
(Tania Barricklo/Daily Freeman)
Posted Thursday, February 10, 2022 7:30 pm
Associated Press

KINGSTON - When a fire last November destroyed the apartment building where Sheila Mackey lived, it claimed not only all her belongings but the decades of memories each of those items represented.

So when a stranger telephoned two months later to say he had found her 1960 Highland High School class ring in Berean Park, it was like getting a piece of her life back.

“It was a miracle,” Mackey said in a recent interview. “I couldn’t have been happier. It just was the highlight of my day, my life. It brought tears to my eyes.

Mackey’s “angel” was Highland resident Bob Bacchi, who found the class ring, which had been lost decades before, buried beneath inches of dirt and grass in April 2020 while searching for items with his metal detector at Berean Park.

Bacchi, 64, said he took up metal detecting as a hobby about two years ago after learning about it by watching videos on YouTube.

“The idea of looking for something underground and digging it up was very appealing to me,” Bacchi said. He bought a metal detector and joined the growing throngs of people searching for buried treasures in parks and beaches across the region.

“You find a lot of junk,” he said with a laugh.

I look at it like I’m cleaning up the beach,” he said.

Over the course of the past two years, Bacchi said he’s found 480 coins of various denominations, including some foreign coins and many that were so corroded you couldn’t even read the date. He’s found Garden State Parkway tokens on his Highland property, roofing nails and more pull tabs than he could count.

“You find a lot of garbage and the ‘treasures’ are few and far between but they’re interesting.

Among the more interesting finds, he said, was a $1 coin featuring James Buchanan, the nation’s 15th president.

But in his mind, the most valuable find so far has been Mackey’s high school ring.

Bacchi said he brought the ring home, cleaned it up and began searching for the ring’s original owner. His daughter scoured the Highland High School yearbooks for that year and came up with two names that seemed to fit the inscription: twin sisters Sheila Mackey and Sharon Mackey.

But they had no luck in tracking down either woman and the ring remained unclaimed in Bacchi’s Highland home.

That all changed in December when the Freeman’s photographer spotted him on Kingston Point Beach one day while he was searching the beach with his metal detector and asked him, like so many before, what the most valuable thing he ever found was.

The Freeman published the photo of Bacchi and the story of the ring and a few weeks later, Bacchi got a call from someone who studied genealogy as a hobby, offering his assistance in tracking down the ring’s owner. It took some time, but earlier this month, Bacchi was able to find Mackey and return the ring lost so many decades ago.

“She was so happy,” said Bacchi. “It was really a feel-good moment.”

Mackey told Bacchi her daughter, when she was a teenager, liked to wear her jewelry and believes she lost the ring at the park.