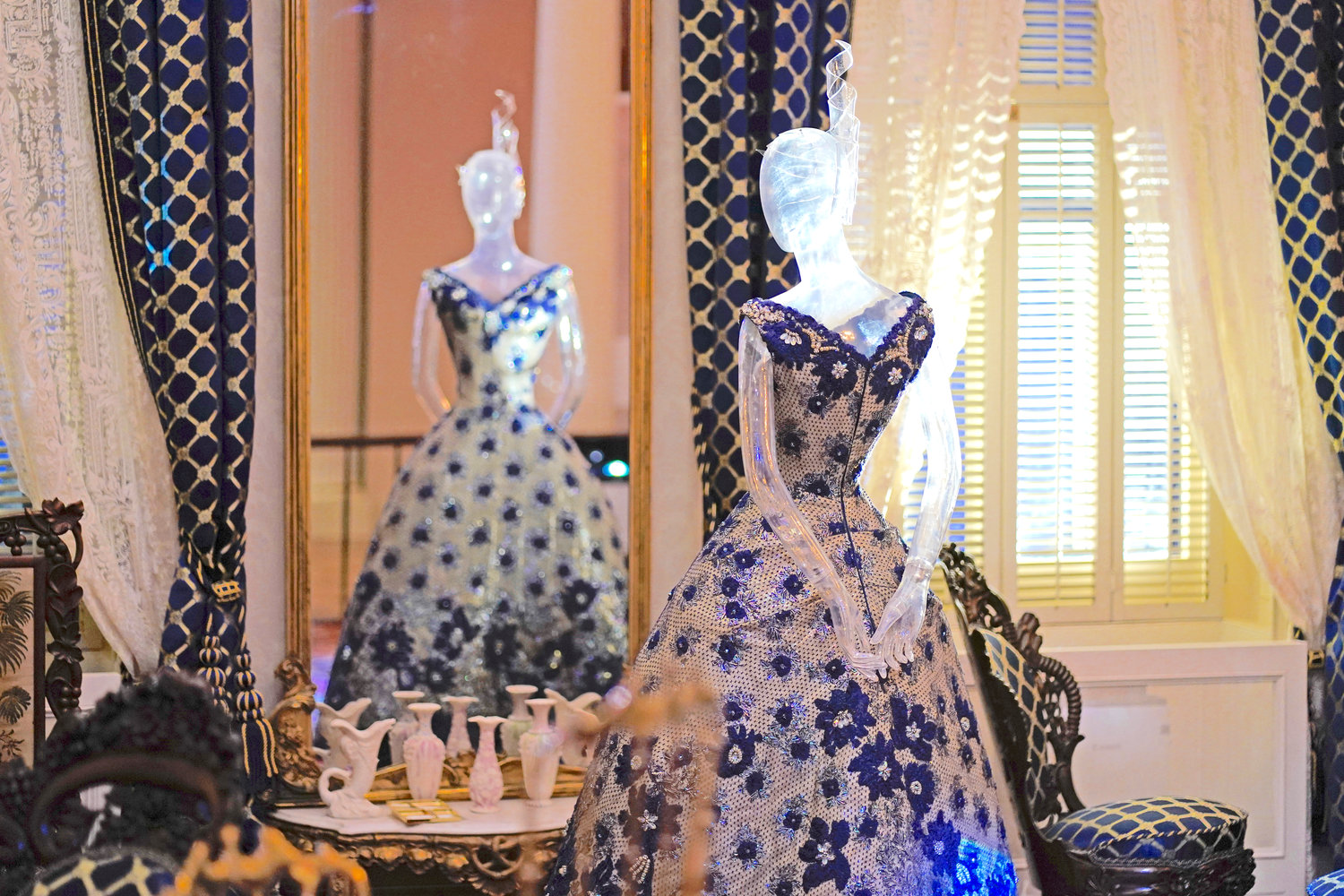 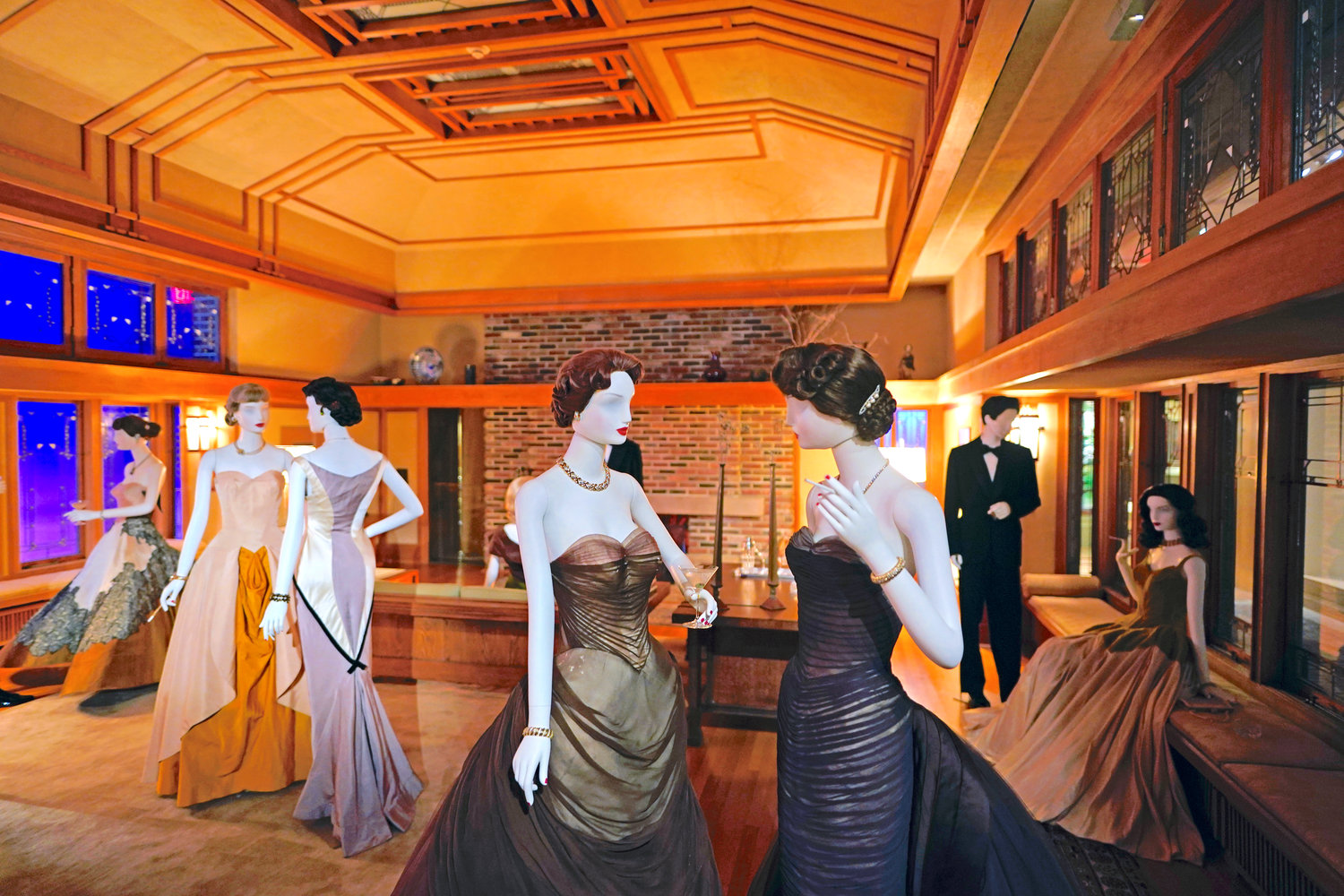 A scene staged by film director Martin Scorsese featuring fashions by designer Charles James and a room by architect Frank Lloyd Wright is displayed as part of the Met Museum Costume Institute’s exhibit “In America: A Lexicon of Fashion,” Saturday, April 30, in NYC.
(Photo by Charles Sykes/Invision/AP) 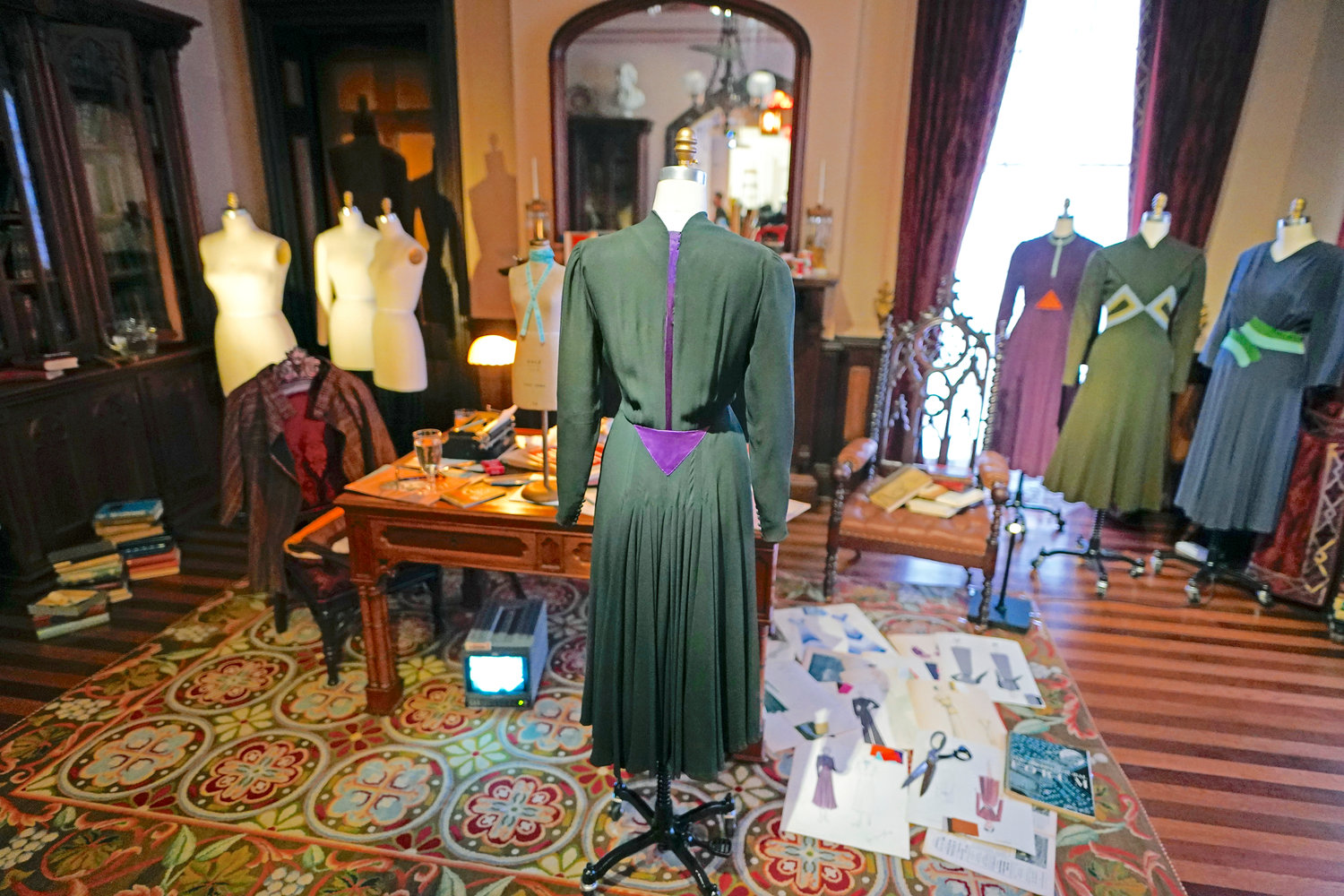 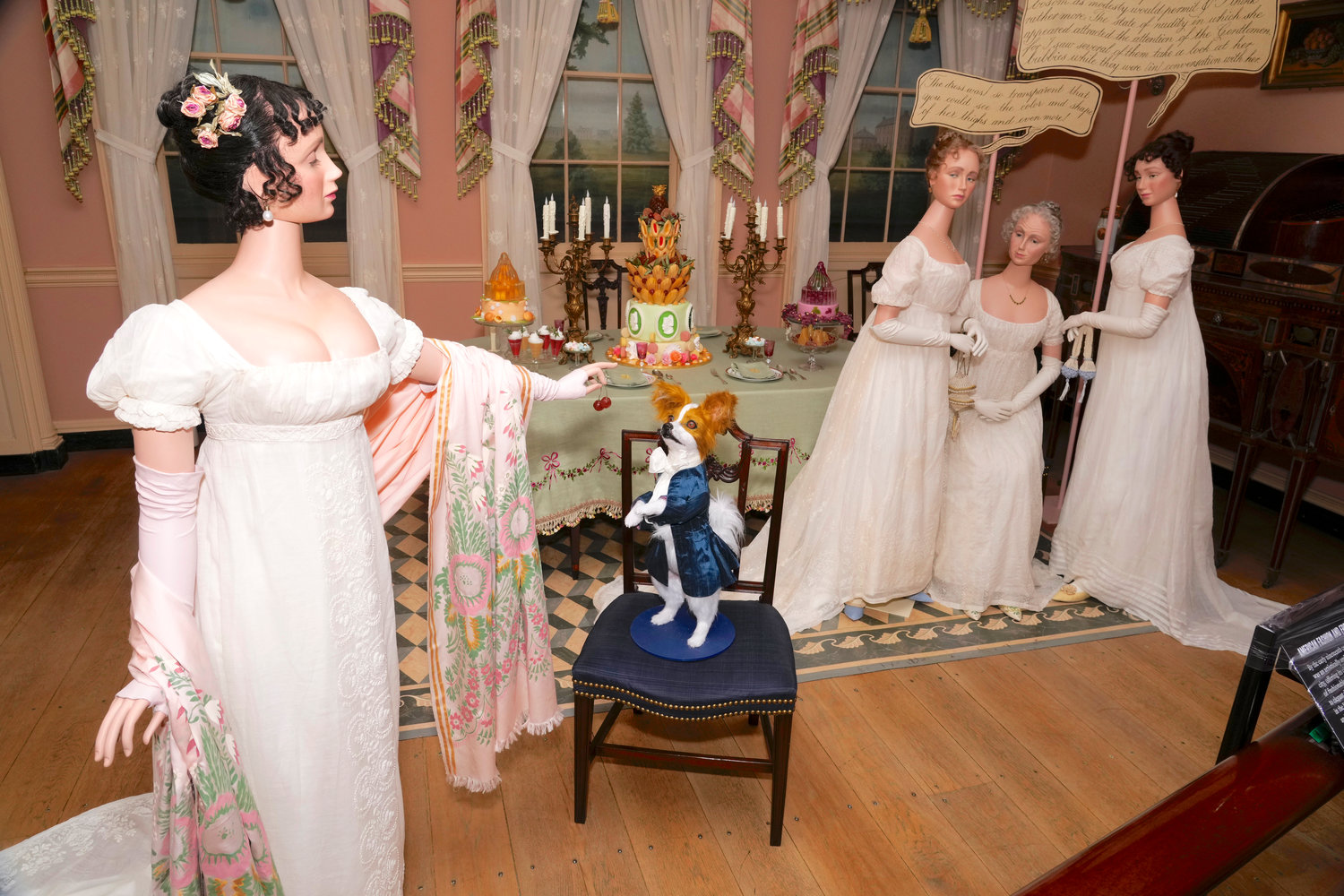 Even for a legendary film director like Martin Scorsese, the assignment was a daunting one. Take one of the famous American period rooms at the Metropolitan Museum of Art and make essentially a one-frame movie with no camera: a tableau, not a film, but using your cinematic sensibility. Your actors are mannequins, and the costumes have been chosen for you.

“Create a one-frame movie in a period room? A great opportunity and an intriguing challenge,” the director writes in a statement next to his creation, a mysterious mix of characters, emotions and fashion in the museum’s striking Frank Lloyd Wright Room.

Eight other directors, including Regina King and Chloé Zhao, are also putting their stamp on the period rooms, for “In America: An Anthology of Fashion,” the Met’s spring Costume Institute exhibit that launched with Monday’s Met Gala, and officially opening May 7. Guests at the gala, which raises millions for the self-funding institute and has become a major fashion and pop culture spectacle, were among the first see the displays.

The exhibit is the second part of a broader show on American fashion to mark the Costume Institute’s 75th anniversary. Masterminded as usual by star curator Andrew Bolton, the new installment is both sequel and precursor to “In America: A Lexicon of Fashion,” which opened last September and is focused more on contemporary designers and establishing what Bolton calls a vocabulary for fashion. (The shows will run concurrently and close together in September.)

If the new “Anthology” show is meant to provide crucial historical context, it also seeks to find untold stories and overlooked figures in early American fashion, especially female designers, and especially those of color. Many of their stories, Bolton said when announcing the show, “have been forgotten, overlooked, or relegated to a footnote in the annals of fashion history.”

For King, the Richmond Room, depicting early 19th-­century domestic life for wealthy Virginians, provided a chance to highlight Black designer Fannie Criss Payne, who was born in the late 1860s to formerly enslaved parents and became a top local dressmaker. She was known for stitching a name tape into her garments to “sign” her work — part of an emerging sense of clothes-making as a creative endeavor.

King says she was looking “to portray the power and strength Fannie Criss Payne exudes through her awe-inspiring story and exquisite clothing,” placing her in a prosperous working situation — and proudly wearing her own design — fitting a client, and employing another Black woman as a seamstress.

Filmmaker Blank looks at Maria Hollander, founder of a clothing business in the mid-19th century in Massachusetts who used her business success to advocate for abolition and women’s rights. In the museum’s Shaker Retiring Room, director Zhao connects with the minimalist aesthetic of 1930s sportswear designer Claire McCardell.

De Wilde uses her set in the Baltimore Dining Room to examine the influence of European fashion on American women — including some disapproving American attitudes about those low-cut gowns from Paris. Dash focuses on Black dressmaker Ann Lowe, who designed future first lady Jackie Kennedy’s wedding dress but was barely recognized for it. “The designer was shrouded in secrecy,” writes Dash. “Invisibility was the cloak she wore, and yet she persisted.”

In the wing’s Gothic Revival Library, Bravo looks at the works of Elizabeth Hawes, a mid-20th century designer and fashion writer. And Coppola, given the McKim, Mead & White Stair Hall and another room, writes that she at first wasn’t sure what to do: ”How do you stage a scene without actors or a story?” She ultimately teamed with sculptor Rachel Feinstein to create distinctive faces for her “characters.”

Each filmmaker reached into their own bag of tricks. For Scorsese, the fashions he was given were designed by the brilliant couturier Charles James — the subject of his own Costume Exhibit (and Met Gala) in 2014. Scorsese knew he needed to create a story “that could be felt across the length of that room.” He turned to 1940s Technicolor films and used John Stah’s “Leave Her to Heaven,” what he calls “a true Technicolor noir.”

“In America: An Anthology of Fashion” opens to the public May 7. Part one, “In America: A Lexicon of Fashion,” remains open at the Anna Wintour Costume Center. Both close in September.

Sure to be a talker is the display in the museum’s Versailles room, so known for its panoramic circular view of Versailles painted by John Vanderlyn between 1818 and 1819.

Ford transforms the room into a depiction of the “Battle of Versailles” — not a military conflict but the name given to a major night for American fashion in 1973, when five American sportswear designers (including Oscar de la Renta and Anne Klein) “faced off” against five French couture designers at a show in Versailles and showed the world what American fashion was made of.

In his tableau, Ford decided to make it a real battle with warring mannequins, many dressed in ensembles from that pivotal show. “The weapons have changed,” Ford writes. “In place of fans and feather boas are fencing foils and front kicks.”