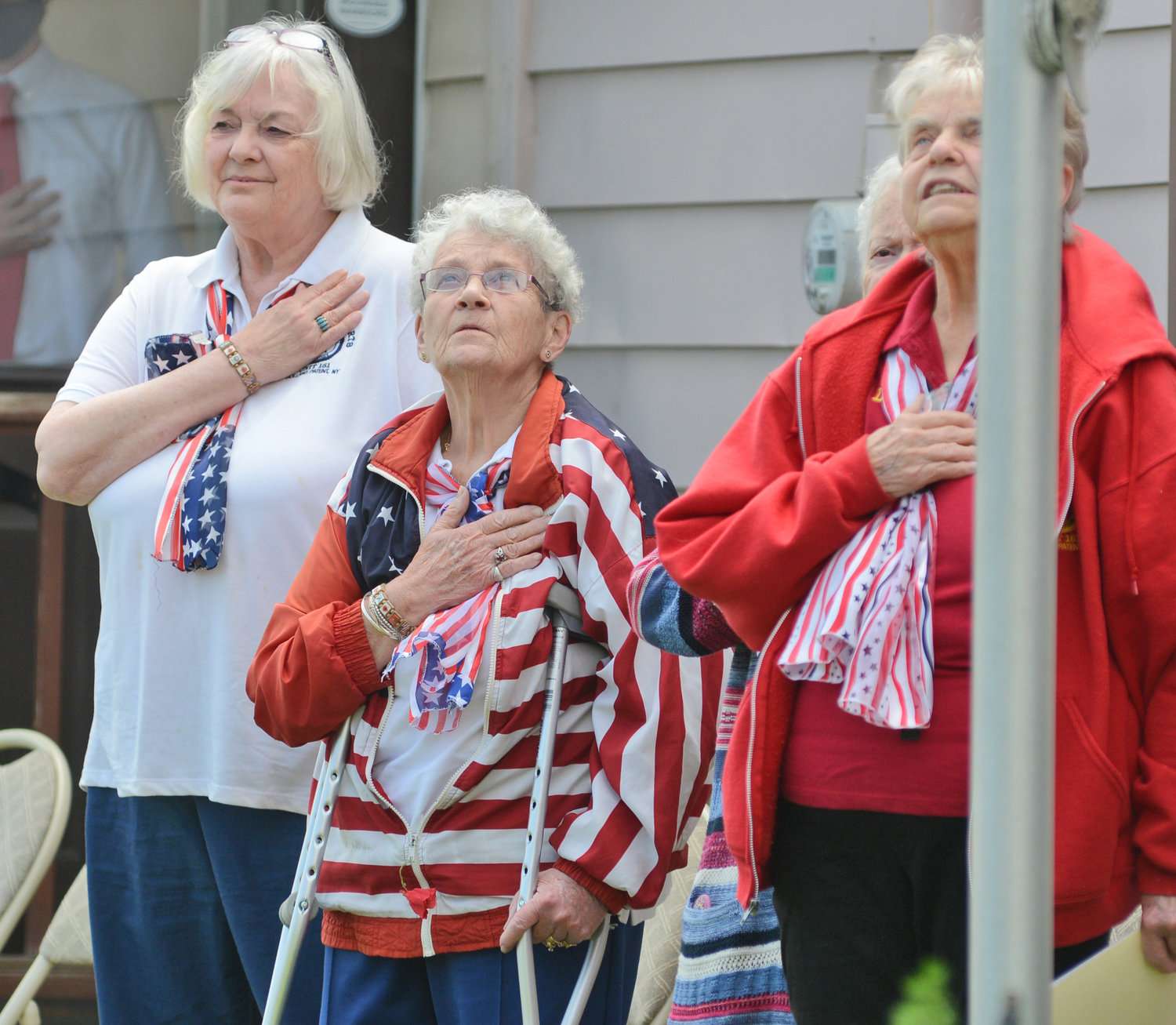 Nancy Tuttle, Cathy Gates and Debbie Roberts during the National Anthem at the Leon Roberts Legion Post in 2021.
(Sentinel photo by John Clifford)
Posted Sunday, May 29, 2022 7:00 am

Memorial Day is a day to remember, a day to reflect, to pay tribute to those many Americans who paid the ultimate price for our great way of life.

The following parades and services will take place on Memorial Day, Monday, May 30:

Boonville – The Boonville Charles J. Love (DSC) Post #406 American Legion will be hosting Memorial Day services in conjunction with the Harland J. Hennessey Post #5538 Veterans of Foreign Wars (VFW) and the Tun Tavern Leathernecks Detachment #961 Marine Corps League. The first service will get underway at 9 a.m. at the Veteran’s Memorial Forest located on Route 294 between Boonville and West Leyden. From there, they will go to the Ava Cemetery for a 9:30 a.m. service. At 11 a.m. there will be a brief service and wreaths placed on the monument honoring departed comrades at the Veterans’ monument at the top of the Boonville Cemetery. Immediately following, the final service will take place at the base of the cemetery hill at the Memorial Monument honoring Boonville residents who were killed during wartime. All veterans are encouraged to participate in any or all activities.

Camden – The parade steps off at 10 a.m. at the Camden United Methodist Church, heading south down Main Street and continue to Freedom Park for the Memorial Day service.

Canastota – The parade will begin at 10 a.m. at the intersection of Wilson Avenue and N. Peterboro Street (State Route 13) and proceed south on Peterboro Street through the village, ending at Clark Park, near the intersection with State Route 5. A public ceremony honoring members of the community who gave their lives in service to our county will take place immediately following the conclusion of the parade.

Forestport – The Remsen VFW, Forestport Firefighters and Forestport Town officials will host a Memorial Day service at the Memorial Park in the hamlet of Forestport at 9 a.m. The VFW members will then travel to Hinckley for a 10 a.m. service.

Holland Patent – The parade begins at 10 a.m. at the Holland Patent Middle School on Elm Street and proceeds to Main Street and Park Avenue for a wreath laying at the Village Park. After that, the parade continues down Park Avenue to Depot Street, concluding at the American Legion Roberts Post 161 where a ceremony will take place with special guest Vice Admiral Ron Boxall.

Lowville – The parade will start at 11 a.m. at the Ford Garage on State Street and end at Veterans Park. A wreath will be placed at the Soldiers and Sailors Monument and Veterans Park. After the parade, the Marine Corps Commandant will give a short address followed by the rendering of full military honors to the deceased. The public is encouraged to stop at the American Legion, VFW, and the Marine Corps League following the event.

New Hartford – The parade begins at 7 p.m. in the New Hartford Shopping Center and will proceed north on Genesee Street to Pearl Street, over Pearl to Sanger Avenue to Oxford Road. The New Hartford Fire Department’s Open House and Memorial Service will immediately follow the parade at the fire station. There will be no parking on the parade route. Parking is available on the side streets, church and village parking lots.

Old Forge – The parade will begin at 10 a.m. at the post office. Laying of the wreaths will take place at the high school, fire house, American Legion and the cemetery. Lunch will be served at the firehouse.

Utica – The annual Memorial Day parade and wreath laying will begin at 10 a.m. on Genesee Street in front of St. Elizabeth Hospital and proceed north on Genesee Street and then east on the Parkway, ending at the Parkway Recreation Center. At the conclusion of the parade, American Legion Post 229 will conduct its annual wreath laying at the Soldiers & Sailors/Oneida Square Monument, the Oneida County Vietnam Monument, the
POW/MIA Monument, the Spanish American Monument, World War I/World War II/Korean War Monument, Utica’s Purple Heart Monument, the Honoring All Veterans Monument and the Gold Star Mothers Monument located at Utica’s Main Post Office. Centro Bus will provide transportation. All residents who are not walking in the parade are encouraged to participate as spectators.