For the sixth consecutive year, Rome residents can expect a 0% real property tax increase in the proposed $48,967,418 city budget for 2023. 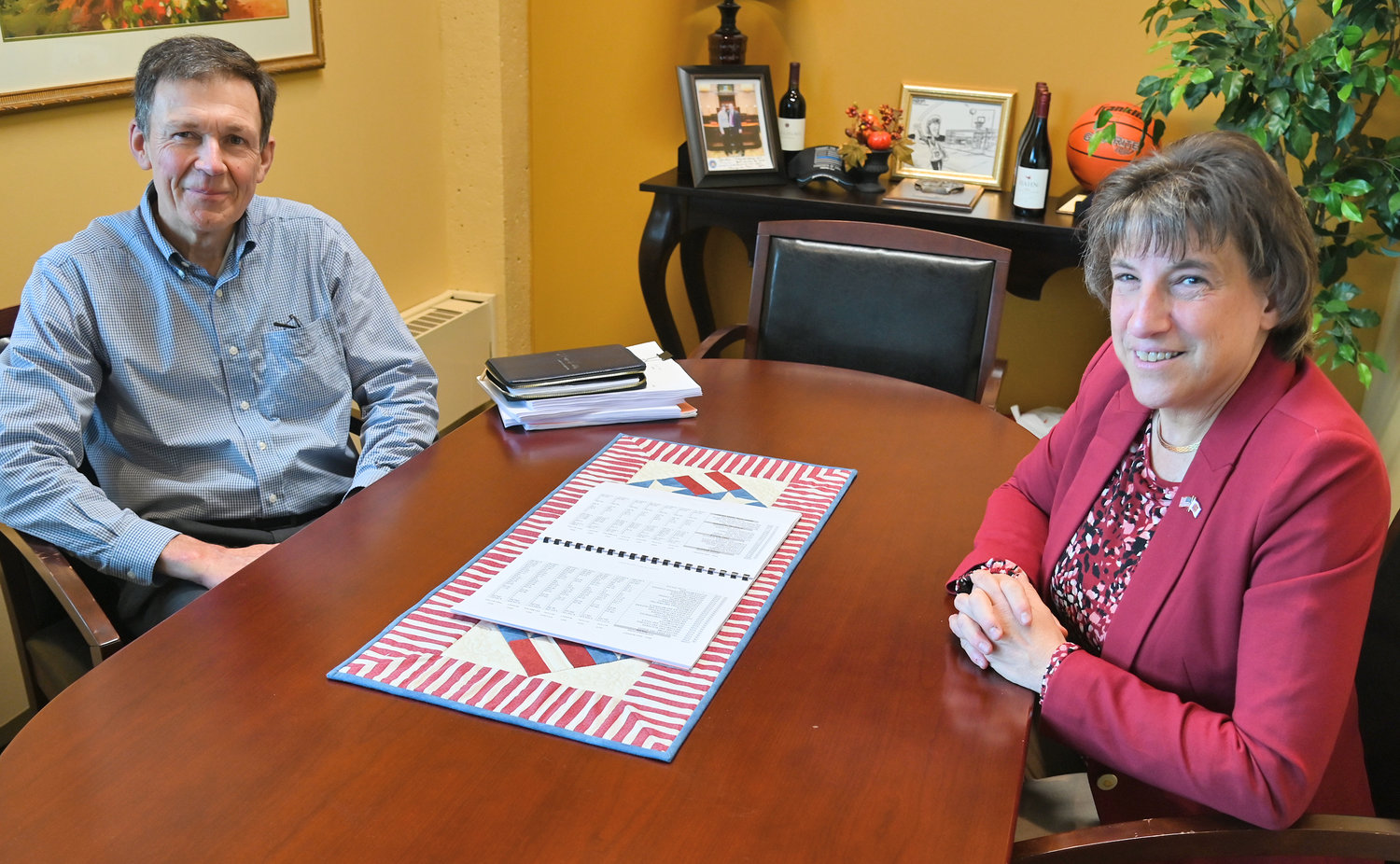 Rome Mayor Jacqueline M. Izzo, right, goes over her administration’s 2023 budget proposal with City Treasurer Dave Nolan in her office on Tuesday prior to her delivering her annual budget presentation at a special meeting of the Common Council on Wednesday, Sept. 28.
(Sentinel photo by John Clifford)
Posted Thursday, September 29, 2022 7:43 am
Nicole A. Hawley
Staff writer
email / twitter

ROME — For the sixth consecutive year, Rome residents can expect a 0% real property tax increase in the proposed $48,967,418 city budget for 2023, which once again calls for no increases in refuse, water and sewer rates.

The proposed budget, which focuses on improving quality of life for residents and maintaining city services, was presented by Mayor Jacqueline M. Izzo and her administration during a special meeting of the Common Council on Wednesday.

Izzo said assessed values within the city and tax revenues are up, with increases expected to continue in 2023. Assessed values have consistently increased — the track record of her seven-year administration, the mayor said.

“Even after a number of tax certiorari cases, our assessed values have continued to increase, which is a good sign after settling these cases,” she said. “We’re about $3 million up in assessments.”

As for the $3,260,183 increase in spending, Izzo said it’s largely due to increases in salaries and wages for personnel with New York raising the minimum wage. According to the Economic Policy Institute, current minimum wage in Upstate New York is $13.20 per hour, with proposed legislation that would raise the rate to $14.20 per hour in 2023. The mayor said the city is currently in negotiations with unions, with contracts expiring at the end of the year.

While It’s a challenge to compete with the private sector, “no one can compete with us as far as health insurance and benefits” offered to workers, Izzo said.

The 2023 proposed budget also includes a number of changes in some city departments.

The city Department of Community and Economic Development is currently working on 40 grant projects with more to come, Izzo said, necessitating an additional staff member.

“We’re adding a third professional planner,” she said. “We don’t want to lose grants that we are applying for or upcoming grant opportunities for community development.”

In the city’s Engineering Department, the salary and grade classification for Engineer I is being re-adjusted, and another engineer will also be upgraded to help keep up with growing infrastructure work within the city, Izzo said.

“We also hope to bolster our Animal Control office,” the mayor added. “Another area affected by the termination of eviction notices has been the abundance of abandoned dogs. Our local rescues and humane societies have been at maximum capacities. This office works seven days a week, 365 days a year, with people out at all hours.”

In the Electrical Department, a second electrical technician position is being added as duties in all facilities continue to increase beyond traditional traffic control lights, including at the Wastewater Treatment Plant and bio-digester, Izzo said. There will also be an addition of two maintenance positions and an assistant chief operator position. The city is also moving from a part-time to full-time purchasing agent.

Izzo commended the city’s relationship with Enterprise Fleet Management as the supply chain continues to be problematic, especially with no government pricing by manufacturers for vehicles.

“They (Enterprise) have the power to go out to market” for specialized vehicles, such as suburbans requiring certain equipment for the police department, Izzo explained.

Supply and demand “will continue to be problematic in the foreseeable future,” she added.

In addition to a $50,000 grant recently received in state funding from Assemblywoman Marianne Buttenschon, D-119, Marcy, Izzo said the city is proposing to invest an additional $20,000, for a total investment of $70,000 to turn Kennedy Arena into a multi-use facility that can be accessed throughout the year. New in-depth sports flooring and basketball courts will be added for spring and summer use of the building.

Izzo said there are almost 40 youth basketball teams interested in coming to play at Kennedy Arena, and that will open revenue opportunities for local hotels and businesses when hosting tournaments.

“There’s plenty of parking there and it’s a really nice venue,” the mayor said.

Funding has also been slated for the rehabilitation of the walking trail at Haselton Park to make it connect with the Mohawk River Trail at Chestnut Street. Phase I of rehabilitation at the park was performed this year to Field 1, with new light poles and LED lighting added. Work at Field 2 will begin next year.

The Fort Stanwix Garage will also be demolished next year and be transformed into a surface lot — part of the city’s 2023 capital plan.

“This budget does a good job in supplying equipment needed by our departments for public service that the community is used to receiving and deserves for their quality of life,” Izzo said. “Quality of life Is important because you can build your residential and business strategies, but you still need things to offer to the people — there’s certain things people are looking for in an urban setting.”