The Oneida Indian Nation has announced plans for the largest expansion and financial reinvestment at Turning Stone Resort Casino in the last 20 years. 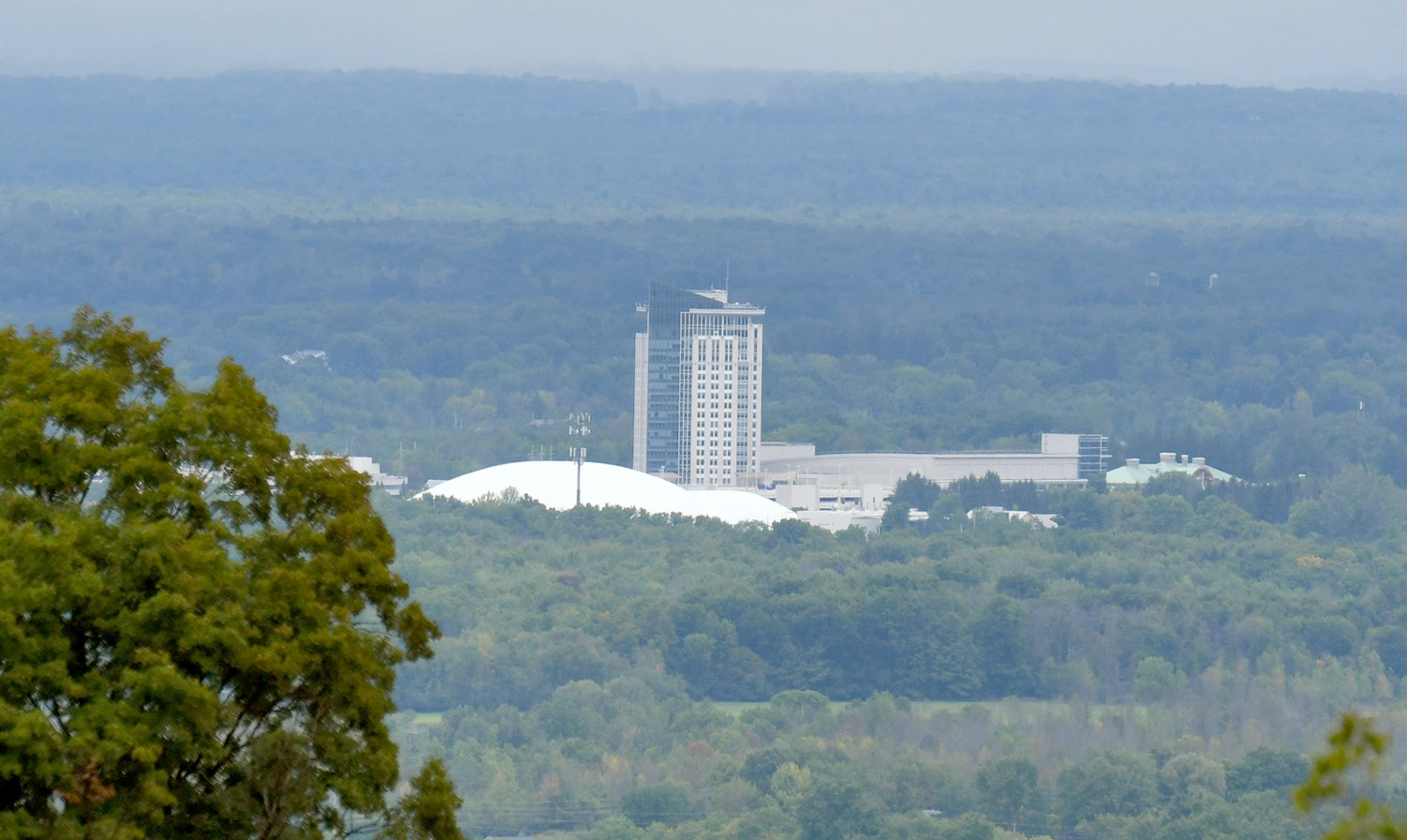 The Turning Stone Resort Casino with its iconic Tower Hotel rises up in this view from Peterboro Road in Oneida. Officials say a massive expansion at the resort, the largest in 20 years, will nearly double its convention and meeting space and also include a new hotel.
(Sentinel photo by John Clifford) 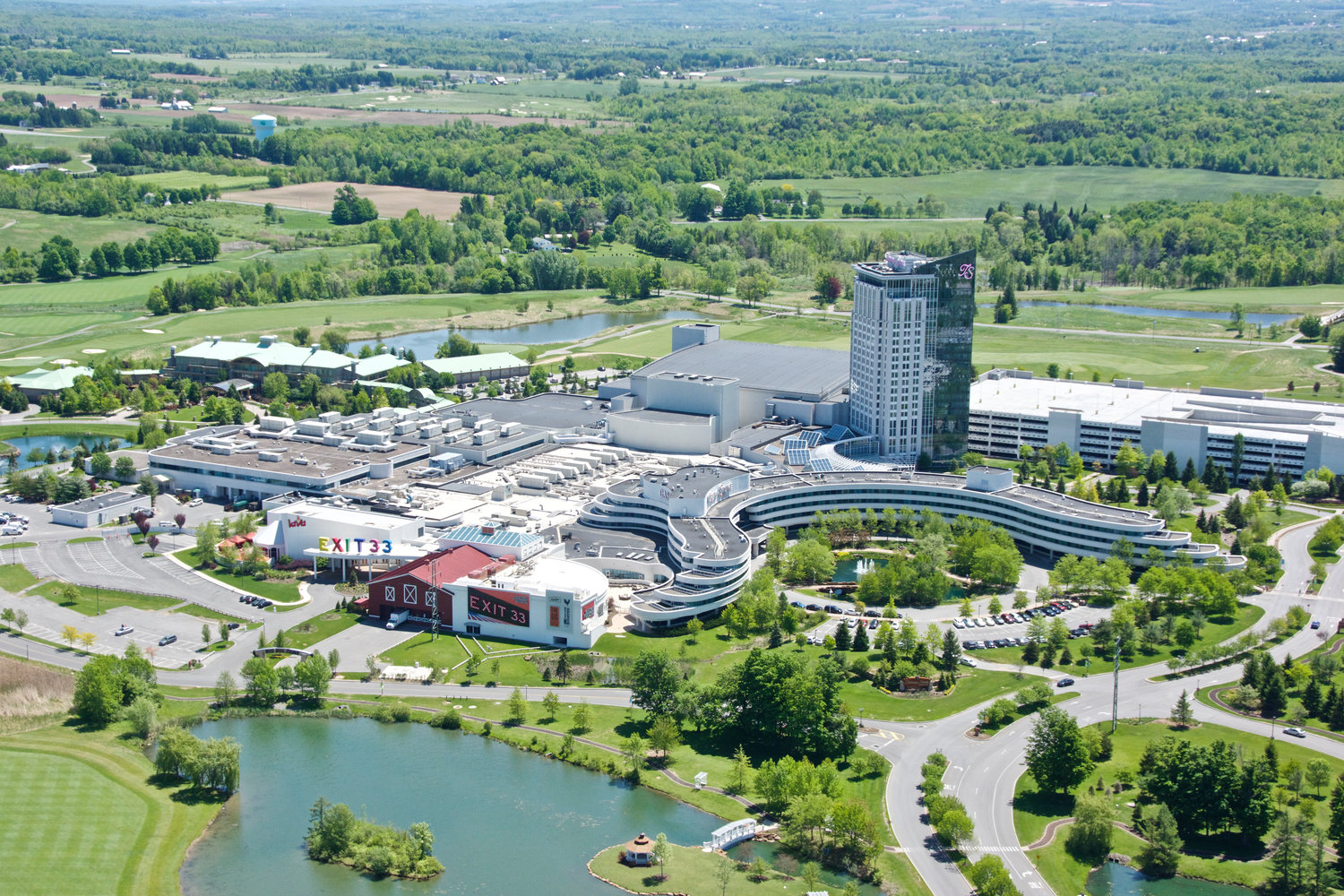 The Turning Stone Resort Casino is shown in this undated aerial photo. The Oneida Indian Nation has announced a major multi-year expansion to the operation which is expected, when complete, to add hundreds of new permanent jobs.
(Photo courtesy Oneida Indian Nation) 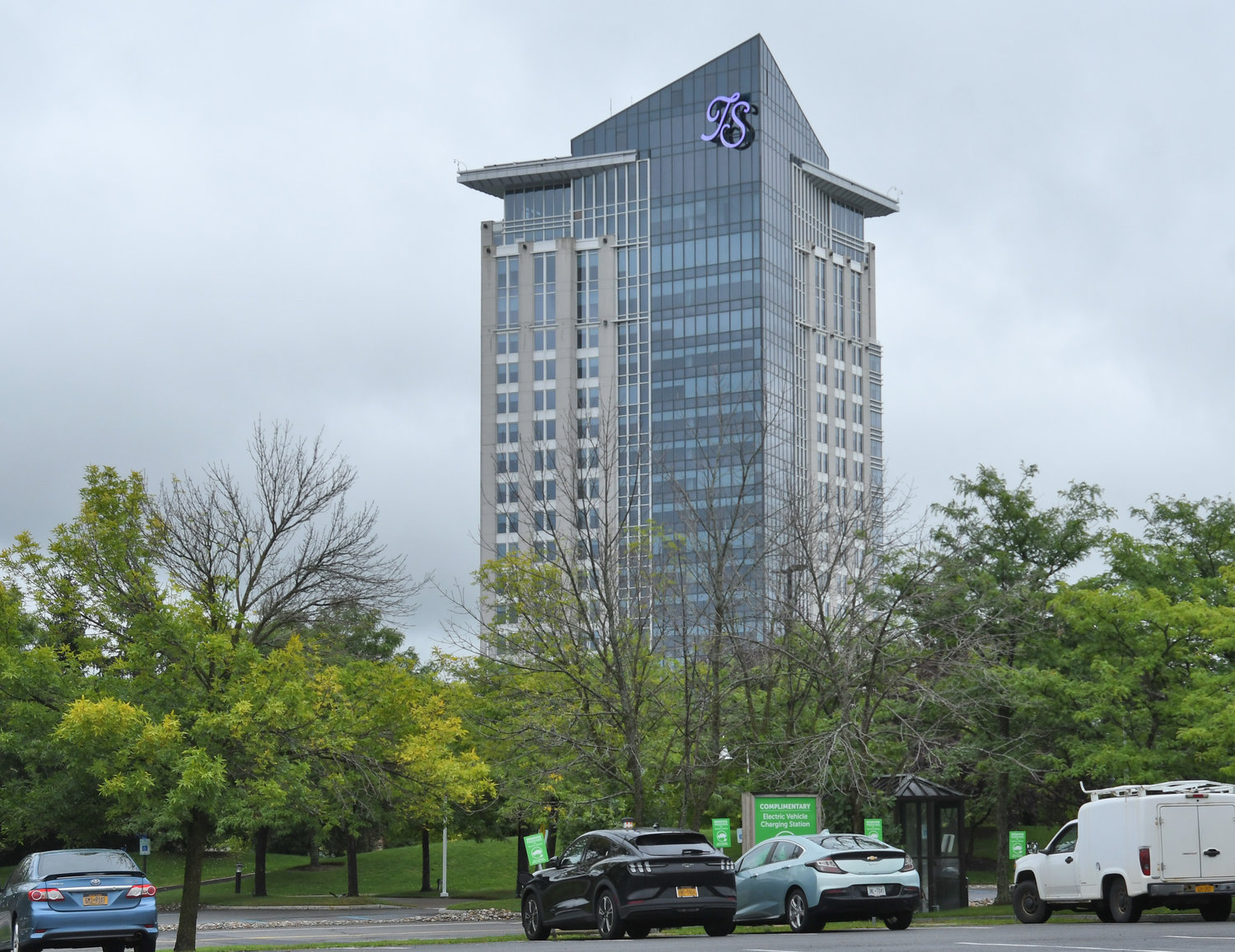 Plans for a second hotel, similar in room size to the Turning Stone Resort Casino’s Tower Hotel, shown Tuesday, have been announced by the Oneida Indian Nation. In addition to the approximately 250 guest room facility, new dining options, outdoor spaces and additional amenities are planned.
(Sentinel photo by John Clifford) 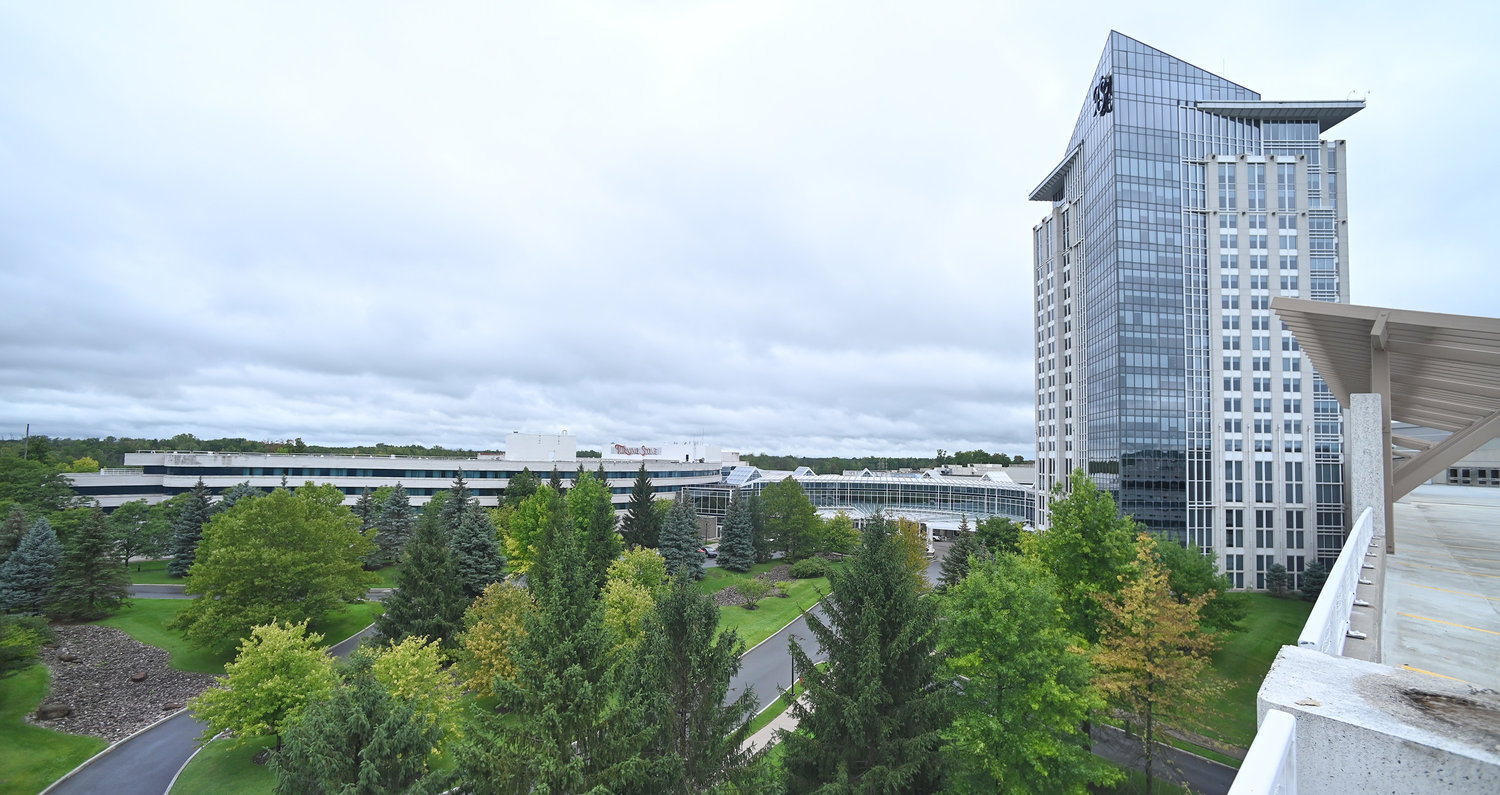 The Turning Stone Casino will see its biggest expansion in 20 years with additions to its convention and meeting space and a new hotel on the property. Pictured is the Turning Stone's iconic Tower Hotel. The new hotel will roughly be the same size as the Tower Hotel, with approximately 250 guest rooms, as well as new dining options, outdoor spaces and additional amenities.
(Sentinel photo by John Clifford)
Previous Next
Posted Tuesday, September 6, 2022 10:11 pm

VERONA — The Oneida Indian Nation has announced plans for the largest expansion and financial reinvestment at Turning Stone Resort Casino in the last 20 years.

The multi-year project will nearly double the existing convention and meeting space at the resort and include a new hotel — roughly the same size as the Tower Hotel with approximately 250 guest rooms — as well as new dining options, outdoor spaces and additional amenities. Ground-breaking is expected to take place in 2023 on the multi-year project.

The construction is projected to infuse millions of dollars into the region’s economy, particularly with local businesses and vendors. The Oneida Indian Nation has selected Syracuse-based Hayner Hoyt as the general contractor and will also utilize Central New York trade unions, creating hundreds of local construction jobs, officials said.

The expansion is expected to add hundreds of new permanent jobs once completed as the additions will help attract even more regional and national events from across the country, further increasing tourism to the region, the announcement said.

Officials said the Oneida Indian Nation has invested more than $1 billion in Central New York over the past three decades.

“As we begin our largest reinvestment in two decades, we embark upon a new chapter for our enterprises, ensuring that we remain one of the top event and tourism destinations in New York for decades to come,” said Ray Halbritter, Oneida Indian Nation Representative and Oneida Nation Enterprises CEO.

“Today we are experiencing record demand for hosting conferences and other events at Turning Stone that far outpaces our current hotel and convention facilities,” Halbritter said.

“This extensive multi-year expansion project will help us meet this rising need and even greater demand in the future.

Our 30-year track record has proven that investments like this are essential to sustain the growth and success of our enterprises and the entire region,” he added.

The Oneida Indian Nation has selected the architecture and design firm Gensler as its development partner for the expansion. Gensler serves more than 3,500 clients with 52 locations around the world. Gensler has been the lead designer and architect for other leading destinations, including City Center in Las Vegas, Gaylord National Hotel and Convention Center in Washington and Walt Disney World’s Swan Reserve.

“Gensler is thrilled to partner with the Oneida Indian Nation on its expansion of Turning Stone Resort Casino,” said Lester Yuen, Design Director for Gensler. “This expansion will introduce some game-changing features to this incredible property, and we are very excited to add this expansion to our portfolio of world-class hospitality and convention projects.”

“As one of the largest employers and key contributors for investments that bring millions of visitors to Central New York every year, the Oneida Indian Nation has been a critical driver in the economic development of Oneida County,” said Oneida County Executive Anthony J. Picente Jr.

“This latest investment at Turning Stone Resort Casino – the largest in 20 years – expands on this partnership and, along with the Nexus Center, continues our shared goal for the revitalization of Oneida County,” Picente said. “We know that when the Oneida Indian Nation does well, Oneida County does well, and the expansion of Turning Stone will help grow this success with increased tourism, new jobs, and more.”

“The partnership between the Oneida Indian Nation and the town of Verona has played an important role in our mutual growth and success, “said Verona Town Supervisor Scott Musacchio. “Recently, this partnership helped provide water and sewer infrastructure for the Oneida Indian Nation’s new employee housing, an innovative approach to increasing affordable housing and growing jobs within our community.”

“Turning Stone’s expansion will continue this partnership, injecting significant investment into our local economy, and further establishing Verona as a world-class destination for tourism, conventions, and more,” Musacchio added.

“At a time when many businesses are postponing or canceling investments, the Oneida Indian Nation is moving forward yet again with a major expansion at Turning Stone that will create good-paying jobs for hundreds of our members and support the continued growth of our region,” said President of the Central/Northern Building Trades Greg Lancette. “Our motto has always been that if the Oneida Indian Nation can dream it, we can build it. We are honored to once again play a part in bringing these dreams to reality. “

“We see this large-scale development as a positive for area businesses who are looking for meeting and convention venues, as well as for those in search of world-class recreational activity,” DiMeo said. “We are happy to call the Oneida Indian Nation our partners and neighbors in ensuring that our region generates revenue, recreation, and overall community impact for years to come.”

“For the last three decades, the Oneida Indian Nation has been an exemplary partner, focused on increasing tourism for the region and committed to investing in its workforce and surrounding communities,” said Rob Simpson, president of CenterState CEO. “This historic expansion of convention space and hotel rooms at Turning Stone continues this exceptional commitment, and will attract even more businesses and tourists from around the country to Upstate New York.”