Many Utica Comets players are on Devils’ Prospects Challenge roster

It is hockey season again. Many NHL teams are gathering their prospects ahead of main training camp to give them a little bit of a head start on the 2022-23 season.

Many Utica Comets players are on Devils’ Prospects Challenge roster 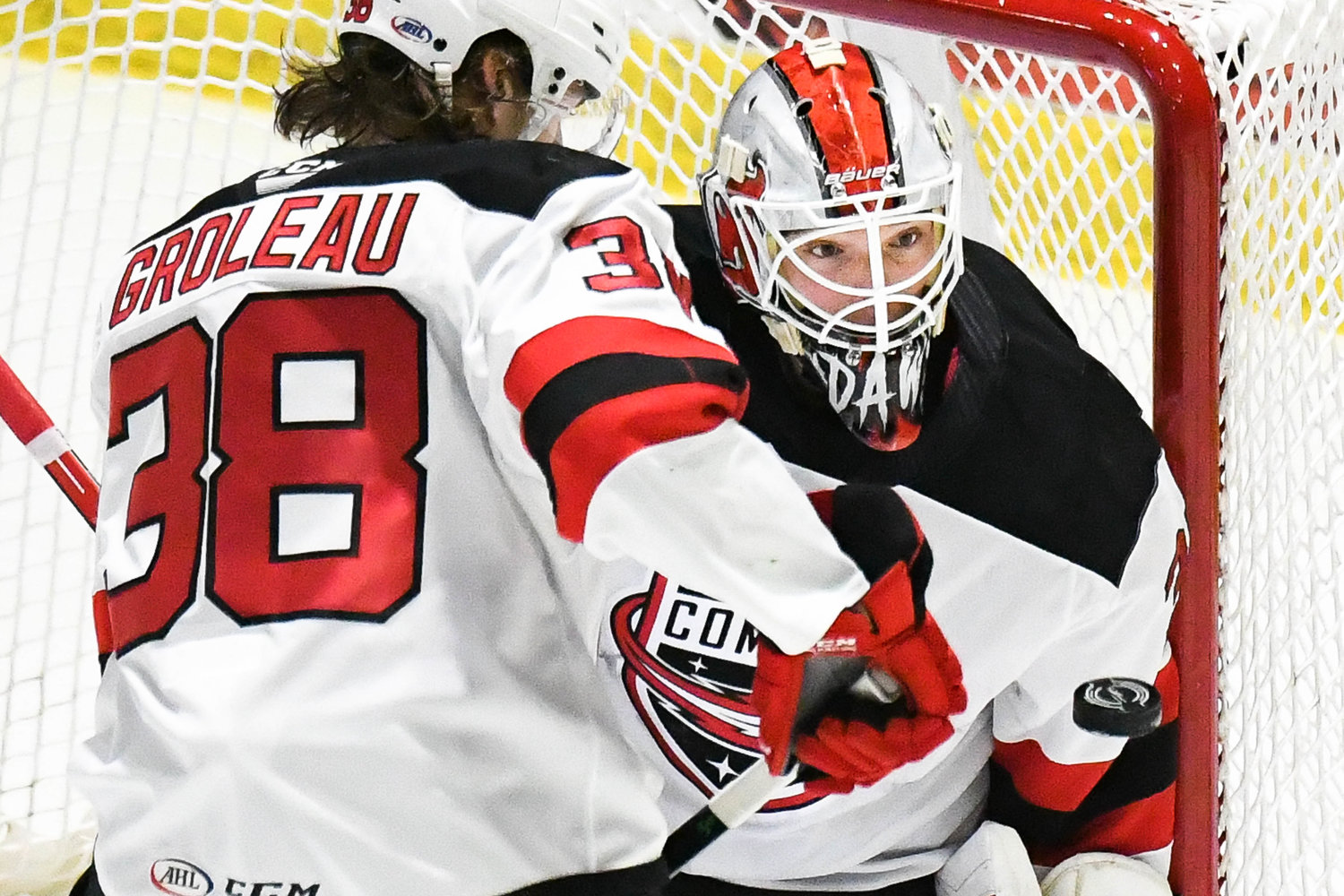 Nico Daws and Jeremy Groleau are among the players to spend time with the Utica Comets last season that are part of the parent New Jersey Devils’ rookie tournament team this weekend in Buffalo. It is likely both will see time with the Comets during the 2022-23 season.
(Sentinel file photo by Alex Cooper)
Posted Thursday, September 15, 2022 9:00 pm
Ben Birnell
Sports writer
email / twitter

It is hockey season again.

Many NHL teams are gathering their prospects ahead of main training camp to give them a little bit of a head start on the 2022-23 season.

For the New Jersey Devils, the Utica Comets’ affiliate, that includes participating in the Prospects Challenge, which begins Friday and goes through Monday at Harborcenter in Buffalo.

The Devils join the Buffalo Sabres (AHL Rochester), Boston Bruins (Providence), Montreal Canadiens (Laval), Ottawa Senators (Belleville) and Pittsburgh Penguins (Wilkes-Barre/Scranton) as the participating teams. New Jersey is scheduled to play in three games. All games will be streamed on newjerseydevils.com, according to the Devils.

The Devils’ 28-man roster includes numerous players who either played with the Comets during the team’s 2021-22 season and/or will see time in Utica this campaign. The prospect teams are usually led by the AHL team’s coaching staff.

Kevin Dineen is beginning his second season as Comets head coach and is joined by assistants Ryan Parent and Andrew Brewer, who was recently added to the staff. Clinton native Josh Gagnon is also back with the team as video coach.

Perhaps the most notable player on the Devils’ Prospects roster is Alex Holtz, the 2020 seventh overall draft pick, who was a top wing for the Comets as a rookie last season. His skill and talent helped him stand out. He had many highlight-worthy moments while leading the team with 26 goals.

He will battle for one of the few forward spots on the Devils’ 23-man squad to begin the regular-season. Training camp for the Devils opens next week in New Jersey. Roster decisions are made by New Jersey officials.

Notably, Holtz’s friend and standout forward Fabian Zetterlund and Tyce Thompson are not on the prospects roster. Young goaltender Mareks Mitens — signed to an AHL deal — wasn’t among the four goalies on the roster.

Holtz is among four first-round draft picks along with Nolan Foote and Chase Stillman, who didn’t suit up with Utica at the end of last season due to an undisclosed issue. The other first-round pick is defenseman Simon Nemec, the second overall selection in this year’s draft. New Jersey officials have said Nemec could see time with Utica this season.

Holtz and Foote are also among a small group of players to spend time with Utica and New Jersey last season. The others are physical defensemen Kevin Bahl and Nikita Okhotiuk, Reilly Walsh — who was forced out of the Comets’ playoff series against Rochester last spring due to appendicitis surgery — and goaltenders Nico Daws and Akira Schmid. Both goaltenders are expected to start the season with Utica, according to team officials.

Bahl, Foote and defenseman Jeremy Groleau are the assistant captains for the Devils during the weekend event, the team said.

Van Wyhe, Parent, Corson, Gourley, Bratt and Poulter are among 14 players signed to AHL deals with Utica for the upcoming season. The team is set to begin training camp in early October in Utica.

The Comets have a pair of preseason games scheduled the first weekend of October ahead of their 10th regular-season.

Utica is slated to open the season on Saturday, Oct. 15, at Hershey with the home opener Monday, Oct. 17, against Wilkes-Barre/Scranton.

Theme nights: A look at the Utica Comets' 2022-23 promotional schedule