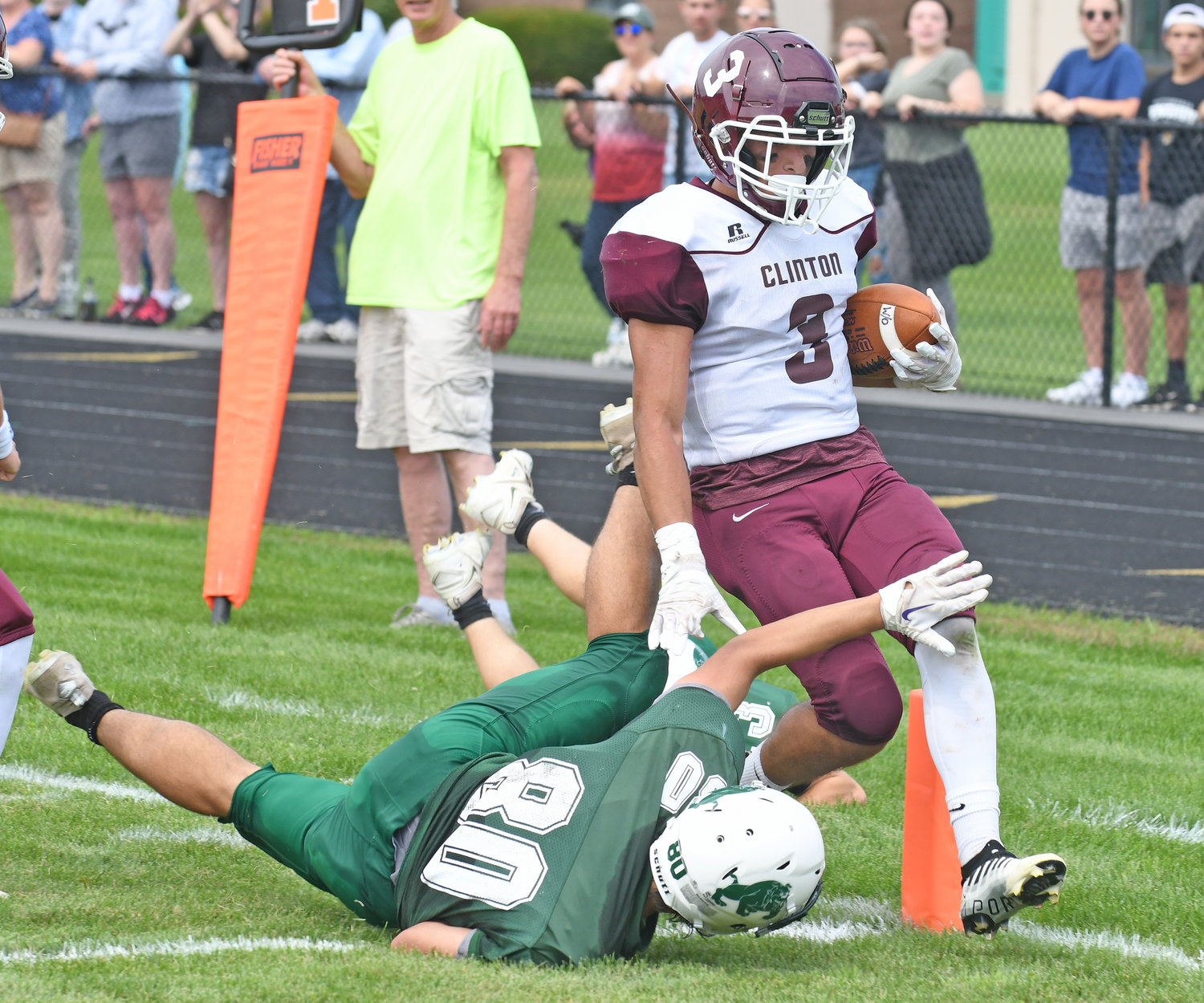 Clinton senior Cameron Maline crosses the goal line to score a touchdown on a 58-yard punt return in the second quarter during Saturday afternoon’s non-league game against host Westmoreland/Oriskany. Westmoreland’s Gino Marangi tries to make a play at the goal line. The Warriors won 28-6.
(Sentinel photo by John Clifford) 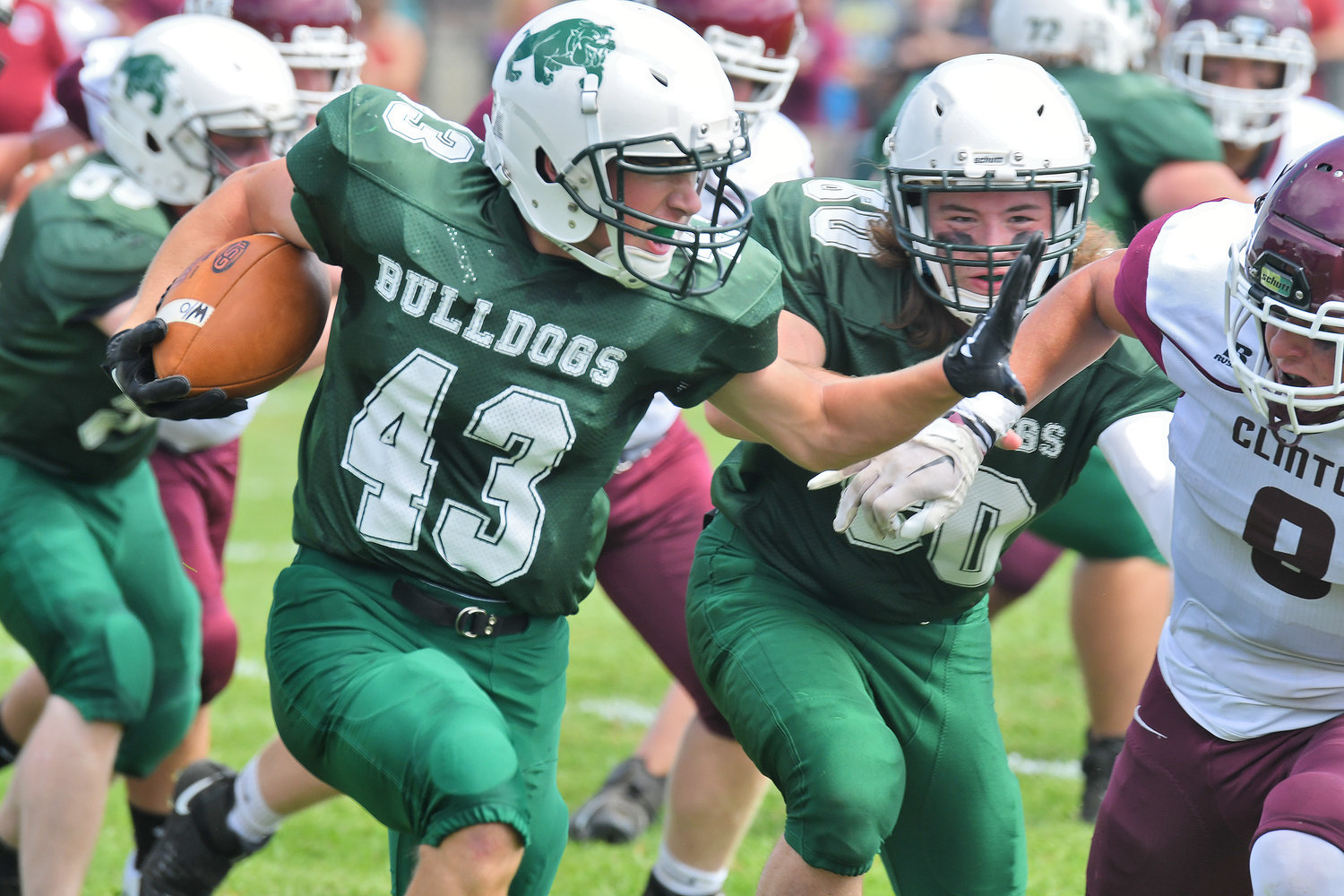 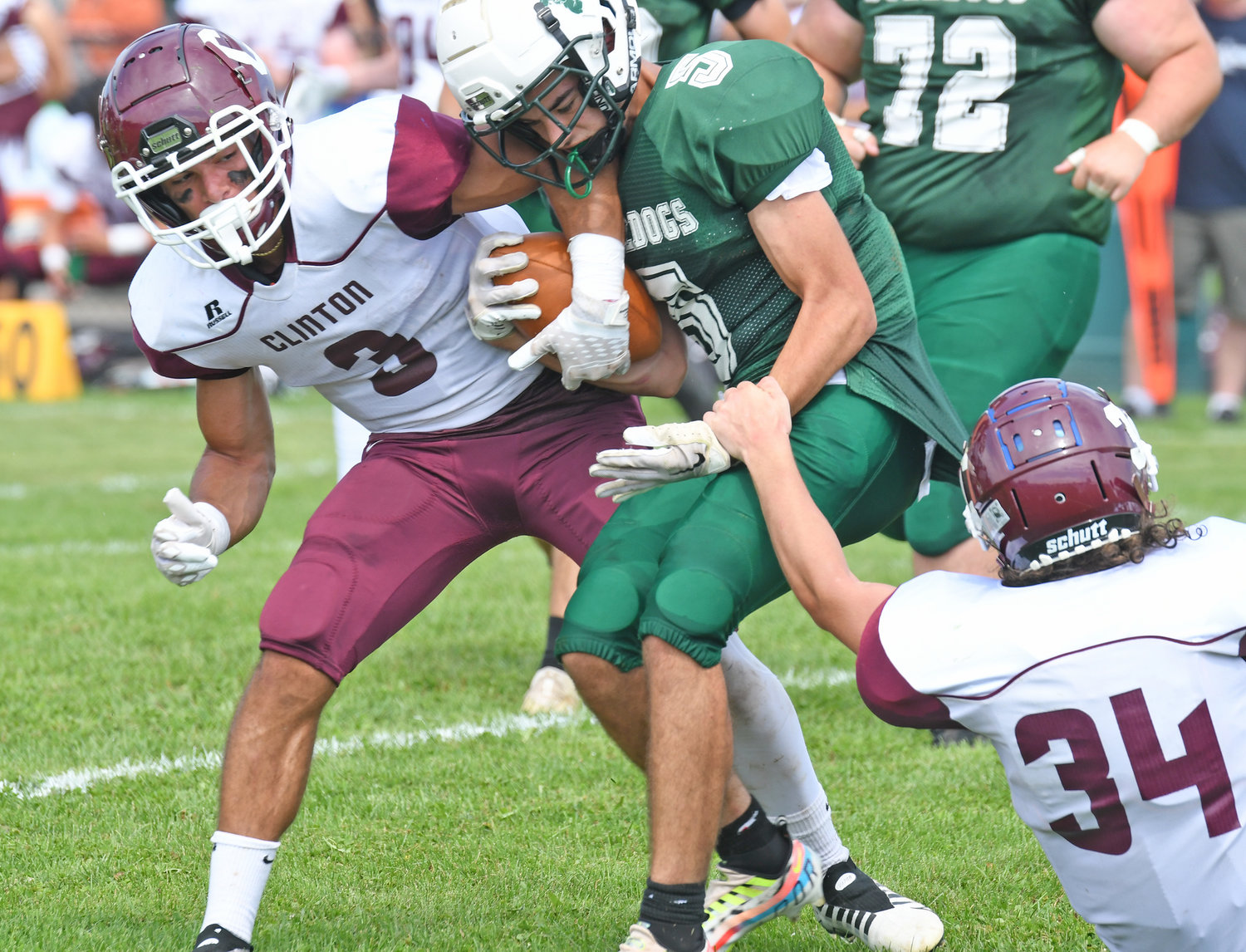 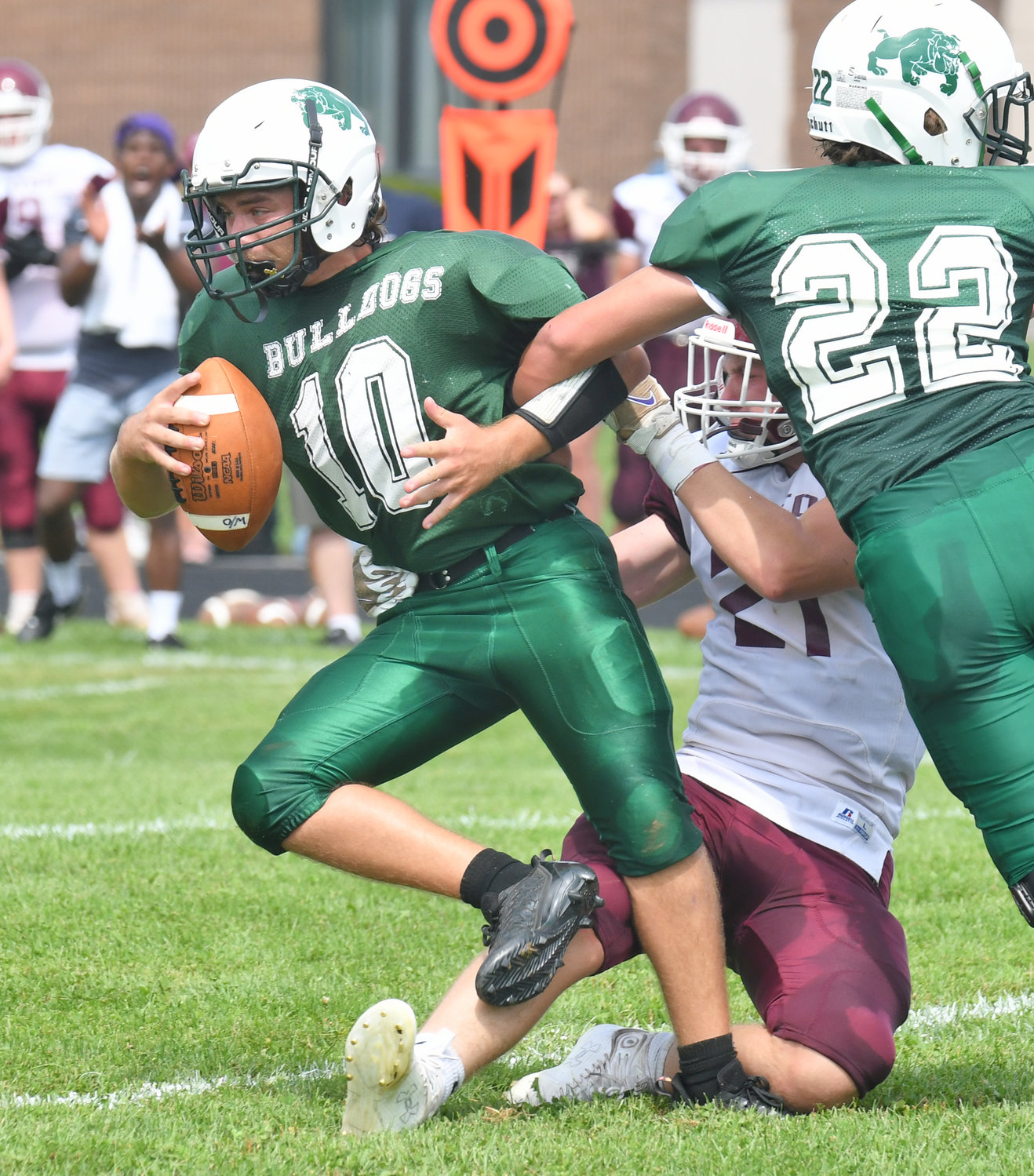 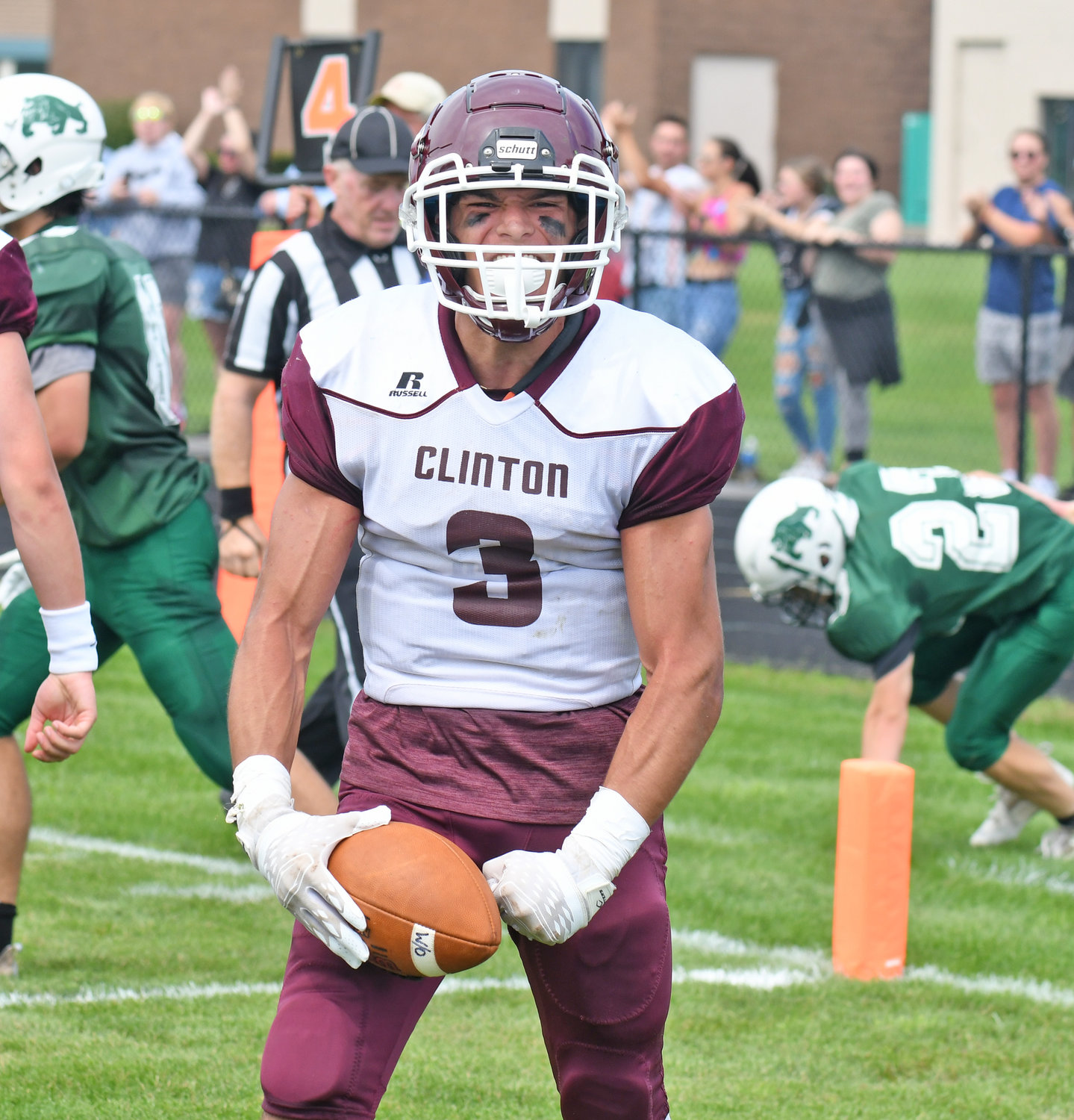 Clinton senior Cameron Maline expresses himself after scoring a touchdown on a punt return in the second quarter during Saturday afternoon's non-league game against host Westmoreland/Oriskany. The Warriors won 28-6.
(Sentinel photo by John Clifford) 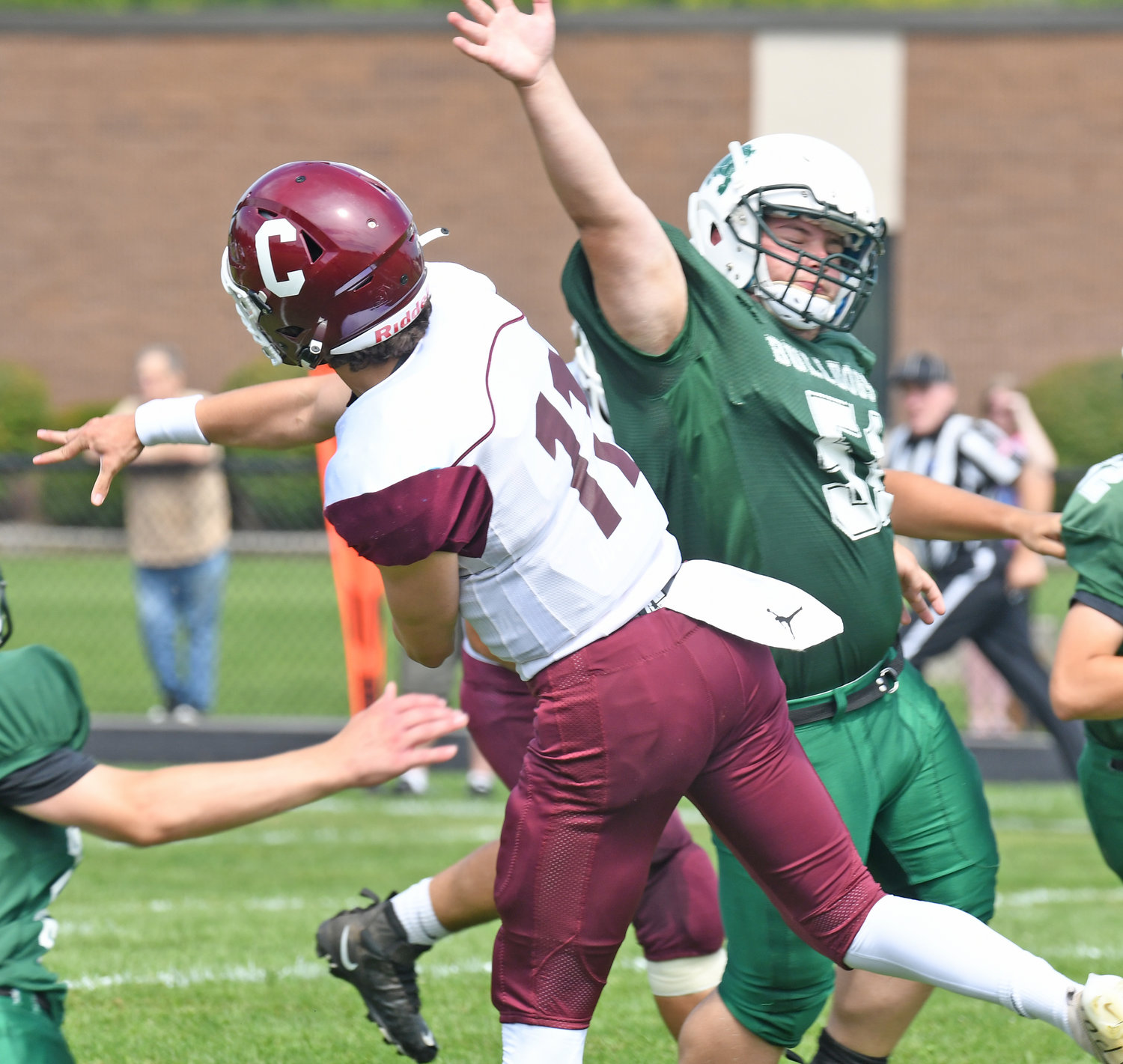 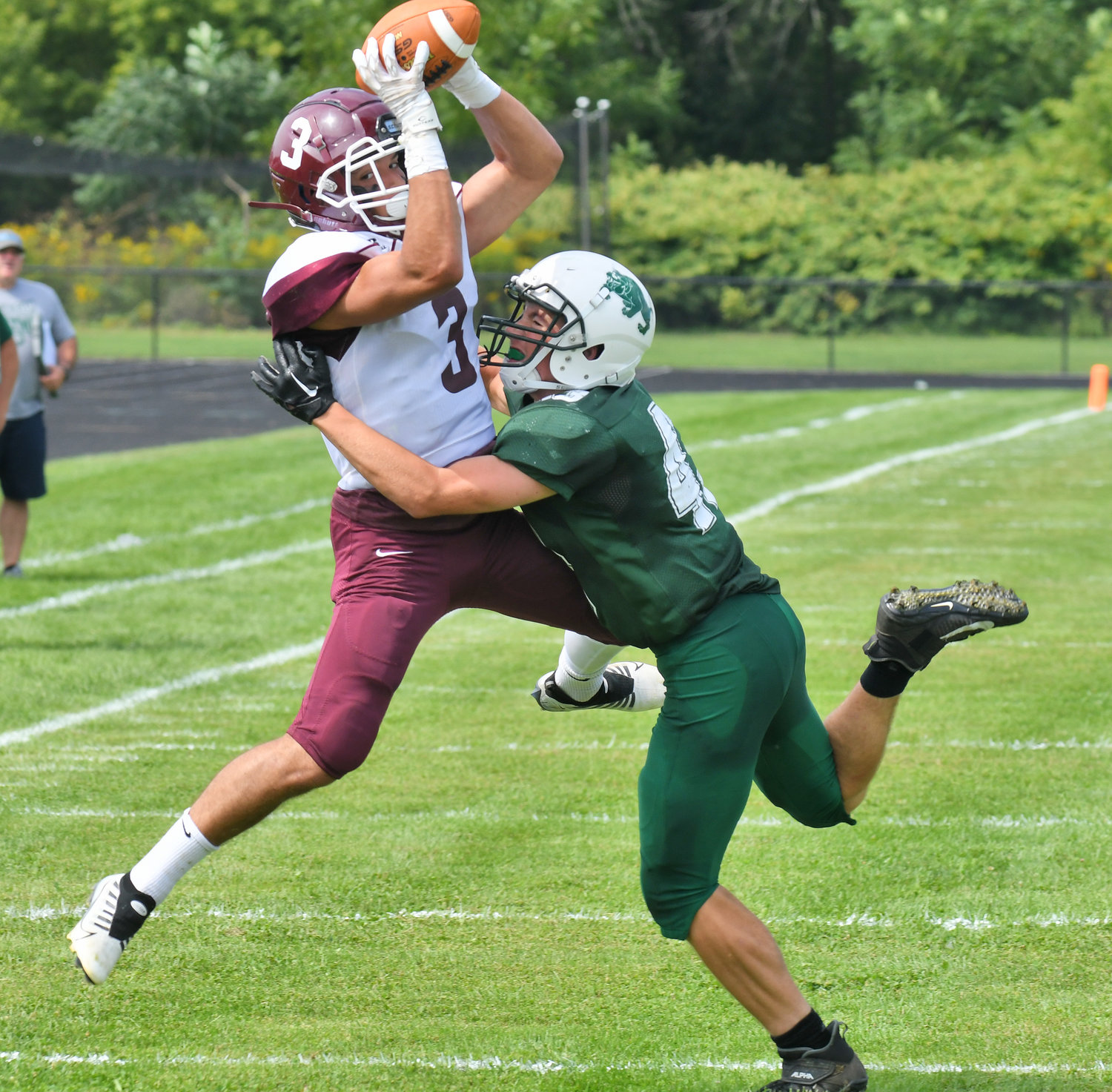 Clinton's Cameron Maline catches the ball with Westmoreland/Oriskany's Jack Williams defending in the first half during Saturday afternoon's non-league game in Westmoreland. The Warriors won 28-6.
(Sentinel photo by John Clifford) 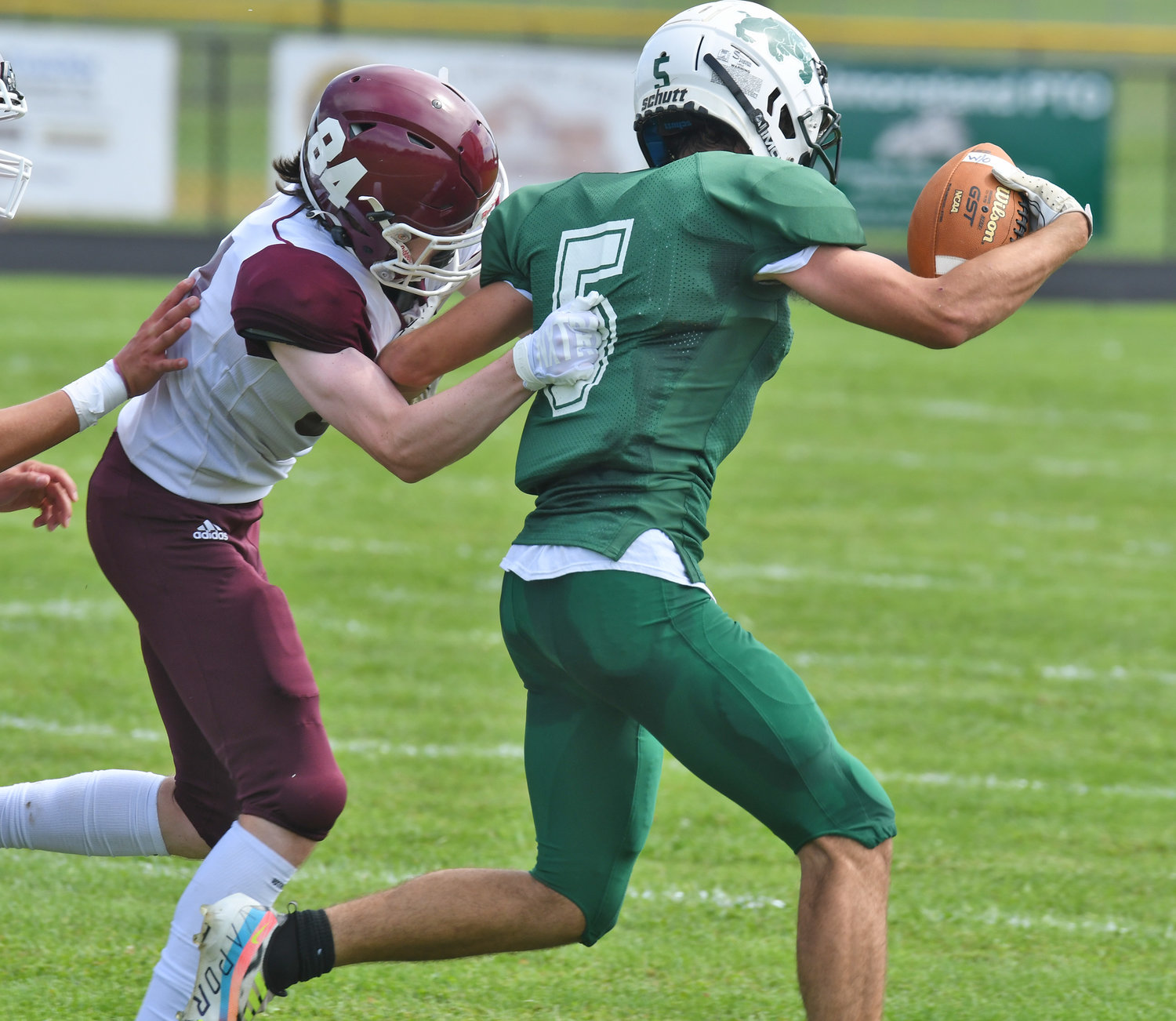 The 5-foot-10, 170-pound Maline, a running back/wide receiver/defensive back, scored on touchdown receptions of 45 and 7 yards from senior quarterback Ryan Chmielewski in the first and second quarter respectively, had a 58-yard punt return for a score right before halftime and added a 42-yard touchdown run in the fourth quarter to seal the victory in the week zero game.

“Our team chemistry was the key,” Maline said. “The play calling by (Clinton) coach A (Jason Alexander) and the blocking by the line, gave Ryan (Chmielewski) a lot of time to throw and me a lot of time to run.”

Maline rushed for 103 yards on just six carries, had five receptions for 96 yards and led the Warriors defensively with 10 tackles.

The two teams last met in the spring of 2021, with the Bulldogs winning a tight one 7-0 at Waterville High School.

Clinton jumped out quickly in this meeting after a three-and-out by the Bulldogs to start the game. Chmielewski and Maline hooked up for a 45-yard touchdown pass on their first offensive play from scrimmage. Senior Aiden Wilcox converted the first of four point after touchdown kicks to make it 7-0.

After an 11-play drive by the Bulldogs stalled at the Clinton 44-yard-line and ended with a punt, the Warriors marched 69 yards on nine plays capped off by a 7-yard touchdown pass play from Chmielewski to Maline to increase their advantage to 14-0.

Chmielewski finished the game 7-for-16 passing for 154 yards, two touchdowns and two interceptions. He also had two carries for 18 yards.

In the waning seconds of the first half, Maline took a Bulldogs’ punt from junior Gino Marangi off a bounce, reversed course and sprinted down the left side into the end zone to give the Warriors a 21-0 halftime lead.

“I let it bounce. Got my head upfield and went,” Maline said. “All my blockers did a great job and gave me room to run.”

The Bulldogs, who were playing their first game in Class C after playing an independent schedule in Class D last season, didn’t quit. They forced four Clinton turnovers — a pair of fumbles and a pair of interceptions — in the third quarter. Seniors Mitchell Holmes and Jase Smith each had fumble recoveries for the Bulldogs, while Marangi and sophomore Cameron Rautenstrauch each had an interception. Smith led the Bulldogs defensively with nine tackles, while junior Jack Williams added six tackles.

After Smith’s fumble recovery at the Clinton 12-yard-line, three plays later Westmoreland/Oriskany senior quarterback Michael Scalise scored on a 3-yard keeper to cut the deficit to 21-6 with 4:54 remaining in the third quarter. The two-point conversion pass play failed.

The Bulldogs played without senior Payton Livingston, who broke his ankle in practice and is out indefinitely.

“We’re young. We only have nine seniors,” Gates said. “Losing him (Livingston) really hurts. He was going to be a Swiss army knife for us. Losing him hurt the locker room and hurt us coaches knowing that it’s his senior year. He was our leading tackler the last two years. We had five kids on our defense who have never played varsity football.”

“The defense got better as the game went on and in the second half we came out forcing turnovers,” Gates added. “They threw a couple of picks and our kids made some nice plays. We’ll take positives from it.”

Clinton put the game out of reach early in the fourth quarter as Maline culminated a four-play, 69-yard drive with a 42-yard touchdown run down the right side.

“We expected that we were going to make mistakes. I knew the key would be if we could respond to it and make adjustments, and I think we did a good job of that,” Clinton coach Jason Alexander said. “We had blown blocking assignments here and running the wrong route there. Our guys need to take responsibility. We know we need to protect the football.”

“Our defense was tough and stout,” Alexander added. “They were very disciplined all game and that was the key because they (Bulldogs) do a lot of different things and do them well. They’re a well-coached, good football team.”

The Warriors travel to Bishop Ludden at 6:30 on Friday night for a week one contest, while the Bulldogs visit Holland Patent at 6 on Saturday night.

“We will find positives and build on them because we don’t know any other way to do it around here,” Gates said. “We’re playing a Class C schedule and that’s tough. We know that, but there won’t be any quitting in the Bulldogs. That’s for sure.”

“We’ve never played a week zero game before,” Gates added. “We’ll look at the film and evaluate kids. It’s on me and our staff, which has tons of experience, to put the best group out there to perform.”

Nick Acevedo scored the first of his two touchdowns for HP when in the second quarter he recovered a blocked punt He later ran in a score from 18 yards out for a more traditional touchdown in the third quarter.

Between those TDs, Jordan Koenig had a 30-yard touchdown run and Zylynski threw another TD pass, this one to Jordan Carhart from 30 yards out.

Zylynski ended the night 5-of-7 passing for 65 yards and two scores well as leading the team in rushing with 114 yards on 11 carries. Koenig ran seven times for 91 yards.

Herkimer’s lone score came with just under two minutes left in the third quarter, a one-yard run by Nick Caruso.

Herkimer, 0-1, will travel to Dolgeville for a 1:30 p.m. start Saturday in a Class D East matchup.